Hello, my name is Tamás Gyermán. I've been interested in Sci-Fi since my childhood; I love spaceships, creatures and all kinds of fantasy stuff.

For this picture, I wanted to create a scene that showed a part of the world of the "Primaterans" - a civilization that prefers dark corners of the galaxy, hiding from their enemies until their armada is strong enough to destroy them.

The idea was to create huge, blue planet in a dust cloud, with a meteor field and ships.

This image was created from scratch. I didn't produce any concept sketches or use any kinds of references - I just used my imagination.

The starfield was the first thing that I created. It was built up of many smaller images and then I put the perspective lines over it (Fig.01).

The scene was split in three main parts: foreground, background and the middle region. I gave each part a different color specification.

After setting up the perspective lines, I started modeling the first ship (Fig.02). As you can see in the image, I used basic objects like cylinders and cubes, in combination with the Extrude function.

When creating ships, I always begin with the basic body form. Later on I create smaller things like the propulsion or the weapons. By using the Knife tool, I sliced new areas into existing polygon objects. This is a simple method to create a well detailed model and each of my ships was created in this way

After I'd finished all the models, I started to create the textures. I used three kinds of textures: Diffuse, Specular and Bump-maps. The Diffuse channel was a combination of a metal texture and a procedural cloud (to achieve a dirt-like looking metal). The Specular channel contained a colored version of the diffuse texture, which was smoother than the original texture and had no detailed parts, in comparison to the helmet (Fig.03).

I used a Main light (acting as the Sun) for the lighting setup and three Infinite lights with Sun Mode applied. Furthermore, there were also light sources in front and to the left and right sides of the ship (Fig.05).

The ships were rendered to PNG with the Alpha channel.In the render settings I used Global Illumination and Ambient Occlusion; GI was in the RAW file and AO in a different layer (Fig.06).

I used the dongle tool to delete the AO parts I didn't need and to brighten the window areas of the ship. The glow effect was hand drawn; it was just another layer that I put over the original ship's images and I drew it with an Alpha brush. The booster engines were done the same way.

After finishing the first ship in the final scene, I started to build up the composition. First of all I took a high-res globe and cloud picture and then I placed some fog over it, simply by combining the "visible light" (hand drawn fog) with some noise. Comets were also needed.

The nebula parts were added into the picture later on to highlight the ships from the background (Fig.07).

The globe was placed on the opposite side of the ship's direction and the sun beams were placed behind the globe. The atmosphere of the globe was done by simply drawing some areas with an Alpha brush. I then blurred out the globe's edges to achieve a more realistic atmosphere.

I had to do a lot of color corrections to get a more blueish / greenish globe surface.

I then duplicated the layer and lowered the intensity so that I could use it as a cloud layer. Then I duplicated it again and twisted it a little bit to get the clouds appearing on some other areas. Some areas were faded out to achieve a more realistic look (higher and lower cloud layers).

After this step, the image was half done. I then started to create some more ships. First I modeled two bigger ships, put them into position, rendered them and put them into the final image as a triangle formation. Then I duplicated some fighter ships and placed them on three different layers, blurring some of the ships out.

The fighter booster line was created by simply using Alpha brush, formed with the Smudge tool. I also used a "Spiral Formation" to get a better feel of the space among the ships. The ships on the left side were in the same formation, targeting the left arm of the Space Station. The rear part was an "expletive part" consisting of the comets, the base ship and the two "resource carriers". They were in a free position and are aiming at the meteors (Fig.08).

After this step, I created some clouds that were covering the ships and the atmosphere. The nebula parts were mixed with the clouds to create some new looking clouds (Fig.09). 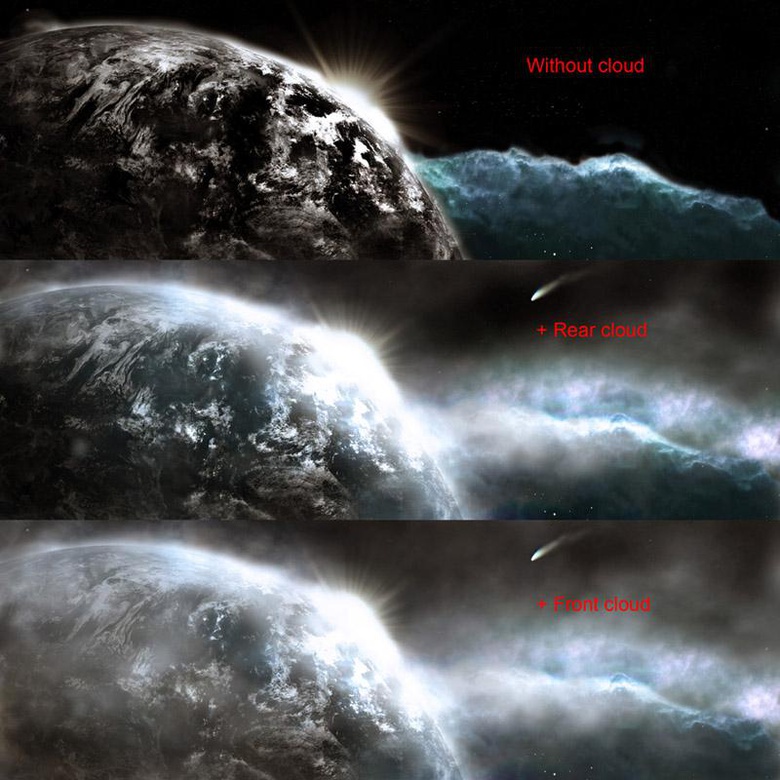 I used some correction layers to achieve the right environment colors and feelings (Fig.10). 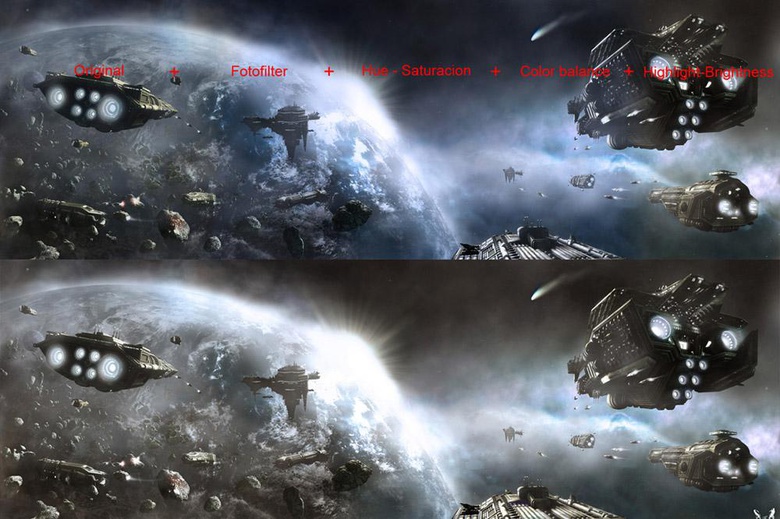 Finally I added a lens effect, my logo and the border (Fig.11).

A Few Words About This Picture

The ships you see in this picture are the ships of my nation, the Primaterans. In the future I'm going to create a similar battle scene, where I want to introduce the Primateran's ultimate enemy (Fig.12). 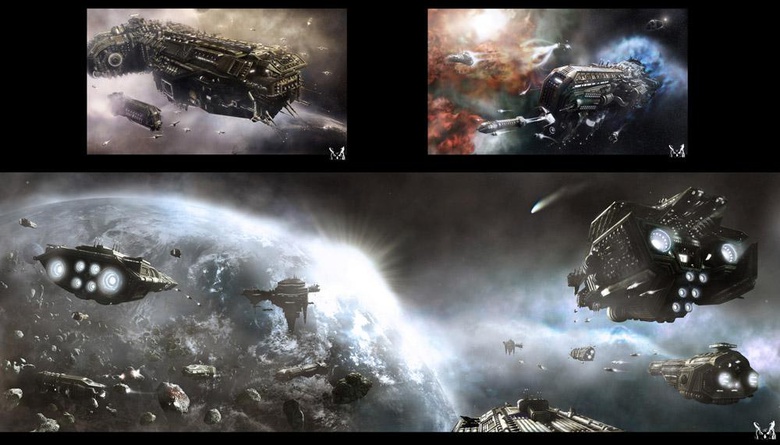 I want to say thanks to my team mate Dic4b from Alcatraz, for the better English version of this Making Of. Thank you for reading and I hope you found it interesting.