Making Of 'No Fishing'

Stephen Cooper demonstrates his unorthodox, but no less effective approach to texturing a 3D scene using the Total Textures collection. As opposed to UV mapping the geometry using the standard tools apparent in Maya, he rendered out the scene and then applied the textures in Photoshop using techniques akin to those employed by Matte painters. By using a combination of untextured render passes to generate the lighting he then crops and transforms the textures to "fit" the scene and sets the blending modes in order to preserve the lighting information evident in the 3d renders.

With this piece, I wanted to create a sense of vertigo looking down, but adjusting the focal length on the camera wasn't enough on its own to achieve what I had in mind. Â I found a useful tutorial on Highend3d which described how to fake a fisheye lens effect. Â Basically, you point a camera away from the scene but looking into its reflection on a sphere. Â The sphere then curves the scene in its reflection - in a similar way to how a fisheye lens works!

This scene was modelled completely in Maya. Â I used the extrude tool a lot, and the ornamental parts were made using the duplicate move option to create the spirals.Â  I created a curvy shape, and then duplicated it, moved it, then repeated it so that the parts overlapped each other in order to make an ornamental spiral structure.

The lighting for this piece was one directional light.Â  To create the shadow that covers the lower region of the image, I made an alpha texture with a gradient falloff and applied it to a plane. Â This was a huge poly that sat behind the camera, but in front of the light, in order to create a shadow with a soft edge. Â The red colouring as it falls off was later tweaked in Photoshop. Â Luckily the ambient occlusion and final gather created some nice bounce light and shadows which improved the overall ambience.

The scene was rendered with a white shader and Final Gather (Fig01). The Ambient Occlusion (AO) (Fig02) was then made a Multiply layer in Photoshop, ready for the texturing work to begin.

Using 3DTotal Textures I arranged the layers under the render and AO Multiply layers.Â  Basically, I looked at the area I needed to texture, then I looked through all the textures I had for elements that would fit the space, and then cut the texture out that I wanted to use and pasted it under all of the Multiply layers. Â I then used the Transform tool to make it fit perfectly to the area I wanted to texture. Â I could then turn the texture layer into a Multiply, Hard Light, Soft Light or Overlay layer to achieve specific effects. Â So I was really simply constructing the image as you would texture an actual 3D object within Maya, except I was doing it in Photoshop. Â So instead of making the textures beforehand, it could be done as necessary in PS. And instead of projecting the UV-mapping for every surface, I was simulating the process in PS where necessary.

This process took a lot of my time; it involved a lot of chopping up textures and realigning them, altering the layer properties, and playing around with them until the correct texturing was achieved (Fig03).Â  From this "play", the correct surfaces arose.Â  Please see the Fig03b file for some of the textures used. Â Some elements were hand-painted, such as the tentacles. 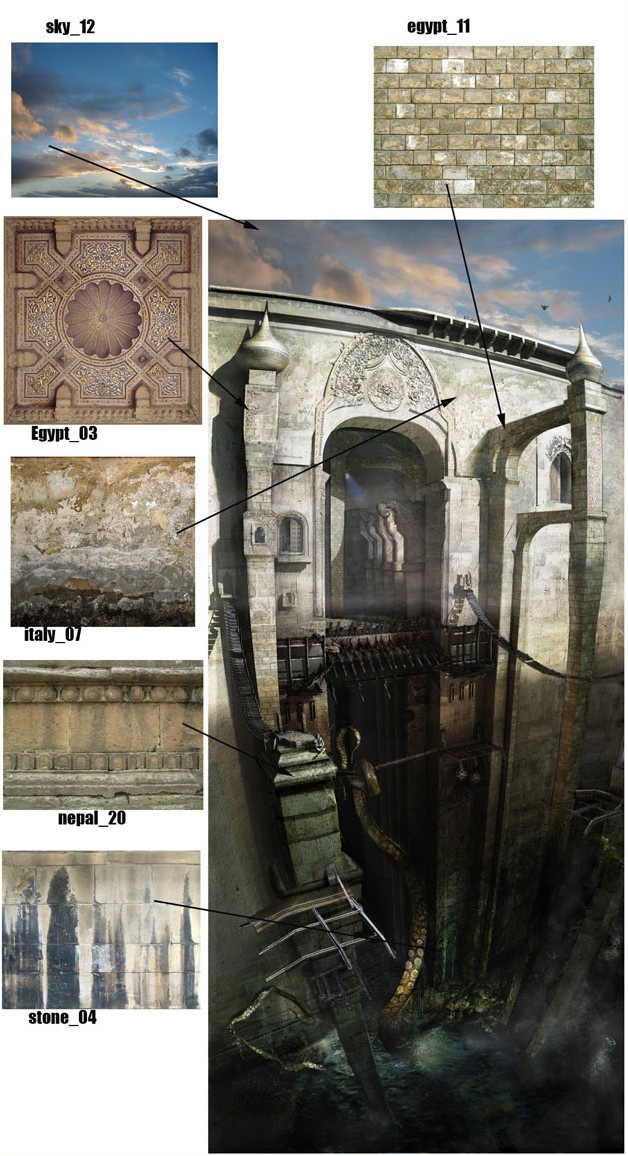 The fog was rendered with Maya software. Â Because the fog didn't reflect in the sphere (that created the fish-eye effect), I had to use the Spherize filter in Photoshop as best I could, and then correct it by hand (Fig05).

I am pleased with the end result because it achieved my aims (Fig06).Â  I needed to show some texturing with clear detailing. A lot the stone structures achieve this. Â I wanted to tell a small story about a city that had built barricades against the creatures in the river below it. Â This city probably relies on the river and has built up around it, but the black river is also causing lots of problems, such as tentacled monsters pulling down their defences! Â

It is also a crude metaphor for our civilisation's reliance on oil. Â In the future, I would like to incorporate more sophisticated storytelling in my images, whilst still creating aesthetically pleasing work.
The most difficult part was creating a realistic image from my slow and imperfect process. Â I am considering using a more pure 3D approach or a more painterly approach, in the future, so that my images will have a stronger overall consistency of style. Â I still think this piece has achieved a good creative middle ground though, and I am pleased with it.