I like to create that which does not exist, but a place that people could believe to be true. Once I have the desire to create a fantastic place that will seem real to you, the scene should hold your interest for as long as you look at it. In the given article, I will tell you about the most important points of creating my recent picture, "Morass".

The scene began with the creation of the water and grass. Then came the texturing of the background and vegetation, and only after did I insert the animals and cocoons into the scene. During the course of creating the work, many objects were completed and altered to suite the environment of the world I wished to visually create.

For the water I used the usual Vray Mtl + falloff for the reflection and refraction and noise in the bump. The grass was created with the help of an ivy generator plugin. Turbosmooth and Vray Displacement modifiers with a raster texture (Fig.01) were used (Projective coordinates - by default). 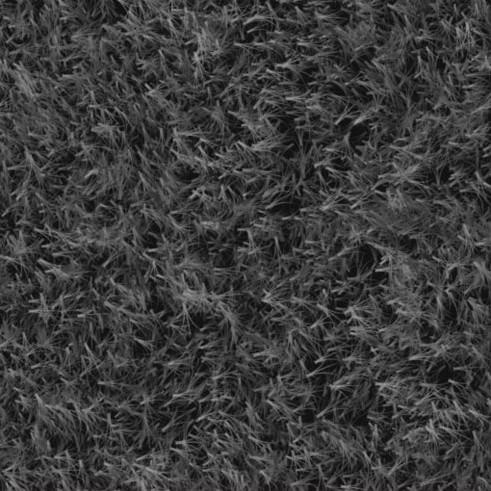 In those places where the grass comes into contact with water, it was necessary to change the colour to a dark green; the mix map on the diffuse channel was used for this purpose. The mix map was used with the Map Channel 1 (the same channel was also chosen in the UVW Mapping modifier) (Fig.02). 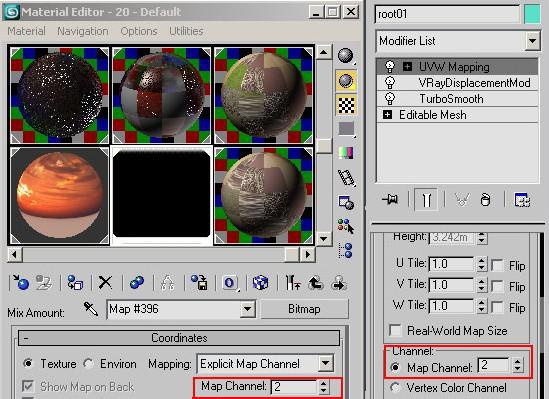 This allowed me to avoid the influence of planar mapping on a displacement texture (see Fig.01) and diffuse texture (Fig.03). 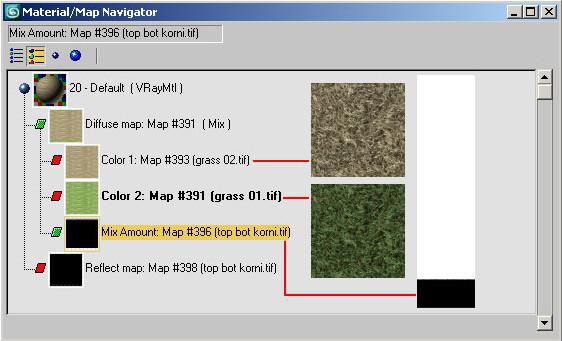 How did I create the leaves on the grass? Well, I copied the basic object, and in the viewport I removed the bottom polygons and changed the texture in the diffuse channel. A displacement modifier also helped to change the texture (Fig.04). Here I used planar mapping (distortions are not appreciable). To economise on resources, I removed not only the bottom but also distant polygons. 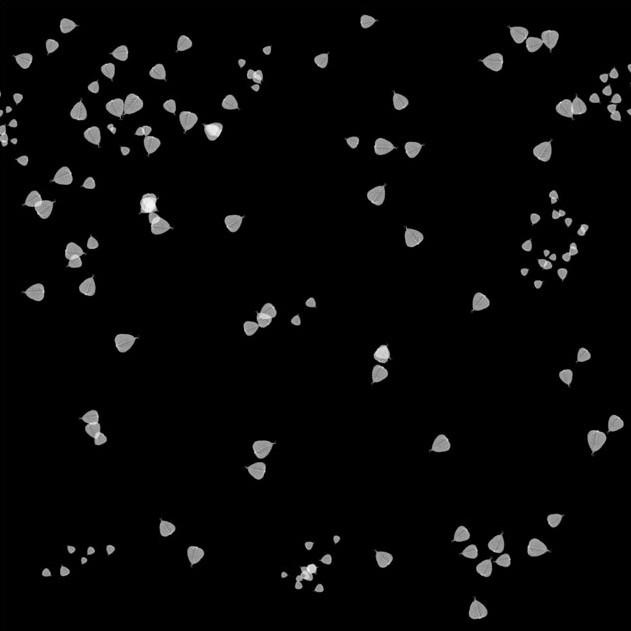 All plants were created in the programme, Onyx Tree and materials for them were made in 3ds Max. I transformed some of the plants in VRayProxy. However, I found the landscape to be somewhat boring and so decided to add some animal life to the scene. The sample I used was a terrestrial being, Phalangium Opilio. From an old artwork I made a simple model of the spider (using the method of polygonal modelling; the feelers were created with the help of the loft tool) which I was able to re-use for this project (Fig.05). 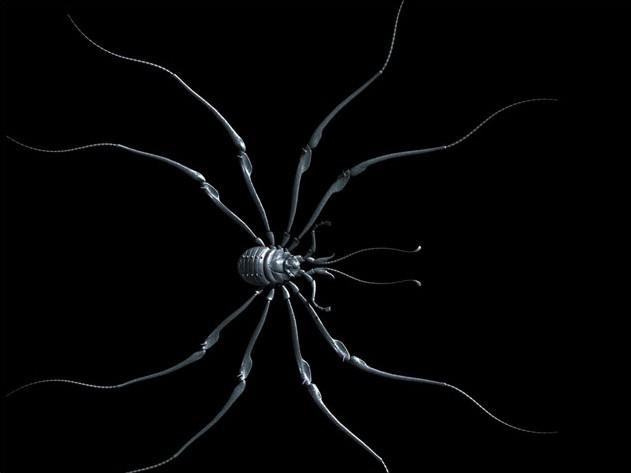 The finished model has added segments, added thorns, and increased hair (by means of the Hair and Fur modifier). Hair was then transformed into a grid. Before giving the creature a desirable pose, I moved the affected pivots to joints and adjusted the links (Fig.06). Here is the result (Fig.07). 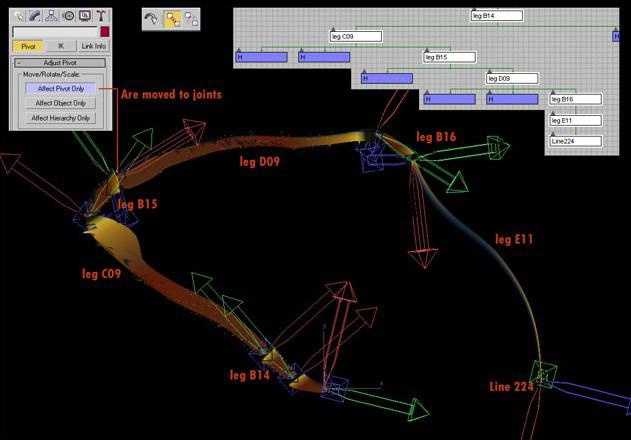 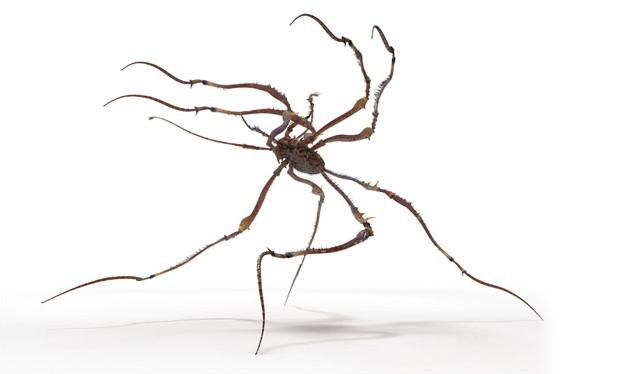 I lowered the horizon line in the basic scene file and inserted the model of the spider monster. I chose a sky light for my basic illumination, and the character was kept dark so that it displayed an accurate contour. The lonely travelling monster is on the boundless bogs of a distant plane but still looked boring. So I decided that I'd need to show something more interesting...

I'd like to state here that in this work the simplest texturing methods were used (no Unwrap UVW, just UVW Mapping). All textures for the main characters were procedural using SSS (Fig.08). 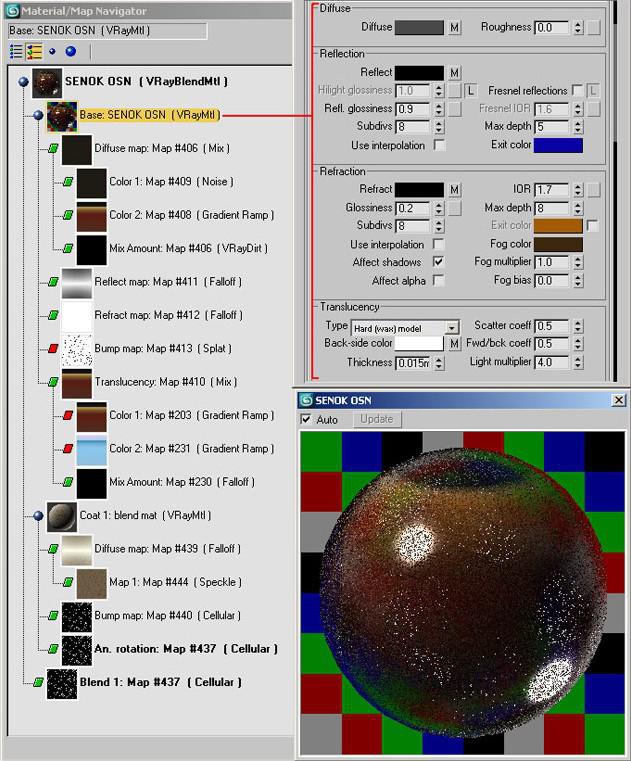 The centipede was created very quickly (using the method of polygonal modelling). I created a spline, repeating its position, and then took advantage of the Path Deform modifier (Fig.09). I usually use this modifier for snakes. The cocoons in the scene were created as shown (Fig.10). For the textures on the egg it was necessary to work in Photoshop (Fig.11). It turned out to be a very difficult material, so I will just say that I used VRayBlendMtl with SSS to keep things simple. 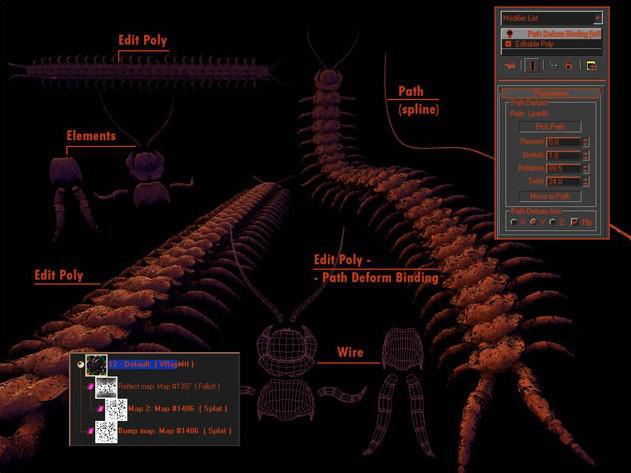 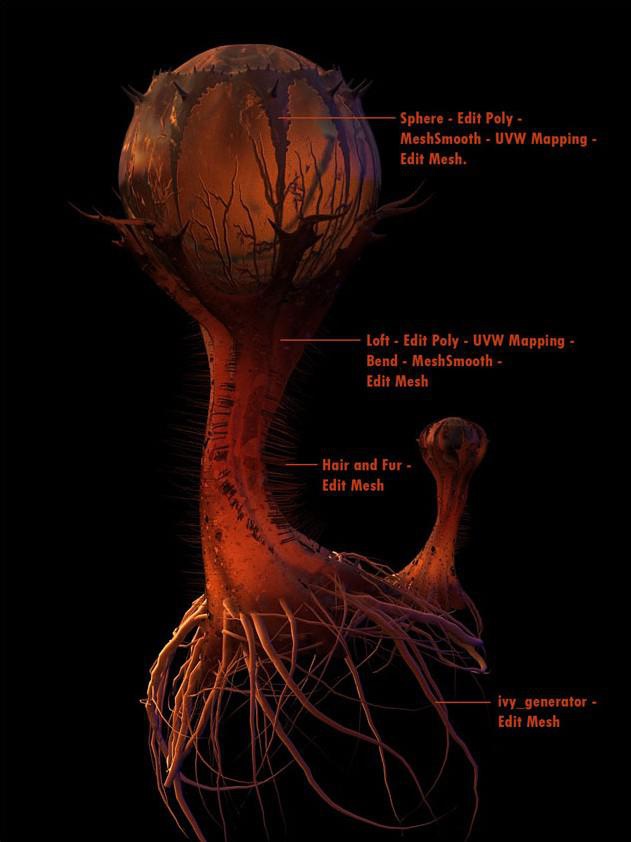 The lighting was very simple: only one texture (Fig.12) on a geosphere ("Sky"). But for the reflections, this texture was not suitable so I I used the sky material, VRayOverrideMtl (Fig.13). It allowed me to use two different materials for the reflection and illumination on one object ("Sky"). 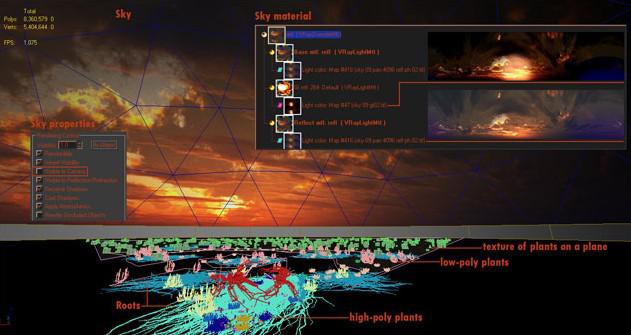 The textures for the reflection and illumination were created in Vue, with the minimum quality. The final texture for the background was created with the maximum quality. I then finished the textures in Photoshop (for example, some dark blue stains on a texture (see Fig.12) were necessary for the creation of dark blue reflections from the spectator). This texture was used for the background (Fig.14).

I switched off Visible to Camera in the properties of the geosphere ("Sky"), so that the background was visible through it. I then developed materials for the scene objects in a separate file with the same lighting as in the main file. In this additional file there were only objects necessary for lighting and those developed with a material in mind to speed up test renders.

I added contrast to one of the cocoons in the foreground, and dipped the bright lights in the distance (in Photoshop). Experiments with Max's fog failed right from the very beginning of the work, and so I decided to render VRay Zdepth as a render element. To make sure I didn't lose the sky in this fog, I also created a Vray Alpha. The fog image layers were then processed in Photoshop (Fig.15) and then combined back in Max (Fig.15). 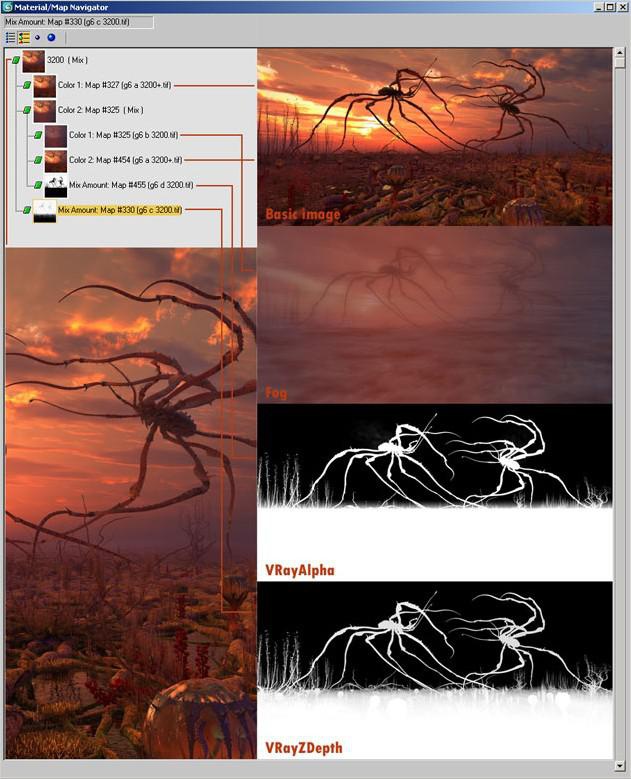 I have tried to cover the most important aspects in the creation of my artwork in this article - I apologise if some think that I have not explained things enough. Have a look at the final image again and you'll see that there is nothing too difficult going on here - just time, and a love for art. I wish you all the very best success. Thanks for reading.