The "Modified Megane" project started as a personal challenge to improve my skills in modeling. The car modeling was one of my greatest handicaps ever, so I thought it was the right moment to prove my skills. I choose the Renault Megane as it's one of my favorite cars, in fact I have one and could get as many reference pictures as I needed. For the development of this project I used 3dsMax 9 and Vray. The next step was to find some blueprints with were good enough quality and more information about spoilers, rims,... In the beginning, my idea was to perform only the modeling of the car, but when I finished, I decided to make a single render with a extremely simple environment that did'nt subtracted importance to the car itself. Let us see how I created the "Modified Megane."

As I said, the first thing was to find some blueprints with good quality and once found, I created four planes mapping them with the blueprints so I could use them as guides for the basic modeling, showing the diffrent views that I needed (Side, Front, Back and Top). 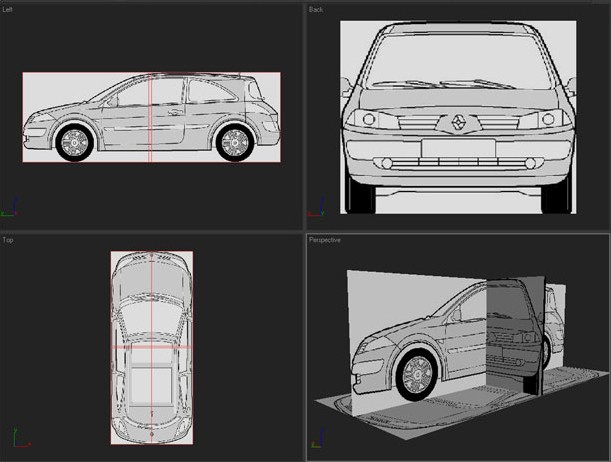 Each and every one of the pieces of the car were modeled using the same technique: Polygonal Modeling. I started with the body of the car, in its basic model without spoilers and such, just as leaves the factory, giving all details at the end.

I started with a plane of a single face that became a Polygonal Editable Mesh. The plane is placed just above the wheel on the side view and selecting the lateral edge, I began to extrude towards the rear wheel and the rear a rea of the enrollment, with the other side edge toward the area of the front enrollment, on the basis of the blueprint of the Top View and the edge higher, up to the bonnet, based on the blueprint front, side and above. In this way I was forming the basic form of the Megane, extruding only edges (Shift+Move) based on the blueprints reference. 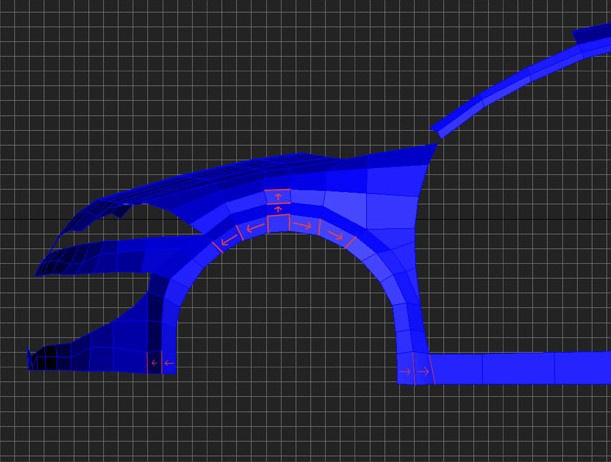 Thus, the main form of Renault Megane (basic, non tunned) was near to be finished . The mesh obteined needed a more smother aspect so i aplied a TurboSmooth modifier with two iterations in the Viewport and four in the rendering, in this way, I could work properly without losing much performance of my PC. Once the car body was finished, I spent a lot of time to refine the mesh, "passing the polishing" aligning all vertices one by one, because one misplaced, gave the sensation that the car was a great blow. To add hard areas to car, such as the line that runs throughout the side, with a line of edges selected and placed in the right position, I applied a Chamfer with a value of nearly 0, and for the corners, as in lighthouses, a Chamfer almost zero but this time at the vertices of the area. Once finished this task, I began the process of adding details and secondary objects to basic model: spoilers, wheels, mirrors, glasses....

For all accessories as spoilers therefore exactly the same method, a map of one side placed in the area where will be located, and once converted to Editable Poly, extruding edges and forming the basic shape of the objects and then refining and adding detail. 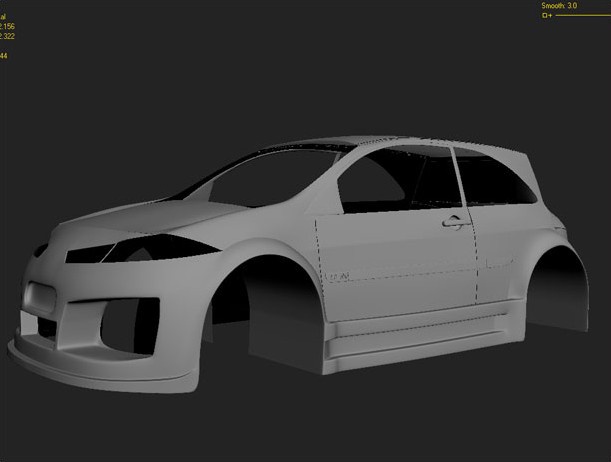 For the wheels I did not used a plane, instead i used several objects, but it is exactly the same technique, we'll take a look at the construction of the wheels.

I started with two tubes with equal number of segments, choosing one face and one not on the external side of one and the same faces of the internal side of the other, all selected faces were removed and then attached, then extruding the holes resulting in the direction of the opposite workpiece I closed the basic shape of the rim, from here, as well as the body of the car, chamfer in the edges that needed toughness with a value of zero or close to zero, to make the holes for the screws, placed vertexs in the standings with chamfer high, and erased the new polygon and extruded inwards several times and chamfered the edge to give hardness .... Always, and throughout the process of creating the modeling, the same technique, extrusions and chamfers, and a bit of work softening pieces. 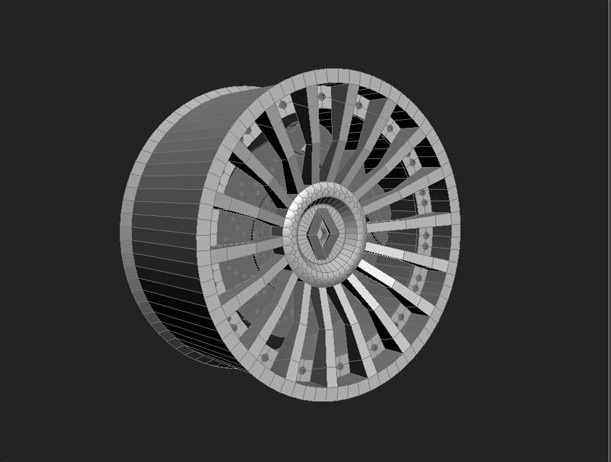 For tires, I used a tutorial I founded on the web. Describes very good the creation procces of the tire:
http://www.max-realms.com/modules/tutorials/tire_tut2
When I finished the tire, It, was ready to added the rims and tires to the main shape of car. 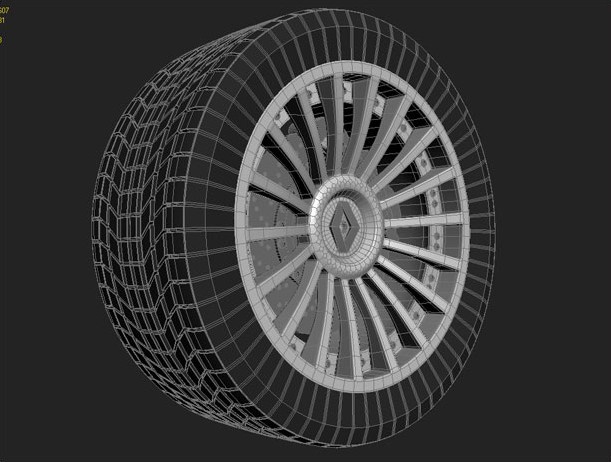 The environment modeling is the simplest of all, as I wanted to keep it absolutely simple. I choose to do a kind of model city created with a plane with many faces, extruding the faces that I was interested in very high values, and removing polygons that did not need to create a sense of city. The camera viewpoint was set up almost since the body car mesh was modeled, and didn't changed until the end except very very minimal variations. 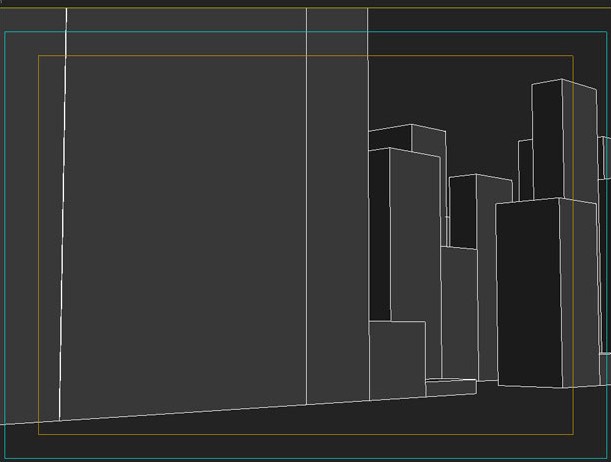 Once finished the entire process of modeling and seeing that I had achieved my main goal, which was modeling a car, I decided to go ahead to make the render. Since the scene hasn't a lot of materials, all the contrary, we'll take a look at the materials from the body and glasses. Almost all materials from the scene of the Megane Modified are Vray Materials, VrayMtl.

For the body I had many doubts, at first it was "tattooed" on the sides and at the front with tribal paintings, an idea I dismissed because being too "tunning" for my taste. The car went through many colors to give the final red: orange, black, gray, blue ... After testing and testing, I found what I was looking for, that red in the final image. 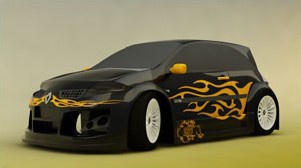 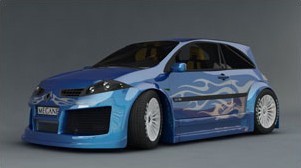 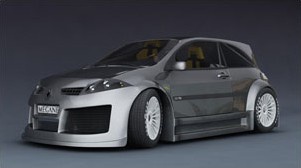 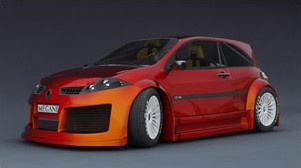 It was very important that the car did not look plane all along its surface, so that, after I saw the evidence that a diffuse color was not what I needed, I introduced a gradient ramp in the diffuse channel, a ramp that in the beginning was almost black throughout central cross, and the final one orange red. Thus, depending on the viewing angle of the car, the color varied somewhat, especially in the left corner just in front of the camera, because the angle and reflections, it is tinted orange, which gave it a good color variation , just like I wanted.

From there, I activated the Fresnel reflection type (basic for my taste), I used a value of 20 subdivisions for reflection, I introduced a VrayHDRI on channel environment of VrayMaterial and gave some adjustments at the same hdri, basically Multiplier and Gamma. Also, in Reflect Interpolation I used values of -3, 0, instead of -1, which is default. 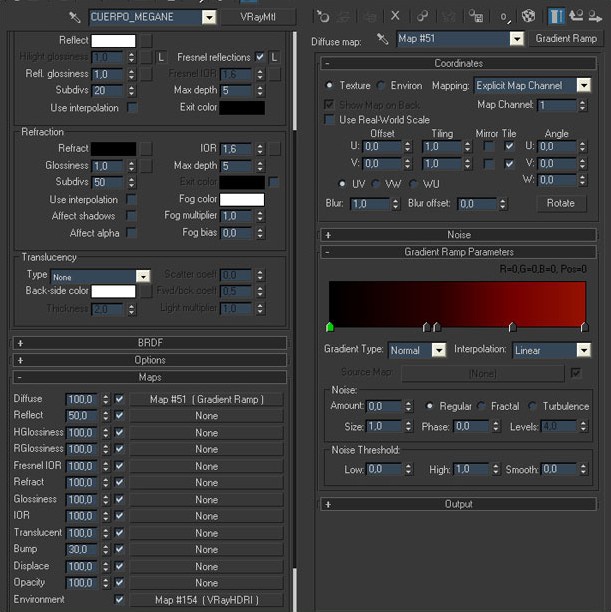 The other interesting material from the scene may be the glass of windows and windshields. This, as the car paint material, is another Vray material. In Diffuse slot a Fallof type Perpendicular / Parallel, from white to gray (94). The channel reflection, has another fallof also Perpendicular / Parallel type, but this one from black to dark gray (60). Finally, the refractive channel has another Fallof also Perpendicular / Parallel, from a very clear gray (218) to white. The Reflect Interpolation, as in the body, is amended to -3, 0. The subdivs both reflection and refraction are uploaded to 50. Lastly, to ensure that the glass is as I had in mind, I had to decrease the default value of the IOR as i wanted a glass with very little refraction so i used value of 1.05.

The remaining materials are already more simple being a diffuse color with some Bumps, material mixed with a variety of masks made in Photoshop, blended colors in the diffuse cannel using noise ...

The lighting was the part of the whole process that gave me more headaches. From the moment I decided to do not only the modeling, but bringing forward a full rendering of the scene, I had an idea of what I wanted to do, so trying to bring up the scene ilumination cost lot of time testing.

The main stumbling block was that I did not want to have a key light as a sun or main light source, wanted a homogeneous light distribution throughout the scene, without causing harsh shadows or anything like that. Given this, I had to go dismissing all the test trying a studio light simulation, with a key light and some other lights as filler. Finally I decided to make it in a easier way , so I created a large box quite high with respect to the car and rotated about 45 degrees so that would not be completely parallel to the car and I applied a self ilumination material with very little value. Between the body and the box, I created a plane vraylight aimed directly at the box, instead of the car, with a multiplier of 15, invisible and affecting the diffuse and specular. That finally got the effect I was looking for, the whole scene was illuminated uniformly without creating harsh shadows or contrast and dark areas. 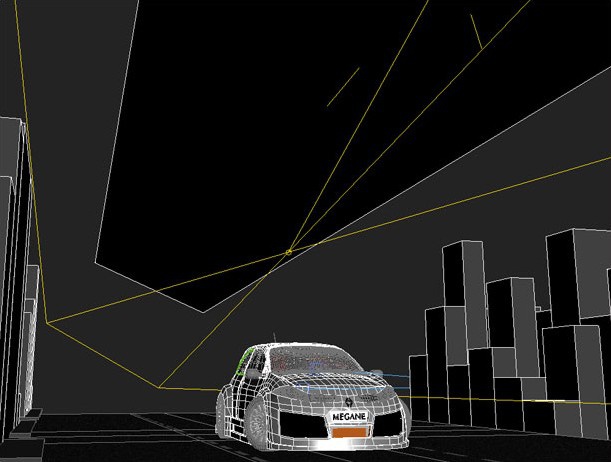 Let us move on to the final part of the process of creating the whole scene: the rendering. As I said earlier, for the process of rendering I chose Vray engine as I already have a good knowledge of it, it is an very fast engine and achieved excellent results. For GI, I selected the combination of Irradiance Map to the Primary Bounces and Light Cache for Secondary Bounces, the combination more used to obtain accurate results with Global Illumination. To view the render configuration it is better to show some catches with the Vray modified data. With this configuration, the rendering took 3 hours and 40 minutes to complete a size of 3000 pixels. 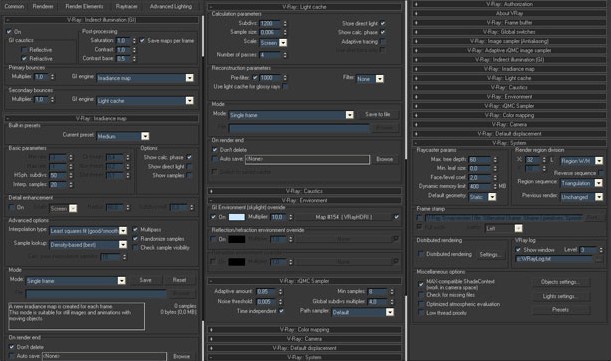 The postproduction for the final rendering was done entirely in Photoshop, basically consisted of a small color correction, a little Glow, and add the DOF with the map I had drawn from the Scanline render of max. In the next picture, you can see the difference between 3dsMax image and and Photoshop image. 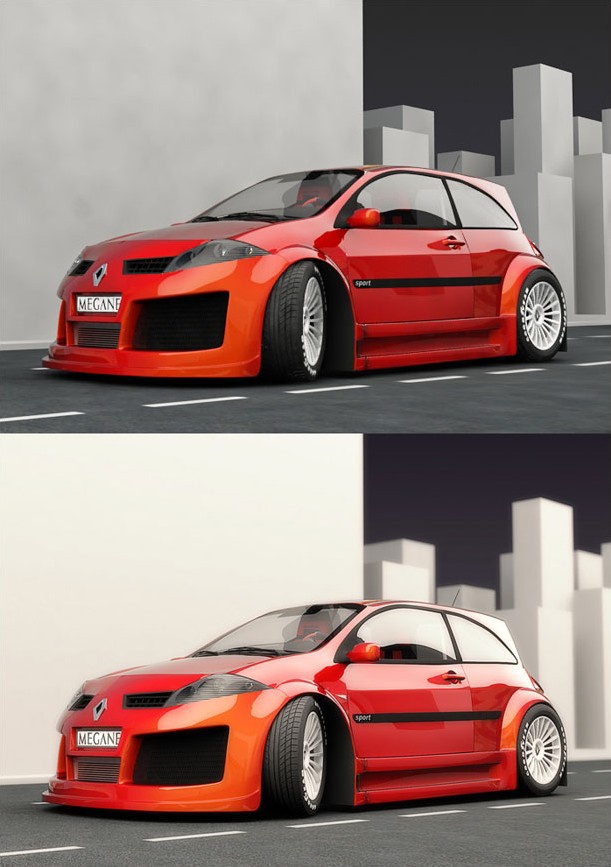 Well, so here comes this tutorial in which I have tried to show the most important aspects to be taken into account in the creation of the "Modified Megane" scene from start to finish. As we have seen, the work, rather than technical and software knowledge, requires more patience and know what we want to achieve and move step to step reaching the goal. As I said at the beginning, all born as a challenge to overcome the handicap in modeling cars, and at the end, I was happy with the modeling and the resulting scene, therefore, the effort was worth, what is really important.