Making Of 'Mary Jane and Spiderman'

Before I begin the steps, let me explain what tools I mostly use when I create my illustrations. I'm not going to show how to use all the tools, it is your job to read the manual that came with the software and practice using them. Lastly, whatever I draw in Illustrtor, I like to think of them as "objects". If I were draw a simple line, that would be an object. Then if I were to draw a circle next to it, that would be another object. 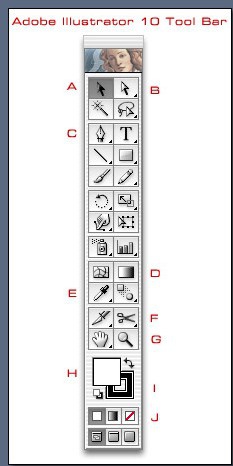 A. Selection Tool (V). Simple tool to move an object around.
B. Direct Selection Tool (A). A tool that allows you to move indivdual points
C. Pen Tool (P). Imporant tool, allows you to create curves.
D. Gradient Tool (G). I don't use this tool that often but it comes in handy. This tool basically creates a gradient.
E. Eyedropper Tool (I). A simple tool that picks up color.
F. Scissors Tool (C). This tool allows you to cut vector lines.
G. Zoom Tool (Z). Allows you to zoom into the document.
H. Fill (X). Fills the object with any color you select. Select a color by double clicking on the box.
I. Stroke (X). Allows you to change the object's stroke color.
J. None (\). If you want no fill but a stroke, click on the fill box and then this button. The same goes if you want a fill but no stroke. 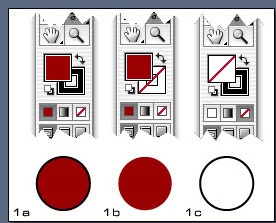 The three objects above were created by using the circle tool. All three are the same but 1a has a fill and a stroke, 1b has a fill but no stroke, and 1c just has a stroke.

You can also create your own shapes by using the pen tool, make sure you connect the end point to the beginning point to create the shape. 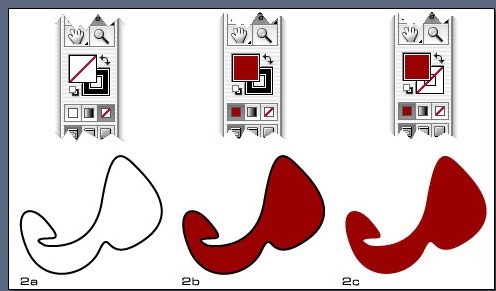 In 2a, 2b, and 2c, you connected both end and beginning points to create the shape. If you don't connect the point and just have a stroke (no fill), you basically created your own line (using the Pen Tool of course).

Using the idea from 2c and 3a, you can create a line that changes in thickness.

Step 1: The Secret Behind Hawk's Illustration

Let me tell you the secret behind all my illustrations. Before I even start up Adobe Illustrator, I sketch out what my illustration will look like. Most of the time I sketch the idea carefully on a regular computer paper with a pencil or blue drafting pencil. The purpose of the sketch is so you will have a guide when you work in Illustrator. 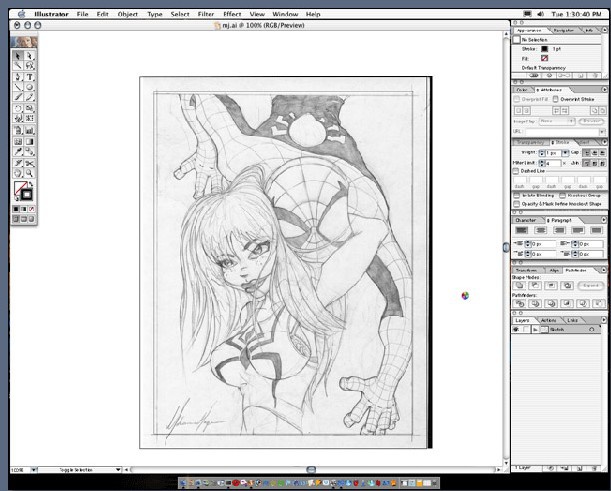 1. Using my Spider-Man / Mary Jane sketch as an example, I did the sketch on a regular piece of paper and scanned it at 300 dpi. (Yes I over did it with Mary Jane.)
2. After
I scanned the sketch in, I took it into Photoshop and made it lighter. I want
it light enough so I can see everything and tell the difference when I start tracing it.
3. I saved any changes I did to the sketch and brought the image into Adobe Illustrator. You can bring the sketch into Illustrator couple of ways; you can copy and paste it or go to File->Place and select the sketch file. 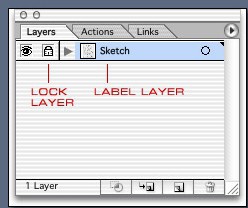 When you bring the sketch in, Illustrator loads the image into the first layer. I always call that layer sketch and lock it. Make sure you lock the layer that contains the sketch; you don't want it moving around on the window.

Step 2: Nothing Wrong With Tracing

After the sketch is scanned, placed into illustrator, and locked into place. It is time to start tracing the sketch by using the pen tool and creating vector lines and shapes. This is where my little introduction comes in. If you have not read the introduction by now, please do so. 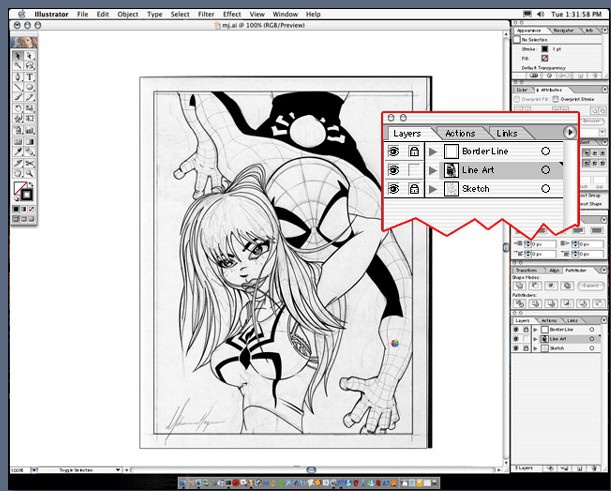 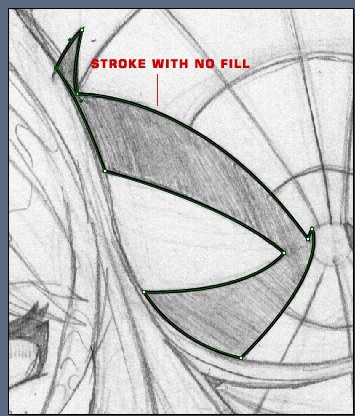 2. I'm on the Line Art layer now... I make sure I zoom in very close to the sketch before I start tracing. When I start tracing the sketch lines, I start with the black areas. What I mean by that is, anything that will be a soild black color, I will do first. For example, I start tracing Spider-man's eyes with just a stroke. 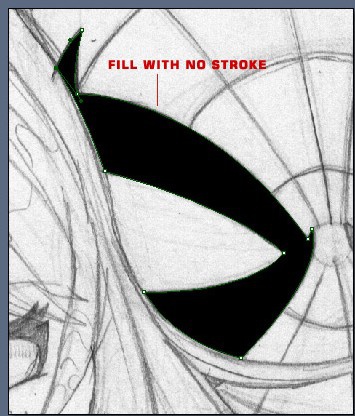 After I trace around the whole eye, I switch the stroke line to fill with no stroke. Now If you find your shape looking a bit off or weird, you can you the Direct Selection Tool (A) and move the indivdual points until it looks right. After I go around and fill in all the solid black shapes, I start tracing the rest of the sketch with strokes. Remeber you can create strokes that changes in thickness by creating thin fills. Look back in the introduction if you don't know what I mean. 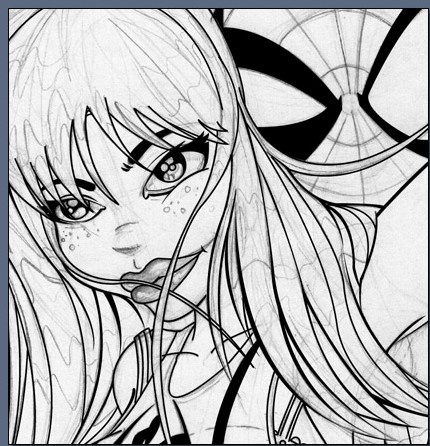 3. Yes I left out Spider-Man's costume webdesign on purpose. I'm planning to use a dark red instead of black for those lines.

Now that I have a clean line art of my sketch, it is time for some coloring. I could take the line art into Photoshop and color it, but then it would be more of a painting than an illustration. 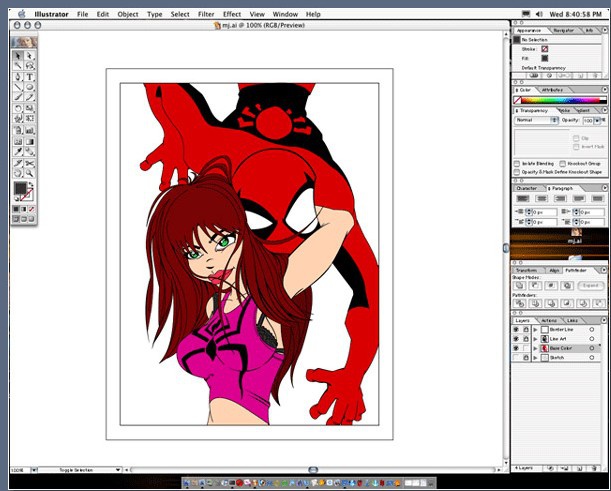 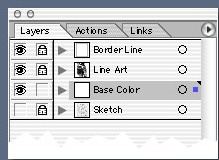 1. Everytime I add something completely new to any artwork, either in Photoshop or in Illustrator, I create a new layer. Layers are what makes any artwork look good.

Now I have a line art on one layer, I create a layer under the line art and call it Base Color.

IMPORTANT: I make sure I lock my other layers so they don't get distrubed. 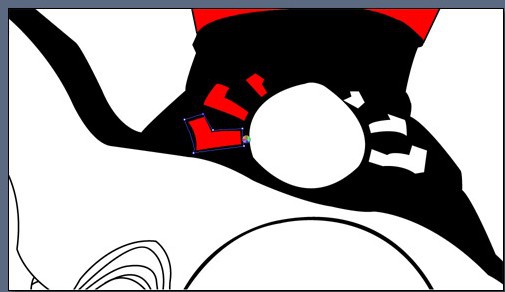 2. Now I have a layer to hold my base colors, I decide where to start and what color to use. The way I drew Spider-Man was pretty simple so I decided to start with him. Since Spider-Man is mostly red, I started to color all the red ares on his costume.

How do I color in Illustrator?

Simple, I take the pen tool and start creating vector shapes with no stroke but with a red fill. 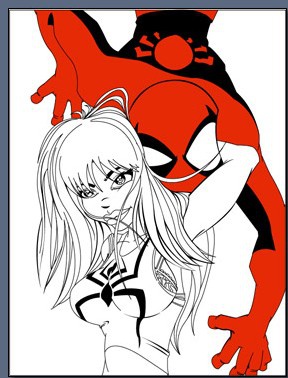 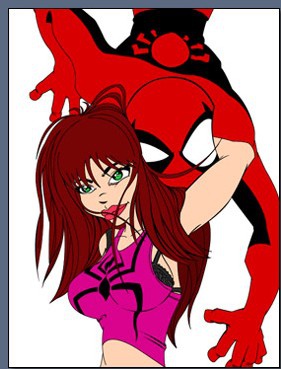 The base color is all set, but there is a problem. The illustration looks completely flat. I need to make it look more of a 3d illustration. One way to do that is by adding shadows to the characters. If you ever went to your art class, you learned how light and shadow works on an object. The way I work with shadows/shades, I pick a light source. The light source for this artwork would be at the upper-right hand corner. Picture a flashlight at that corner aiming right at Spider-Man and Mary Jane. 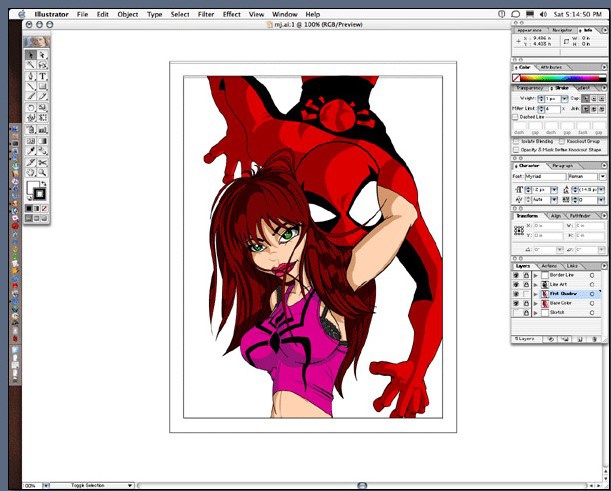 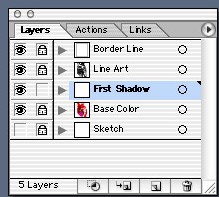 1. Since the shadow is new to the artwork, I create a new layer above the base color, but under the line art. I always like to work with couple of shadows, so I call this layer First Shadow. 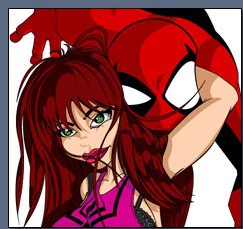 2. Creating shadows is simple. It is just the same way when creating the base color. I pick a color and start creating vector shapes with no stroke but with a fill. For example, when I create the shadow on Spider-Man's costume, I pick his base color and then change that red into a darker red. The same goes for Mary Jane's pink-purple shirt. I pick the base color and make it a little darker.
Â