Making Of 'Made Of Junk' 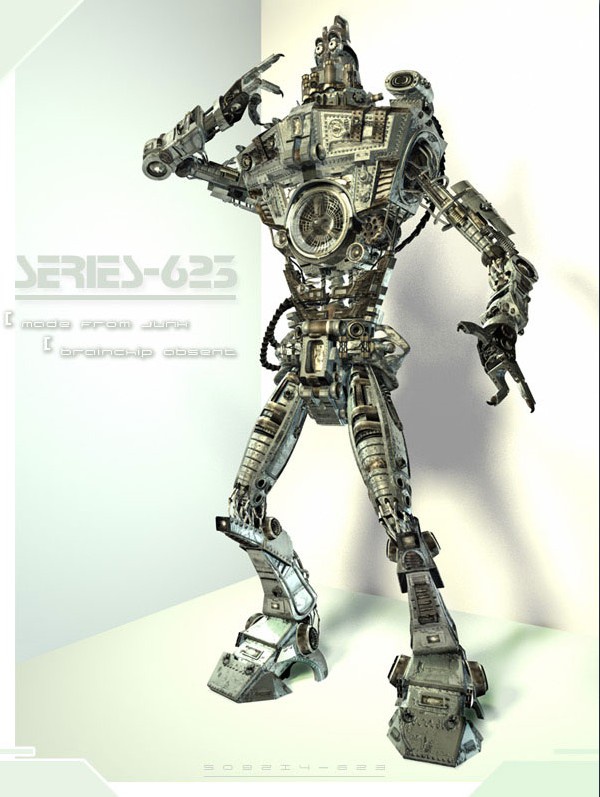 Greetings to all - This tutorial concerning "made from junk" begins with a slightly apologetic disclaimer... in that I created this character with absolutely no concern for poly count, nor texture space. Also there was no character rigging involved,
or constrants set up so if you try to animate him - well, to animate him, you'd better have a honking system anyway because this sucker is over half a million polys. That having been said, the most important aspects of creating this character were in the modeling and texturing. 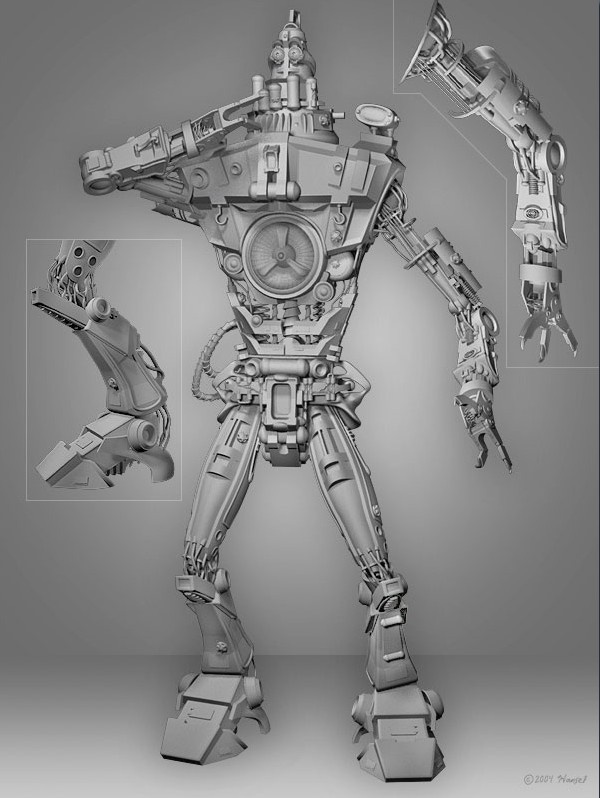 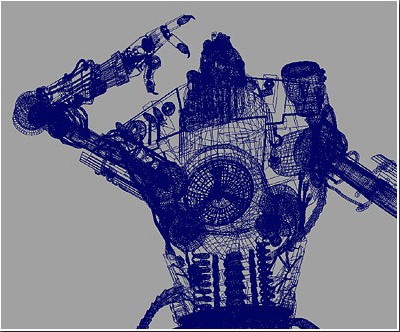 The wireframe view shows how I spared no expense for polycount . I actually started with a human figure model, and created a pose that I wanted, using a lattice to deform the upper body more to the exaggerated size of the character. (From time to time, I would hide and unhide this reference to make sure I was building him in the right direction.)

Most of his components come from primitives, with extensive use of the following tools: (Under modeling:) extrude edge/face, split polygon tool, and the append to polygon tool.

Extruding faces is invaluable for this, because so often a primitive that you're working with can be easily added to or reshaped with this tool. Split polygon helps divide those surfaces the way that you want them, and "append to polygon" helps you make connections between different primitives that you combine. 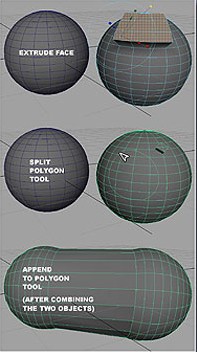 It will help your character creation considerably (in Maya) to realize that the modeling tools aren't only under the modeling menu. Many of the tools that you use to animate, can also assist you greatly in modeling. (Under Animation:) Tools like Deform/ Lattice - which helps you shape things a lot easier. Blend Shape, and the non-linear bends, flares, twists, and waves are excellent tools for building your model as well. Just don't forget to delete the history once you've found a shape you like, or you could end up with some serious lag time in moving around your views. 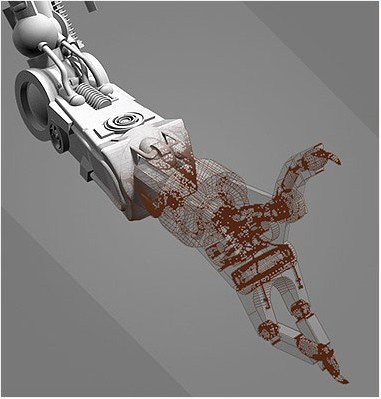 The whole reason I created this, was to try out some new textures that were taken with digital cameras by myself and a friend at the Las Vegas Air Show last year. We were in and out of planes - practically climbing all over them, and were frequently asked by paranoid military types if we were planning on building our own planes with as many photos as we were taking. 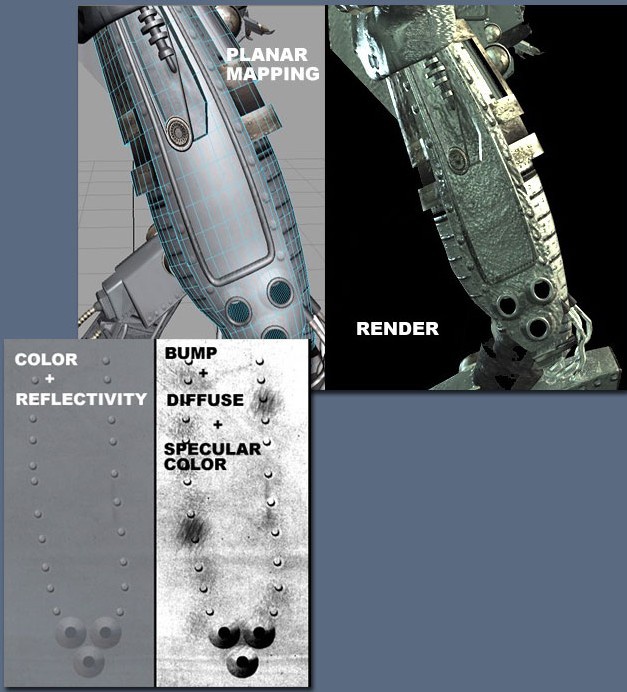 I pretty much used the standard ways of mapping for this, mostly planar or cylindrical mapping, with an occasional spherical, or "create UVs based on camera" thrown in here and there. (The metallic textures were mostly blinn shaders.) What I experimented with quite a bit was how the maps that I had created could be applied to different aspects of the shader in the attribute editor. I ended up with many different combos for each shader, but found one formula imparticular to work really well for the metal in this model. My texture map was applied to both color, and reflectivity, while my bump map was applied to - bump, diffuse, and specular color. This really helped the metal to shine where it was needed, and kept the reflectivity under control considering the dense mass of objects involved. 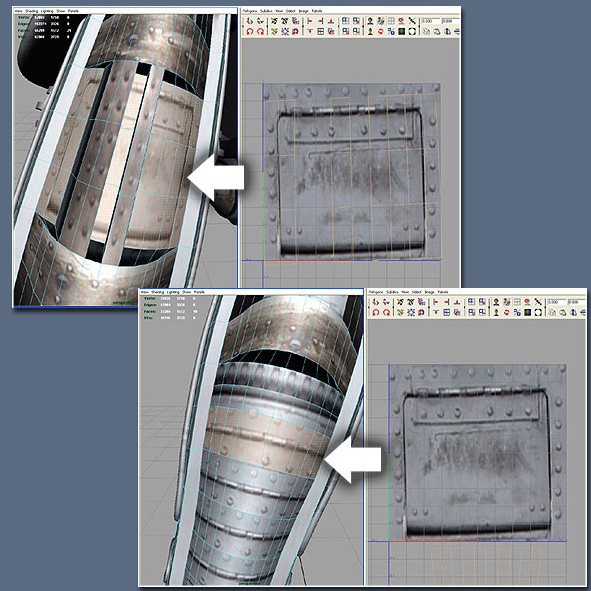 While any one object I created could have anywhere up to 13 shaders applied to it, it's not quite as bad as it seems. You can get away with it and keep your render time down if you reuse textures a lot. Thirteen doesn't seem like too many, when you consider that the entire robot uses 70 textures total. 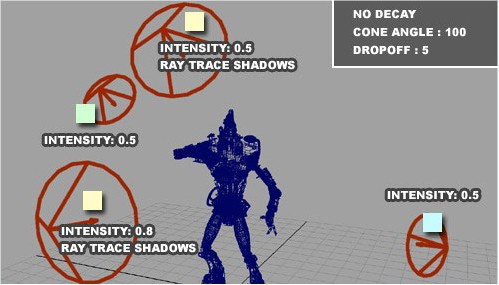 To light the scene, I planned on only using 3 spotlights, but went with 4 in the end, as I was having difficulty getting the top part of him to show up enough with only one front light. Two warm lights were up front, (colors shown in reference) and two cooler lights, 1 greenish tint and one bluish tint from each side and behind the model. (I was using Maya Software instead of Mental Ray because I'm a glutton for punishment!) in front - the two lights are casting Ray Trace shadows. The background is made up of 3 flat polys forming the shape of the corner of a cube. (I shaded them with a lambert off-white shader.) The combination of the colored lights at different intensity settings made for the nice minimal background look I wanted, and keeping the "shadows on" with the front two lights only gave me the shadow shapes I wanted on the walls and the floor.
Â

Really not a whole lot to add here, except when using Maya Software to render, make sure that you pay attention to the shadow settings under the Ray Tracing Quality when rendering objects with many highly reflective materials applied. The defaults are set strangely as is the case with a lot of the presets of Maya, but even for something as detailed as this I got away with a setting of 1 for reflections and refractions, and 2 for shadows (since the minimal background would primarily accentuate the shaded areas). The rest of the image, added text and design work, was created in post work using Photoshop. In the end, there were no "cleanups" of the character itself in post, because I strived to make it work fully in the render so that I could render him as large as I wanted. Post work is great, just be careful not to depend on it or you may be creating a lot of busy work for yourself later.

Well - that's about it - and thanks for taking the time to read this article!