Hi all, my name is Eve Berthelette. I started ''Le Bain'' in 2007; the idea was to do something architectural and oriental. After some sketches, it became a bathhouse - I thought having a water surface would create a nice reflection effect. Unfortunately, I had to put this project aside due to lack of time, which resulted in a lack of motivation as well... But recently (this last January 2010) I happened to have lots of free time... and still had this unachieved project, so I gave it a new try - it took literally a month of work, and here it is at last!

I unfortunately have not kept my early paper drawings; Fig.01 is the oldest draft I have left - a modeling and rendering test from 2007. But the final image evolved a lot from this early work - I don't have the 3D scene anymore, only this image remains. So this time I started from scratch again. It was the same idea but I think it could have ended up quite different if I had kept going with the old modeling.

For both though, there is one thing I did exactly the same (and maybe this was not the best idea): I did sketches and started modeling without any references, just to see what could come out of my head and how far I could push it. 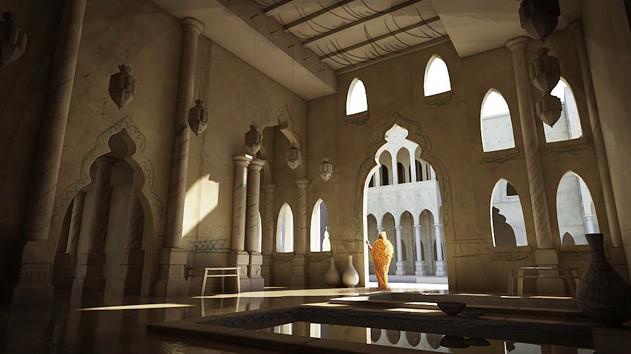 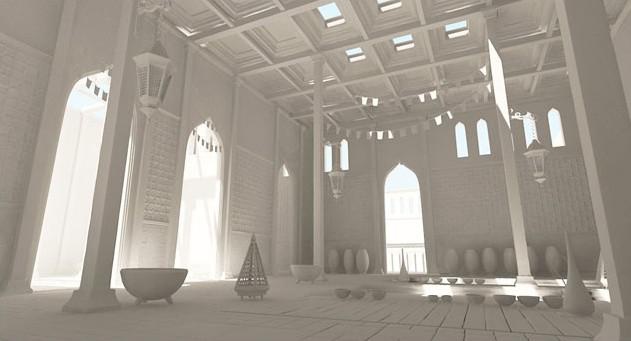 So I changed strategy, and looked for inspiration. I also started showing Fig.02 to my co-workers. I'll point out that unlike the 2007 render, this time the room is much bigger and light comes from back left. I wanted the sun to hit the exterior wall - the one you see across the room, through the door on the furthest wall. I was happily surprised by the very positive reaction people had to it. Most were very curious to see where this would lead me, and many provided me with inspiration images, travel pictures, ideas etc.

I therefore referred to the work of a couple of Orientalist painters and some Iranian travel pictures. One website I really liked was: www.arabiaexotica.com 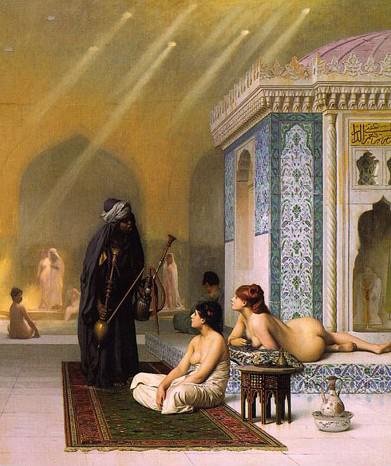 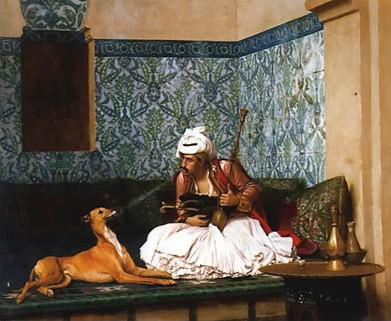 Fig: 03b - Une Plaisanterie (An Arnaut Guard Blowing Smoke at his Dog) by Jean Léone Gérôme

From there my work progressed much faster. I also decided what look the final image would have. I liked the painting style of the Orientalist painters, and wanted to create an illustrative work more than a 3D-looking image. It would be realistic, but not photoreal. Each week I was showing something new to my coworkers, and gathering new comments and suggestions.

Fig.04 shows the modeling work in progress. Point of view is refined and I started adding accessories to fill the room.

Fig.05a shows the first diffuse maps applied on objects. Starting the texturing early helped me to figure out how to set the final mood. From there on, I alternated between modeling and texturing.

I then kept working on the modeling and texturing, while also starting work on the shaders (Fig.05b - 05c).

I did most of the modeling work with Maya. This is the software I know the best and am most comfortable with. But I wanted to use V-Ray as the renderer. So in the end I took everything into Max. I also used XSI; the characters are originally XSI's rigged man model - I'll get back to that matter later. I guess my workarounds are not a classical workflow, but that was probably the most efficient for me.

I ran into a couple of challenges along the way. The first one was the composition. I originally wanted only one character in the image. I thought of a girl sitting in one of the baths. To make sure she would stand out, I practiced some openings in the roof to let the sun in and illuminate some specific spots on the floor - where she was sitting (I thought it was brilliant!). But when I showed it to people, they would just not notice the character. The whole image didn't have any focus point to it, which was a problem. Interesting images have interesting focus points. I thought then of having the girl wearing bright colors to stand out. But I wasn't sure about this avenue. I tried yellow tones for the girl clothing, I wanted to create contrast with the greenish coloring of wall and floor tiling (Fig.07a).

Then, after a talk with one of my coworkers, we ended up developing the idea of having a second character somewhere in the foreground that would be observing the girl and would hopefully direct the viewer's eyes to the middle of the image, where she was sitting. Then, maybe they could follow her gaze to travel further in the image. And then they would see... not much, actually. The girl was staring at one big door, and there was not going to be anything exciting outside. And again, people were seeing the second character, but that was it. The girl character was not standing out enough to attract the eye - Fig.07b illustrates this idea. 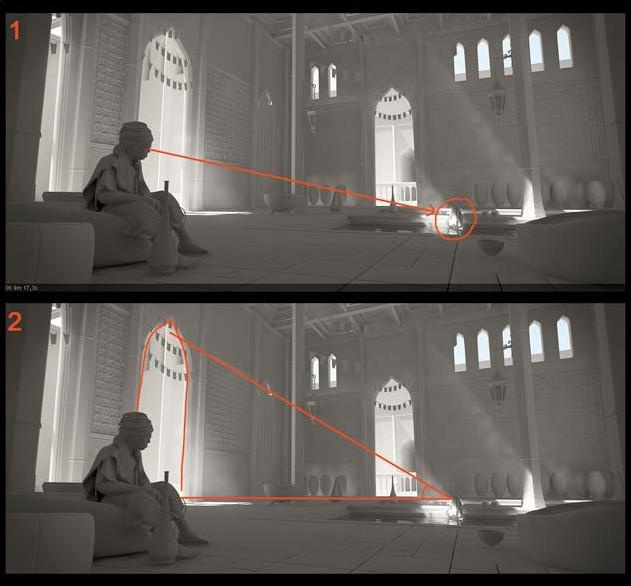 So, I added a second female character. A total of three characters seemed to work. Also, the two women chatting together would attract more attention. I was now satisfied with my composition. The scene could be read as taking place in the pool of a harem, where two girls are bathing under the watchful eye of a guardian Eunuch. I do not claim costumes or patterns would be historically correct, it is only my personal interpretation.

The second great challenge I had was the characters. I am no character modeler. And since in the end I wanted an illustration more than a modeling masterpiece, I planned to draw them mostly. But yet to get the positioning right, along with proportion, I needed a model to rely on. I decided to use XSI's rigged man model. There are some basic options you can use to customize it such as thinner, larger, with or without muscles and that was perfect. So actually, even the two women were made out of this ''guy'' model. Positioning was not perfect, but good enough that I could use that as first layer.

For the foreground character, I kept the pouf and floor to help the positioning. For the two girls, I used a simplify model of the pool (Fig.08).

The clothing draft modeling was made with Maya's cloth simulation. I simply threw rectangle cloth objects on the character that was acting as the passive object, until I could get interesting shapes.

Texturing went well - this is my field of expertise. I created most of the patterns using green and beige tones I borrowed from the Oriental paintings. (Have a look back at the tiling and plaster in Fig.03a - 03b). I used Photoshop for all textures and Unfold 3D for unwrapping the most complicated objects. Every object has its own textures, including a Diffuse map, Reflection map and Normal map at the very least. As example, Fig.09 shows all the textures used for the Moroccan leather pouf.

The last challenge I had was not as arduous as I thought it would be: vegetation. I had an idea about what I wanted to create, but could not picture myself modeling trees and plants and flowers for hours. So I used Maya's Painteffect program. It turned out to be easy and it worked just fine for my needs. Again, this became the basis for my further painting (Fig.10).

The last step was painting. The most painted areas are, of course, the characters. But then the rest had to match in style, so I retouched areas I already thought were done, just to have an overall sense of unity.

Fig.11a shows the straight render, before any painting or color correction.

Here, painting was done and the sky was added. This one was from a photograph (Fig.11b).

Then, I added some curves and a vignette to brighten some areas and darken others. I used RGB matte passes to have accurate selections (Fig.11c).

Next I did some color corrections, using color balance and a curve again. I wanted to match the mood in ''The Opium Smoker" image. I felt that this orange-reddish tint would give the feeling of heat and sand I was looking for. I wanted the scene to convey very hot and dry weather outside, and the bathhouse as a shelter, providing fresh water and shade (Fig.11d).

Fig.11e shows the final touches; the light beams were painted in screen mode.

Finally, I was very happy with the result. During the whole creation process of this work, I often doubted I would see the end of it, and was never certain it would be a happy ending. I'm glad I persevered. Thank you very much and I hope you enjoyed my work.

I must also thank everybody that encouraged me, especially the ones who participated; Samuel Jacques for the little Moroccan table model and his abundant travel pictures from Iran. Dominique Grandmont for the Shisha model, the Morsy brothers for their contagious enthusiasm and great ideas, and Mr. Fraser for arguing with me!