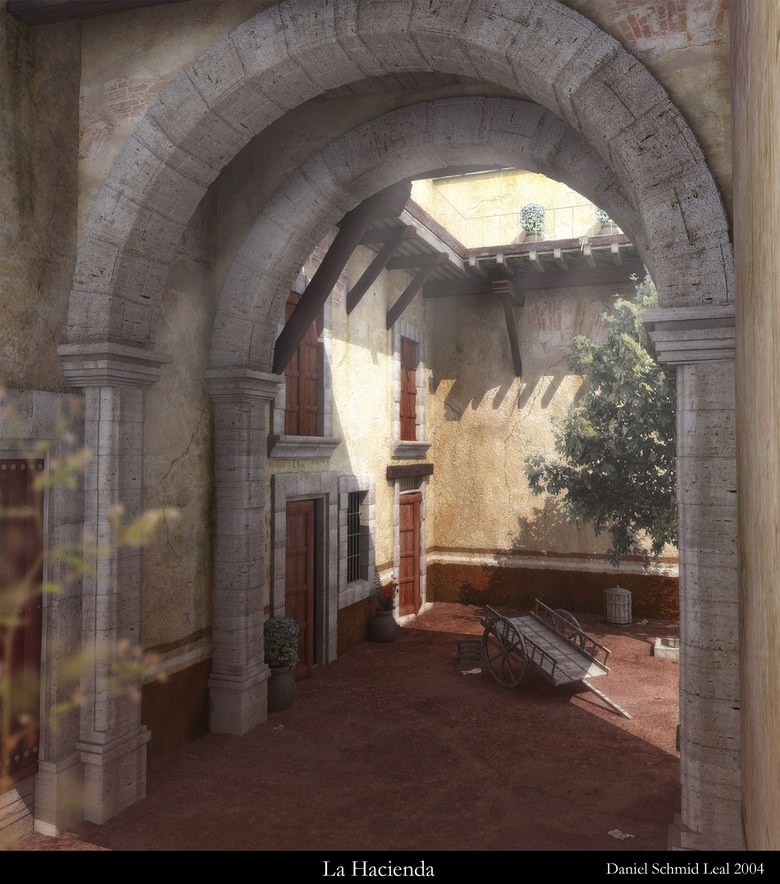 Hi there! Walking around I stepped in to a Guillermo Fernandez de Castro's Lithography, and a thought came to my mind: "that can be a nice render" and that's the inspiration for this tutorial. This scene took about 2 months of work, basically because I was using only my free time to work on it. I'll explain how it was made focusing in 3 important points: modeling, texturing, and lighting. If you take a closer look to the final render, you'll notice that the scene has a very simple structure, the walls, that are simple Editable Poly boxes with connected segments to create the windows and walls, just in case I needed to make some holes on them. 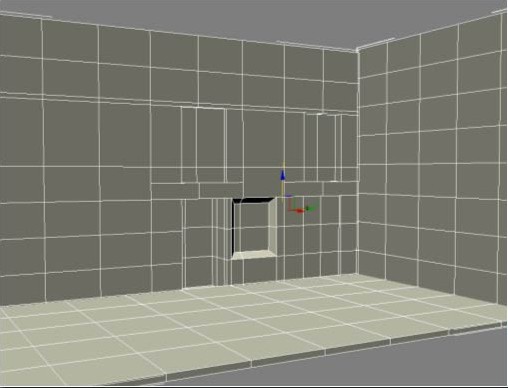 Once I finished the basic structure, that will define the proportion of the scene, I started to work on the balcony, and
alike all the work here, it's constructed by simple geometry. First I created the boxes that will define the floor, after that I installed the thin bars for the railway, wich are evenly spaced instanced splines. 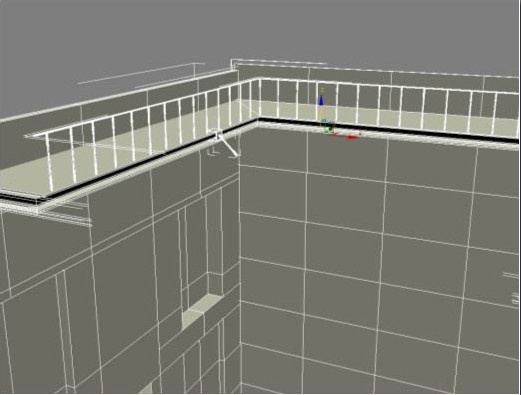 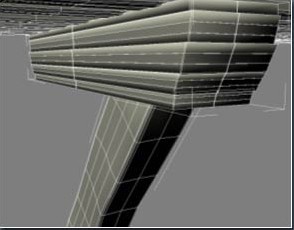 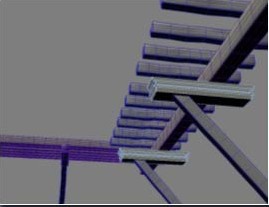 After the balcony was finished, the next step was to create the larger wood elements, you need to be very careful to make
sure everything has chamfer edges and none of the elements are perfect, because of this I applied a noise modifier to
all the pieces, with this in mind I could add some chaos on the scene. I created groups of chamfered boxes and some other pieces with noise applied so I can use them later in the scene.

A very important point with the noise modifier is to use different seeds and roughness so the pieces dont look similar. 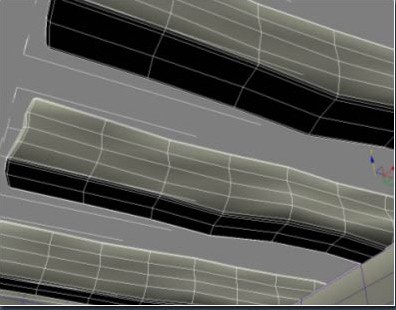 Once this was finished the hard (and tedious) work began, I had to model all the stones for the windows frames, doors and columns. Of course you also have to take special care with chanfers/bevels in the rock pieces; for some of the pieces i used a spline creation method and then a bevel modifier did the part of both: extruding and beveling. 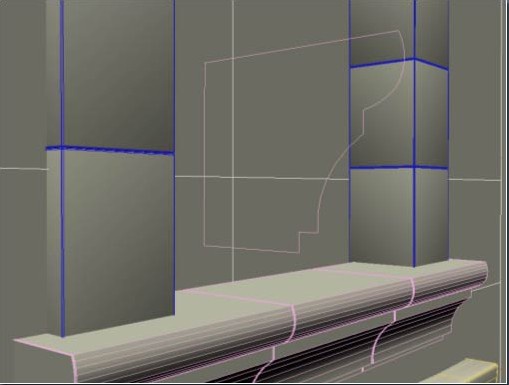 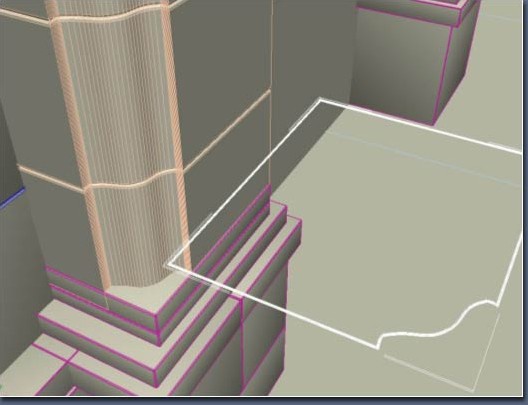 In certain part of the columns i used a TAPER modifier to add variation. 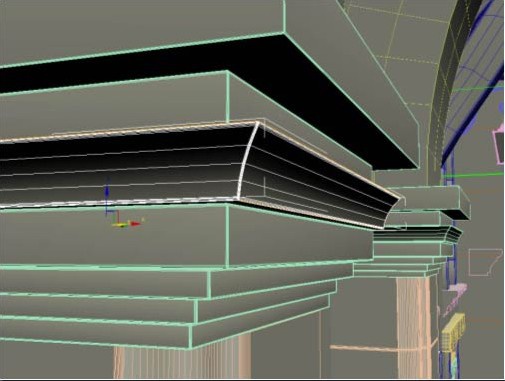 After finishing up the cloning stuff period it was time to shape all the work andthis began with the arc modeling.

First i created the wall which is just an extruded spline.

After that and for mapping intentions, i modeled the arcs using LOFT and a simple spline to create the arc; a rectangle was used as the lofted shape. 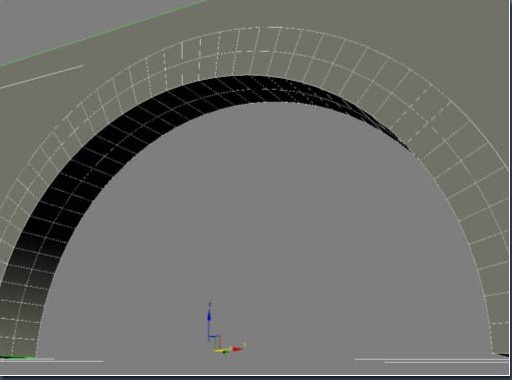 The next thing on the list was to add nice things to the modeling stage until; i modeled a bucket, a wooden box and little gardener. 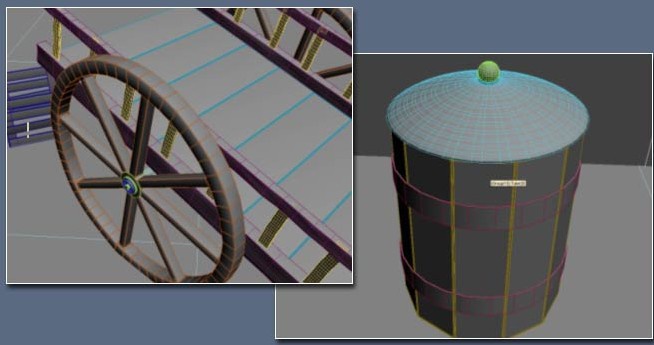 To this point the modeling part was over and now we move on to my favorite activity: TEXTURES AND LIGTHING!!! 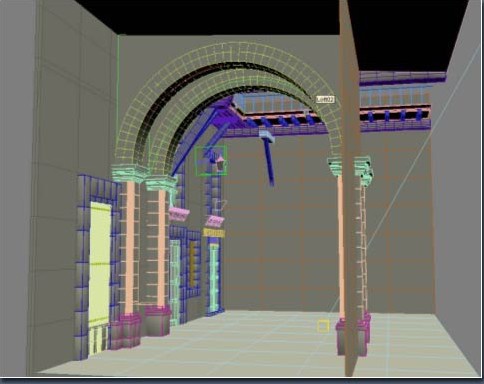 When i pictured the finished scene i always imagined it with dirty textures but not that much. I knew the Bump map had to be fine enough to make it look nice, also y knew i wanted some of the walls to show their inside bricks so, i focused on that. 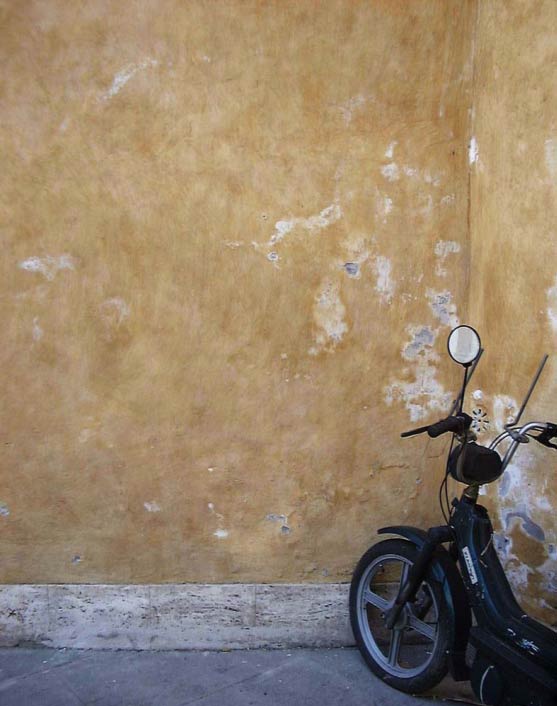 I like to work always with real reference that's why i'm always looking here and there for the things i'd like and i want to get done; i focused in taking a wall's particular style but not to imitate it.
This is my reference picture (left).
Â
At this point i used a texture piece as a base and eventually added various layers with different modes. 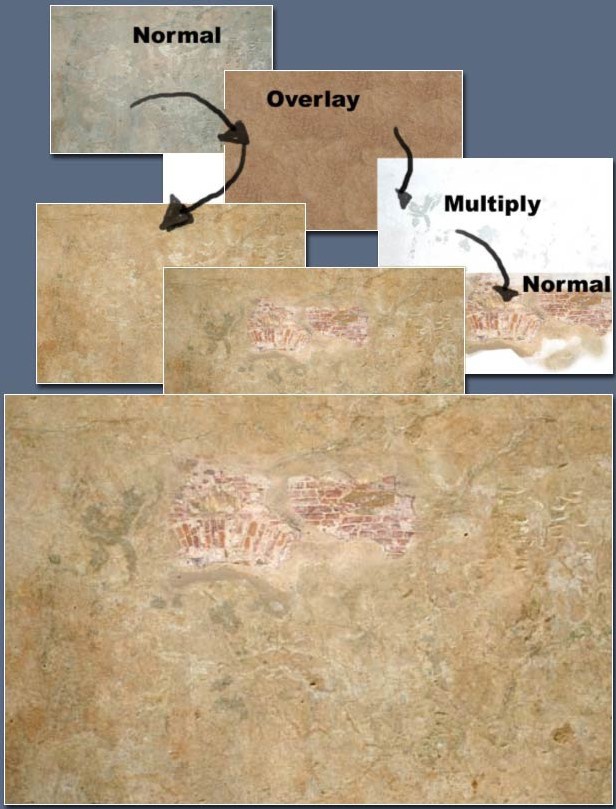 I take a screenshot and I work whit this 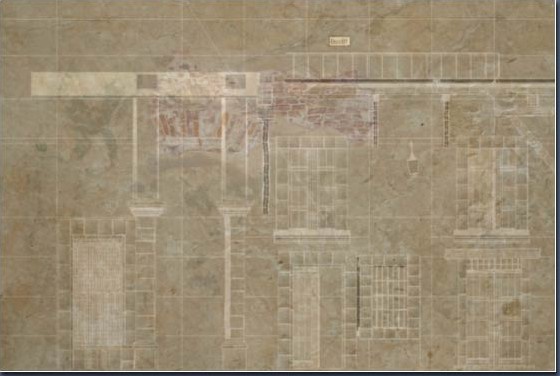 Now is the time when i added very important details as moisture, dirt, dripping, etc. 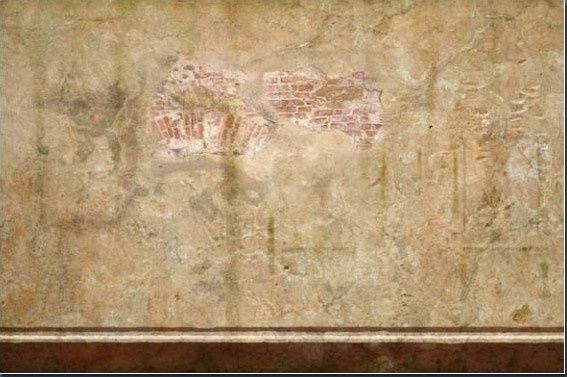 Considering the camera's perspective i knew i didn't have to paint another wall texture because moving the uvw map Gizmo in most of the walls mapped with the same picture did the work for me; this can't really be appreciated so a little trick to
save time/effort.
Now my attention was on the rock texture in my scene so i used a rock texture as a base and then i painted a brick pattern over it. It would help in the arc displacement. 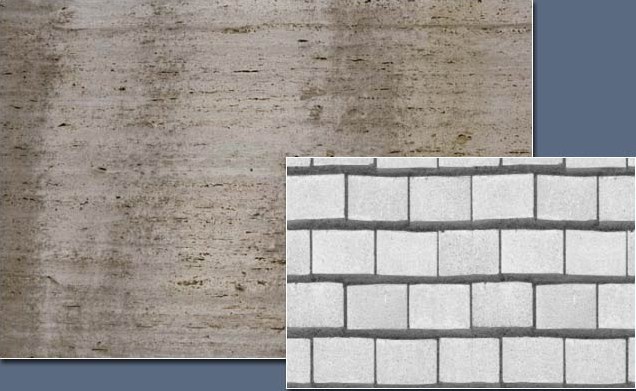 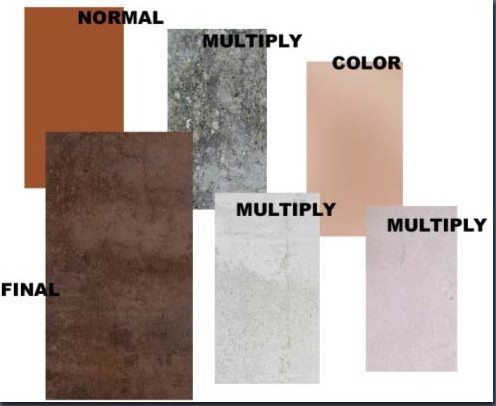 Just as i did it with the wall's texture, i used this texture for all the rock parts in my scene and i only had to move the UVW map gizmo.

Same technique for the floor, i took a base texture and added, painted and retouched some layers.

In the lighting part i didn't want to go on trouble because the scene is an outside one and i just need a key light (sun) and an ambient light. In MAX i used a direct yellow light as the sun and choose a blue environment.

For more on lighting with Vray I recommend this excellent site: 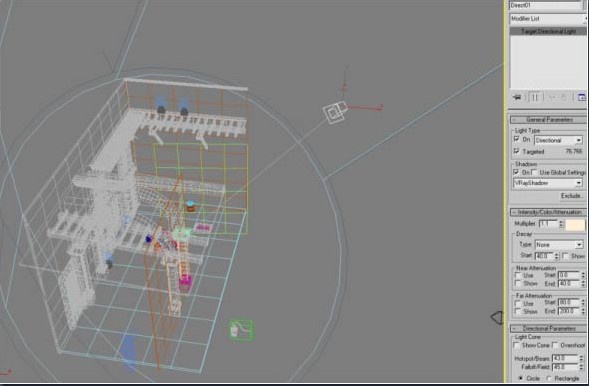 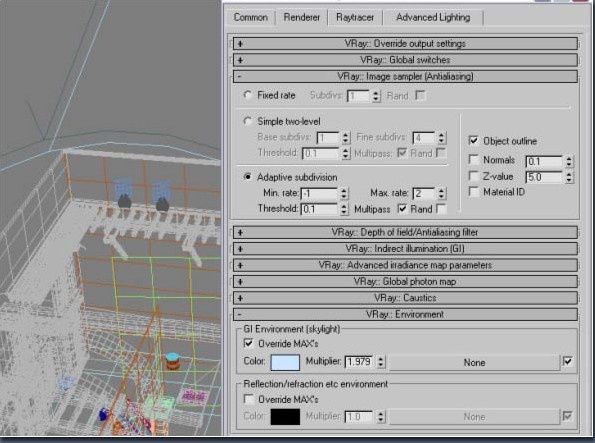 This lighting stuff is a little complex. In this scene i played a lot with lighting and bounces' parameters. Testing and failing is what i like the most because you can check variations on the ambient while changing the setting.
Many people asked me about the vegetation and now I'm telling you how i did it. After being satisfied with lighting i ended up adding some planes with veg texture, like the plants and tree in the background.
Special care must be taken in the plane shadows. I used Vray shadows and an Opacity map to get nice projected shadows.

One of the steps i consider most important is the final retouch done in Photoshop.

After finishing i added little touches like Specular Blooms and some volumetric light render passes. 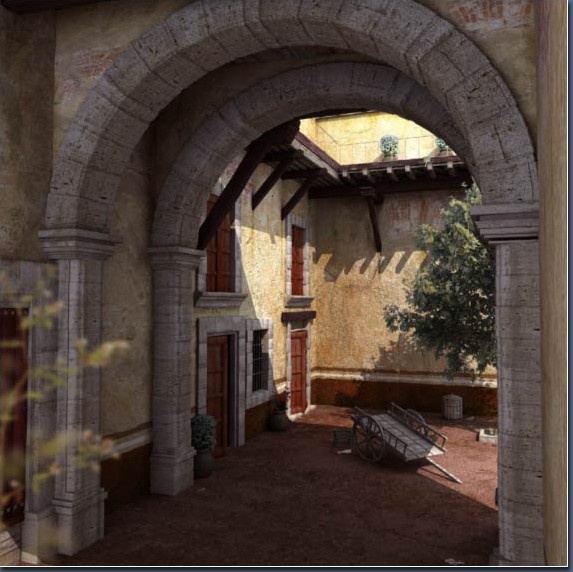 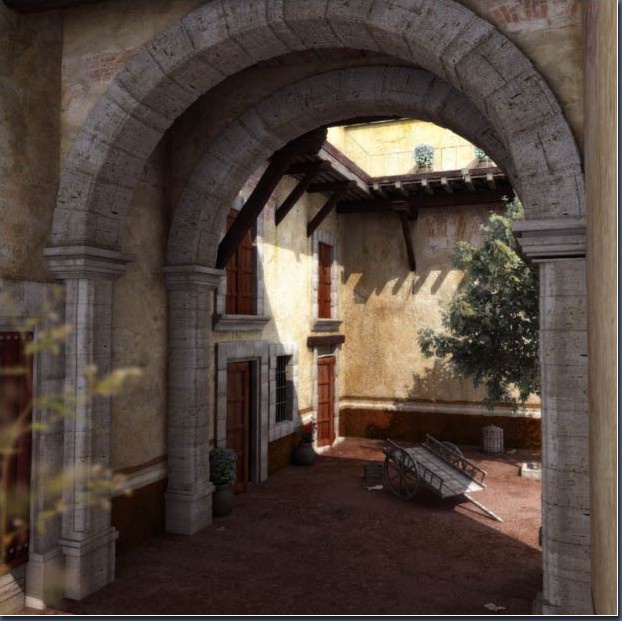 This is how we end the journey through the realization of "La Hacienda", i hope you liked it and find it useful for future works. Don't hesitate in mailing me for any reason: daniel@metacube.com.mx

Thank you very much 3dtotal.com!!! Good luck and happy renders.