Hi everyone, my name is Israel FornÃ©s and I have been invited to show you how and why I produced the piece "K.A.O.S. Submarine Control Room". I hope you enjoy this Making Of - here goes!

First of all, the idea to make a submarine came from a project me and my team are currently preparing, which is the continuation of a job we did this January. You can see it in my page: http://www.israelfornes.com/forque09.html

For the first movie we did a car chase in the desert, without too much detail and only one month for the blue screen shooting and construction. But in our current project, we plan to do five more movies in a similar style, but different locations, inspired by the classics of cinema: Western, Sci-Fi, World War, B/W etc.

The image I am going to explain is from the World War movie. Everything is planned to make a deep ocean naval fight with ships and submarines. And the bad guys have a submarine - the K.A.O.S Submarine.

The references are old and new submarines images I found on Google (Fig. 01) The idea was to tell the story in today's present, but to also give the image an old fashioned look. This mix gave us a wide range of styles and was very fun to work with. 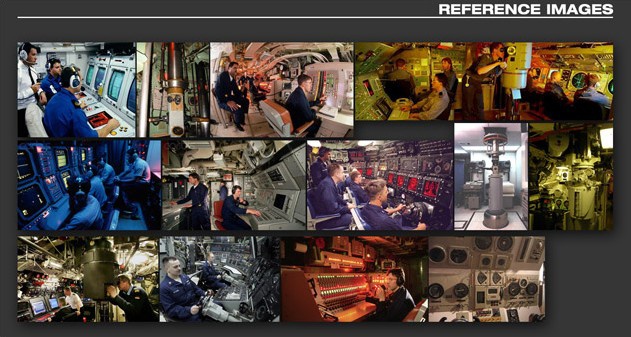 After first step, finding the references, I started the modelling. Normally I make paintings on paper for the designs, but in this case I only did one or two sketches and just started modelling the main body of the submarine (the floor, walls, and basic environment) to get the proportion of things. I used Silo 2 for the modelling (Fig.02), which is a very good program, easy to learn and, very importantly, let me save the model in the original .fac Electric Image format. 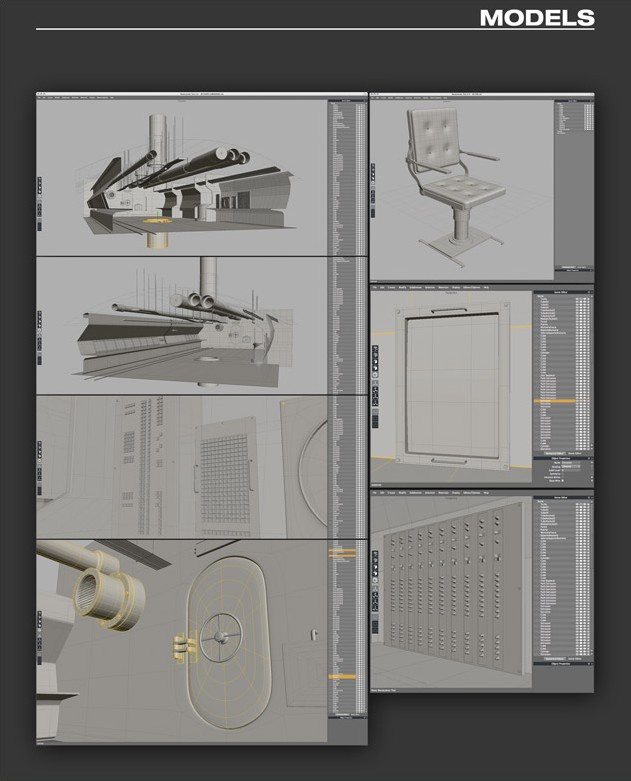 Some components, like the chair or the periscope, were modelled in separate scenes to allow me to move them around freely and model them in detail, but all the rest of the screens, buttons, boxes, cables etc were modelled in the same main scene. In Silo 2, I modelled in low res and when the model was ready for export, I subdivided the objects depending on the need of it. When all of this was done, I exported the model and reverted to the original low res version. The best thing about making everything in the same scene is that I was able to change things or add new models, place them in the set and export them to EI, and the object would be placed in the same place. This isn't new, but it is very useful when your 3D application doesn't have a modelling section, like Maya, LightWave, Softimage, C4D, 3ds Max ...

When modelling was done, it was time to prepare the textures. This stage was very time-consuming because I knew that the final use for the image was going to be in a movie and so things like the data screens, sonar and lights would have to be animated (Fig.03). Most of the button panels were flat and I made the diffuse mapping as a still image of the console, and only the lights were made in After Effects. The cycles were in a five second loop and projected as luminance to give the illusion of light. 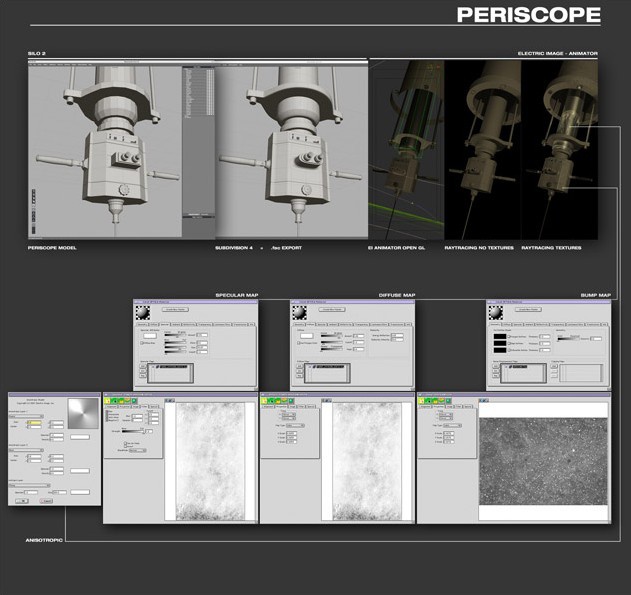 The rest of the textures were made in Photoshop, from personal libraries. Normally I have a Diffuse map, Specular map, Reflection map if needed, and a Bump/Displace map to give more reality to the surfaces (Fig.04). 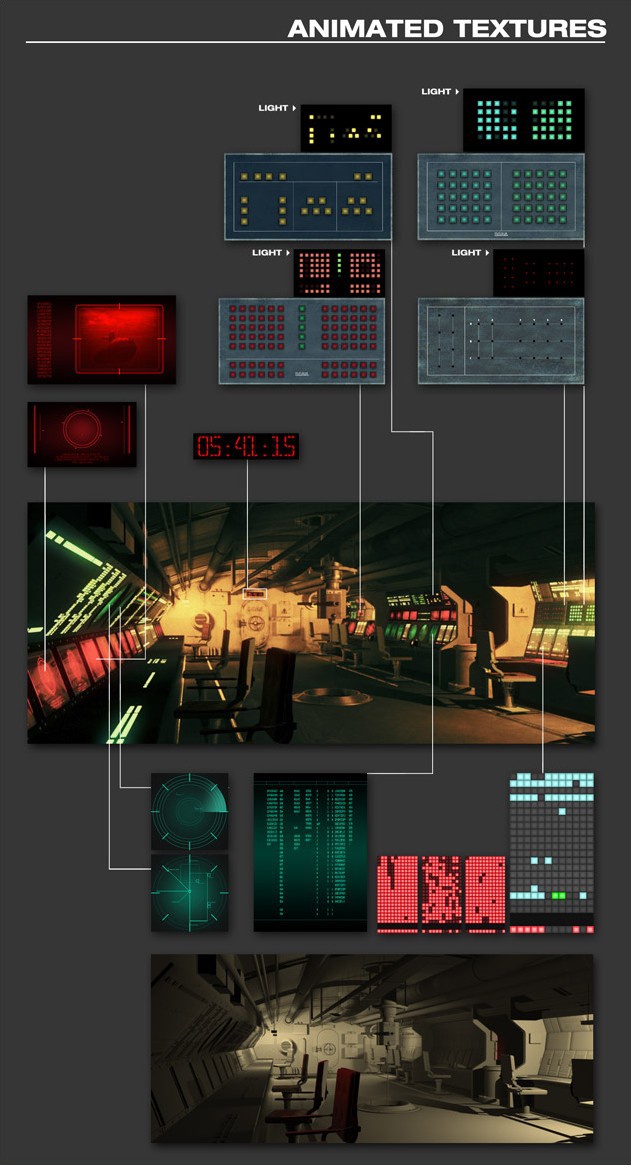 I don't like to use shaders for diffuse, things like cammo, or noise - I prefer to customise everything for each project - but in some cases, you need shaders like Anisotropic to make, in this case, special specular metal effects.

The next step was to illuminate the set (Fig. 05). I wanted to have half-lit, ambient light, with places where the light was coming off the screens and other places that were lit directly, making hard shadows. I also wanted to use diffuse lights in the background, with soft shadows and dome lights. 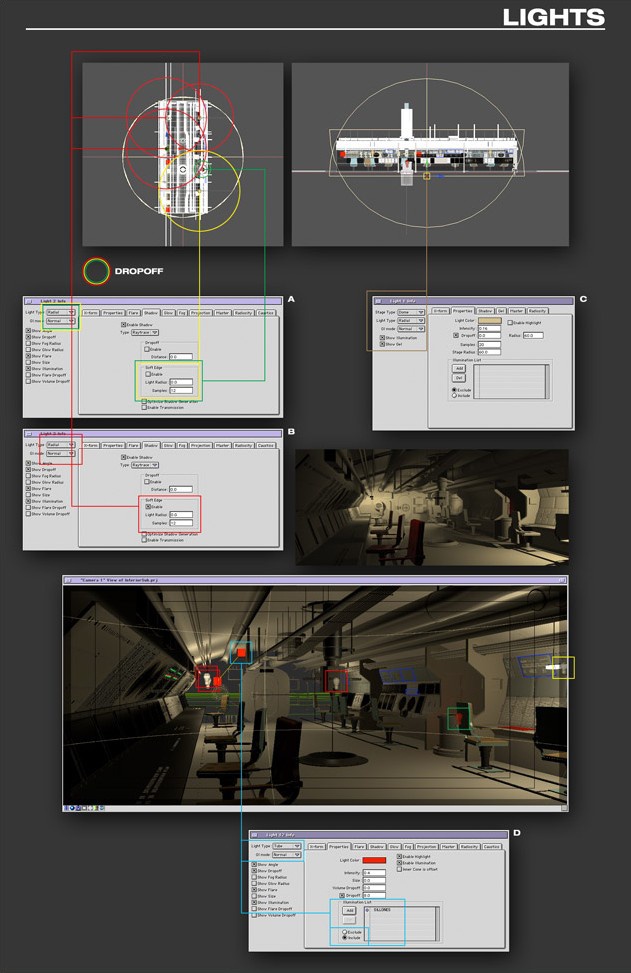 I ended up using four different kinds of lights:

Because all of the lights had small radius drop-offs, some parts of the set would be in total darkness, aside from the light panels and screens. This is why I placed two illuminator lights into the scene, with an intensity of 16%, one on the north-facing sides and the other on the south-facing sides.

Rendering was the next step. This project was rendered in Raytracing with the EI Camera and the following parameters:

I did some renderings for this Making Of (Fig.06), such as wireframe and without textures, but the rest were made for a particular purpose. For example, the DOF pass as a camera blur mask and smoke, to give interactive ambience to the shot. 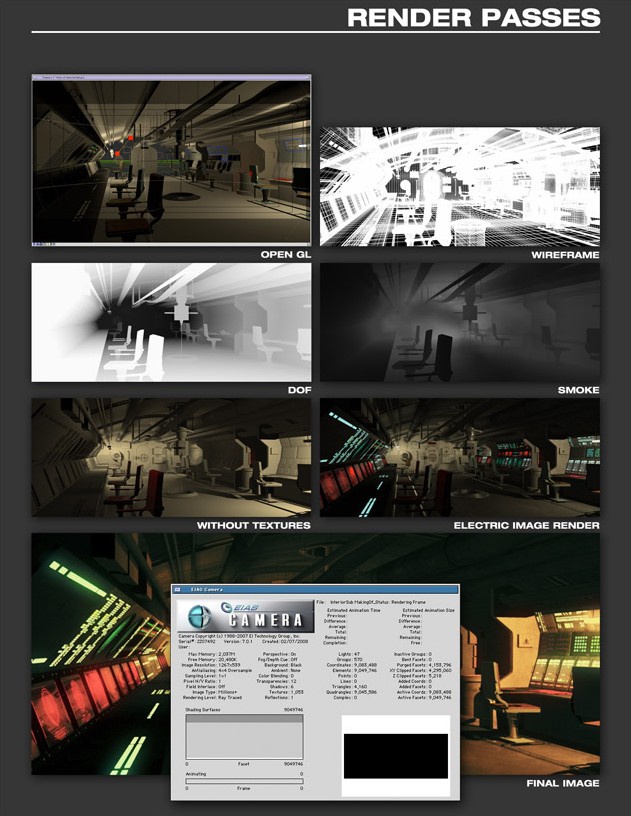 When the render was completed, the next objective was After Effects (Fig.07). Because this project has motion and will have real people around, interacting with the 3D set, chairs, panels etc, here is where I gave the final touches to the image. In this case, as you can see from Fig.06, the electric image render image is what I got from the 3D program, so I wanted glow in the lights, to defocus the background, add smoke and grade the image. 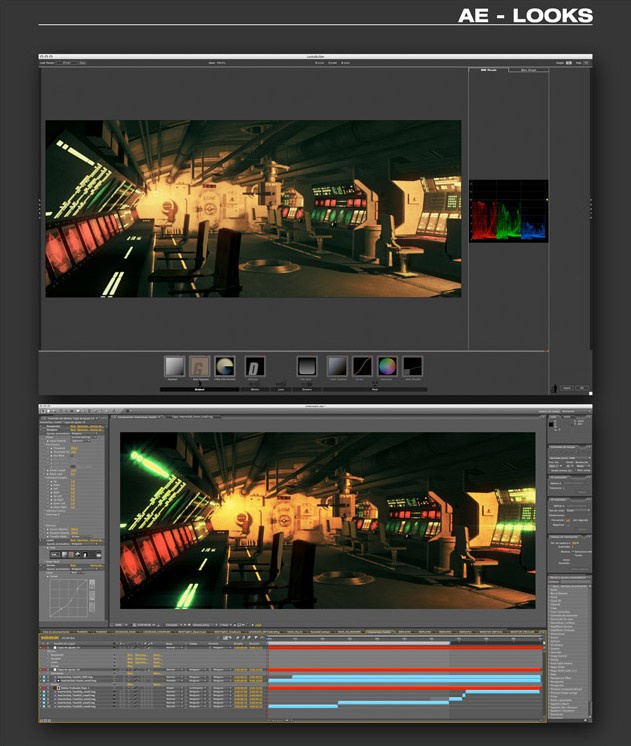 With the render passes, I was able to blend the smoke with the rendered image and tint it with the tone for the final mood. I added the blur where I wanted with the DOF/FOG pass and then used both After Effects Glow and Trapcode Starglow for the lights. To grade the image, I used Looks, and in the upper screenshot you can see the colour levels and settings that I applied to slightly change the final ambience and colours for the shot. Some kind of oppressive ambience with old and high-tech technology gives a nice starting point for compositing with actors.

I hope you've enjoyed this Making Of "K.A.O.S Submarine Control Room" - it was a pleasure to share this project with you. Here you have four frames of the animation I did for this image, so you have different angles to view (Fig.08). Â Thanks a lot to all of you, and may the Force be with you! 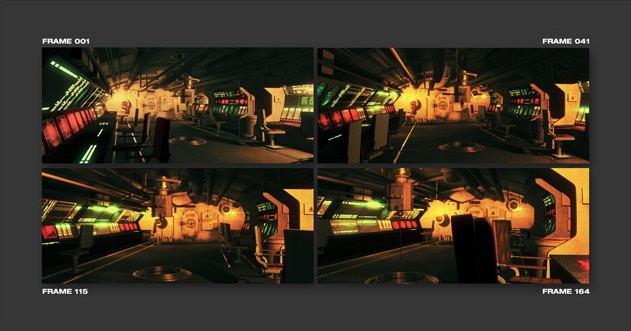