The Colour Channel of the Terrain

After Ben from 3dtotal contacted us, Sebastian and me sat together brainstorming of what Scene we want to create to represent the new Texture CD Vol. 10. Since it was about Plants and Trees, it was near that we did a landscape scene. Sebastian wanted some water in, I wanted leaf's flying around. At first we started with the main landscape shapes, the position of the water, basically the main scene layout. You can see a screenshot of the final scene below. 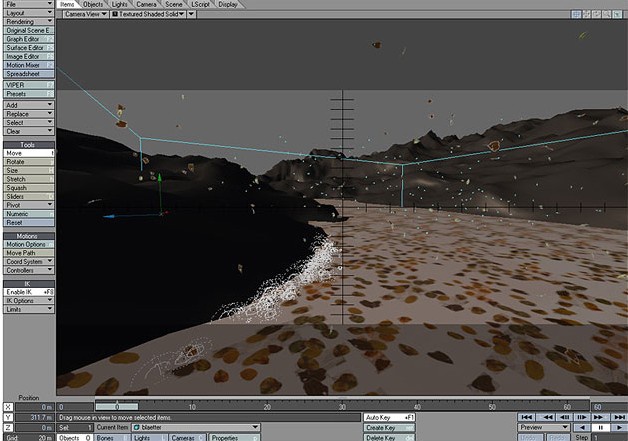 The Landscape object is a simple plane, subdivided, tripled and then subpatched. We then applied a couple of Displacement Maps to it. 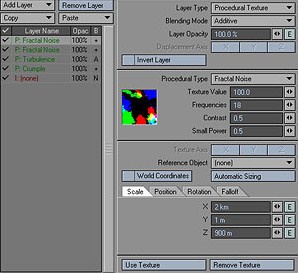 I won't go in detail about the displacement maps as they're not really the important thing in the scene. The trick here is to combine several maps and not just use on.After the shape of the landscape was done, we went texturing it. The texture consists of a colour, a bump and a specular map, with the colour map being the most complicated one.

The Colour Channel of the Terrain 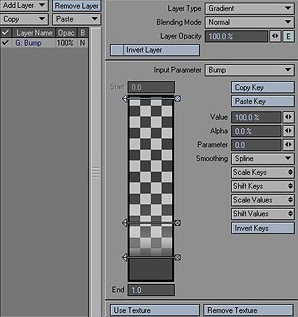 After the landscape was done, we textured the water. For this, we used Lightwave's Real Fresnel shader and the colour filter ability of Lightwave's Advanced tab to make it look like water. 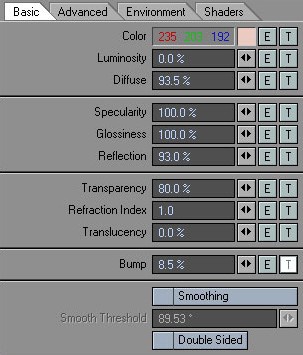 Overview of the Water surface 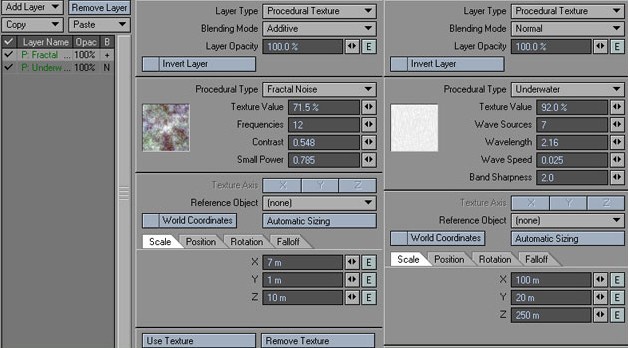 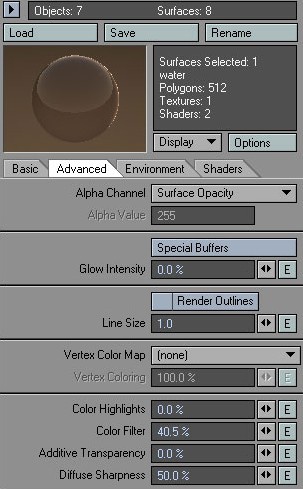 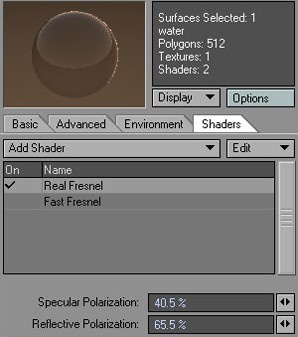 After that we had a landscape with some water. But where's the Textures, you ask?
Next was my idea of leaves flying in the air, as it usually happens in Autumn when leaves are falling off the trees.
For this we decided to use Lightwave's Particle system to get randomness and connect it using FX_Linker with leaves.
We created three different kind of leaves, using the textures of the Total Textures Vol. 10 CD. The textures were simply mapped upon a three-poly object. 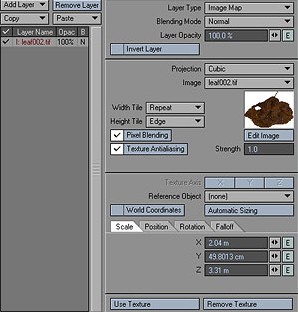 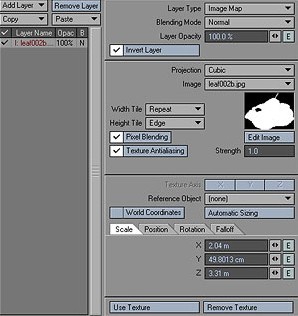 I'm only giving one example here, the other two leaves were created the same way.As I already wrote above, we used the PFX with FX_Linker to place and rotate the leaves randomly in the scene. We simply created one particle emitter with 300 points and used FX_Linker three times on it (100 clones of each leaf). 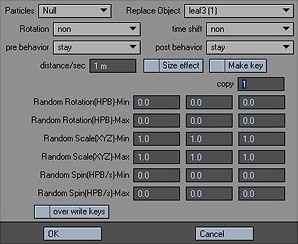 Now we got a Landscape with Water and leaves flying around. Next was to simulate leaves on the water. For this, we took the leaves we used for the Particle System and created a new texture in Photoshop, combining all of them. 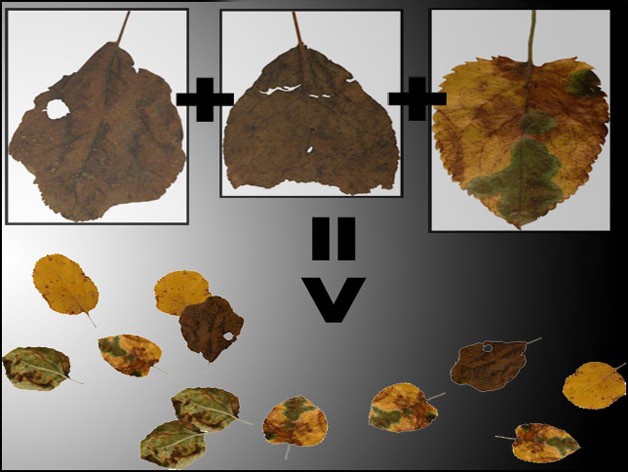 The new texture was then mapped upon a clone of the water surface.To get randomness in the positioning of the leave's, we used a Turbulence in the transparency Channel. 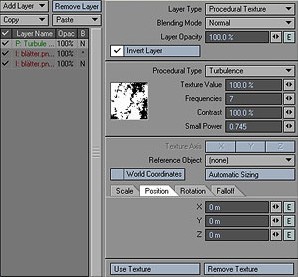 To add more detail to the scene, Sebastian suggested to add rocks around the shore of the lake. We used a simple, hand-sprayed particle and Hypervoxels. 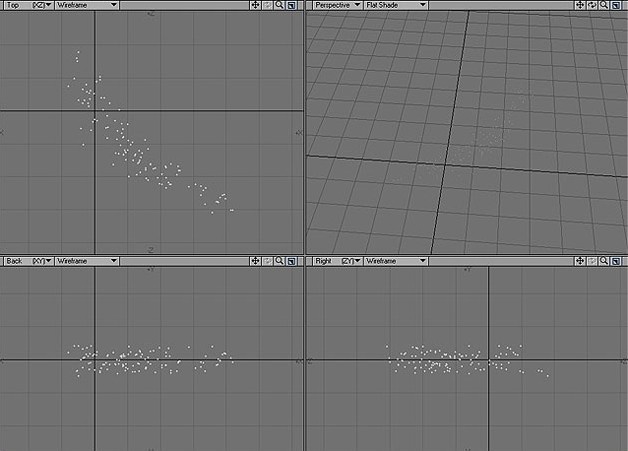 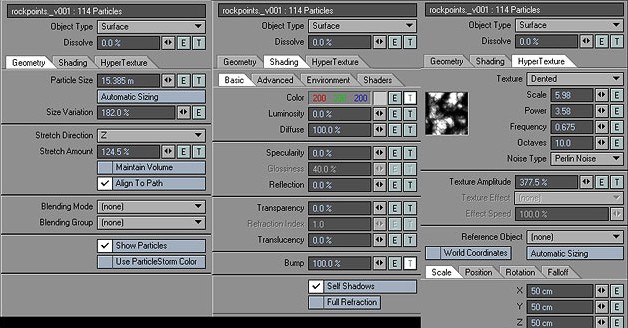 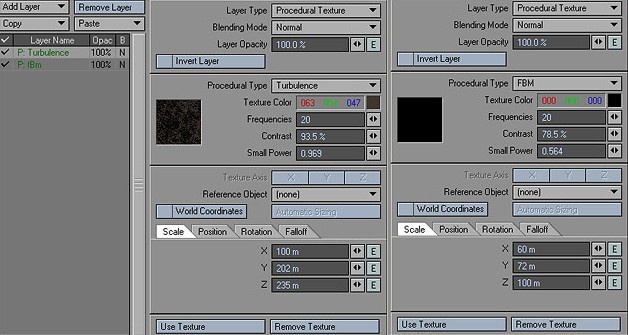 The Colour Surface of the HV's

Now we had a almost complete scene, ready for rendering. Lighting was done using a shadow mapped Spotlight, Ambient light and Radiosity. It took about two hours to render. Only thing missing now were the Trees. After a lot a try & error, we decided to paste the trees (we wanted them good visible in the scene, not just in the background) in using Photoshop as rendering them in Lightwave didn't gave us the control and result we were out for.

The next step was to modify the picture in Photoshop and paste the trees. First step was to create a fog to add more depth. For this we used the Depth Channel which Lightwave's Frame Buffer View produced.
We painted out the shape's of the leaves, got rid of the dark area's (representing what is in front of the picture),
used gaussian blur to blur the shape we had and added it to the render as fog.
After the Fog was added, we did some colour correction and inserted a sky which Sebastian had shot the day before out on the fields next to our town.
Next was the addition of trees. To make a long text shorter, we'll simply show you all the layer's the final picture consists of.

The title means that this is picture represents the third time of the year, Autumn, with it's usual temperature.
We're also working on part I, II and IV, representing Spring, Summer and Winter.
We hope that you enjoyed this Walkthrough and the Picture we created. Thanks to Total Texture's for releasing amazing textures.