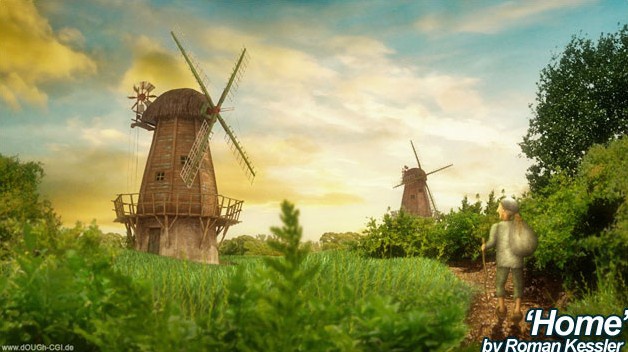 This is a very simple scene. There are only 2 "real" Objects in the scene, the windmill and the homecoming man. The ground is a very simple subpatched object. The footpath has a few more polygons to create bumps and holes. All the bigger Plants, as well as the long grass, are planes with textures from the Total-Textures v10. The small grass was made with Sasquatch. 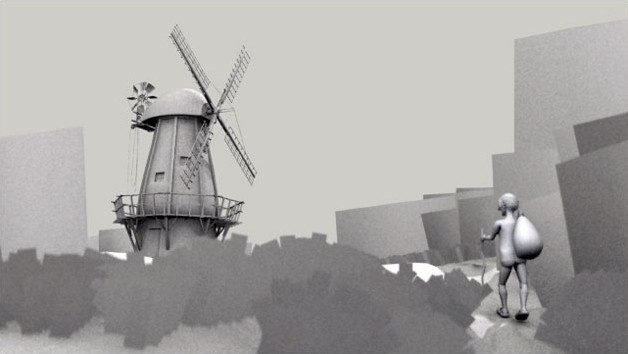 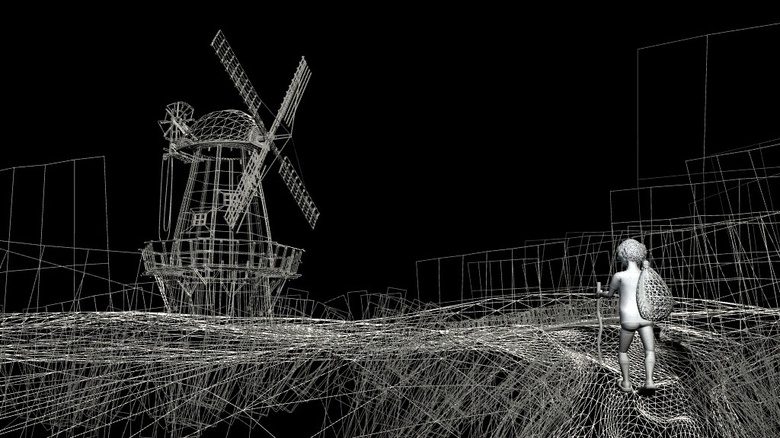 Modelling and Texturing of the Windmill was very easy, as well. Only simple geometric forms were put together. The stone-part of the mill is a cylinder, taper to the top. The wood-part is an 8 sided disc, extruded to the softly curved shape. The roof is made from a box, extruded into front and back.

The windows were bevelled into the wood-part. Simple boxes made the window-Frame. 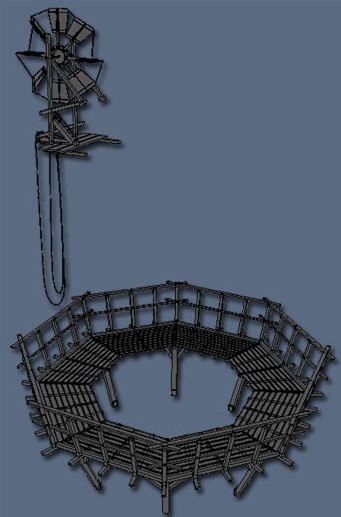 The balcony was made for one of the 8 sides, by placing UV-mapped boxes. The same box was used all over. After the part was finished, it was copied and rotated around the y axis.

The small wind wheel was made by an extruded plane for the shovel, attached to a few boxes - and these were attached to metal rod. This part was rotated and cloned around the axis the wind wheel turns around. With every copy, the shovel was turned for 45 degrees. The ropes were made with a box using path-extrude. The object was subpatched afterwards.

Other objects like small bevelled discs and a few rivets are placed on the wind wheel, to add some detail.

For the big wind wheel, only one wing was made and copied when it was finished. 3 Boxes were placed on top of each other to make a stable looking main part. Smaller boxes were attached to the main part to make the wing complete. Details like the ropes were made with path-extrude 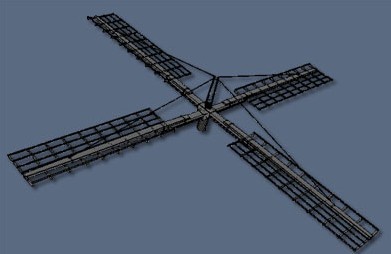 Since most parts already had UV-Maps on, Texturing of the windmill was very fast done - I was using Textures from another the Total Textures CD (v2). The stone and wood part of the windmill where Textured using cylindrical projection. I used only the colour map and the bump map from the CD, the bump map was also used for specularity.

For most of the wooded parts, I used the same Texture. A dirt map was added to make it look more irregular.

For the vegetation, simple UV-mapped planes were placed along the ground wherever seen by the camera. The Texture was taken from the Total Textures V10. Four different textures were used for the grass, five different bush-Textures were used, and one single tree-map. The colour map was used, and the transparency was controlled via the alpha maps from the CD. 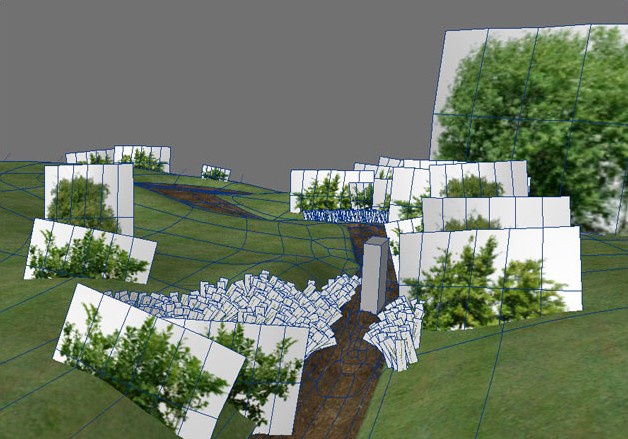 I choose to light my scene from behind to get soft shadows in front of the planes. It is a good way to ensure that the planes don't look flat. Also the shadows helped to add depth to the scene.

Sasquatch was used for the small grass. It also helped to make the planes appear like volumetric bushed.

For Rendering, DOF was used to make the foreground a little blurry. Radiosity was used for the windmills only. The two windmills were composed into the image in post work. For all renders the finished background was used.

Post work was a little complicated since I did not like the appearance of the man in the image. I painted him over, the result is much better now, but still not as good as I hoped. Also the footpath was painted over to create some stones.
After a lot of changes including colour-correction, blurring and other mixing I was finished. 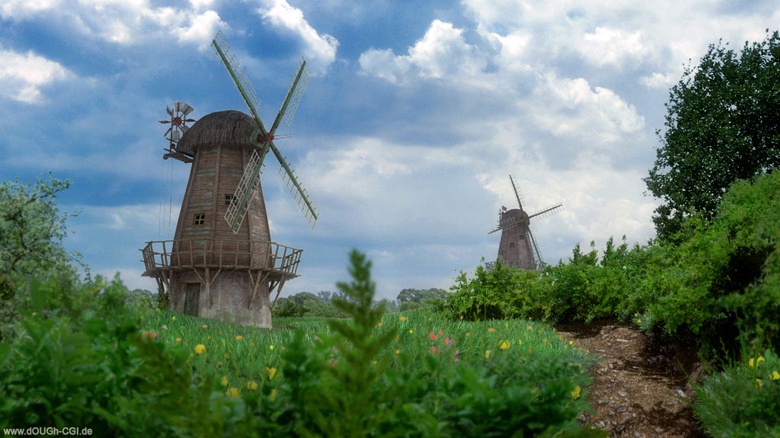 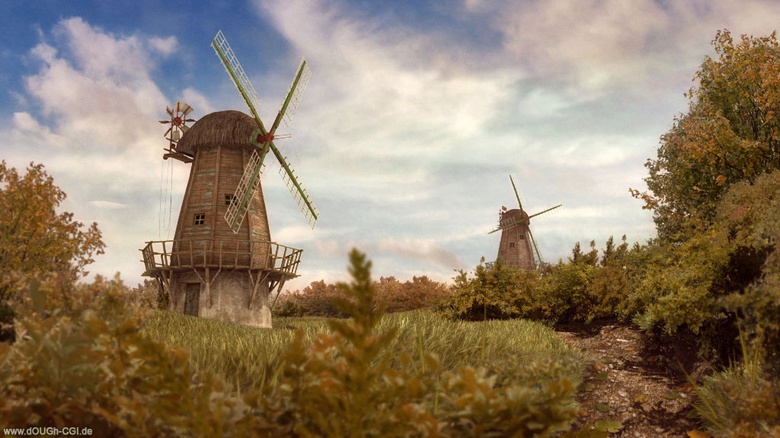 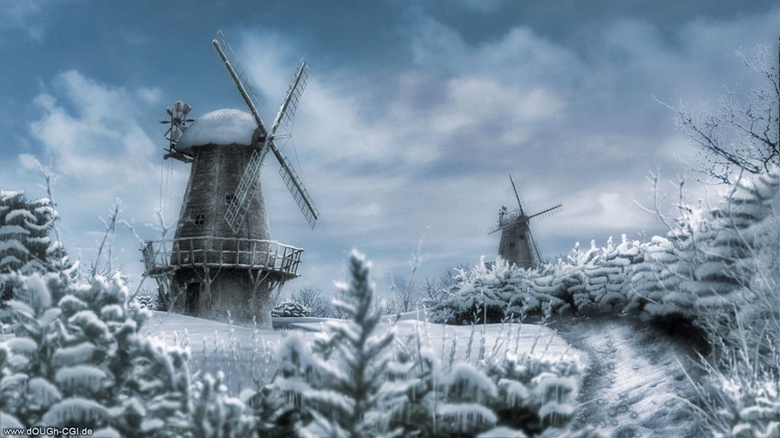 That's it. If you have any questions, feel free to contact me via my homepage.