In this Making Of I will tell you in detail how I made this work and I will try to show as much as I can about how these kind of works can be made (through my own techniques). When I got inspiration for this piece I was working on another picture and searching the web for references. When inspiration comes, it does not matter where it's coming from; I think it is very important to write it down (especially forms and colors). This is the picture that inspired this image and that I later based the composition on (Fig.01). Now I will show you my train of thought and my methods. 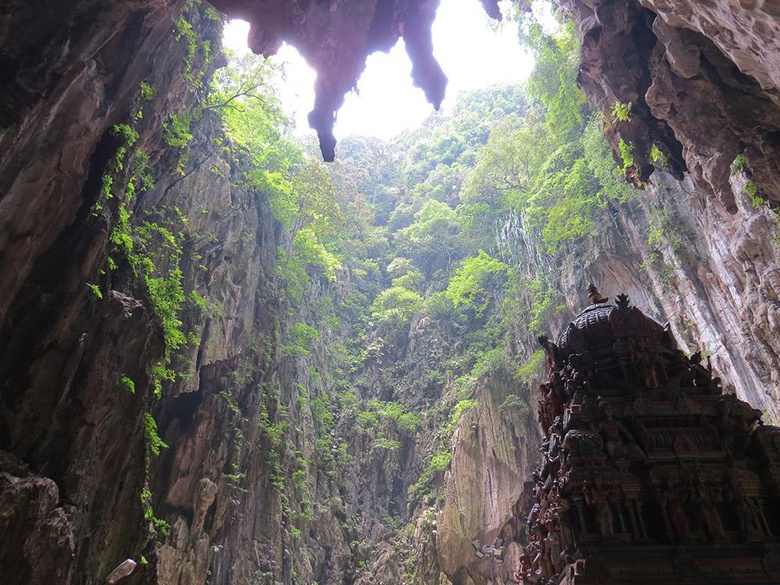 In the photo there was a hole in the top of a cave (the famous Batu Caves in Malaysia). This gave me the idea to create a huge and imaginary subterranean cave system. My goal was to make it as effective and realistic as I could.

I started by making a simple sketch based on my initial vision (Fig.02). This was the basis for my further work. I wanted to create a balanced composition, which looked roomy despite the limitations of the space. 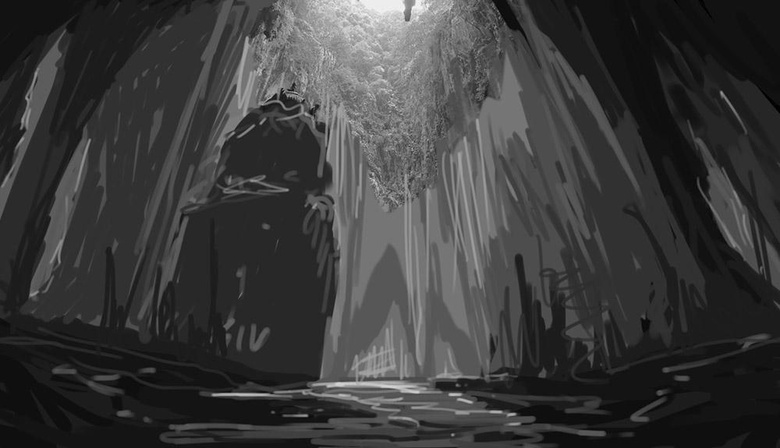 First, I created a new blank document and placed the main picture in it. I put the brightest part in the middle of the picture to lead the eye from there. Then I sketched my vision in black and white. I always plan in black and white, so I can later deal with the colors and because it is easier to set the light/shade differences. In this case, the colors of the base image were the benchmarks for every color modifications.

I used my favorite self-made brush for sketching, which imitates the texture of rocks (Fig.03). 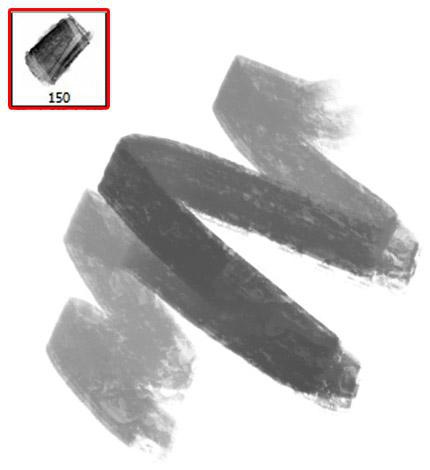 In Fig.04a - b you can see the pure composition with the planned eye leader lines. 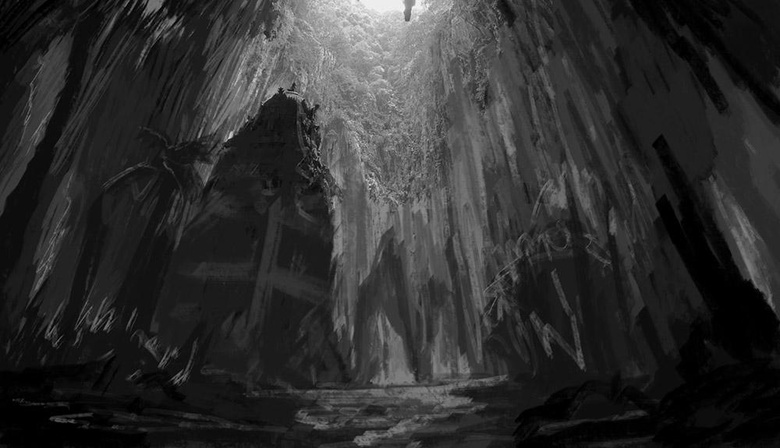 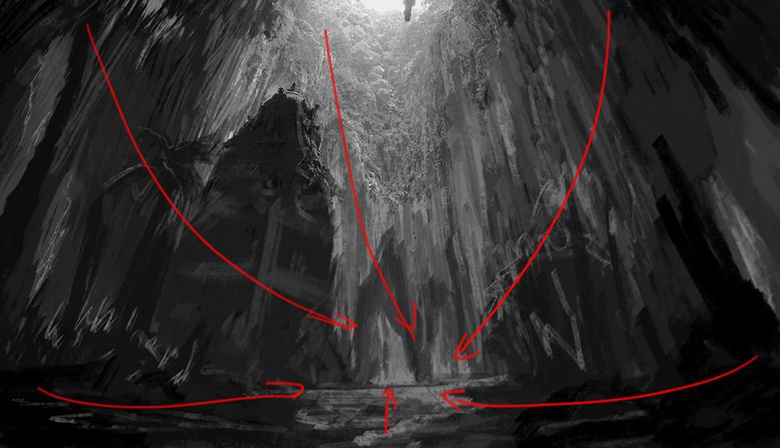 Then planning of the important objects began. The first element was the temple on the left-hand side (Fig.05). Because I could only see the roof in the picture, I had to design the rest of the building. First I was thinking about something traditional: a square building, in Far-Eastern style (1). Later I had another idea about a round structure that harmonized with the hole at the top of the cave (2). After a while I realized that neither idea was good enough, as they covered too much. I wanted to make the place behind the temple more visible. I decided to design a building standing on four columns, which is similar to the environment's rock pillars (3). Because of this solution the cliff behind the temple could be seen very well. 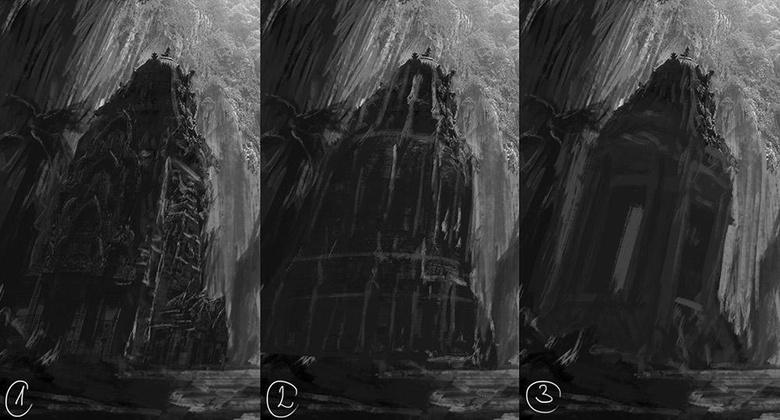 I imagined the right-hand side to be less toned, because I only needed it to make a balanced composition. First I planned to have only trees there, but I changed my mind because I needed a more expressive object. I was thinking about something simple and short, like a small column.

The creation of the natural environment was easier. In the middle of the picture we can look through an arch, to where the next chamber is. On both sides of the cave, there are columns instead of walls. Because of it the cave seems higher. I planned smaller objects in the foreground: trees, bushes, smaller rocks (using these elements, it is easier to lead the eyes). I imagined rocky protrusions which border the river in the middle of the composition (Fig.06). 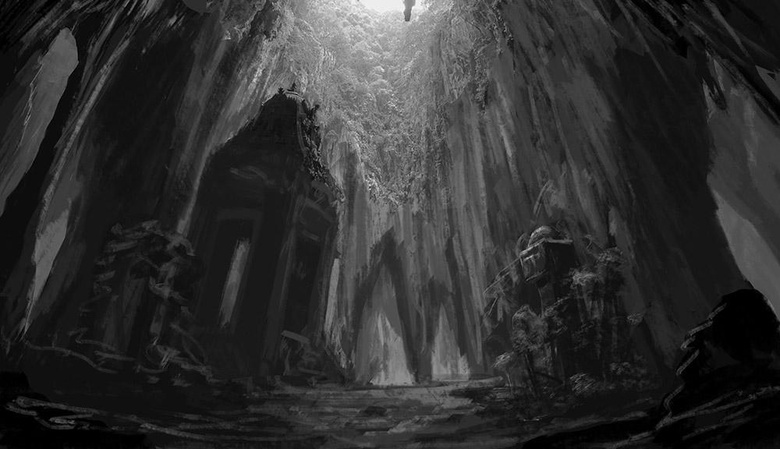 When I finished the planning process, I separated every layer and I grouped them by location. I always do this step, as it allows me to work more easily. Usually there are three or four groups; this time I used four. Everything was in the fourth group, which was located behind the basic picture; in the third group there was the basic picture with the two chimneys; in the second group there was the temple and both sides of the cave; and finally in the first group there were the things that are placed the closest to us (Fig.07). 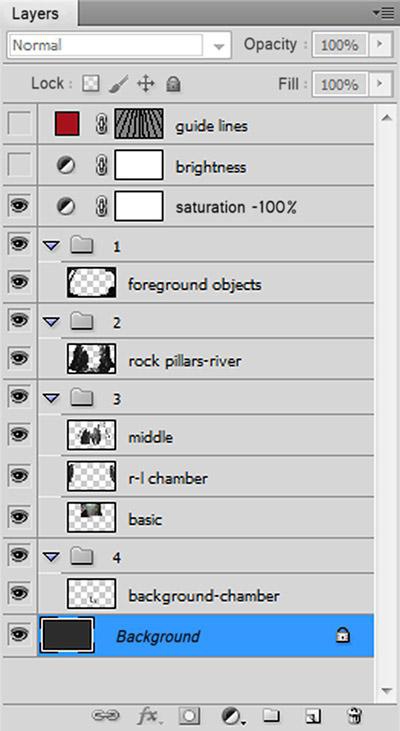 In my opinion the real challenge started now. I began to build up the picture from my stocks (Fig.08 - 11). To create pictures from photos, first of all you will need a certain number of useful stocks. Finding a good quality picture is usually very difficult, but there are several websites which can guarantee high quality stock photos (e.g., www.3dtotal.com or www.cgtextures.com). In my opinion you cannot have enough resources because the more options you have to choose from, the more unique and more detailed result you will get. If photos are merged you have to pay attention to achieving the correct perspective, scale and lighting. 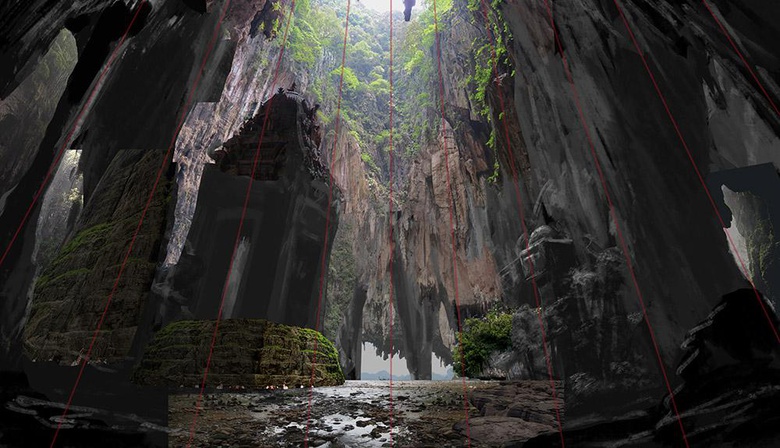 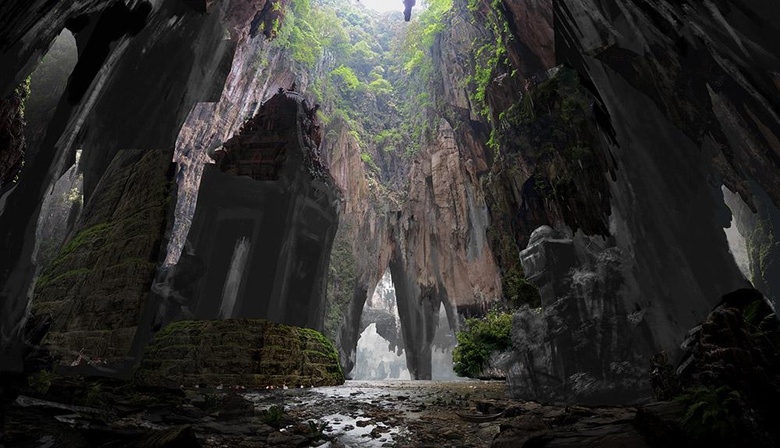 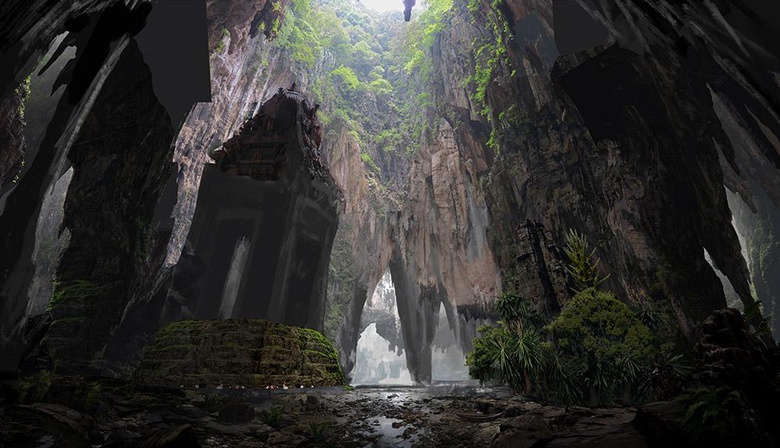 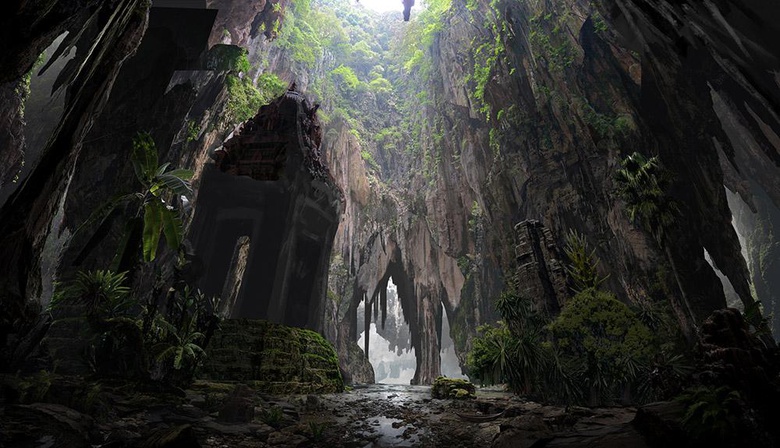 I have a good working method for merging photos perfectly. The first step after placing the photo is to decolorize the whole picture with a filter (Hue/Saturation > Saturation > 100%). Then I match the shadows/highlights to the original picture with tools like Levels and Brightness/Contrast. I hide the filter and I lighten the picture with another filter (Brightness/Contrast > Brightness > +80%). I match the colors to the colors of the environment (Color Balance and Hue/Saturation). After a few cuts, the placed photo looks part of the environment.

I will show the creation of the important parts in details. The first part was the temple on the left side; this was the most important one. I had the roof so I only had to search for resources for the columns. After I found two good pictures, I placed and matched them. Then I changed some parts to achieve a real 3D feeling (Fig.12). I thought the building looked bare so I decided to put a tree in the front of it. The building looked older now. After finishing it I created the steps and the pedestal (Fig.13). 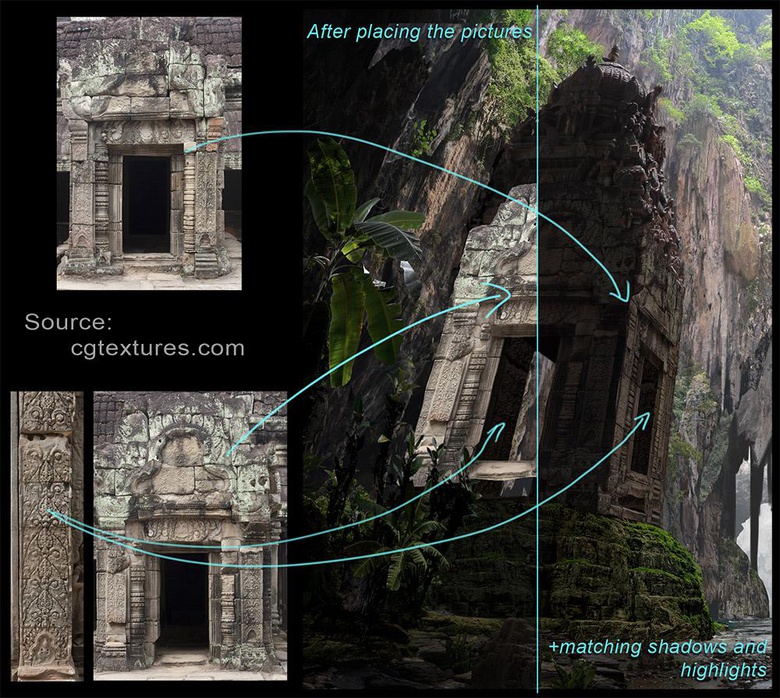 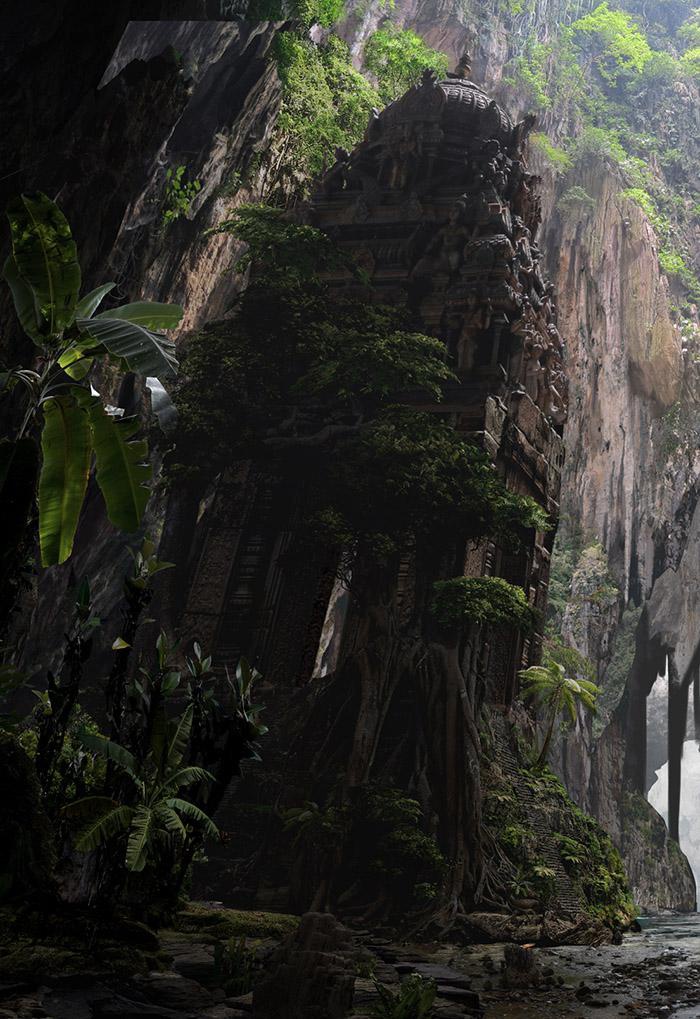 I had to search for some photos to fill in the missing parts of the picture. Some new pictures gave me some new ideas. I used two photos to build up the stone arches (Fig.14).

I flipped the picture horizontally to find mistakes. I recognized that the left side was lighter (Fig.15). The composition was not balanced. I had to widen the hole at the top of the cave; which helped to correct this (Fig.16). 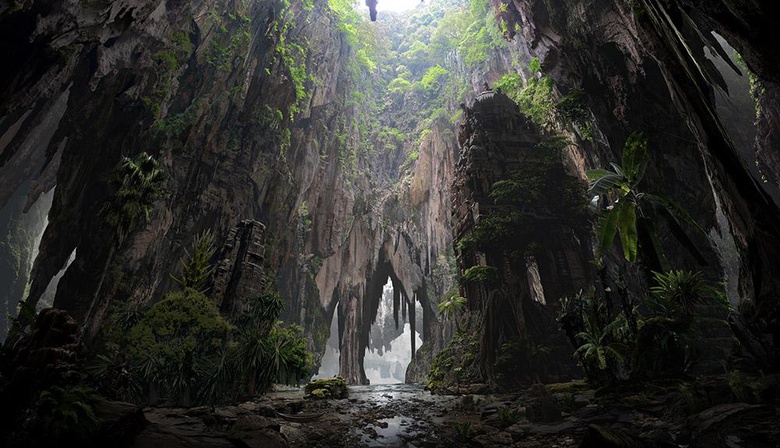 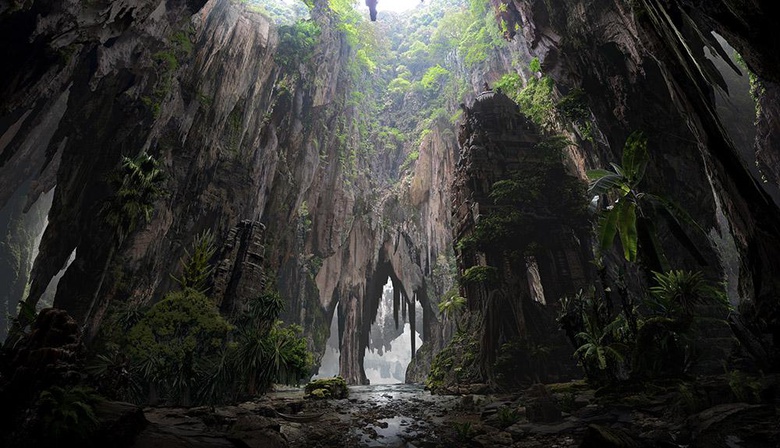 The building on the right side was not good enough for me so I started to redesign it. I found a perfect picture on the internet (Fig.17). I placed it and I made some modifications (Fig.18). Then I returned to the arch in the middle of the picture to finish it (Fig.19). 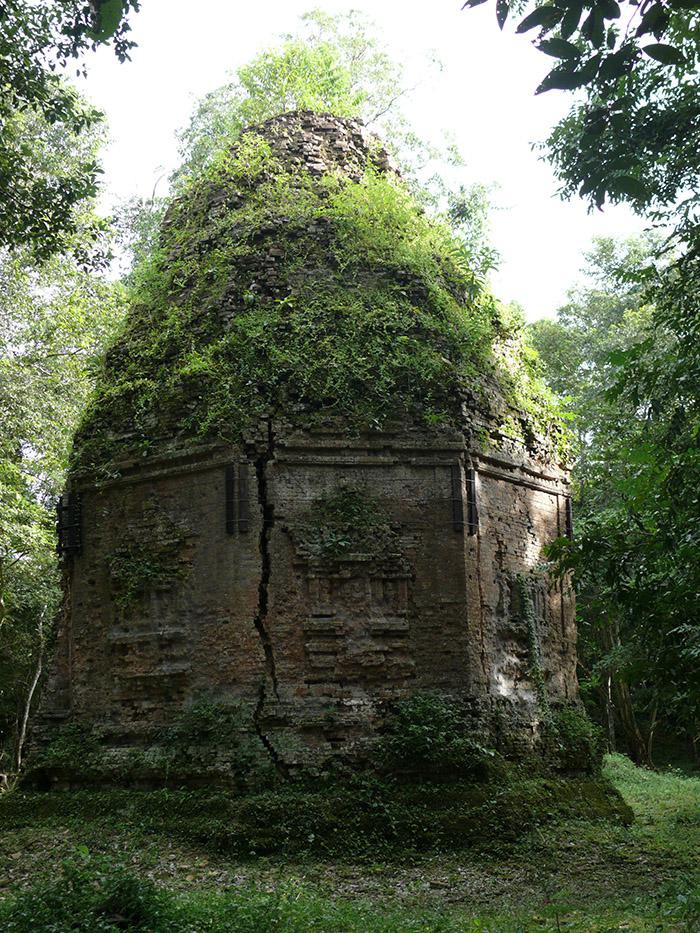 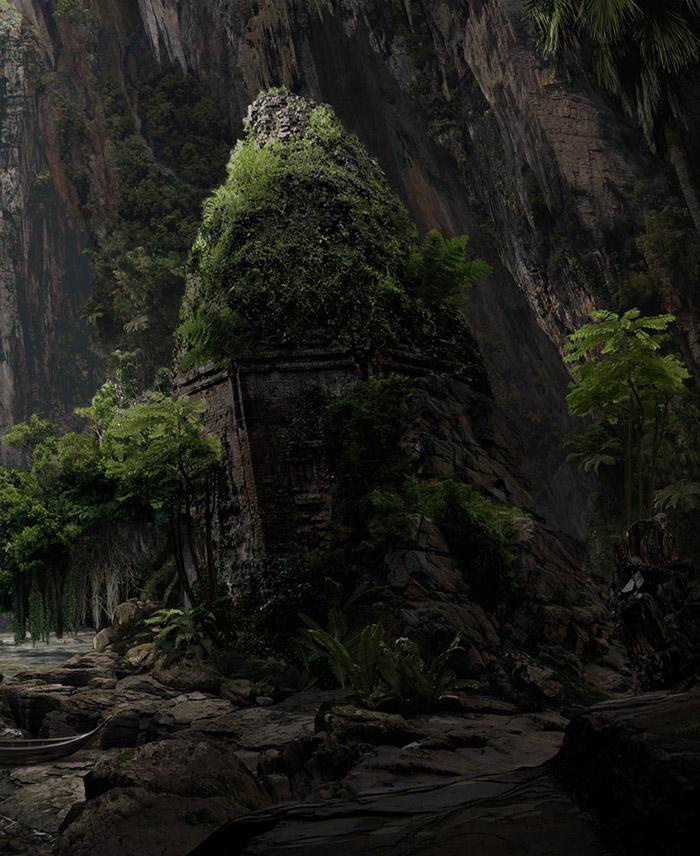 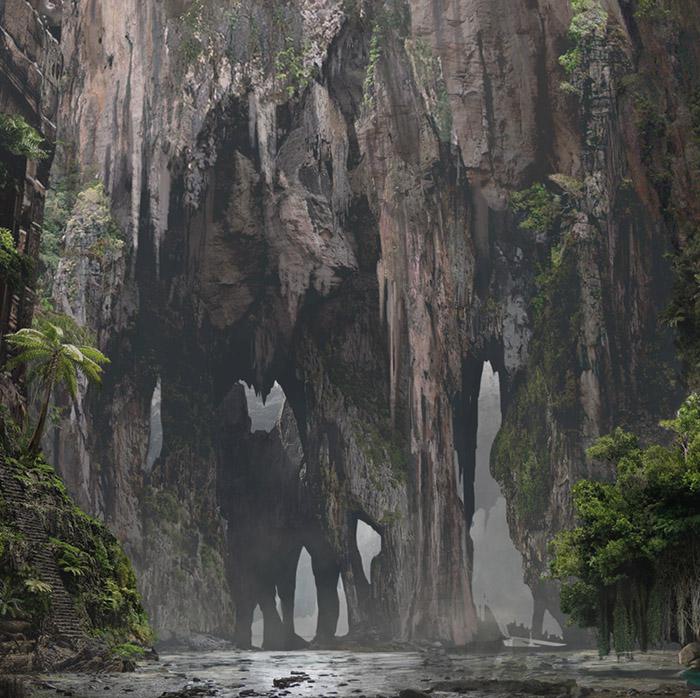 I did not have a deadline because this was a personal project. Because of this I could work on it as much as I wanted. I think that this is very important even if you have not got much time.

I placed a couple of plants in the right corner and started the final modifications. I painted fog between every layer group to make the distance between them more visible. I put lianas and climbers on both sides of the cave. Finally I painted the characters in a different picture in ten-fold magnification and placed them into the picture (Fig.20). 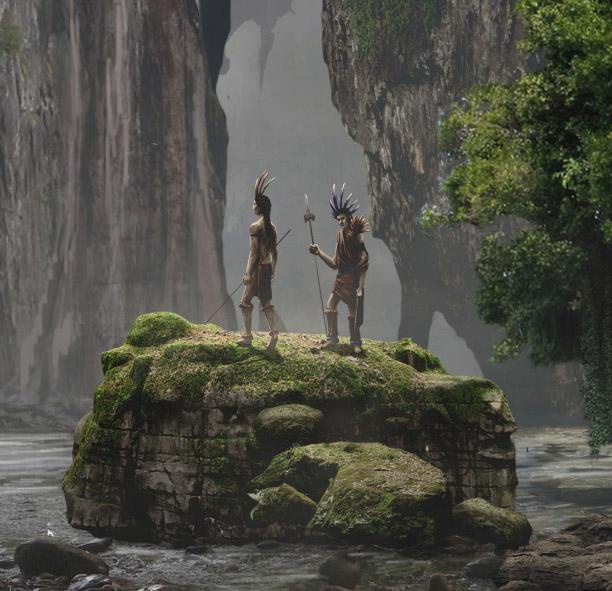 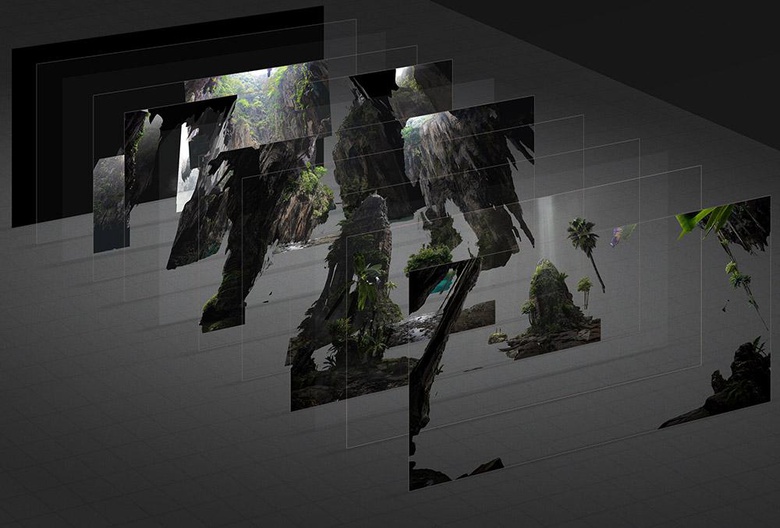 Looking at the finished picture I think I can say I achieved my goals (Fig.22). The cave looks lifelike and monumental. 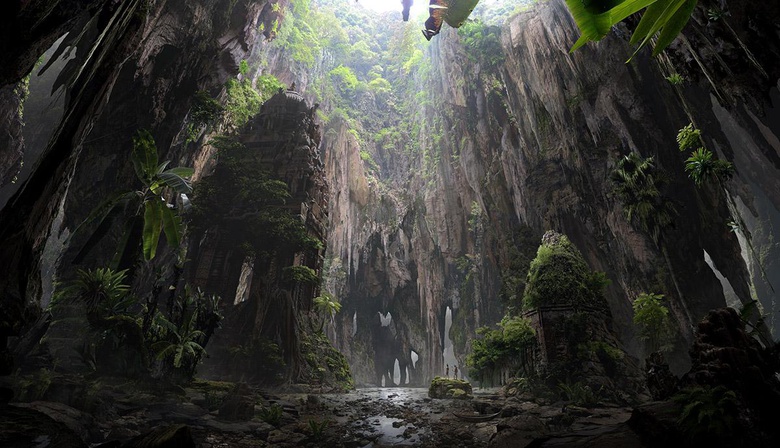