The idea behind this car came mainly from a love of sci-fi and vehicle design. The engineering of F1 cars and aircrafts is also something that always blows me away, so I wanted to try and develop something that would blend the two areas together somehow.

The design started as a really low-poly blockout that I made in my lunch break at work (using 3ds Max). I was literally just messing around with primitive shapes and modifiers such as bend, taper and twist.

The great thing with these modifiers and others is that they are non-destructive and constantly adjustable. With a little care and attention, nice simple and clean forms can be made and then copied and adjusted even further. Throw lots of shapes into loose combinations and its possible to get some nice 3D thumbnails.

A good way to play with this is to make a simple shape such as a cylinder and play with the modifiers in the stack, changing their hierarchy and adjusting the original primitive specs such as size and segments on the go.

Once I started playing with the shapes and volumes, I came up with a file full of subtle variations (Fig.01). My focus at this point was to keep the spherical wheels as dominant as possible. 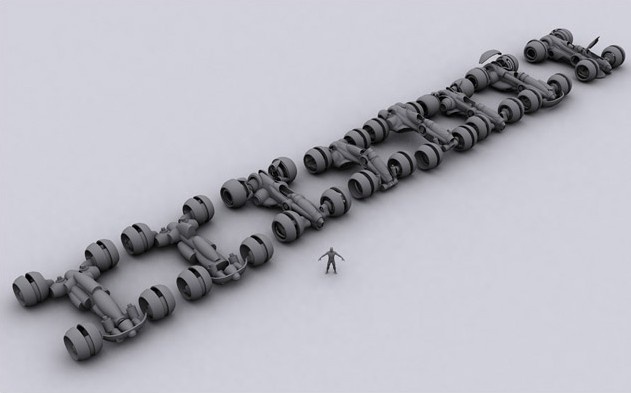 Fig.02 shows a close up version of one of the variations just to show the scrappiness and simplicity of the mesh. From this, I could take the simple mesh and do paintovers to try and play with the design a little bit. This sometimes produces nauseating results (Fig.03) - not my proudest moment, but a development nonetheless!Â 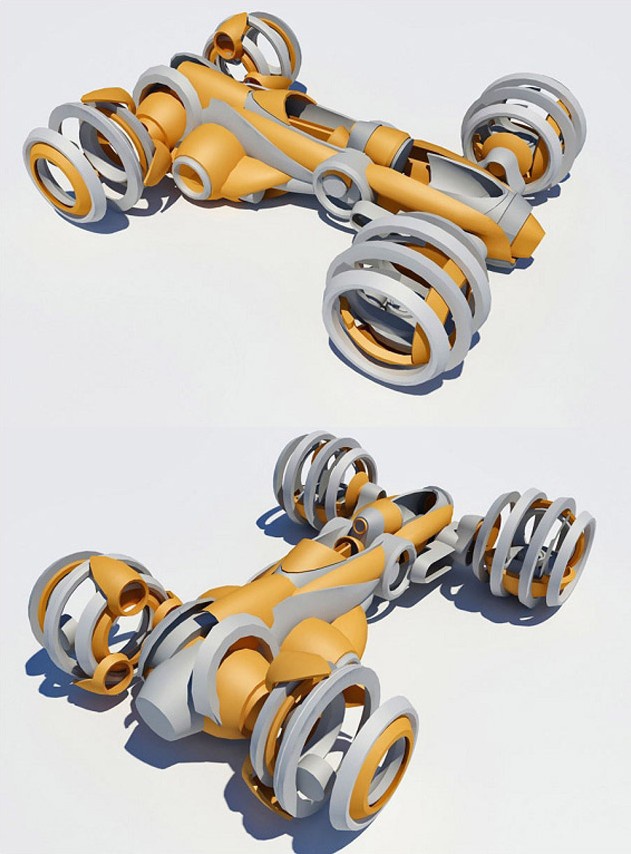 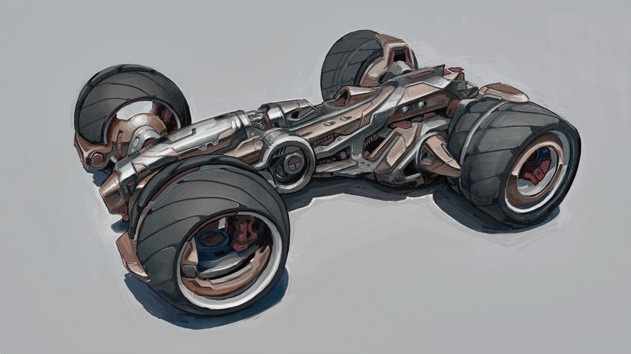 Fig.04 was an attempt to develop the shape while experimenting with some materials. I threw the car into a scene with a brushed metal template from arch and design materials and the daylight system. To get the tyre tread on the wheels I simply took the wireframe out of the viewport and used it as a guide to get accurate diagonals across the surface in Photoshop. 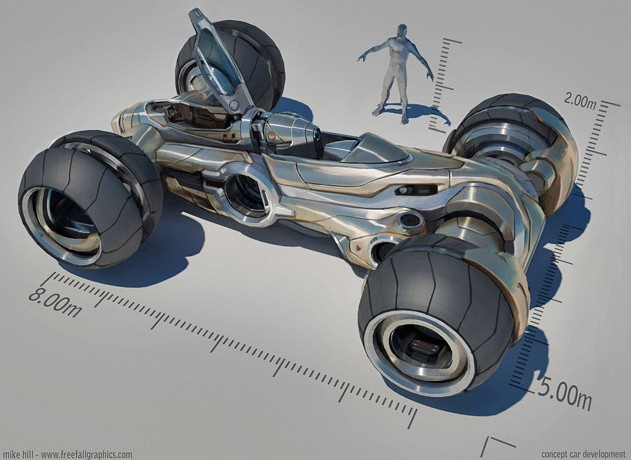 With vehicles and anything mechanical I find this is a good method in order to maintain strong proportions. Also, the lighting calculations give a strong base to work from that I could never do in 2D.

The design was looking a bit like a hot dog so I tried to pull a more defined silhouette out of the shapeless blockout and bring in some features to give it more character. I wanted to retain the core cylinder as it seemed like a strong centre for the suspension system and the visual design (Fig.05). 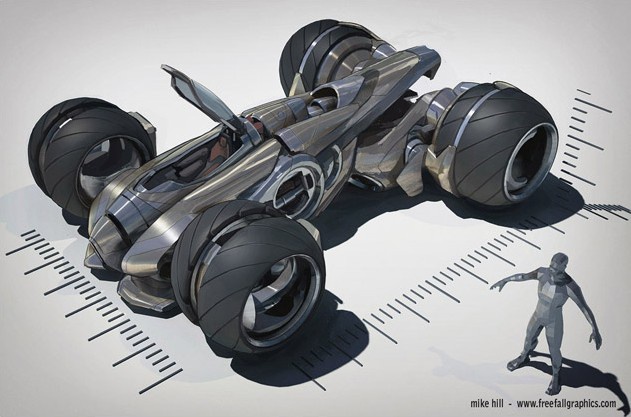 The cockpit is placed in a cylindrical tube as it is designed to rotate. The front wheels were constructed in the 3D blockout to have enough space in their build to rotate as well, allowing for the car to lean into corners to give it a distinctive look. The mesh was designed to avoid any intersection when rotations were taking place (Fig.06). 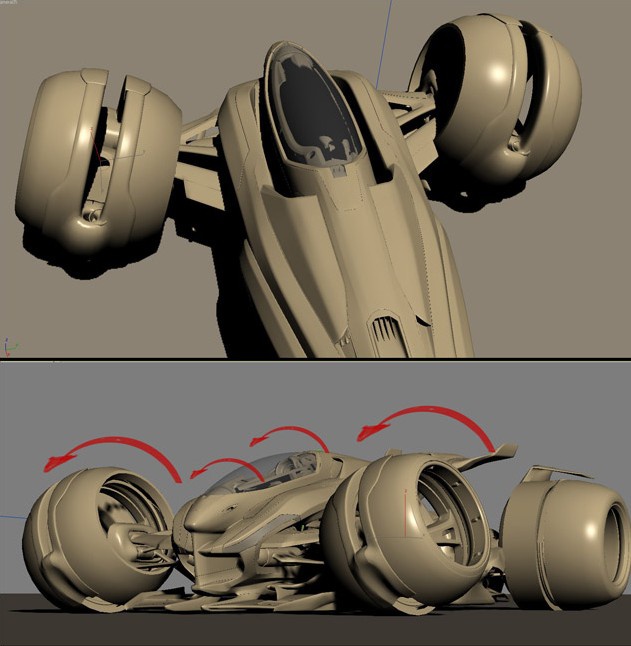 The wheel units themselves have a small turbine in the rear of the central divide. The power to this turbine is fed by the motion of the wheels that it sits between. While moving forward the turbine provides down-force, but when braking, the entire unit rotates 90 degrees to face forward, which reorients the turbine and allows for the air-brake to open (Fig.07). 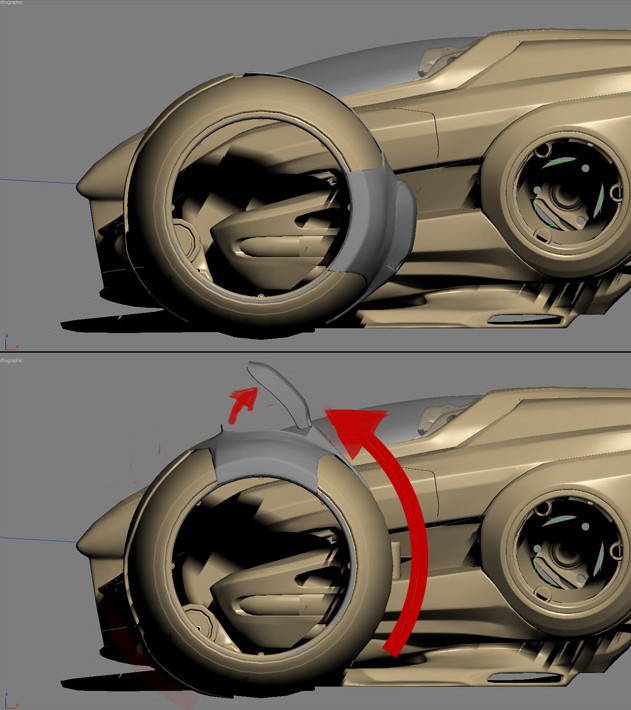 I decided to try and set the design into some kind of simple environment to get a feel for how it may look (Fig.08). This gave me a chance to check out materials and the overall shape. I was happy with the results, but felt the design really needed to have some elements added to it to make it look more credible. 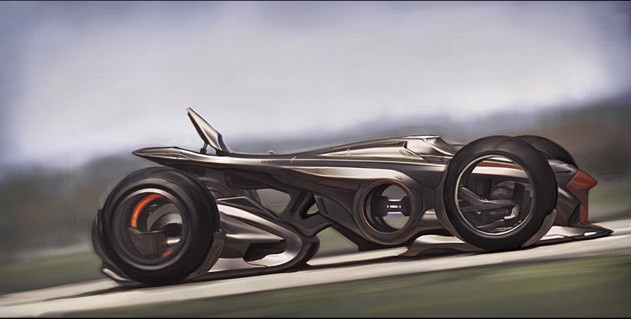 I came across some amazing JSF development hangar pictures while browsing the net, which can be seen in Fig.09. I wanted to try and replicate the feel of these pictures and so set about blocking in a basic scene. 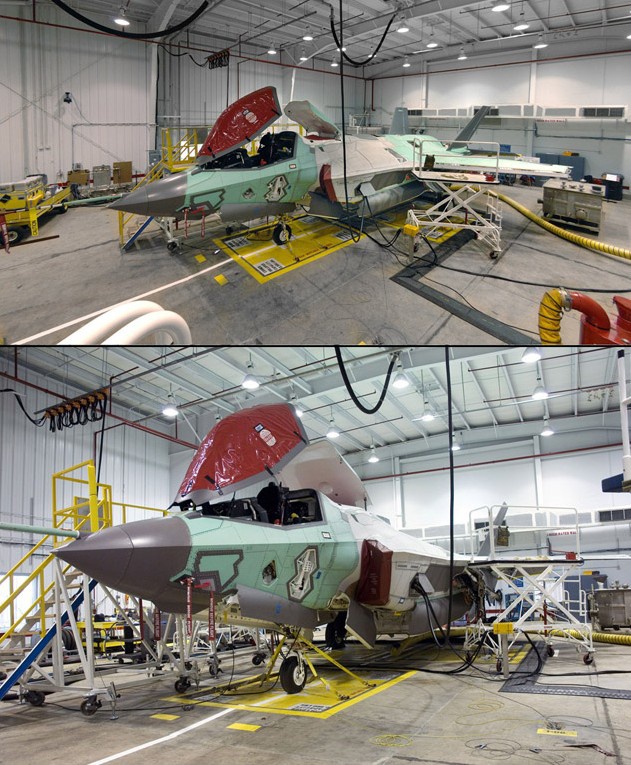 To save time and get high quality render plates for compositing, I sent the scene without lights to my friend, Alex Jupp, who had recently been working with V-Ray. He quickly knocked out some renders based on the position of the light housings above the car. The purpose of these plates was not to make pretty final renders, but to get an assortment of qualities that would be convenient to work with in Photoshop for the purpose of compositing.

These renders were as follows: 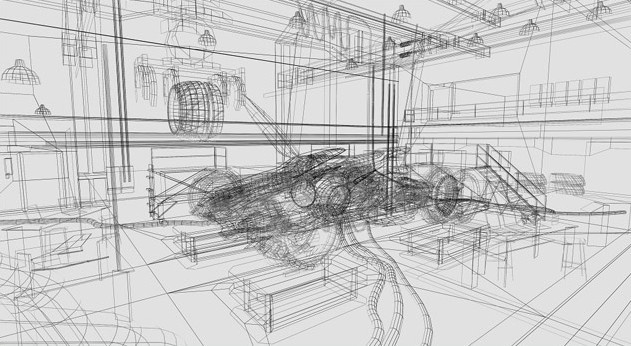 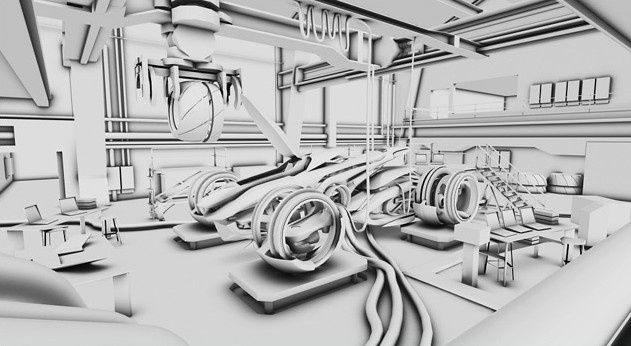 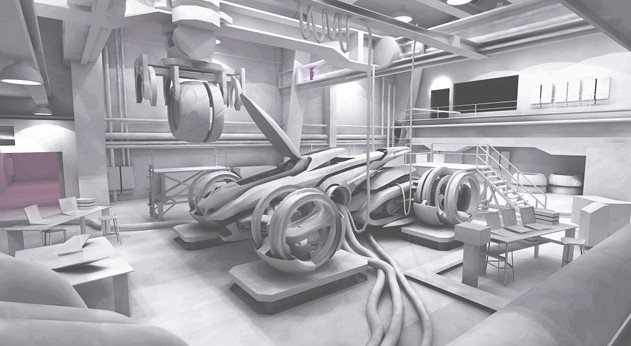 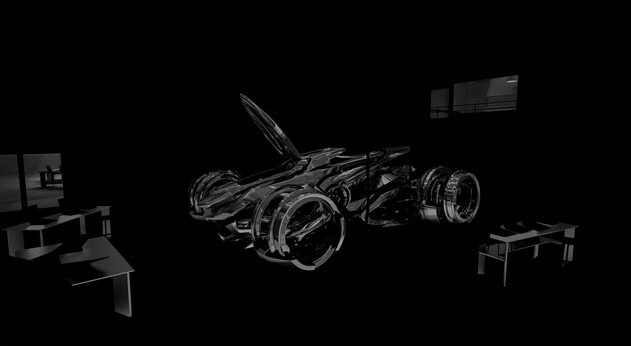 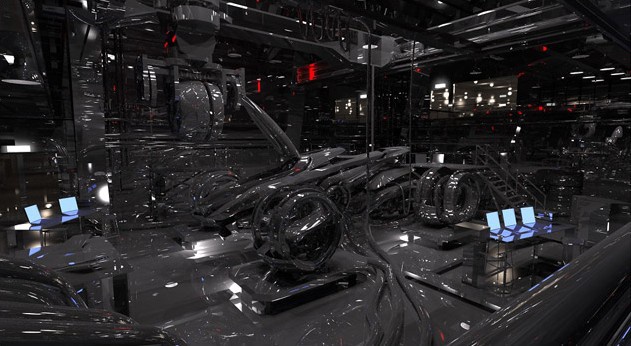 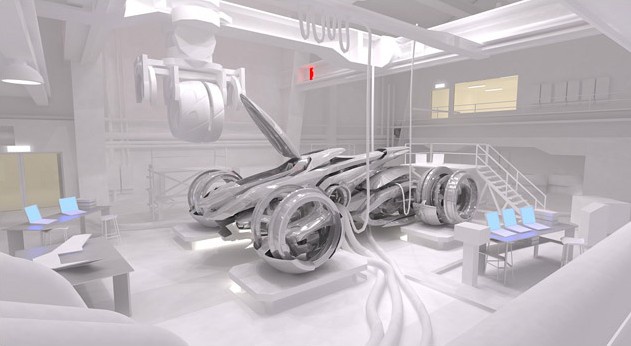 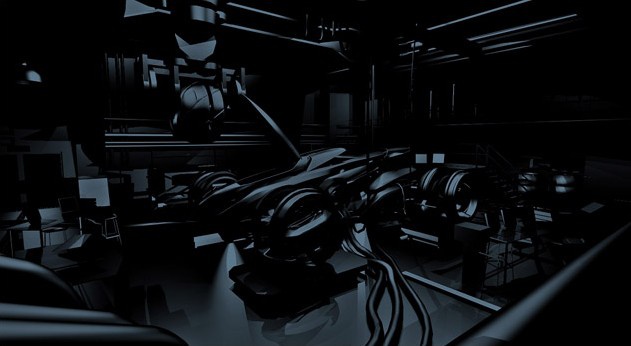 Fig.17 shows the first stages of blocking in colour to the scene and turning off all of the 3D renders. Ugly? Yes, very! Fig.18 shows the same scene with some of the composites turned on. The main thing was to keep the lighting layers on as overlays or colour dodge layers and adjust their values accordingly. The AO pass works best on top as a multiply layer. Experimenting with the composites is the key thing. 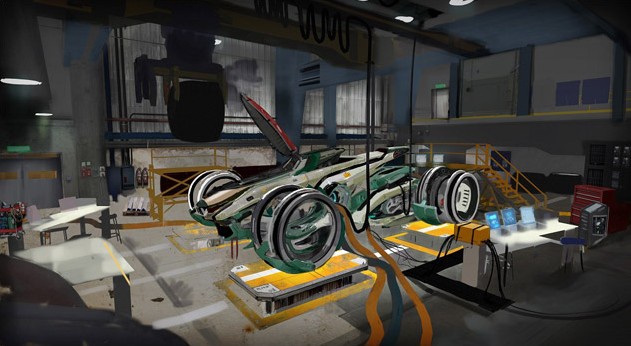 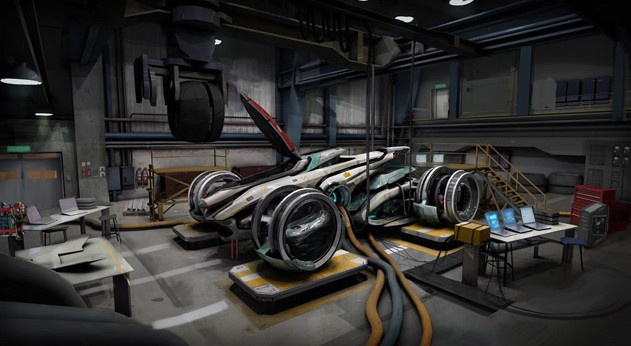 Sometimes even images that seem too messed up can give a little chaos if used subtly to break up the flat nature of certain areas.

As the compositing process went on, the original plates tended to start getting in the way of development. I collapsed as much as possible as soon as possible to avoid becoming overly precious about the original 3D. I wanted to add some new design elements, so I couldn't rely on the base renders too much.

At this point, I wanted some input from a pro. I sent the WIP file over to my CG mentor; Jeremy Cook www.2d2cg.com.Â  Years of experience with Blur and ILM pretty much guarantees you can't go far wrong with his advice! He was not short of great theory to provide me with. He raised some really valid points about how trying to capture the feel of a snapshot in a well lit scene like the JSF pics could be a problem for the image in terms of readability and impact.

He nailed a quick paintover in an evening and sent it back (Fig.19). I loved the dark moodiness of the piece and decided to pull out more contrast and darkness from the original idea of a completely lit scene. With these new suggestions in mind I began adjusting colours and lighting to try and pull the viewers eye directly to the car (Fig.20). 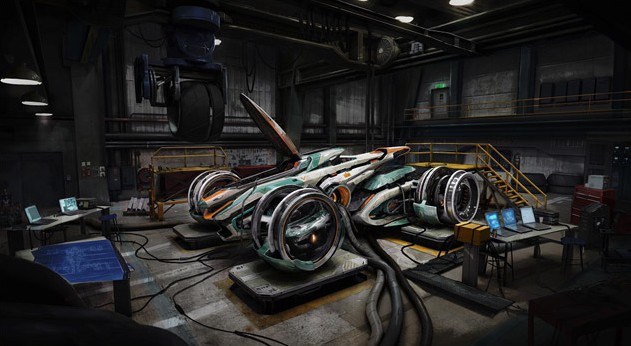 For final tweaking and textures, I got some advice from my colleague at Karakter, Henrik Bolle, and introduced some final atmospherics (Fig.21). 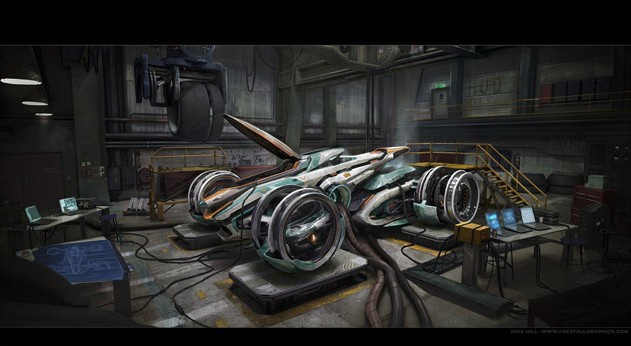 Having finished the image I continued to mess around with the 3D file, with no strict direction. Fig.22 - 25 show some test renders done with some area lights in mental ray and some cockpit ideas. 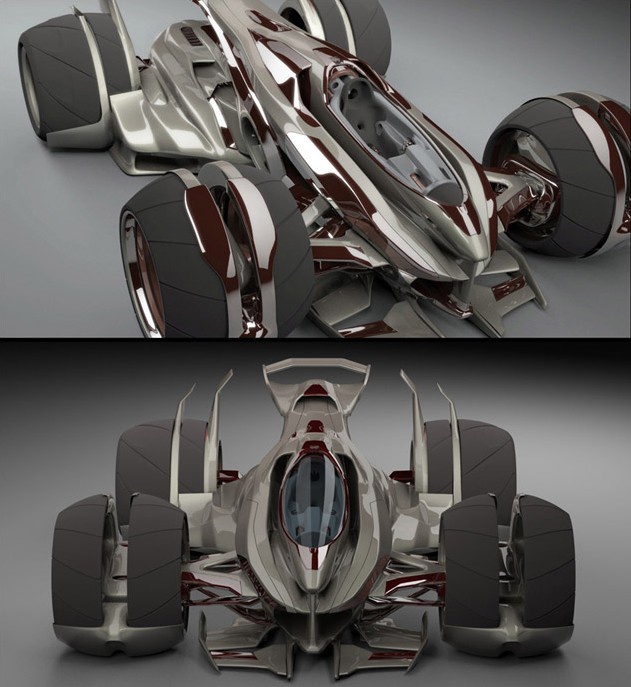 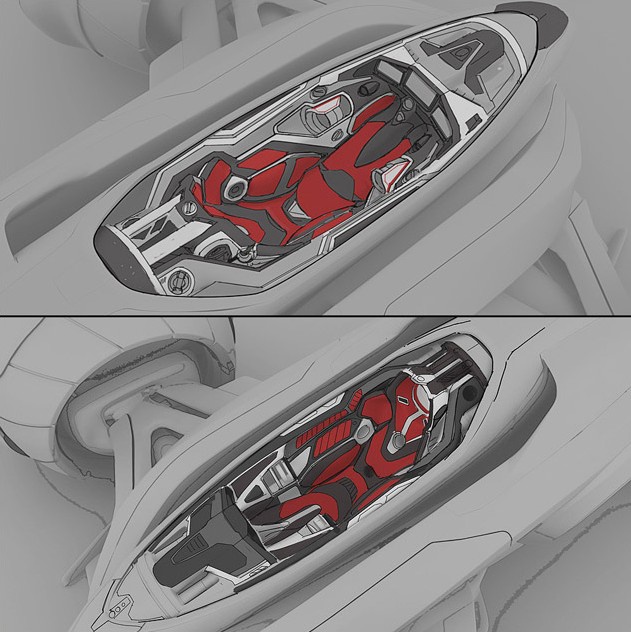 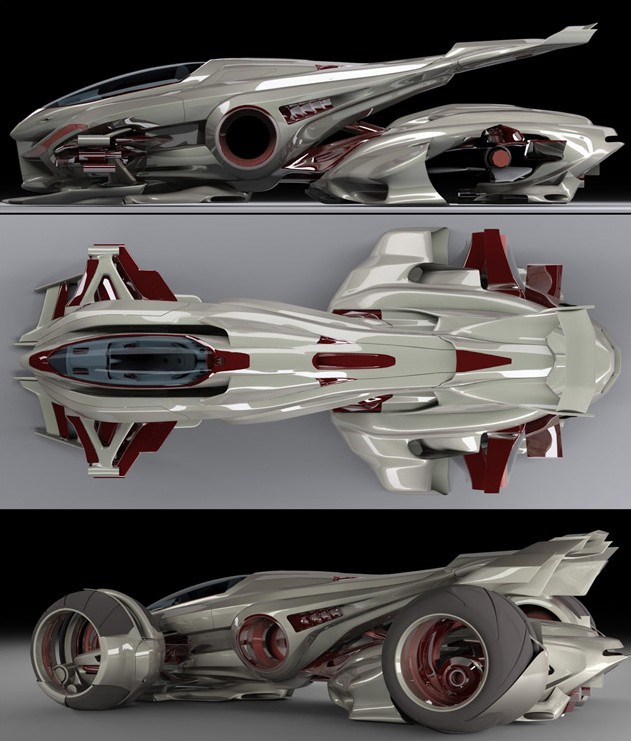 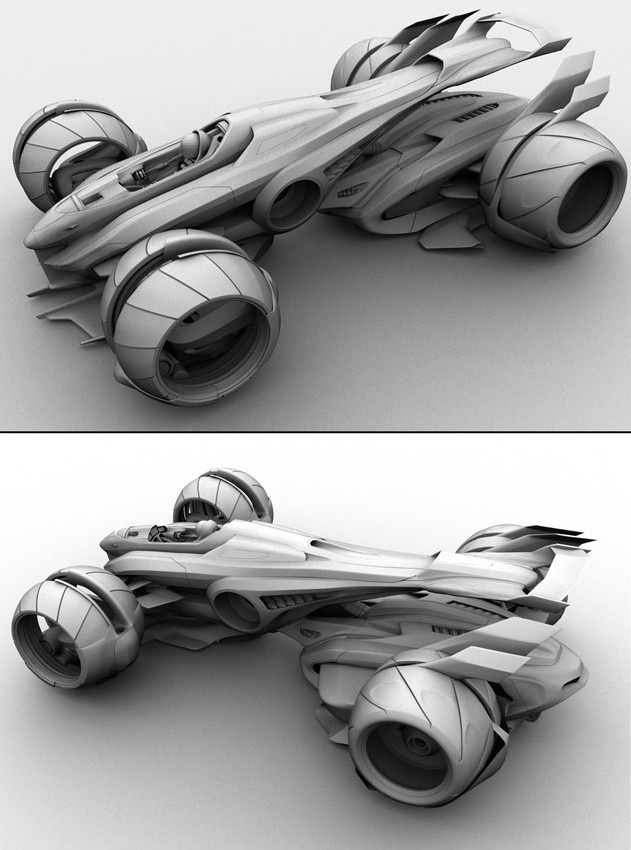 While making a test render I came across what I thought was quite a nice angle, and in a bid to try and make a scene that wasn't too reliant on 3D composites I took the small render (Fig.26) and blew it up. I decided a subterranean racetrack on an epic scale would be quite interesting and with some blimp hangar images I set about compositing in fresh colours and a background.

Fig.27 was the first stab at throwing in a few photo elements found from various resources. A blimp hangar, a cargo hold etc.

Fig.28 shows some balancing of the image. I killed off the contrast in the background to try and strengthen the composition a little bit.

I was still focusing on the design of the car at this point and so threw some photo elements into areas where there might be some tech, such as the wheels. This bought it to life a little and sold the functionality (Fig.29).

Fig.30 shows the final balancing and tweaking with a bit of clean up. The design still has a long way to go, but I intend to develop it more when I get some free time from work and I can model the details for real.

I hope this is useful in some way! My workflow is far from perfect and I definitely didn't strike the right balance of 2D/3D in order to be as efficient as possible. I hope to mend these workflow issues in future projects. Any critique to aid improvement is always welcomed.

I am now working with Karakter: Concepts and designs for virtual worlds, based in Amsterdam. Our website is currently being developed but please check it out for a PDF of our portfolio: www.karakterconcept.com

My personal website, which is in dire need of an update, is here: www.freefallgraphics.com

To see more by Mike Hill, check out Photoshop for 3D Artists