The original idea was born 3 years ago when I saw an old photograph of drunken women (Fig.01). 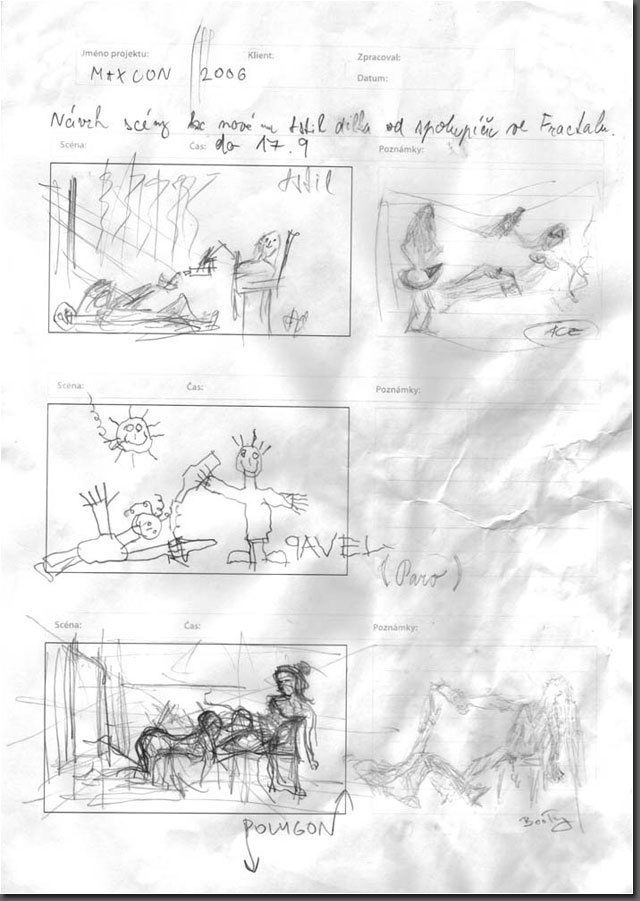 After having the initial idea I realised a few weeks later that it could become a good image. It happens to me sometimes that I'll see something and have an idea, and I tell myself that it will work, but after some time I'll discover that it won't and stop. I don't find it a good idea to start on a new project headlong; I have done this in the past and now find it better to wait a few weeks to consider my opinion of a project before starting. If I am still excited about the idea after a few weeks, then I'll start work on the concept and working out the composition.

The concept came first and is a very important step for the creation of a good image. For me, it is important to add something to a theme in order to add variety to a certain idea. The goal of this image was to involve the beholder of the image in the storyline itself, to get them to speculate, take note of the detail, the story and the atmosphere enacted in the scene. I can say that this was one of the heaviest things of this image creation.

I was helped with the creation of this image by MaxCon 2006. Â I sat with other graphic designers in the pub till late one night, we discussed quite a lot and I told them about my idea to create some drunken women with an erotic or lesbian tinge. After that, everyone made some sketches. On this sketch (Fig.02) there are various names so that don't take it too earnestly, but I found that it helped me with my motivation and I appointed myself a deadline which I promised myself I would keep. You know how it can be a problem sometimes keeping deadlines of personal projects; the more complicated the work, the bigger this problem becomes! 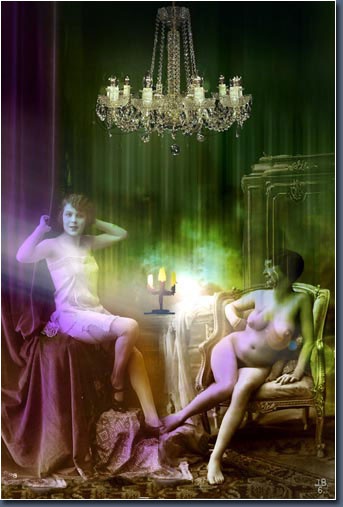 I defined my concept in Photoshop (Fig.03). 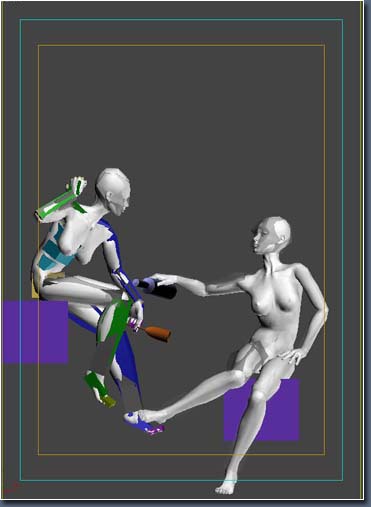 I started with a scene and then located the women into approximate positions within it, using the furniture to try to find a suitable composition. I decided in the end to change the lighting in the final image from what is shown here, because I found the lighting situation in this original concept a disturbing element for the viewer. With the concept sorted,
I continued by following the concept and modelling the characters in 3d, in their respective positions (Fig.04). 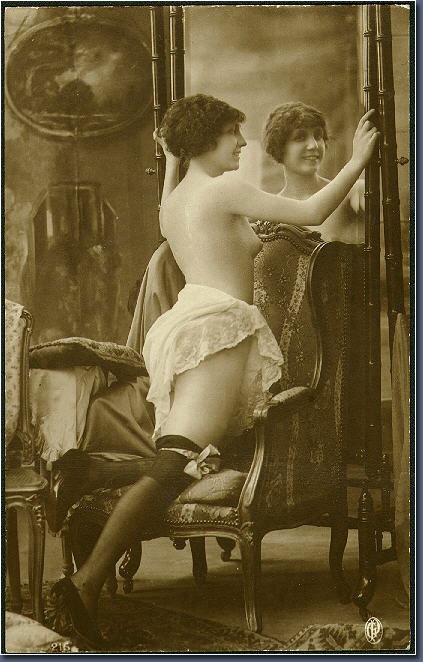 It's good to find a few photos and references for everything in your image (Fig.05 - 07). They will help you to improve some details and they are also good when it comes to the settings of your shaders and textures. 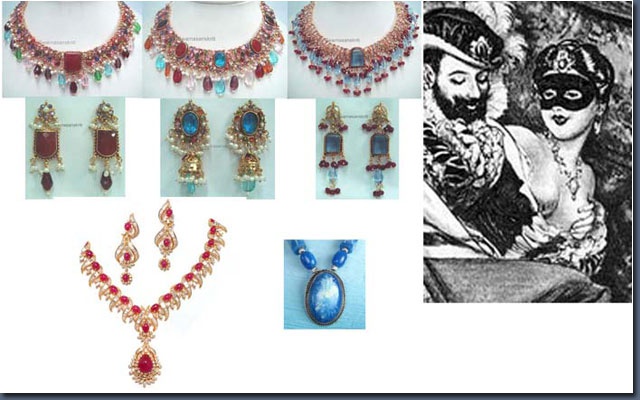 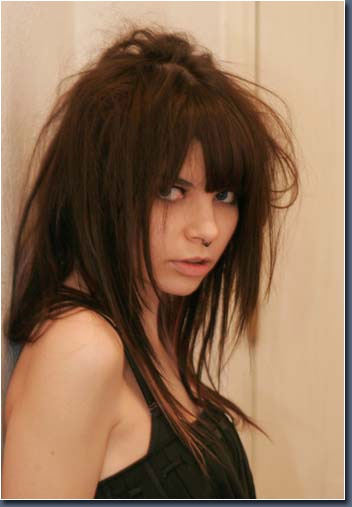 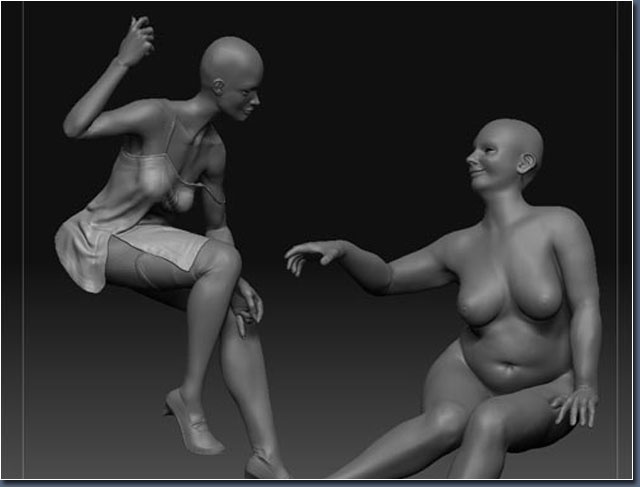 The modelling element of this image was quite a routine operation, and not all that enjoyable. To model both women I used my basic character, Monica (which you can buy if you go to the 3D Shop section on my website,
(http://www.a-stil.cz). I did my best to pose the rigged model, and I added Edit Poly and moved and rotated them in Max if I needed. I sculpted the final forms in ZBrush (Fig.08 - 10). 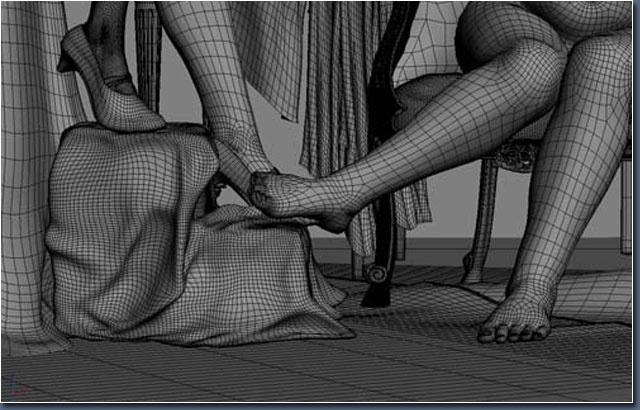 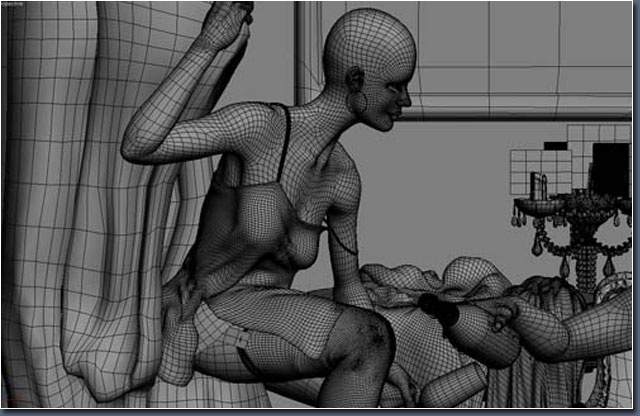 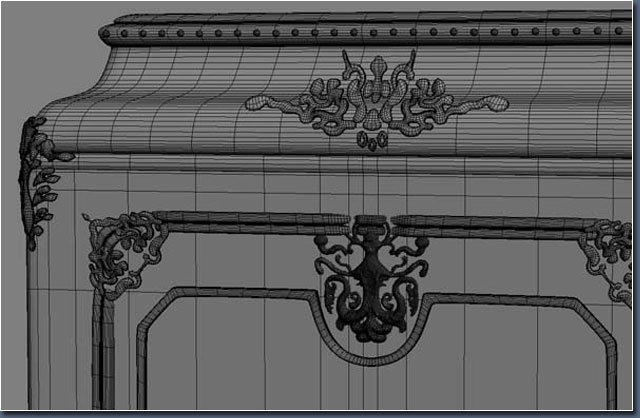 Various decorative elements of the sofa or suitcase were modelled in Max (Fig.11 - 12). If it was possible I created a plane only and did the relief in ZBrush. 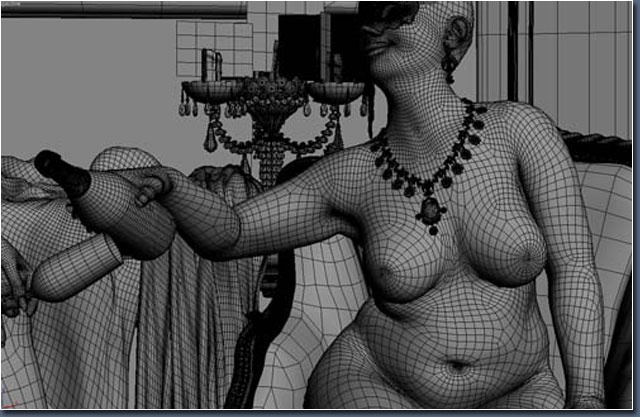 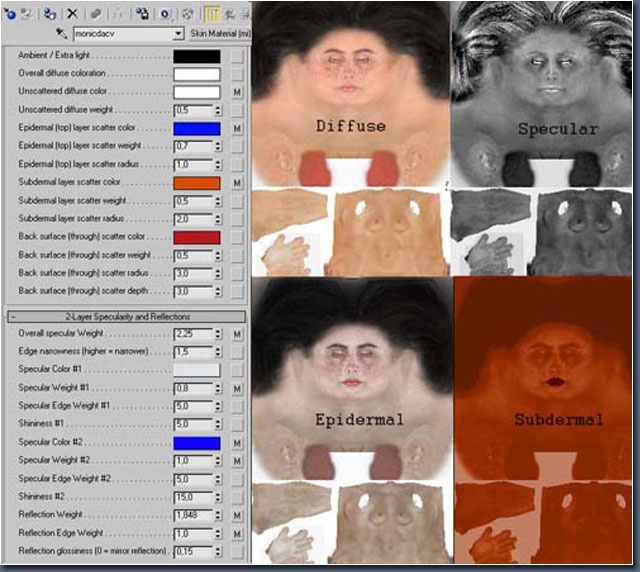 Both women have the same skin texture with only minor adjustments, because making an image such as this is very time-consuming. I knew that the light from outside that I was going to use would light up some elements of the women and leave other parts of them in the shade, behind the visible ray of light coming from the window, so I didn't beat myself up too much about using the same skin texture for both women (Fig.13).

The candle and glass stand was very difficult in terms of the shader. I am very pedantic when it comes to this kind of thing, and if something isn't exactly what I want then I will continue until it's perfect - inevitably this takes much more time. The skin shader for the women was quite standard, as you can see (Fig.14). 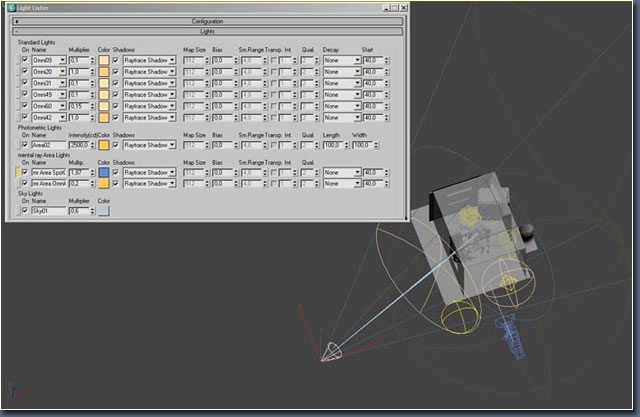 I had clear idea in mind for the lighting. The main light was to be moonlight from the window; the interior light was to be much weaker - not so illuminating - to imply an intimate atmosphere. You can see that the colour of the lights were mainly warm (Fig.15). 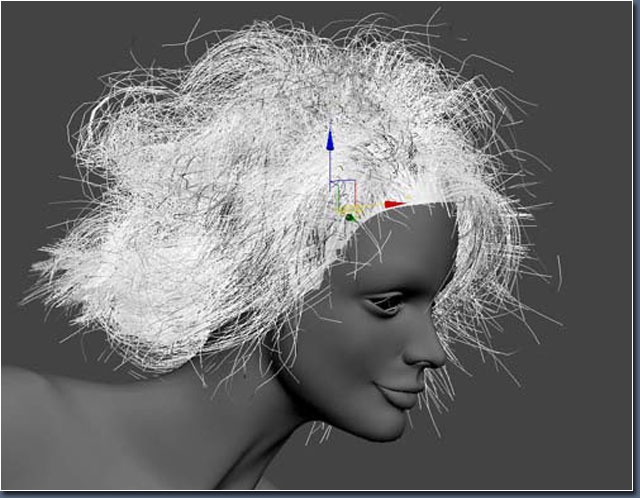 I left the hair until the end. I didn't want start to it but it actually went pretty quickly. The resulting hairstyles were done in around 10 hours (Fig.16 - 17). 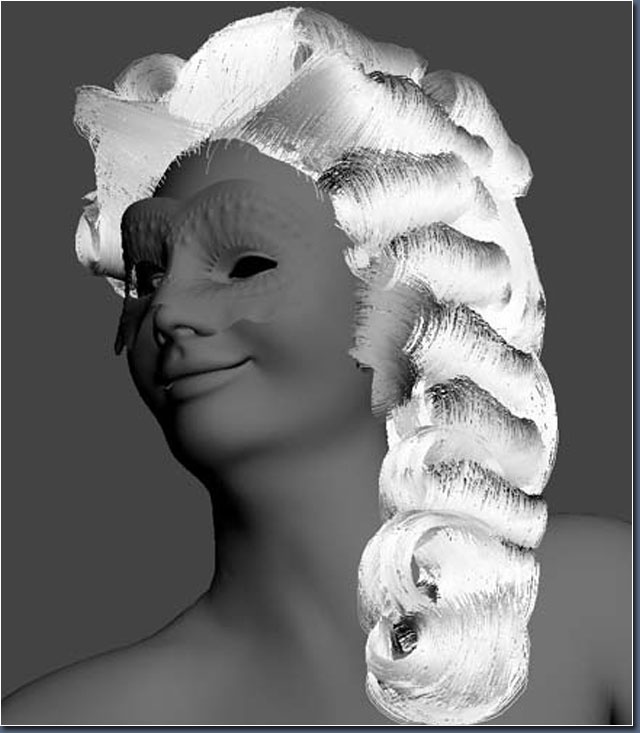 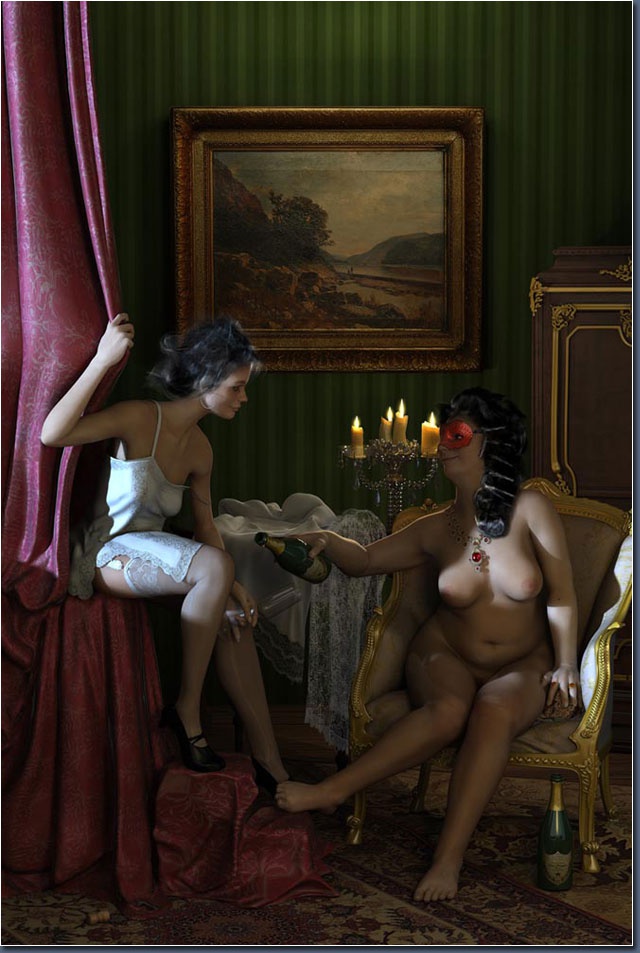 I coloured them in Photoshop in order to get the desired effect and areas of light and dark. I etched into them in some places a little, too.

I made tightly curled hair - as if in rollers - for the larger lady; these "tubes" of hair were simply copied and scaled and rotated accordingly. There were around 20 in the end. Some twists of tresses were also copied according my needs, too. And it was complete!

I decided to go for dishevelled hair for the thin woman. It was an unwanted problem at first - creating nice-looking dishevelled hair is not so easy and it wasn't until my tenth try plus some sketching in Photoshop that I achieved what I wanted.

The trimming of details and repainting mistakes from the final render was the main part of the post-production process, making sure that flaw wouldn't show up in the 6k version. Some brightness and contrast and colour correction was also done here (Fig.18). 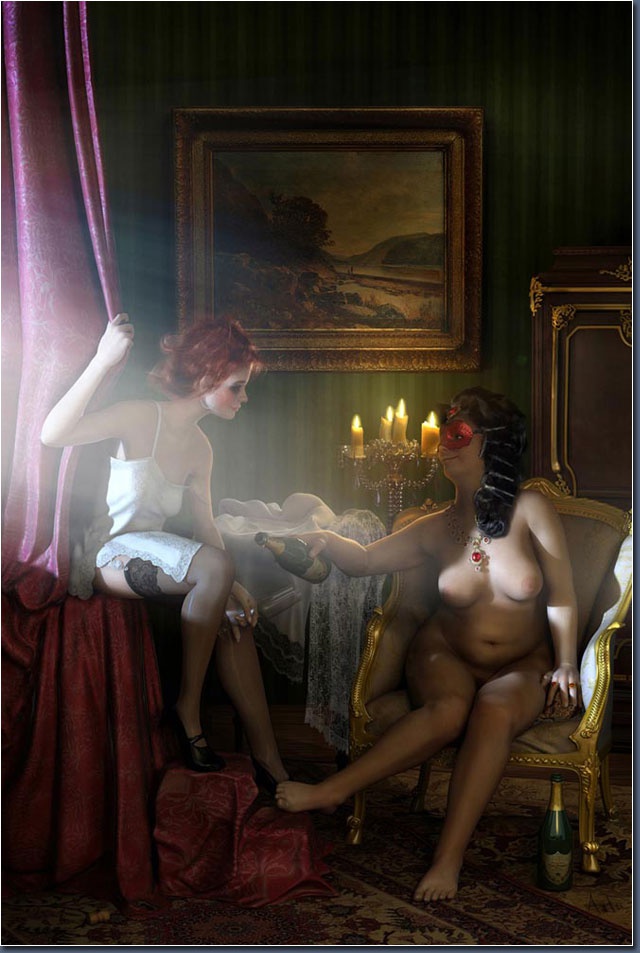 Thanks for reading; I hope you've enjoyed the making of 'Girl's Experience'.