Future Soldier was created as a promotional piece for my new startup company, Soulty Productions, at www.soulty.com. Our aim is to provide high quality 3D services for an affordable budget.

Although the model was modeled and textured for animation, I knew it would mainly be used for high resolution 2D illustrations. Because of this there were no limitations on trying to optimize the way it was made for faster render times. My main goal was to produce a futuristic sci-fi character.

The idea behind this character was to make it believable by having its armor appear functional and practical, and not just look pretty. I spent a lot of time researching and collecting references to use and concepting some ideas. I wanted it to have a bleak look by using muted colors. I added contrast by using different materials.

Initially it had a creature's face, but later I changed this to a helmet. I liked the idea of hiding the identity of the character and also the visor gave a good place for the eyes to rest. The pose was also an important aspect I wanted to play around with. As the character has no eyes or face, it had to have an interesting pose to help express some personality.

DynaMesh was used in modeling the concept sculpts (Fig.01). I use this method a lot now as it helps get the overall form sorted before getting lost in the details. This is a good time to quickly experiment with different ideas without being held back by technical limitations. A tip I find useful when using DynaMesh is to keep the mesh as low poly as possible, but still maintain the shape you are modeling. This will make large changes easier and if you need more resolution, just subdivide once you're happy with the form. 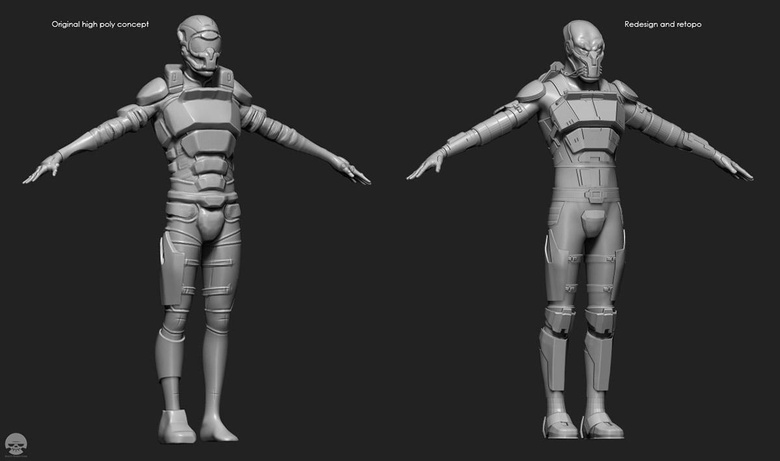 The majority of the parts were sculpted and retopologized in Topogun or 3ds Max. Fig.02 shows an early test pose without the glass visor and the mesh over the fans. 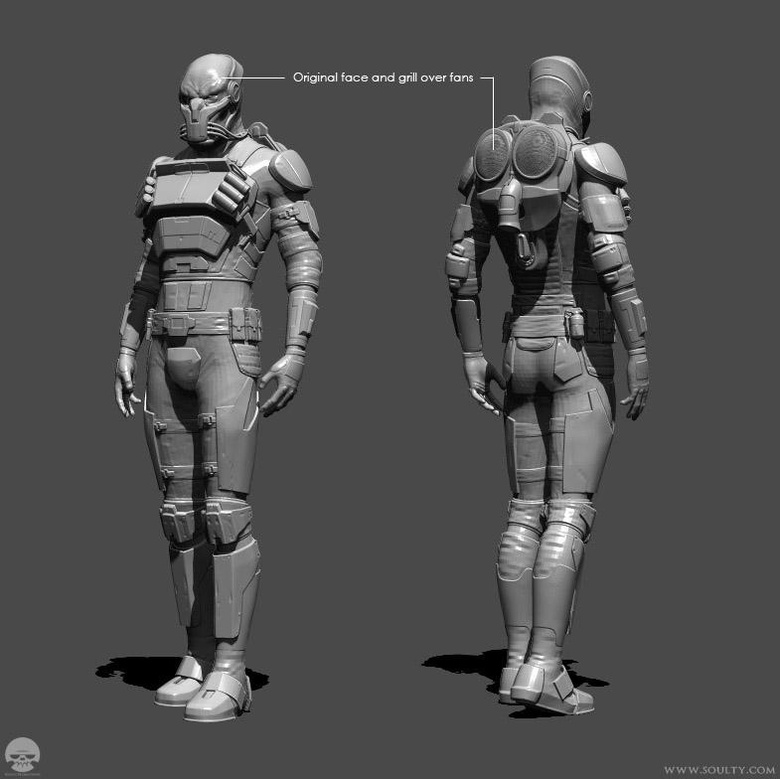 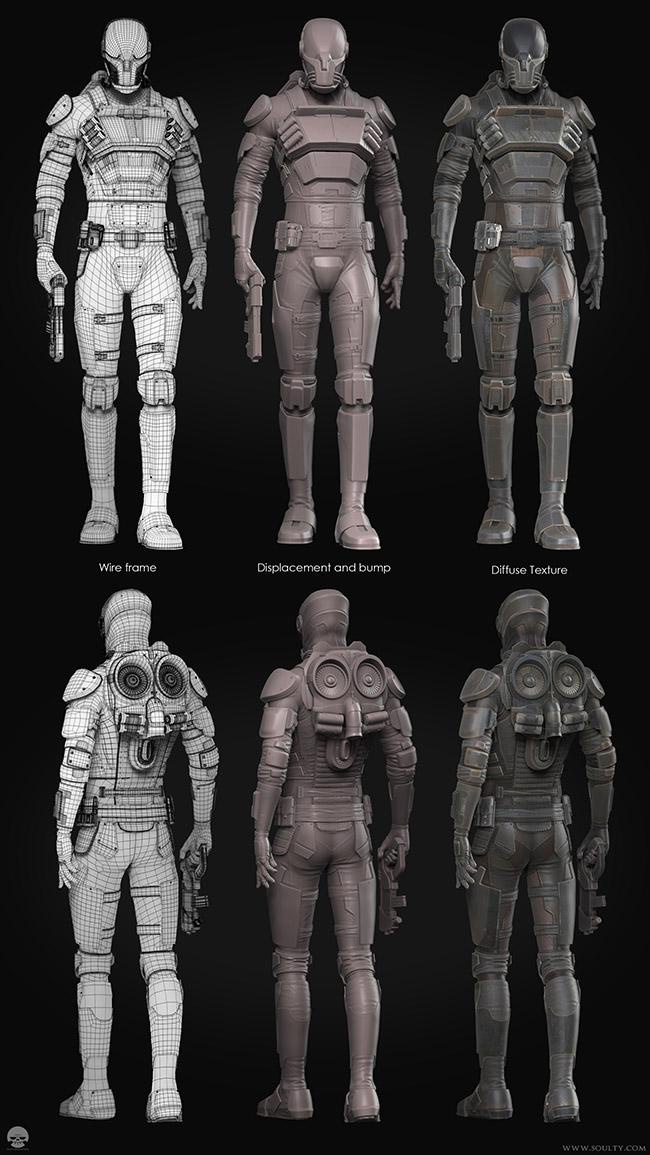 32-bit displacements were used as they hold more information and produce a higher quality finish than 16-bit and are quick to set up in 3ds Max (Fig.04).

Edges and scratches were generated from 3ds Max and painted in Photoshop. The small decals (that were hand-drawn by my partner) were placed on the character using the 3ds Max viewport canvas).

Fig.05 shows a breakdown of the texturing process to final render. I've used the gun to demonstrate as it uses only one UV cluster. Once the gun was box modeled it was broken apart and sent to ZBrush for sculpting and polypainting. I used some insert meshes in ZBrush to add the small bolts. From there, a base diffuse texture was generated and taken into Photoshop to add textures and hand-painted scratches, etc. Once the diffuse map was close to finished I used it as a starting point for the spec and gloss (masks, dirt and roughness maps were used on the character).

A breakdown of the materials I used can be seen in Fig.06. 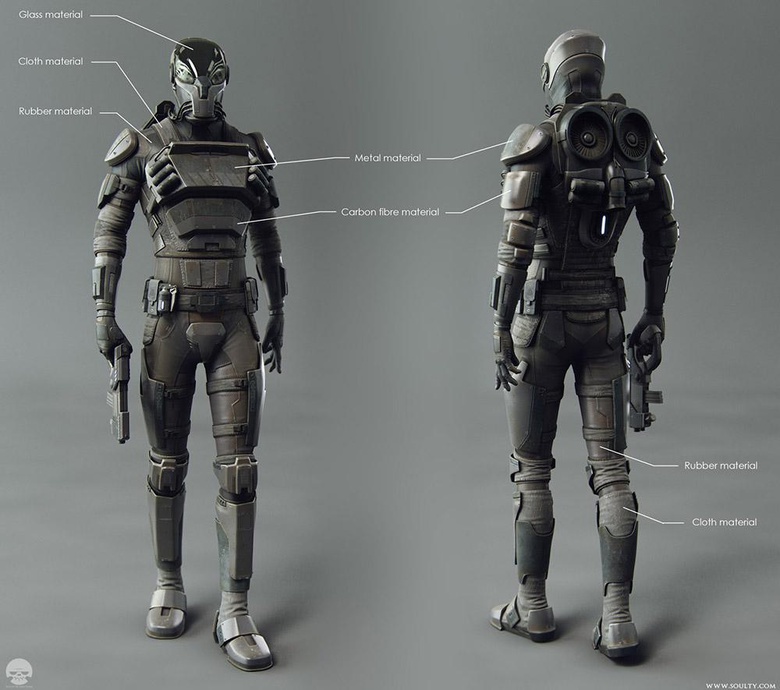 The final image was close to what was rendered from V-Ray. A 2D background, ZDepth, color grading and textures were added in post (Fig.07). 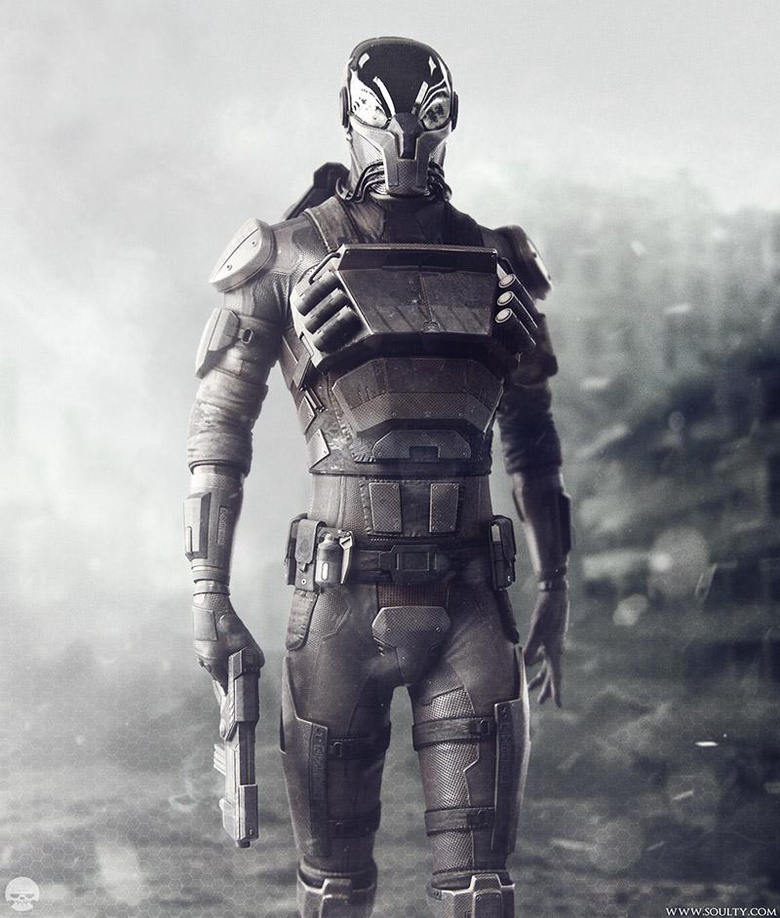 Having to design the character made the entire process take around two weeks. Having so many materials on one character was a great way to experiment with V-Rray shaders and lights. If anyone has any questions or enquiries, please feel free to contact me via my website: www.soulty.com