Making Of 'Focke-Wulf crashed in the snow'

The idea for this project was born while watching the movie The Golden Compass, which has scenes on ice and snow that are really fantastic. I added to that the fact that I like old airplanes and then started to develop the idea.

For a long time I've wanted to make a scene that involved ice and snow, but my greatest difficulty with this is the fact that I have never seen snow. After watching the movie I began to sketch a scene, and with the sketches defined, I made a simple model to use as a guide for the work (Fig.01). 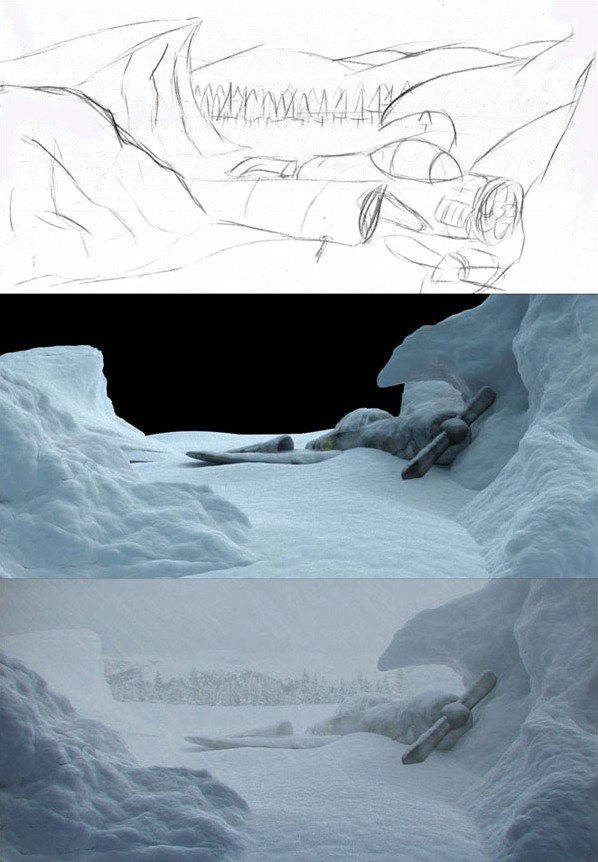 Following that I began to work on the creation and composition of materials to be used in the scene. Even though this is a stage that is performed further into the process, I decided to bring this to the beginning of the process, because the main focus of this work was actually the materials (Fig.02). 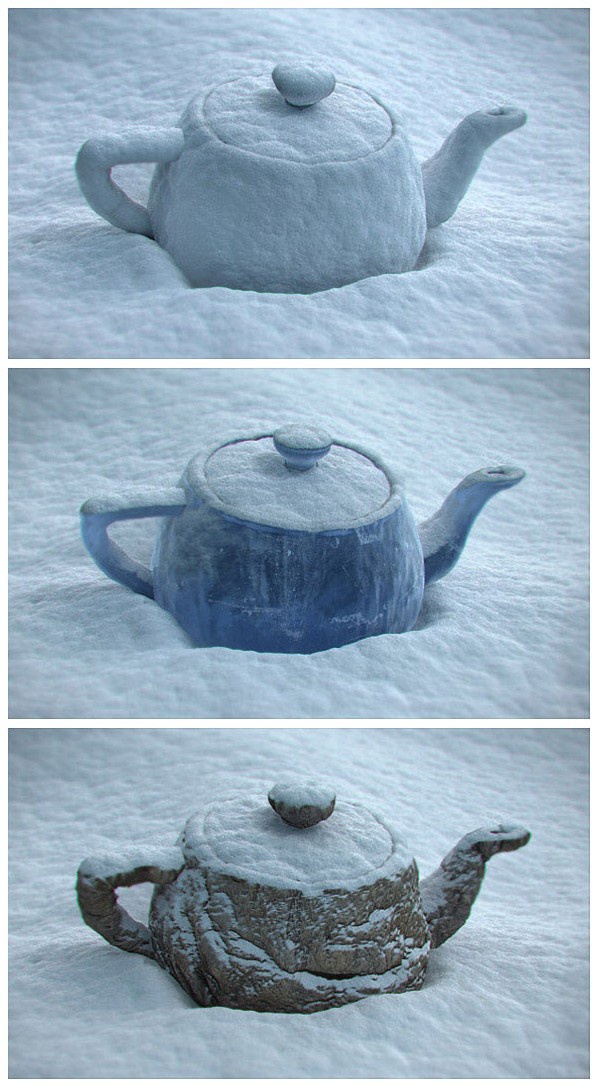 The snow material can be seen in Fig.03. 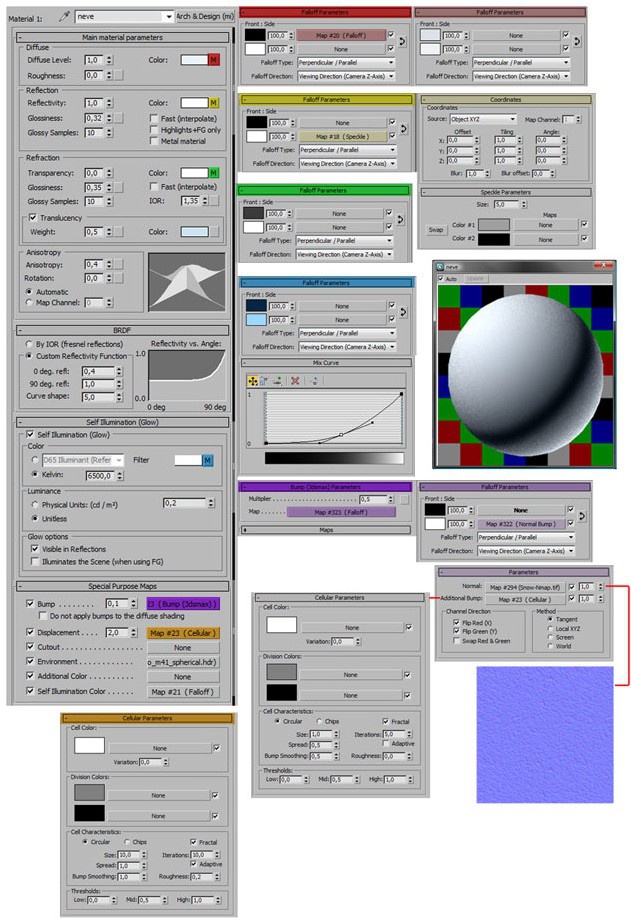 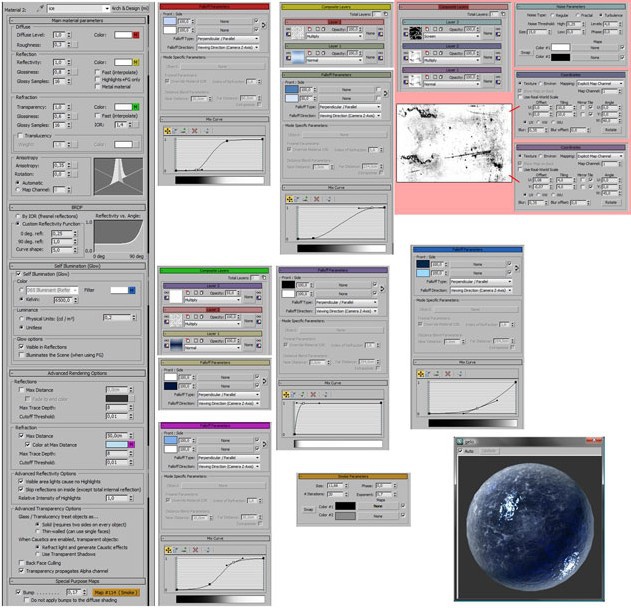 The rock material is shown in Fig.05. 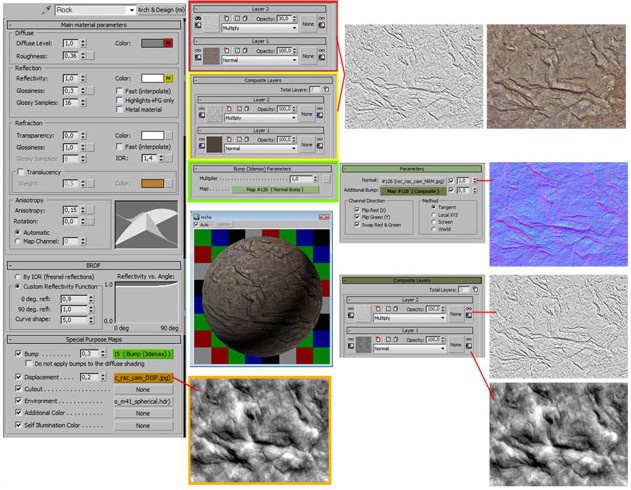 The composition of the base materials (we will call the materials that receive a layer of snow "base materials") with the snow material was made using the shader Blend and to mix the two materials the Falloff map was used as a mask, using a world Z technique.

To mix the materials the shader Top/Bottom could also be used (it substitutes the world Z technique). But to have a better displacement result I used the 3D Displacement option. This cannot be used inside the shader Arch&Design; (used to make the base and snow materials), so the shaders had to be placed inside mental ray, using the Material to Shader option to make the connection.

As I had two different materials with two different displacement maps, which needed to have the same mix as the base and snow materials, I opted for the Falloff technique in world Z instead of the Top/Bottom option. This is because in the Falloff map itself there are two channels, one for each displacement map. This Falloff map is the same map that was used as a mask in the shader Blend. 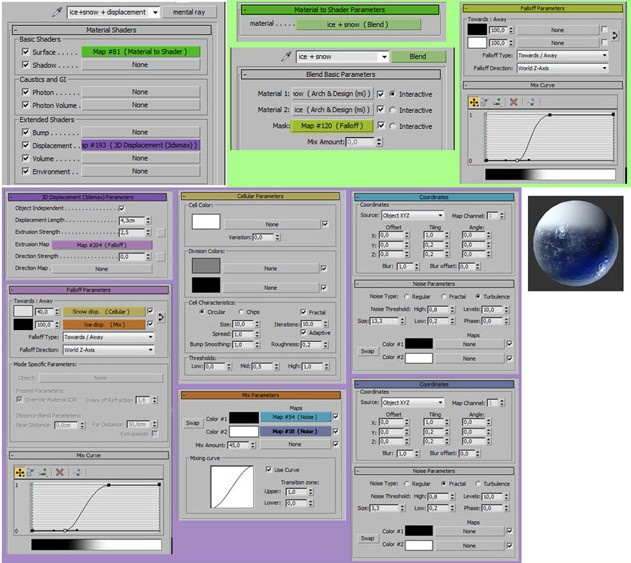 The terrain modeling was made inside 3ds Max using simple resources, such as the modifiers Noise and Displace.

After making a simple relief base, the mesh was subdivided to receive the Noise modifier.

After using the Noise modifier, which pulls and stretches the mesh, I performed the mapping of the object in order to make a new subdivision and used the Displace modifier to deform the mesh according to the texture that I was going to use.

And finally I created a new subdivision to leave the mesh uniform.

With all that, the mesh became really heavy, so now that I had the shape I desired, I used the modifier Multires to optimize the mesh. This option optimizes the mesh while still maintaining the mapping (in the case of the example in Fig.07, the mesh was reduced from 53000 vertex to 5300 vertex).

For the modeling of the airplane I utilized the Box Modeling technique, using reference images found on the internet (Fig.08). 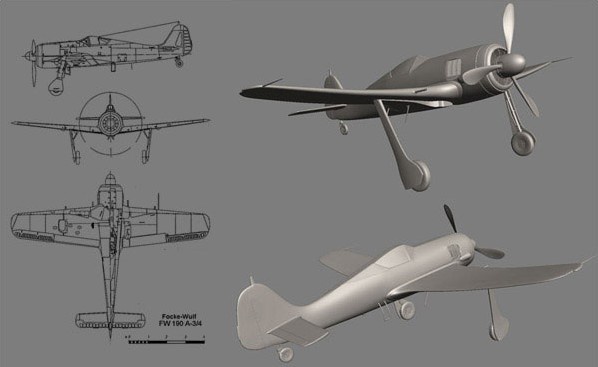 The mapping was made in 3ds Max using Unwrap, with the Pelt Map tool, to open the mesh. However, using only Pelt Map doesn't give a very good result and so to correct the mesh I used the Relax tool, which can be found in the Tools menu. The option that presents the best result is the Relax by Face Angles.

With the mesh ready, all that was left to be done was to use the Pack UVV tool, also in the Tools menu. This tool correctly distributes the mesh inside the Safe Area of the Unwrap. If there is too much space left all you have to do is use the Scale tool and make the adjustments manually, but this entire process is usually pretty quick.

To have textures with a good detail level, I separated the airplane elements into groups to perform the mapping (Fig.09 & Fig.10). 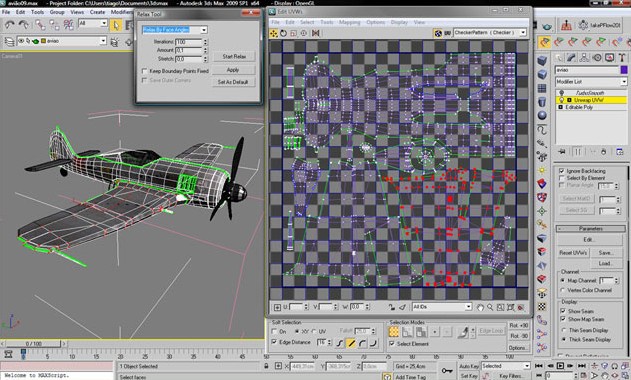 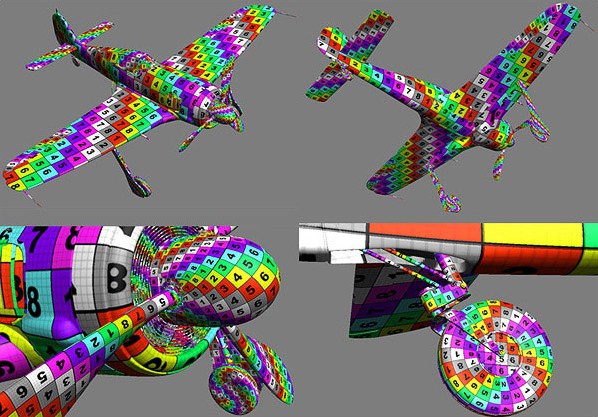 The textures were all made in Photoshop, using painting techniques and the assembling of photographic textures (Fig.11 & Fig.12). 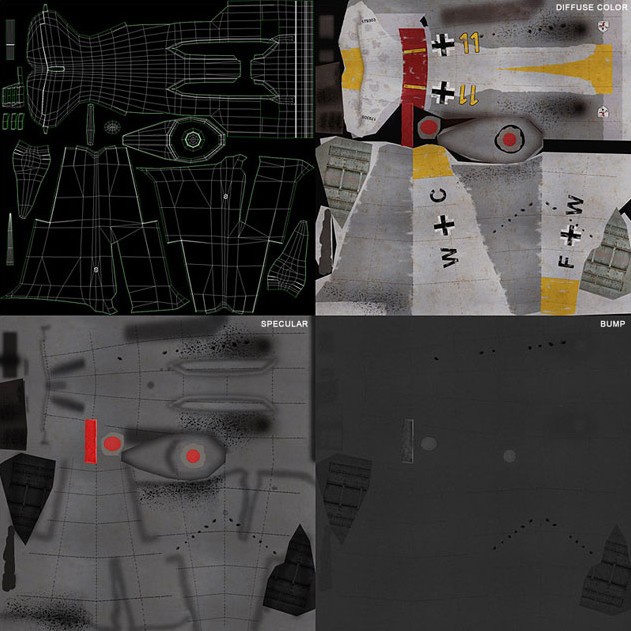 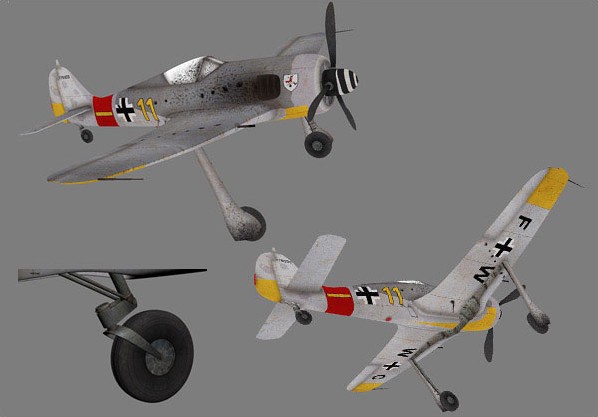 The airplane material can be seen in Fig.13. 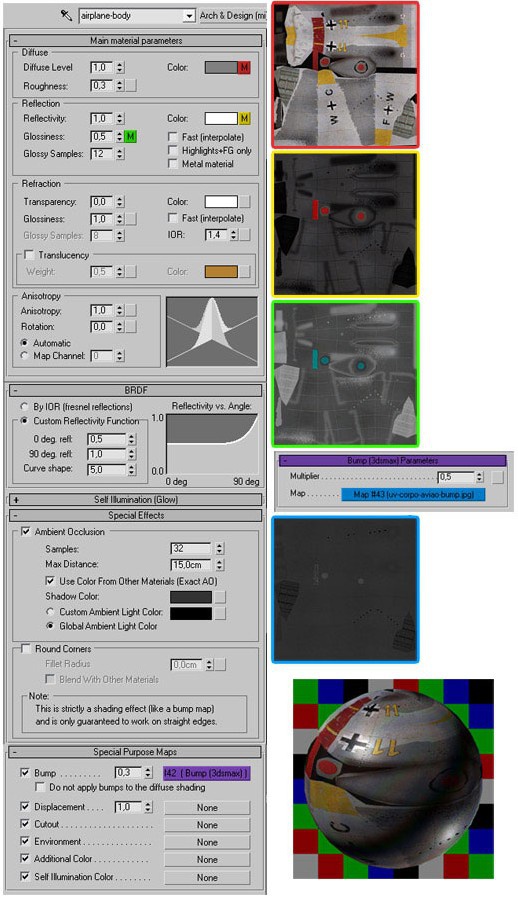 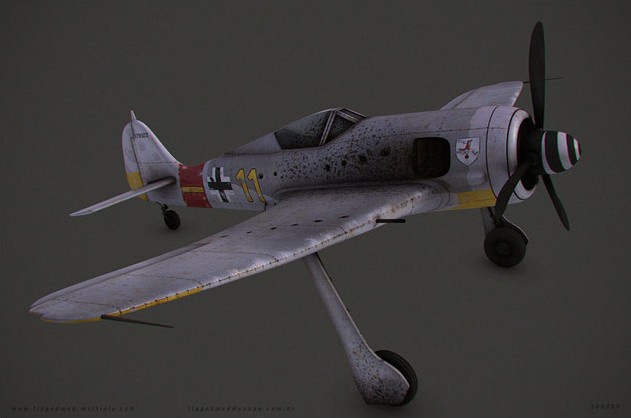 Assembly of the final scene

With the airplane and the scene ready, it was time to put the two together, and for that I had to wreck the airplane. I opted to do that manually, separating the elements, and mashing and tearing the bodywork.

To tear the bodywork I used the Cut tool of the Editable Poly to demarcate the mesh at the position of the cut.

The parts that were pulled out of the main body of the airplane, already demarcated, were selected through the polygon selection and separated with the Detach option.

I once again used the Noise tool to make the masks. To be able to use the effect only on the selected areas, I used the Poly Select modifier, with the option Soft Selection activated.

In the parts that were separated from the main body I also applied the Shell modifier to give these parts some thickness (Fig.15). 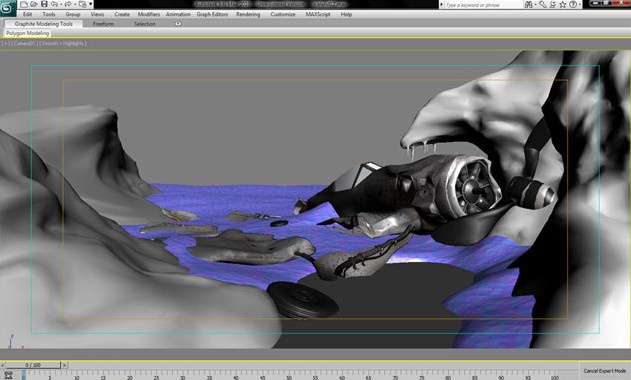 I knew that the lighting should be pale and diffuse, because the intention for the scene was to picture a blizzard during the day. To achieve this result I used a very simple alternative. A Skylight with HDRI, which was also used on the Environment as a reflection map, and a mr Area Omni with the shadows completely softened so that the scene would not be marked (Fig.16). 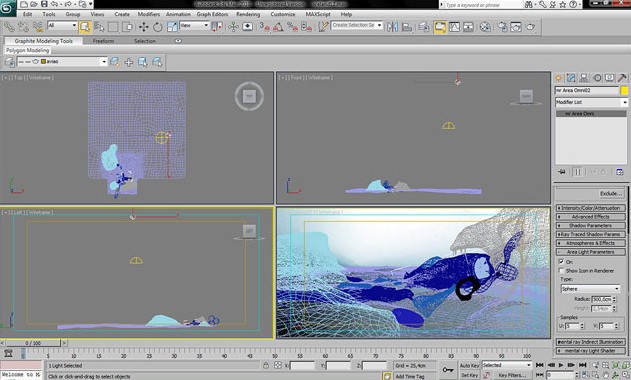 When it was all ready I just had to wait a few hours for the render to be completed, so that the post production adjustments and corrections could be performed (Fig.17).

The post production work was divided between After Effects and Photoshop. The first corrections were made in Photoshop and consisted of removing and fixing minor imperfections. For these corrections I used the tools Healing and Clone Stamp (Fig.18).

The second stage in Photoshop was to create a Matte Painting to serve as the background of the scene (Fig.19). 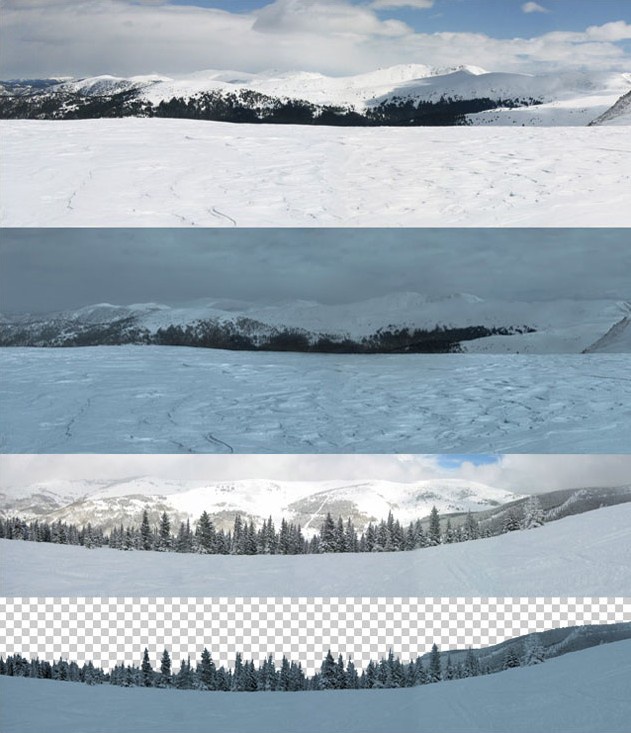 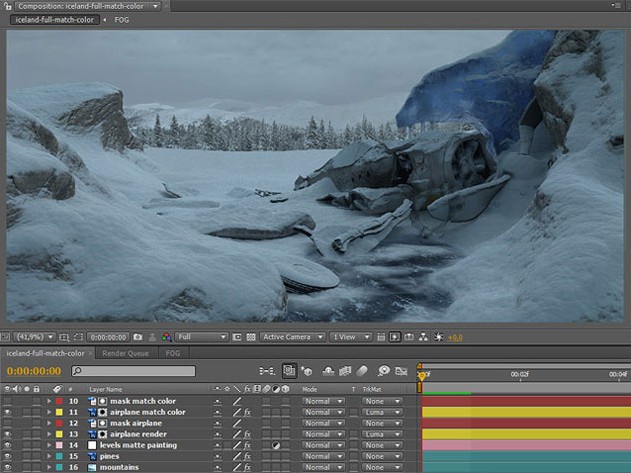 To better integrate the scene, I created a fog effect using the Fractal Noise filter and a render Z-depth pass as a mask to give depth to the effect (Fig.21). 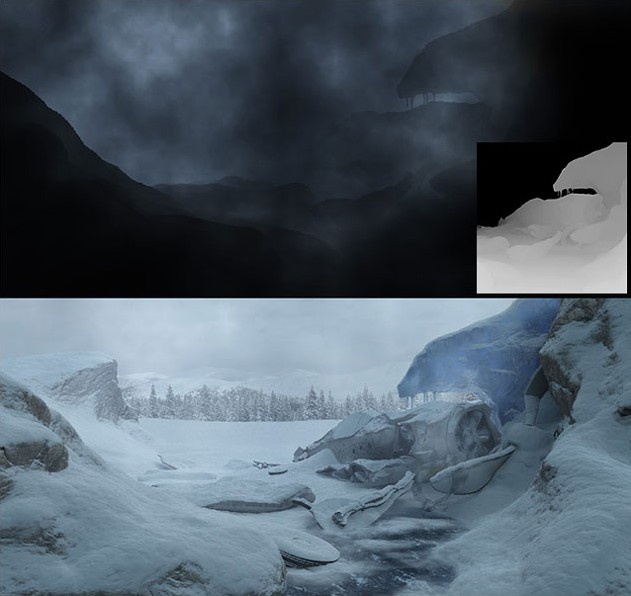 After adding the fog to the scene I used three more Adjustment Layer with the following filters: Brightness & Contrast, Levels, Shadow/Highlight and Hue/Saturation to correct and adjust the scene. Only after that did I add the layer with the snow (Fig.22). 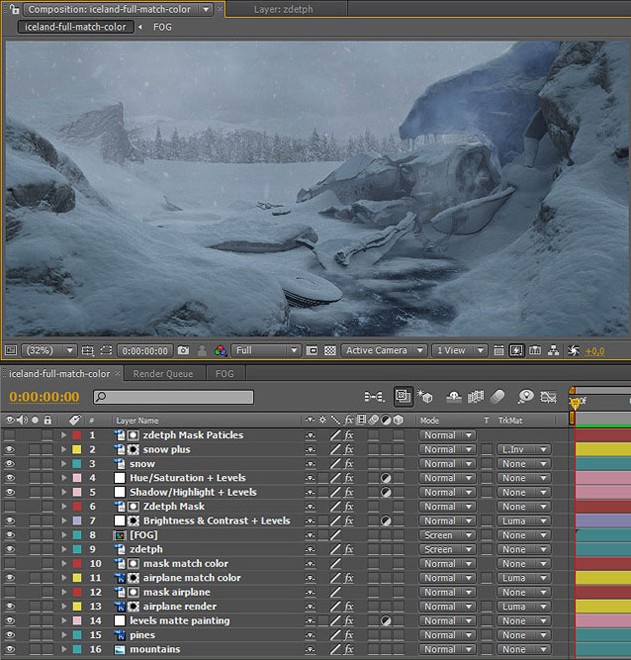 With that I finished the After Effects stage of the render and took the image back into Photoshop. I felt that I still needed to make further adjustments, such as the frosted metal parts of the airplane, composing an Ambient Occlusion render pass, adjusting the background to give the scene a little more contrast and turning to tone to a lighter blue (Fig.23). 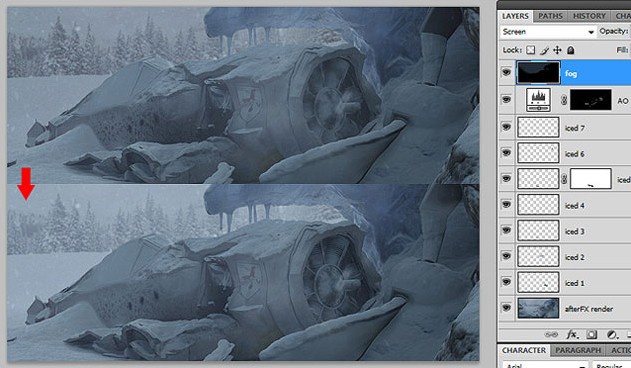 To continue to adjustment, the next stage was to select all the layers and convert them into Smart Objects to simulate the effect of a 35mm film. In order to do that I used the filter Lens Correction to create an effect of chromatic aberration, increased the sharpness of the image with the Sharpen filter and applied a grain with the Add Noise filter.

On the top I applied three more Adjustment Layer for fine adjustments and once again I converted all the layers into Smart Objects to continue to work on the 35mm film effect (Fig.24). 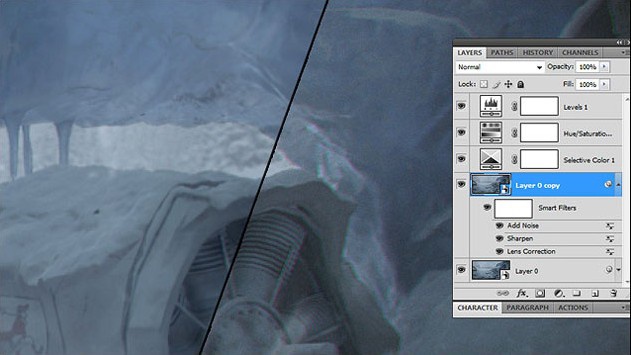 Now came the final stage, where once again I applied a series of filters intending to soften the edges of the image but also maintaining the sharpness and the correct level of grain.

A major "problem" of 3D is that it makes everything very perfect, smooth and clean. And when we work with film the scene ends up with imperfections such as softened edges, grain and some dirt due to dust and micro scratches. And as I used to say, in order to make it look good, we have to make it look "bad" (Fig.25)! 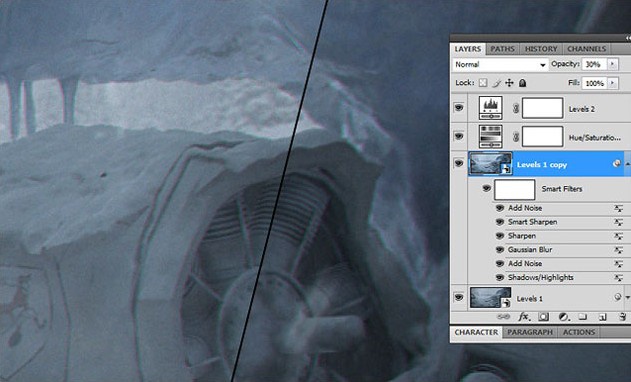 I would like to thank all of my friends for their help and I hope that you all have enjoyed this "Making Of".