Okay, so I didn't exactly know what to paint from the outset, so the first thing I usually do to get rid of the white canvas is to start doodling, just to spawn some ideas. I started by filling the canvas with a mid-grey value so that I could paint both brighter/darker values and push the image contrast in both directions. During this early creative process feel free to use whatever might inspire you, since this is all we are really trying to do here. If it helps to use some photos to manipulate, or 3D objects to start off with, then that's fine; you should never feel like it's cheating! Personally, I started out in black and white with a regular standard round brush and then made a new layer set to Colour mode, and filled it with a purple colour. All I kept in mind at this early stage was the composition; I was doodling around until I found something that felt interesting enough to take a step further (Fig.01). 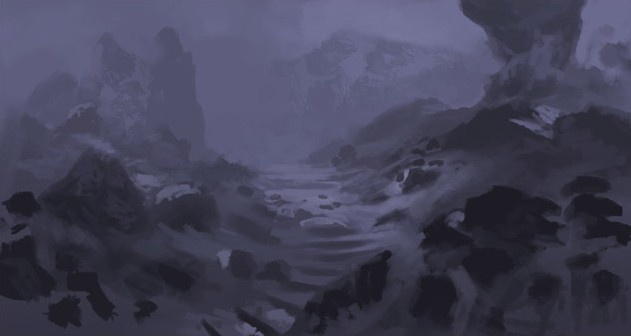 So in step 1 I roughed in the composition and started to get a feel for the image and motive. In this second step, I tried to enhance the depth and overall shapes of the rocks a bit more. For the rocks I imported a photo (Fig.02a), and changed its Curves to match my image a little better. I added this particular photo just to get some colour variation in there to start playing around with (Fig.02b). 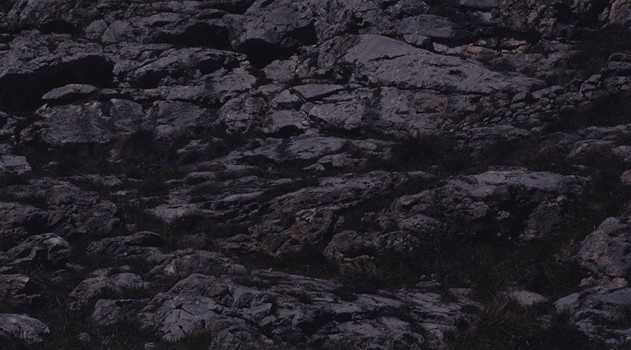 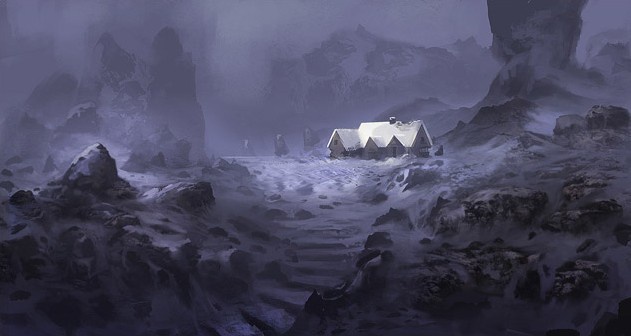 In this stage I added more and more details, just to make it more believable. I painted around and on top of the rocks to integrate them into the snow, and this was also a good opportunity to show where my light source was coming from and introduce more 3-dimensionality to the piece. The figure in the foreground helps to balance out the image since it felt a bit empty and the right side of the composition was a bit too strong, and it also helps the overall interest and silhouette of the image. Another thing that was important at this stage was micro composition, like I was pushing the contrast a bit further in minor places across the image, just to lead the viewers' eyes where I wanted them to go; for example, the highlight on the stairs and some of the rock shapes were places I wanted the viewer to look (Fig.03). 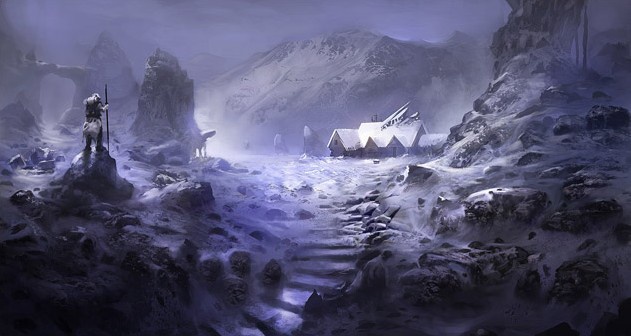 I re-cropped the image to get a more cinematic feel to it, and changed the hues to give it a chilling touch, since I really wanted it to feel like an extremely cold place. To enhance the depth even more I pushed the values into the distant background. I wasn't totally happy with the look of some of my rocks so I did some redesigning and pushed the details even more. For the mountains behind the building I used mostly custom brushes, but also a photo for even more texture. As far as composition goes, one tip that I find pretty useful is to cover the corners, and when the viewer comes close to a corner of the image, try to lead their eyes back into the piece ... this can be done by, for example, pointing shapes in other directions, giving a tint of colour which can be seen somewhere else in the image (the eye will jump to different variations such as colour variation, value contrast, shape variation and so on) (Fig.04).

I still felt like I wanted to make the mood even colder and make it feel like it's really freezing out there, so I tweaked the image colours with adjustments, curves, and hue/saturation. At this stage it was all about making it even more believable with more details and things to look at. For small rocks and dirt, I used a custom brush that had a dirty look to it and, after painting with it on a new layer, selected it and distorted it into perspective. Then it was just to paint some lighter values on it to give the image a more 3D feel (note that you should keep in mind where your light source is located, and do not forget that light bounces a lot - especially on a surface like snow!).

To see more by Robin Olausson, check out Beginner's Guide to Digital Painting in Photoshop