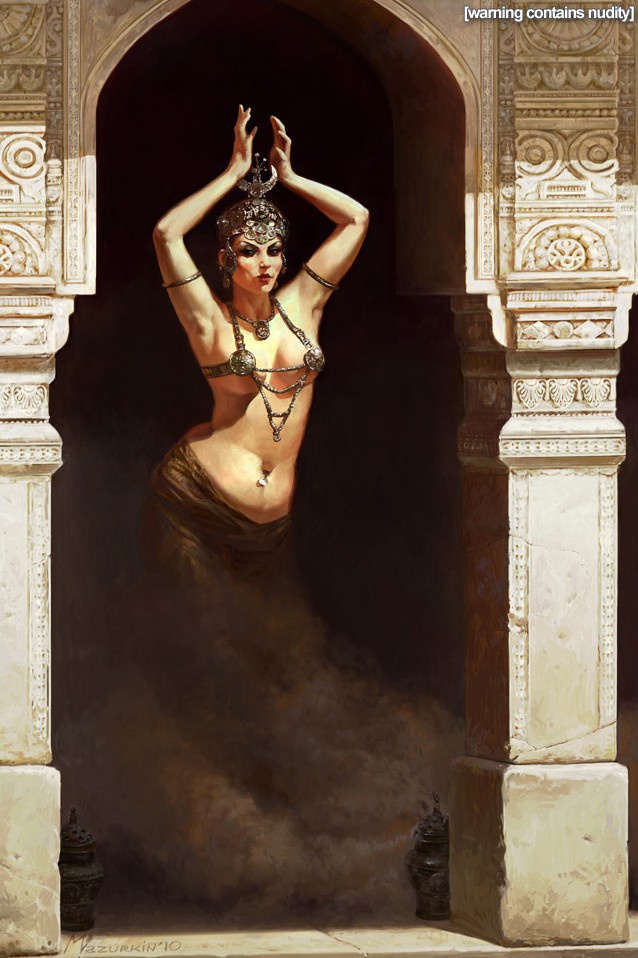 For this image, I was inspired by the book named One Thousand and One Nights. It is often known in English as "Arabian Nights". Genies and the image of Scheherazade amazed my imagination. I wanted to get closer to the east theme and for this purpose I went to look at belly dancing in the night club. When I returned, I picked up a pencil and drew one of the beautiful dancing women from my memory. I realized then that I didn't just want to draw a dancer and so decided to make her a female genie instead.

This sketch was in my desk for about a year. And then one day I just felt it was time to develop the Dancing Genie (Fig.01). 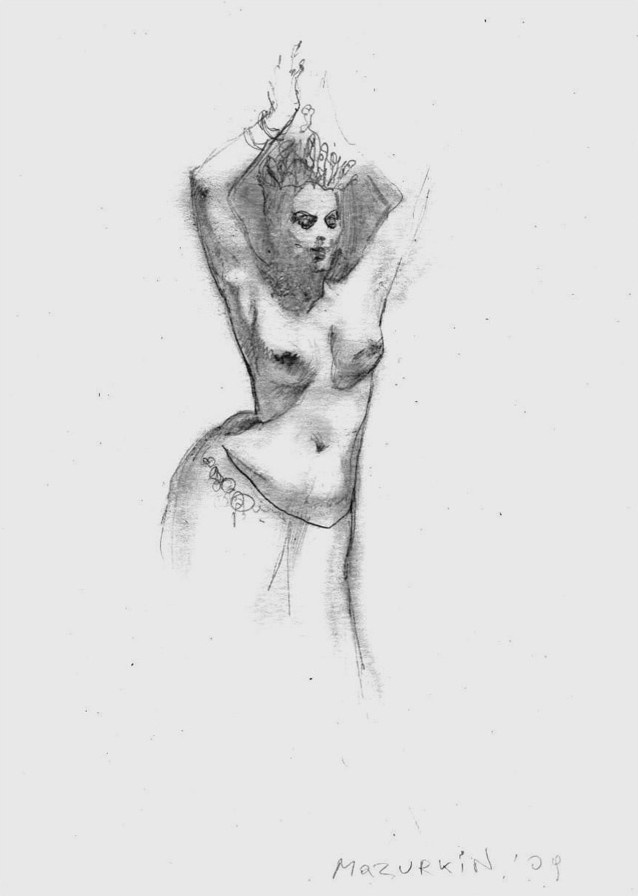 I often make the pencil sketches when I worked. Sometimes I do it from nature and sometimes from my head. I think that it's very important. It helps me to generate ideas and allows me to mark those parts of the picture that I drew well. I never outline my pencil sketches in Photoshop or Painter. I scan them in and place them on the second monitor so I can be guided by them. I do this so lines of the sketch don't limit me when I work with brushes (Fig.02). 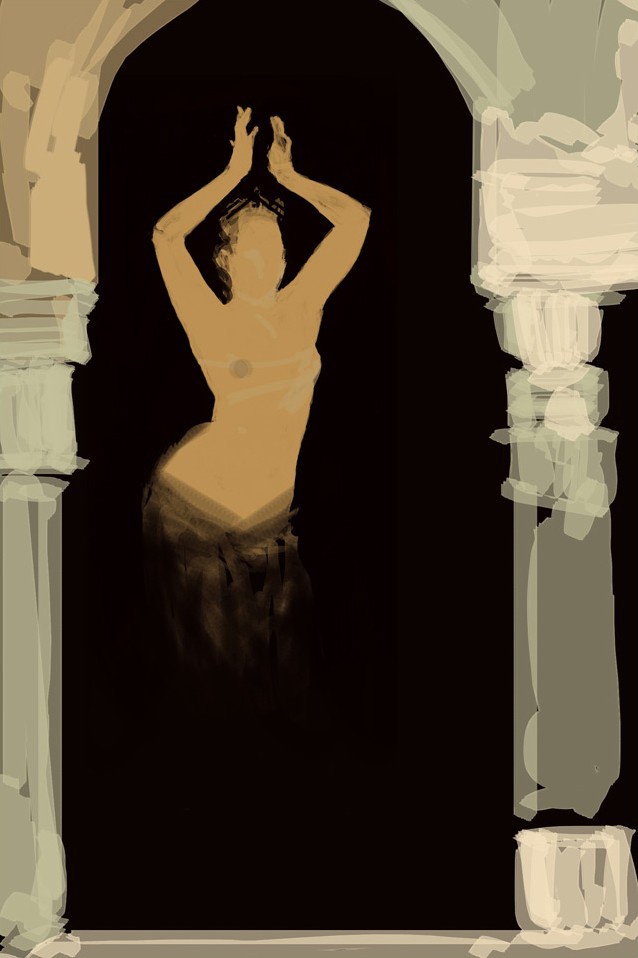 I used Painter X and a little bit of Photoshop CS3 for this work. I imagined how the lightness of the naked body of a woman would contrast with a dark background. To achieve this effect, the first thing I did was add the dark background in Photoshop. Then I used a Chalk brush with Wet Edges and Opacity 80% to make the spots of woman and arch. After that I cleaned the silhouette by using an eraser with a different level of opacity (Fig.03). 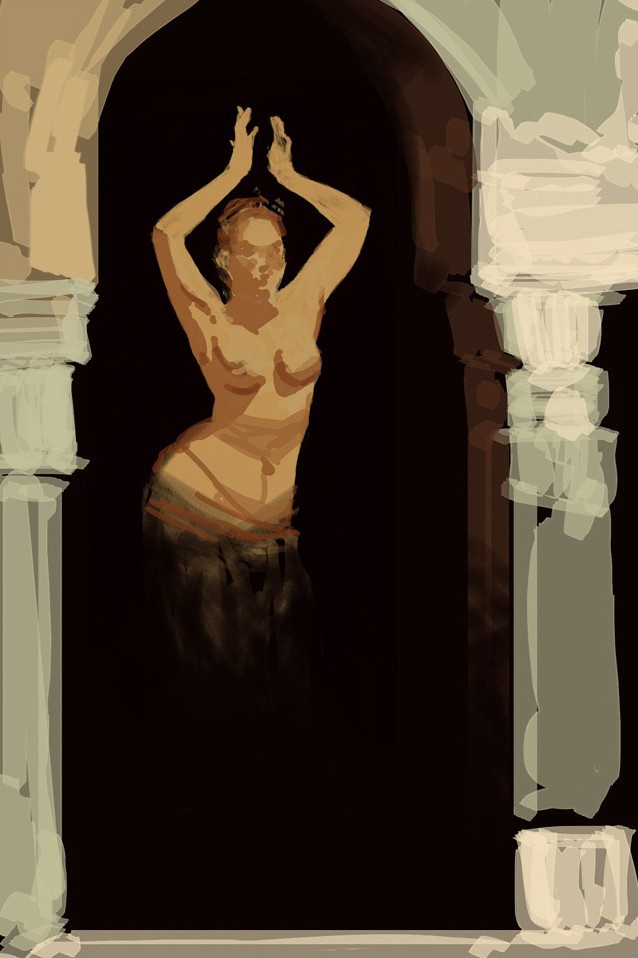 I painted some general features of the face and body and drafted the inner edge of the column a little (Fig.04). 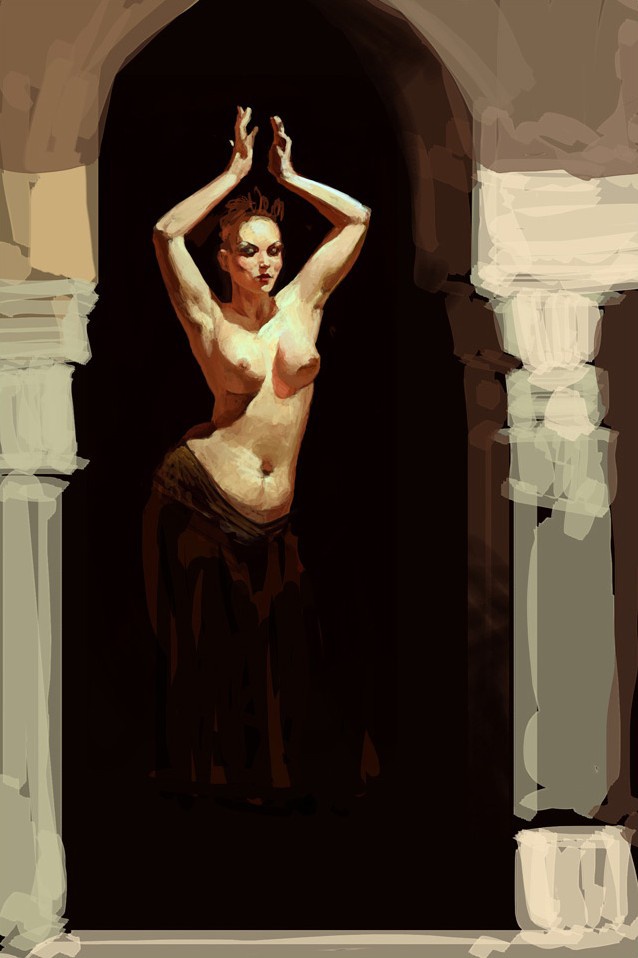 At this stage, I was busy with the treatment of light and shade and anatomy. I used a Hard Round airbrush with Shape Dynamics, Wet Edges and a different level of opacity (Fig.05).Â 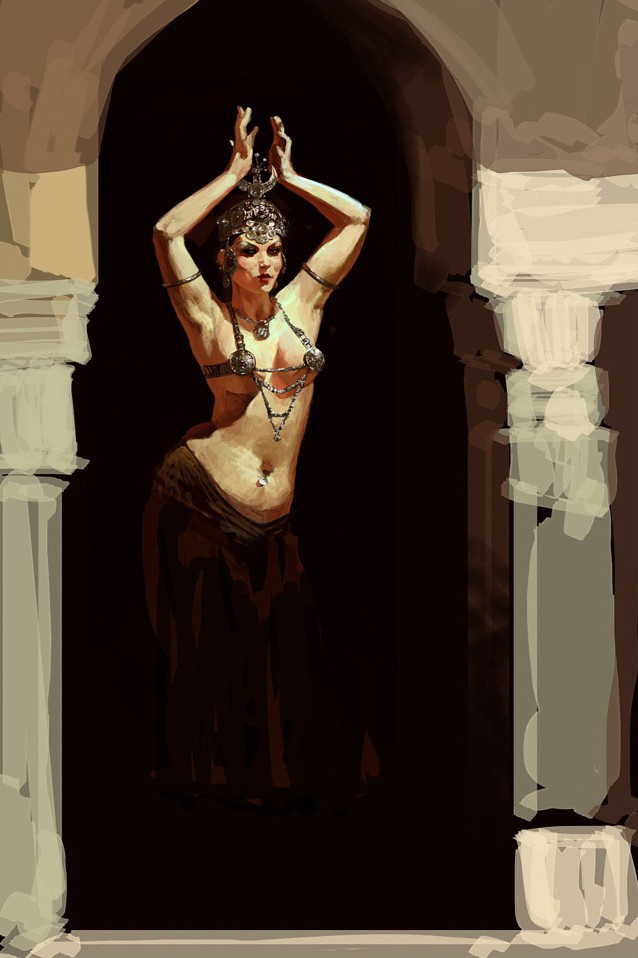 There are a lot of museums in Moscow. The State Museum of Oriental Art is one of my favorites. And my visits to this place got me thinking about possible jewelry I could use in my picture. I did not use historical materials or photo references to depict what I wanted; the inspiration came to me just after a visit to the museum. First and foremost I wanted to draw a fairytale. This picture was my fantasy with an oriental theme. Once I'd painted the jewelry, I realized that the woman's eyes should be looking at the viewer. And I thought that lowering the eyelashes a little would give her an enigmatic expression (Fig.06). 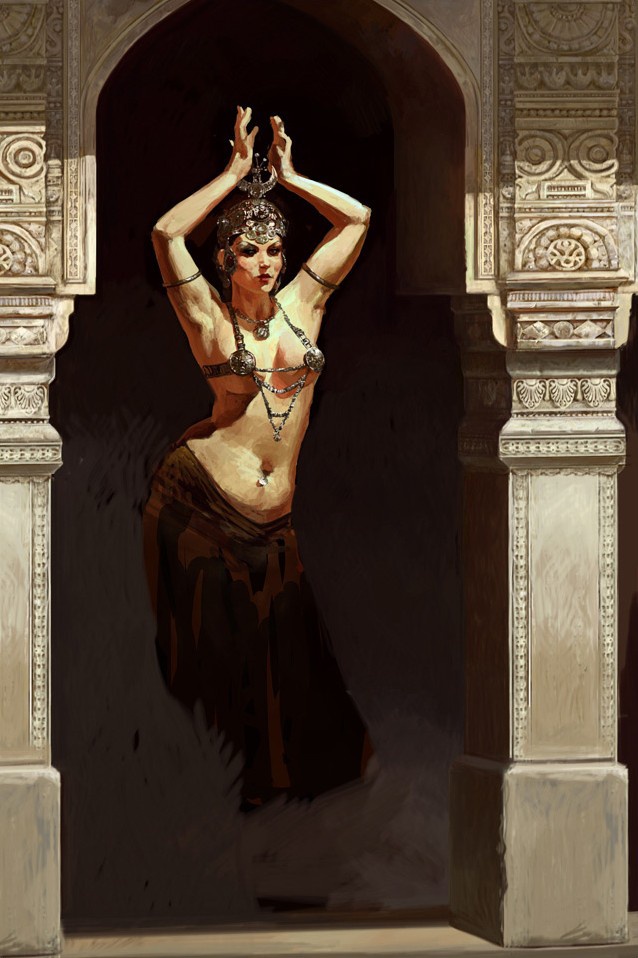 Now I turned to Painter. Probably everyone who works with these programs (Photoshop and Painter) has wondered the same thing: which program is the best? I can't choose. They complement each other. For example, I love the Oil brush in Painter. I continued to work on this picture with it. I used the Flat Oil brush, Opaque Flat (oils) and Palette Knives to paint the ornaments on the columns and the background. I used the Flat Oil brush with low Opacity in a personal layer to add noises (Fig.07).Â 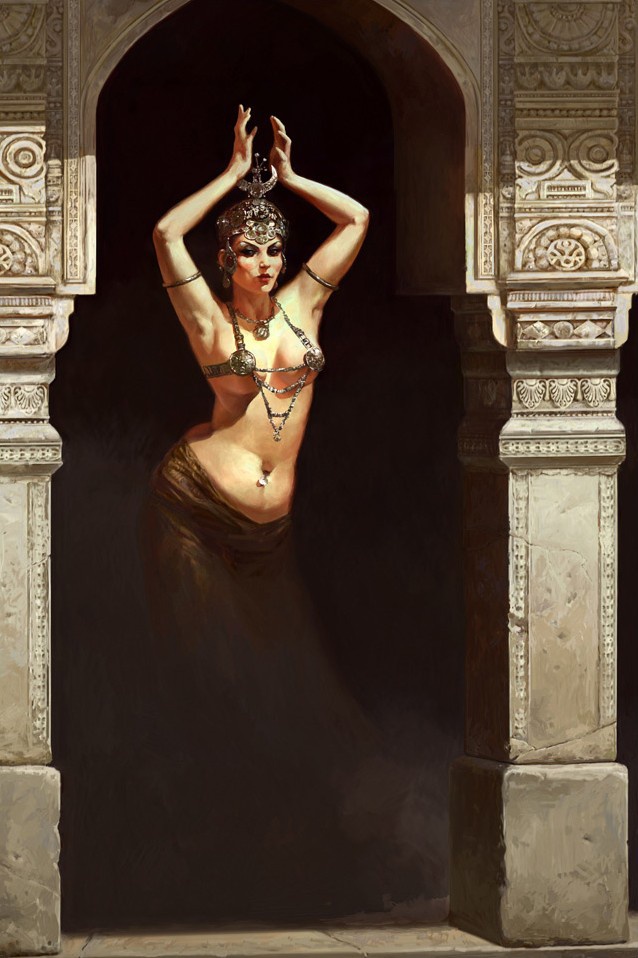 I added splits, cracks and noise to the columns using the same brushes. And I worked with the body of woman to do it more smoothly (Fig.08). 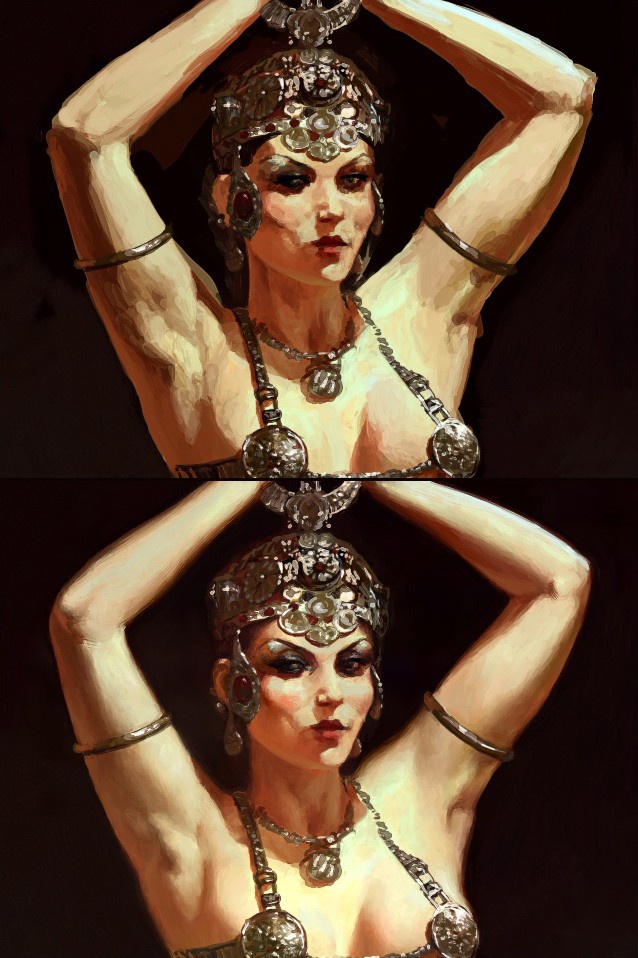 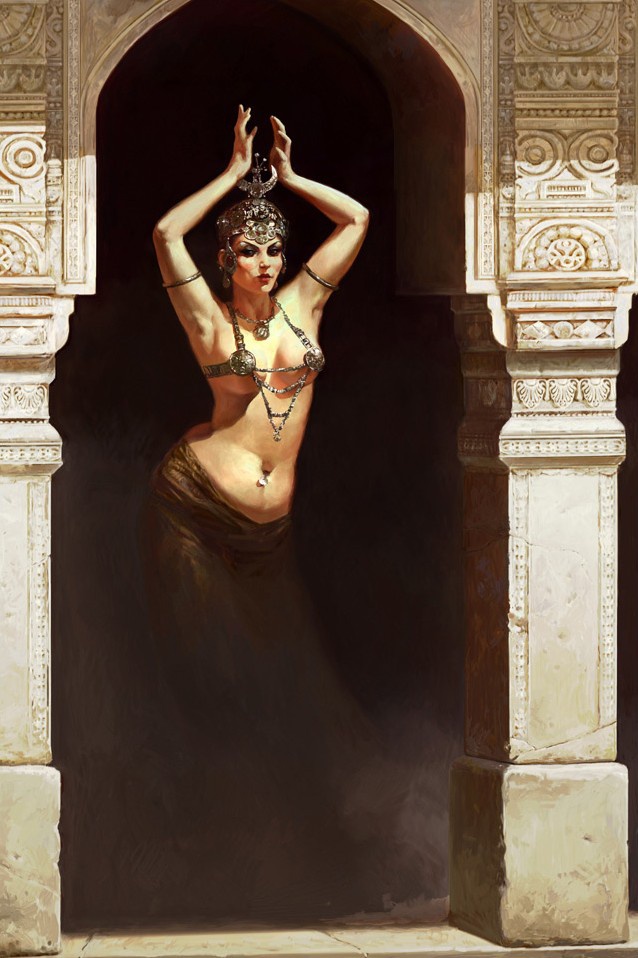 I'm impressed by the artworks of the great Russian artist Vasily Vereshchagin. I really like the effect of illumination, created from the blinding sun, which was used in some of his artworks. So I wanted to try and recreate it in this image. I used a white color and Hard Light in the properties of the layer. After that I changed the Opacity to 70%. I applied it only on the pillars and arch (Fig.10).Â Â 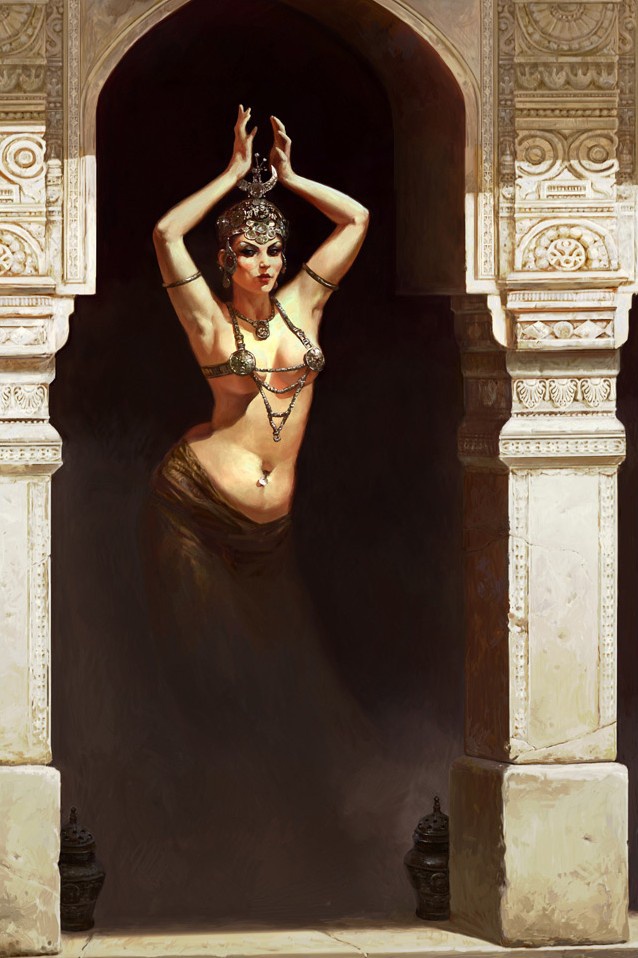 Censers and the metal parts. I used Oil brushes and a Fine Detail airbrush for the details. I used the Glow effect to depict the splendor of the metal. At first, I was searching for Arabic censers, but then I liked the form of Chinese censers and so I decided to compile these two. I thought that the principle of incense, in any case remained the same, because it's only a pot of coals with holes in the lid. Fantasy art allows such liberties (Fig.11). 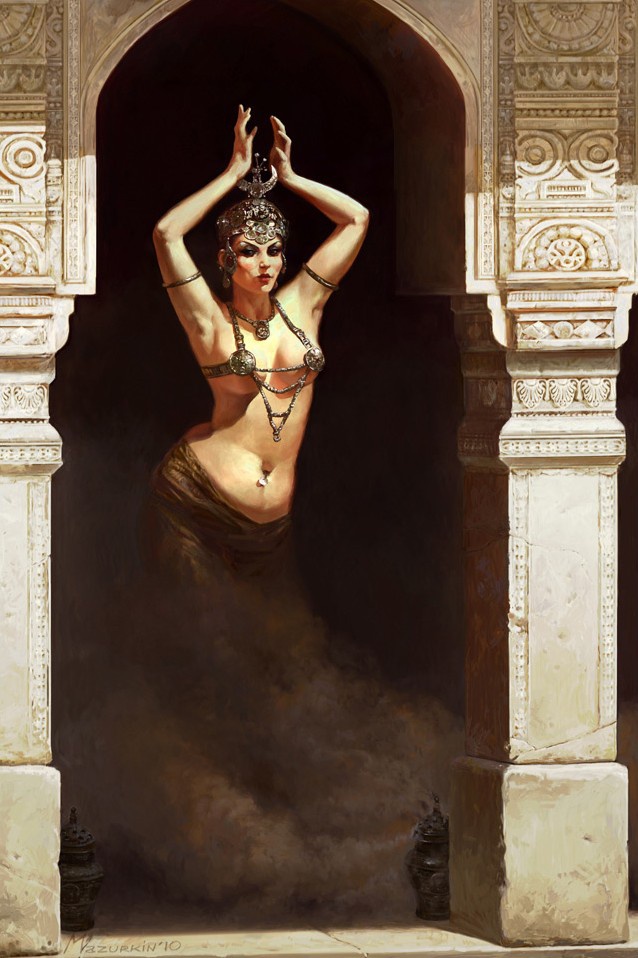 It took me a lot of layers to depict the smoke. I made puffs of smoke using Oil brushes with different diameters. I had to reduce or increase the transparency of each layer. At the conclusion of artwork I did a few multi-colored transparent layers to make the smoke more unusual.

Despite the fact that I put off the pencil sketch and returned to it later, I really enjoyed creating this image. Sometimes it's useful to stop at some stage and then come back to the work with fresh eyes. I love the plasticity of the females. It's very difficult to depict a natural woman, but this is the most interesting challenge for me.