Making Of 'City Of Angels' 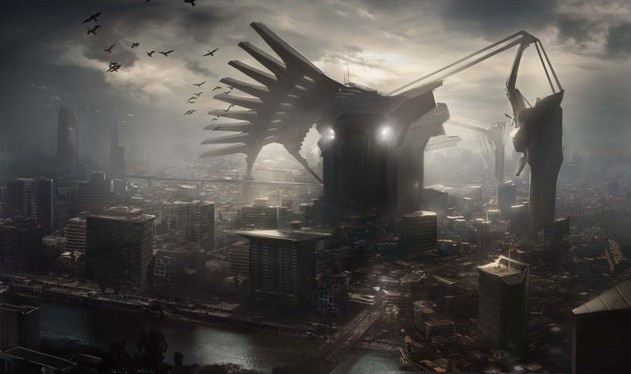 My name is Frank Hong and I'm a concept artist based in Toronto Canada.

The City of Angels matte painting was a personal piece I finished in 2009. It's more of a spontaneous piece since I didn't have a clear idea of what I wanted going into the process. As there wasn't a brief, I was free to take the image
in any direction I wanted.

To create an environment, setting the right mood and atmosphere is, in my opinion, the most important part. It's like giving personality to a character; it just needs to be there. In this case, I decided to create a sci-fi cityscape at dawn and to take advantage of the morning fog to get the cold and dead feeling I wanted.

In my research for the piece, I liked the looks of the not-so-perfect cityscape. Tall, old buildings and messy layouts spoke to me better than clean cut matchbox sci-fi. I wanted to use this contrast between the new and the old. I took
a reference image and horizontally copied it three times (Fig.01) making the connection almost seamless. This
filled the left part of the city base. 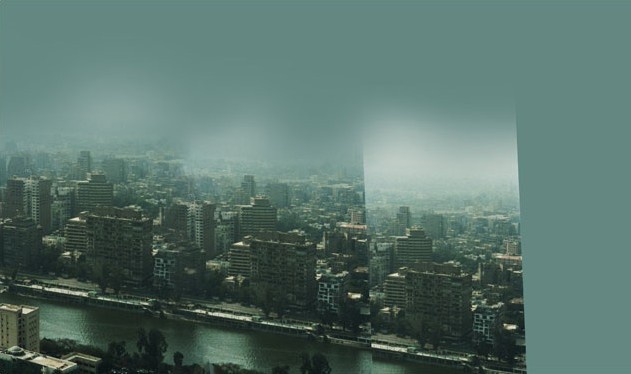 When I create a new image, I like to go through my research folder and decide which picture I am going to use for what. In this case I already had an idea of the picture that was going to fill the right side of the city. This was a great image that gave me a lot of reflections on roof tops and just the right amount of fog to separate the mid ground to background layers (Fig.02). 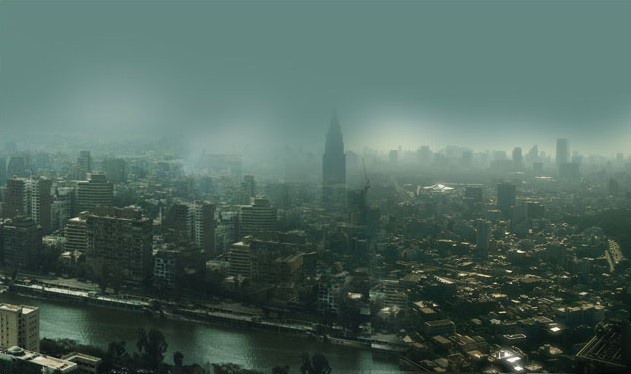 I copied the silhouette of the background buildings over from the right side (Fig.03). Because there was such a difference in light direction in the two images I used, there was quite a bit of work to do to make them sit in the same image. 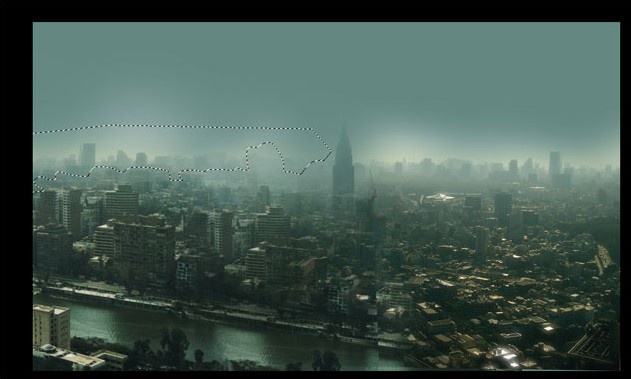 I wanted to find a good mood for the image and the green was starting to look a bit harsh to me. With a Color Balance adjustment layer, I was able to raise the red in the picture, and get something like this (Fig.04). 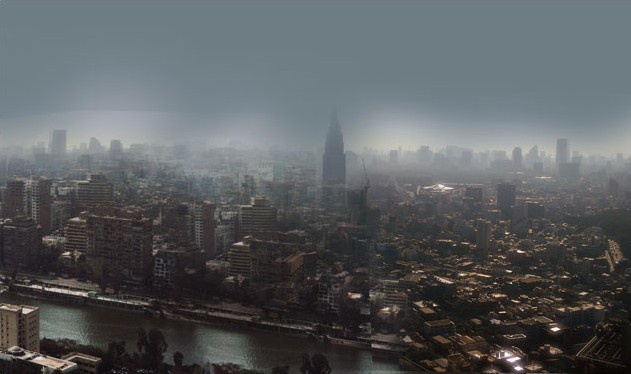 Next I looked for an image of the sky. Something like the one I found worked great because it matched the intensity of the light. The direction of the light source seemed to complement the city too (Fig.05). 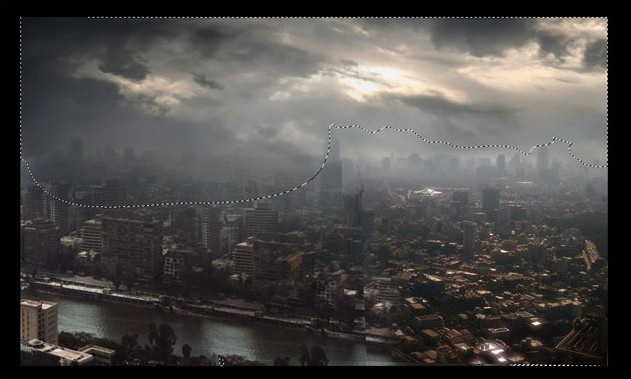 I applied a mask to the sky layer to paint in the areas I wanted to erase. It's a good idea to keep these edits non-destructive because you never know when you're going to need to come back and change something later. The mask can be seen in Fig.06, where the white parts were meant to show and the black parts were blocked off. I was able to paint into the sky fairly easy with this. 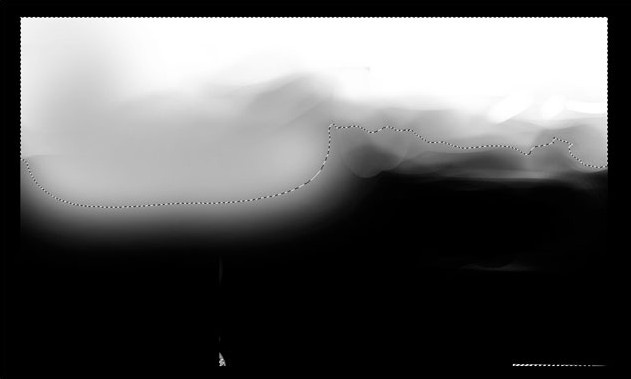 I started to roughly paint in some buildings that stood out (Fig.07). Adding highlights to the left side of the city made the image more balanced. With the right side dimmed down, the differences in the original photos weren't very visible anymore (Fig.08). 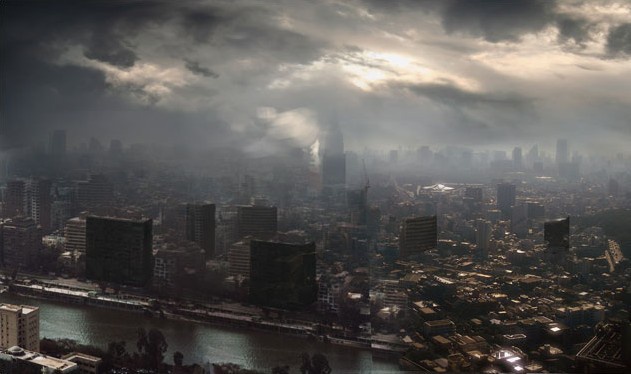 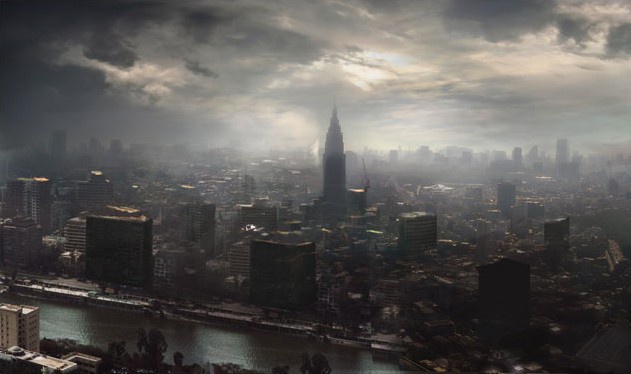 I used the Polygon Selection tool to create some shapes for the high-rise sci-fi structures (Fig.09). With that selection, I was able to paint gradients inside the shape and maintain a sharp and crisp edge. I used this technique to make the base for the center structures. 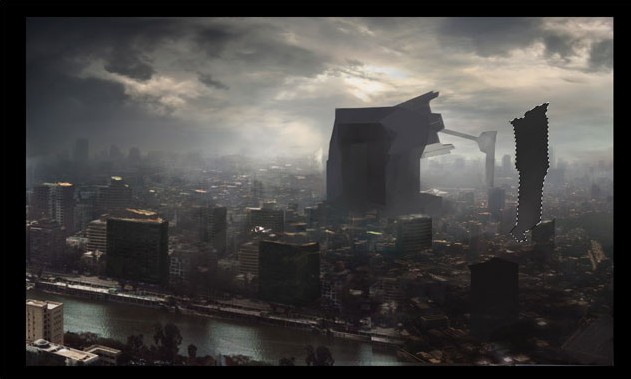 Some structures were added with custom brushes. These little doodads can add a bit of interest to the image and make the silhouette read a bit better (Fig.10). I want to point out that the fog is heavier at the bottom to make the bottom of the structure lighter and closer to the tones of the city. This gives me a good and gradual change to the tip of the structures where the silhouette is dark against bright, and clearly readable. 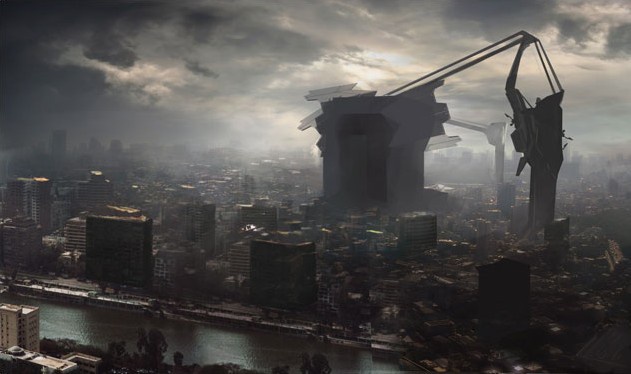 Here I started to make the "wing" for the angelic structure, starting with one piece of the "feather". Having it curve a little and with gaps in between made the finished wing look pretty decent and this is done with a simple custom brush (Fig.11). 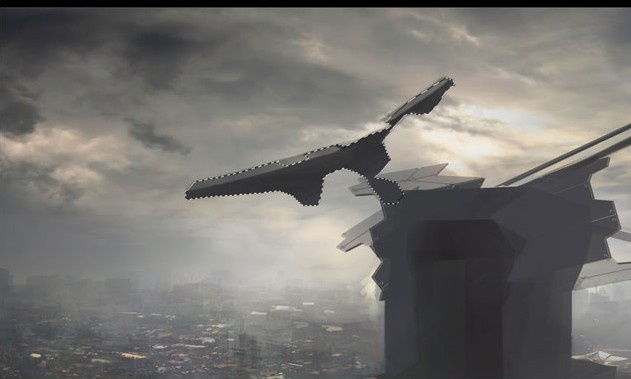 I then hit the record button on my actions editor in Photoshop. With this I was able to record the transformations I applied to the "feather". With that button activated, I duplicated the "feather" layer, free transformed and rotated it a little bit downward, as shown in Fig.12. 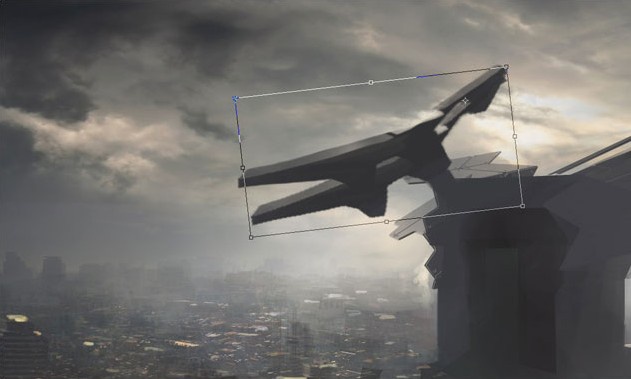 I then stopped the recording and played it back several times to get this result, which is pretty cool (Fig.13). 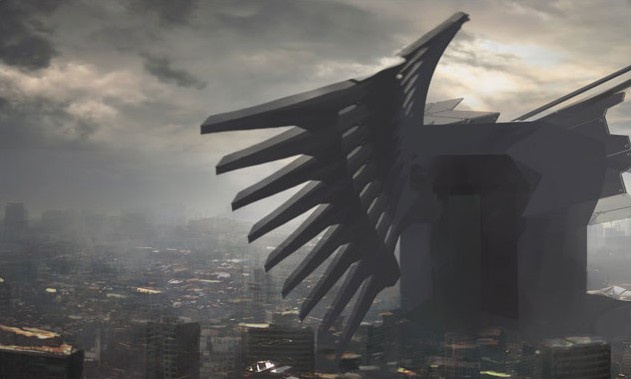 Now with the entire wing selected, I rotated it up to give it a spread wing feeling (Fig.14). 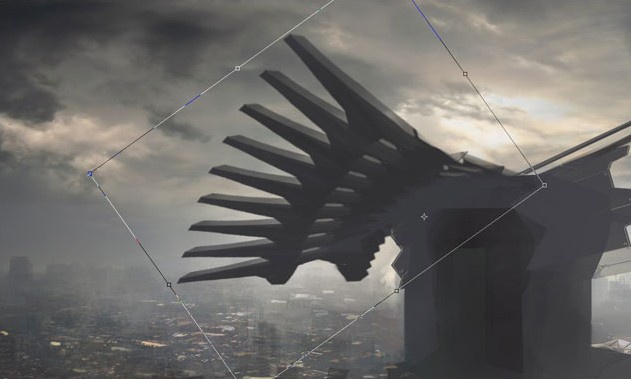 Then I flattened the layers to be able to paint on top of it. I added the fog on the lower parts of the wing to establish distance and space (Fig.15) & (Fig.16). 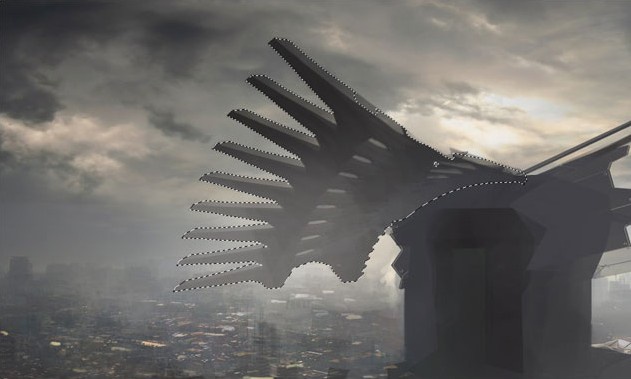 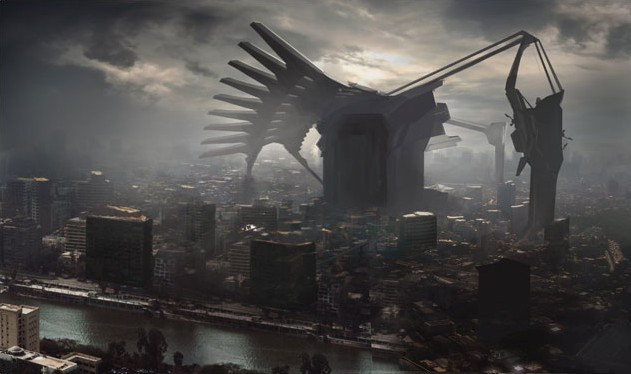 I continued to define and detail the cityscape. Then with an overlay layer, I was able to do some adjustments with a soft brush, such as pulling the colors and brightness in a direction I wanted (Fig.17). This was more useful towards the end of the painting session, to harmonize the colors a bit more. 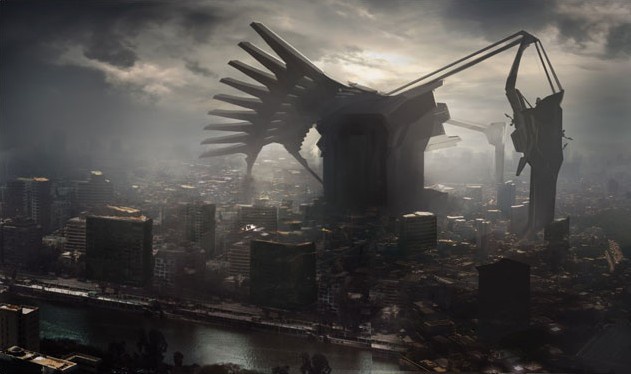 To finish defining the cityscape, I added bridges, refined building and cleaned up some roof top reflections (Fig.19 - 20). The buildings in the back added a bit of layering to the piece. This was really the last pass of the detailing before calling the image done, so I wanted to address every issue I still saw in the painting, including fixing sides of buildings and filling in more structural details all over the place. 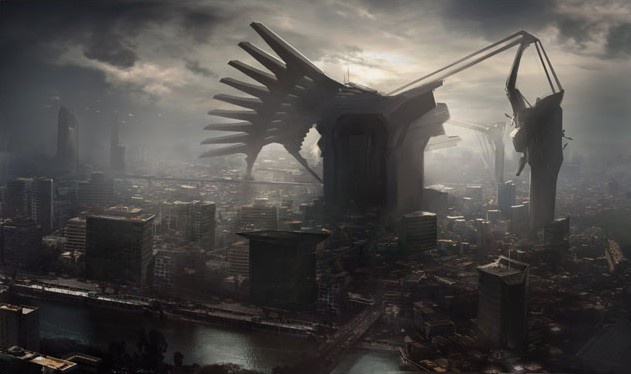 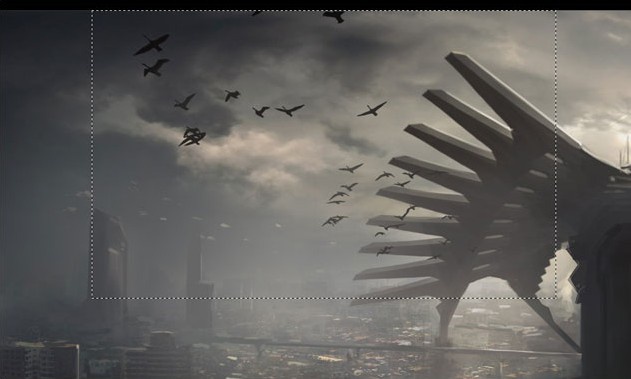 I dropped a picture of birds flying into the picture. Something like this really adds life to an otherwise dead image (Fig.20).

In the final few steps, I decided to add some spot lights to the angelic structure. To give it eyes and make it the focal point of the piece (Fig.21). I added reflections off of the buildings on the bottom, and with a layer of Color Dodge, I brightened the spot lights to be a major value contrast in the painting. 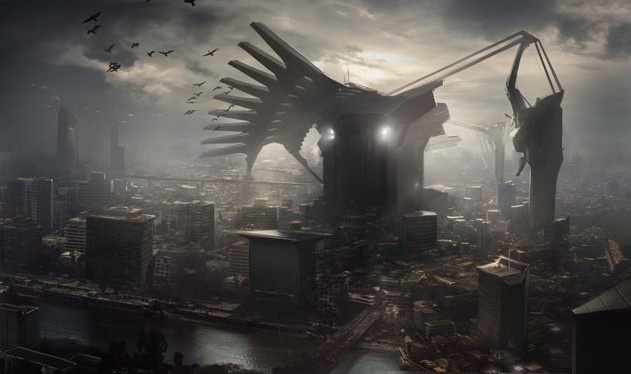 Then all that was left was to apply the last layer of overlay, some glows and shines to the bright reflections of buildings and in general to make the lights and darks more controlled and focused (Fig.22). 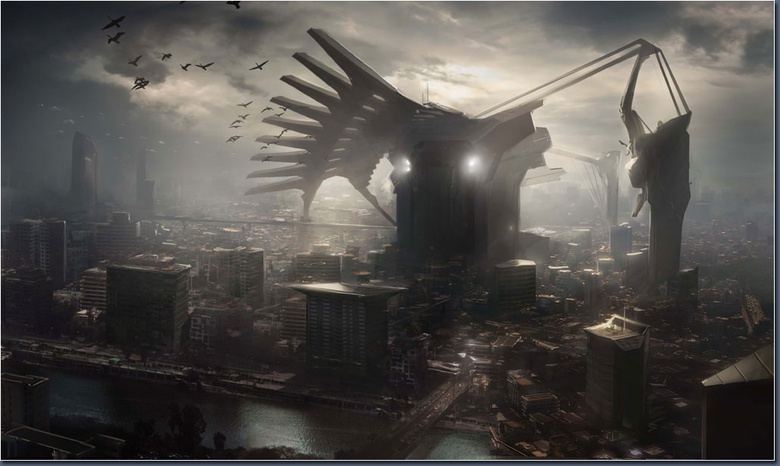 I hope you enjoyed this Making Of and best of luck with your own work.
You can find my portfolio at http://artbyfrankhong.com