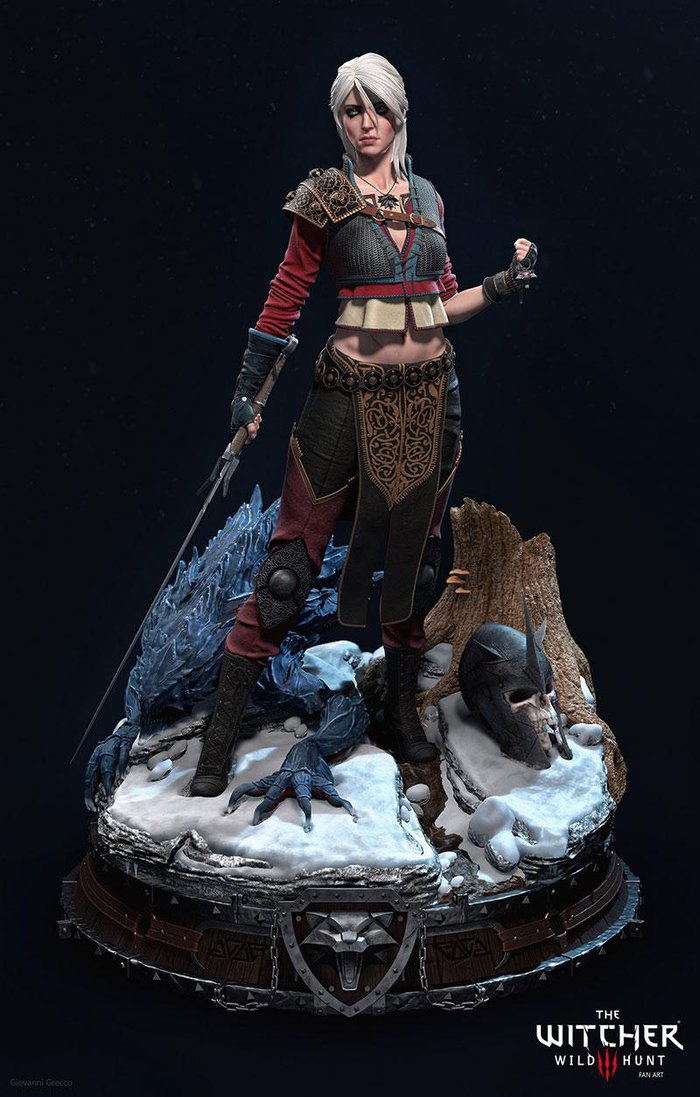 Giovanni Grecco takes us through the ZBrush workflow for The Witcher 3 character Ciri, the weapons, and an ornamental base...

Hi! My name is Giovanni Grecco and I'll guide you through the workflow I used on my last personal project "Ciri Alternative Look Fan Art". The idea here is to give you an overview of my process for making a 3D sculpture for collectibles so you can learn something from it and adapt it to your workflow. Let's get started!

This is one of the most important processes, it can define your success or failure during a project, be wise and self-conscious of your level before you choose a concept. If you choose a very complex work that is awesome but very hard you have to be an advanced artist, otherwise you'll end up frustrated and with a project "in your drawer." On this project I decided to challenge myself to make one of my favorites character from "The Witcher 3," Ciri, based on Prime 1 statues from the game, and using her alternative costume from the DLC. 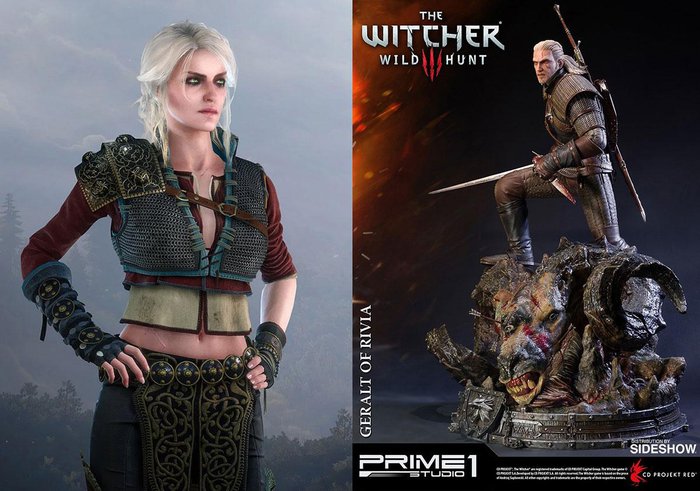 This step plays a big role in the project too. Find as many references as you need. It's important to have all sorts of references on your side so you can make a work that is very similar to your concept, believable and functional as well. I usually gather images on a board, so I can navigate through it and find the reference I need. I recommend you check out a program called PureRef, it's amazing and helps a lot when I put all my references together, you can organize it exactly the way you want. 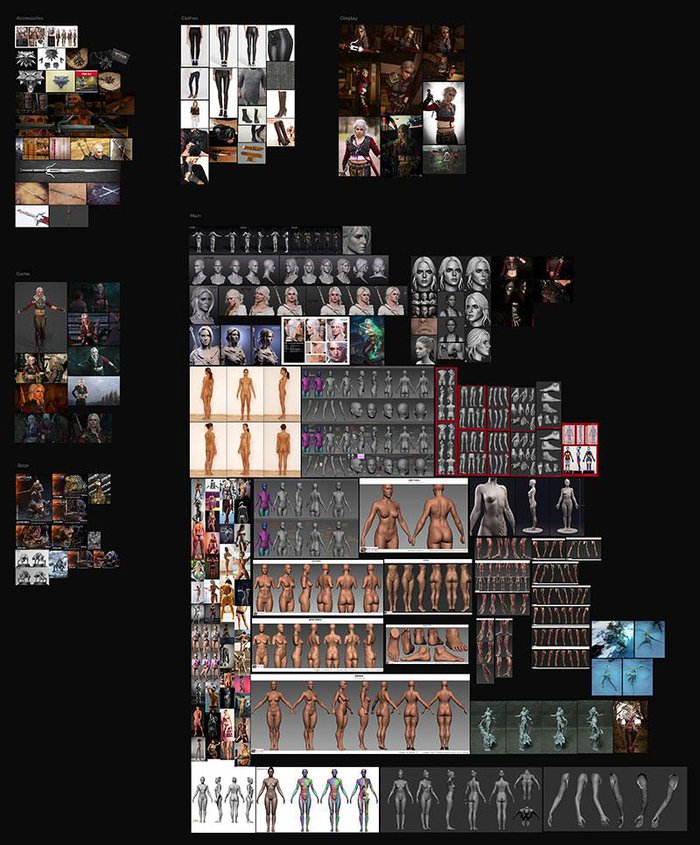 When everything is set up, I open ZBrush and start to block out the statue. There are many ways to start, but I prefer to start from a sphere using dynamesh to get all the forms and proportions right so I can move on to the accessories. Using the extract function on ZBrush is my go-to option to make the base clothing and some props. But when I need something that's very hard surface I move on to Maya. In this step, you should have a base model to start, with everything blocked out. 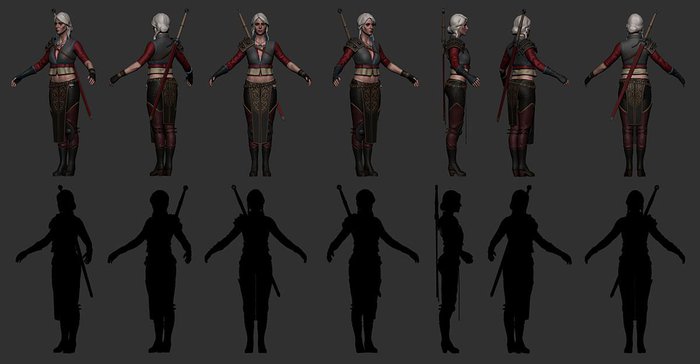 When I'm doing a collectible statue, I need to make it on a very cool pose, it's nice to have more than one option in this step, so you can decide which one is better. Thinking of the statue balance, contrapposto, silhouette and dynamics, I block out my pose ideas. It doesn't need to be very clean and refined, it'll only serve as a reference for a future step. The Transpose Master tool in ZBrush is your friend here, use it! When you define it, you can move on to the next step. 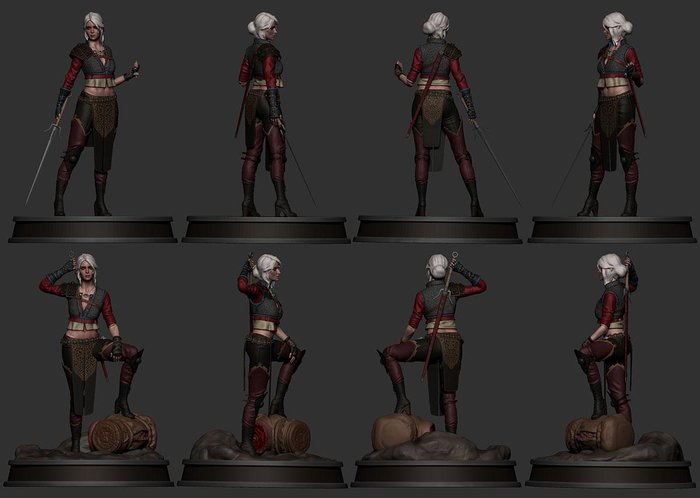 Two variations of the pose, the first one was my choice

When I decide my pose, I can go back to the T-pose character and start to refine everything that's not going to be completely modified when I pose it for real. Pretty much everything that's symmetrical and hard surface I can refine in this stage. Keep in mind that this is a statue, so when you pose it, folds will have to be adapted, and a lot of work will have to be made with the model posed. It's a good idea to make UVs in this step too, again, if the object doesn't change drastically in the pose process. 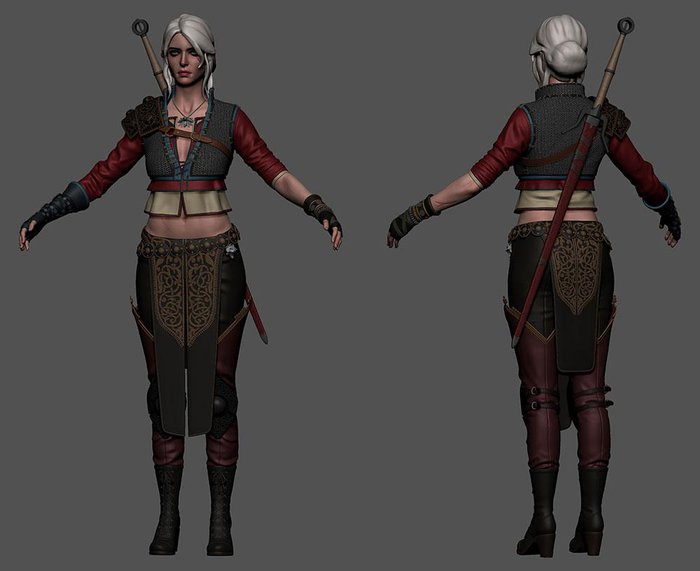 On Ciri, I had to do a lot of ornaments. It can be tricky, but with time you'll get used to it. With UVs defined, I exported a snapshot to Photoshop and started working on top of it using the brush tool with just black and white values to export it as an alpha to ZBrush. I recommend an app called Lazy Nezumi to Photoshop, it works like lazy mouse on ZBrush. Import the black-and-white file as an alpha inside ZBrush (flip vertically), select your SubTool, go to Masking and select Mask by Alpha > Mask by Alpha, then use Deformation > Inflate and that's it! 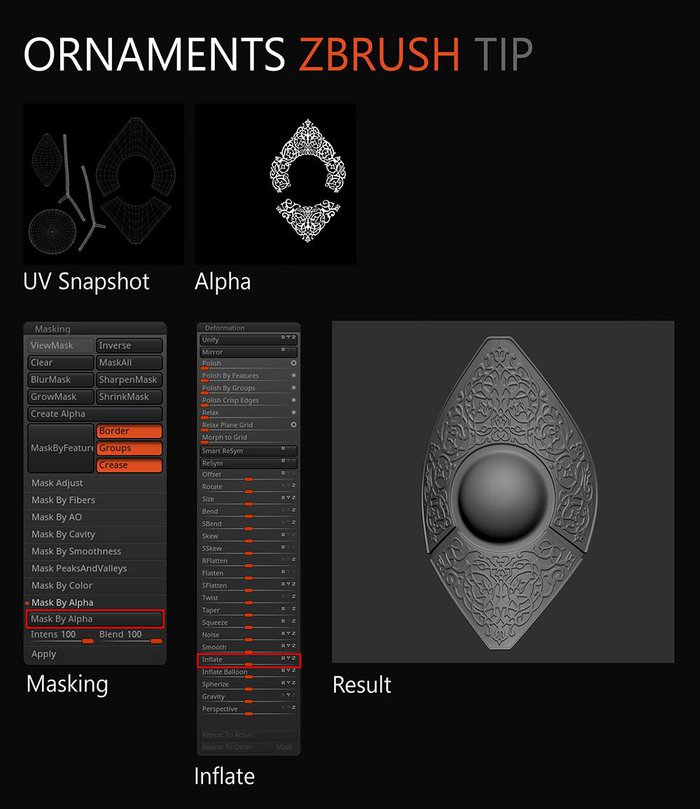 After the first pass on the refinement, I pose my model, this time with more patience and taking my time, make sure to make it as clean as possible and follow your reference from the pose concept. Some damages will occur, you can't avoid it, but that's why you can't waste time refining something on the previous step that will be damaged on this one. Use ZRemesher, Dynamesh, retopology, all you need to fix the mesh, then sculpt on top of it again, refining it on the pose. After this step, your statue should be ready to be detailed. 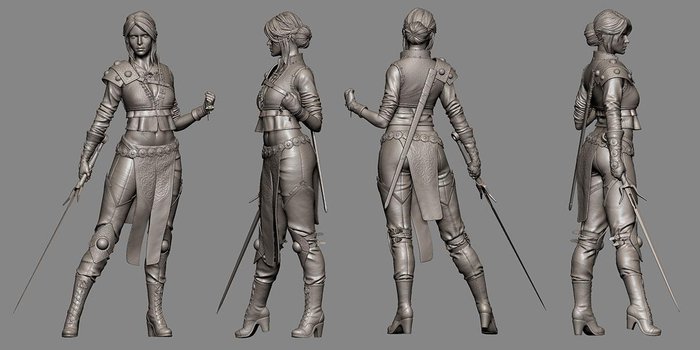 Character refined in the pose

Hair is an important step too; I will not get too deep in this making of because it can be a single tutorial of its own. In general, I picked up the hair made on the block out and finished its silhouette and primary forms, then I added a bunch of hair insert meshes for 3D print, you can find a lot of these brushes on the internet, but it's not difficult to make your own. After I placed the secondary hair I filled up the missing parts with Dam Standard with Alpha 39 and 200 on Lazy Mouse Radius. 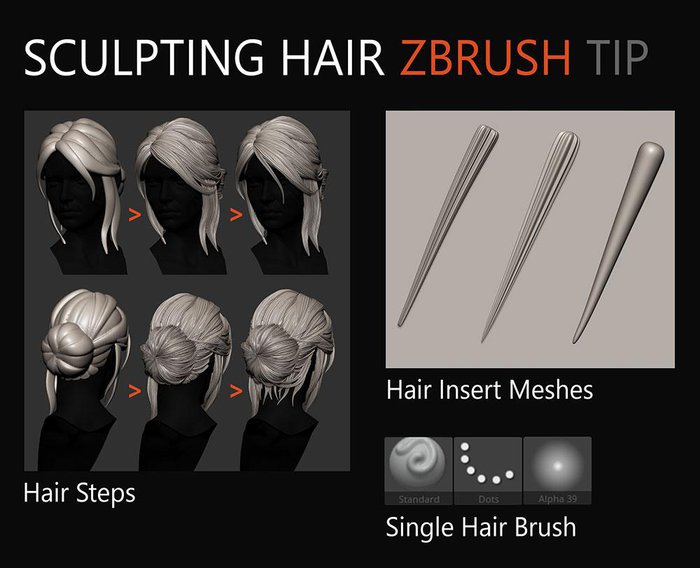 This is where things come alive. Take your time to detail your model, it's a key step to an awesome looking statue. Don't use only one surface noise alpha, it will look fake. Mix some alphas, detail on top of it manually, damages, holes and some extra imperfections to the surface is the secret to make it look like a real thing. The only thing I recommend detailing when the statue is still symmetrical is the skin, because I like to make it manually using alphas from Surface Mimic and Texturing XYZ. There are only a few steps left now! 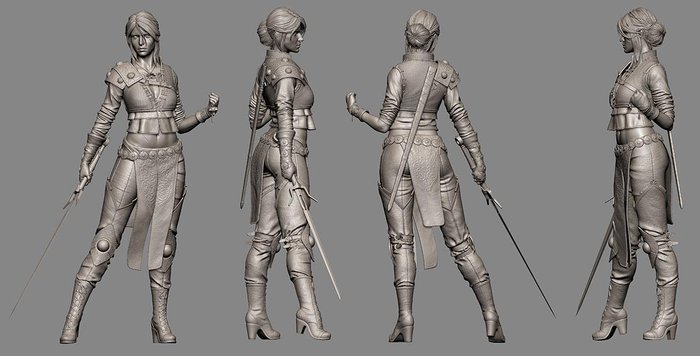 I see the base as a "second character" during a project for collectibles; it has all of the previous mindset on it, aiming for a company like Prime 1 where bases are very detailed. You'll need to spend a great amount of time on it to look good and match the character quality. Follow the same logic here, block out the base, refine it, detail it. The base and the pose need to talk with each other, they will define the statue composition and silhouette. Also, the base is a nice place to tell the history behind the statue.

It's time to cut out the model to 3D print it. When a model is printed it will look like a "LEGO", with a lot of separated parts to assemble during the final production. When you cut out a model keep in mind the kind of material the casting is going to be, the place of cutting, the painting process and the size of the part. Depending on which company you are working, the lead engineer will ask you to cut the model on a specific way, so don't worry too much when you are doing a personal project. 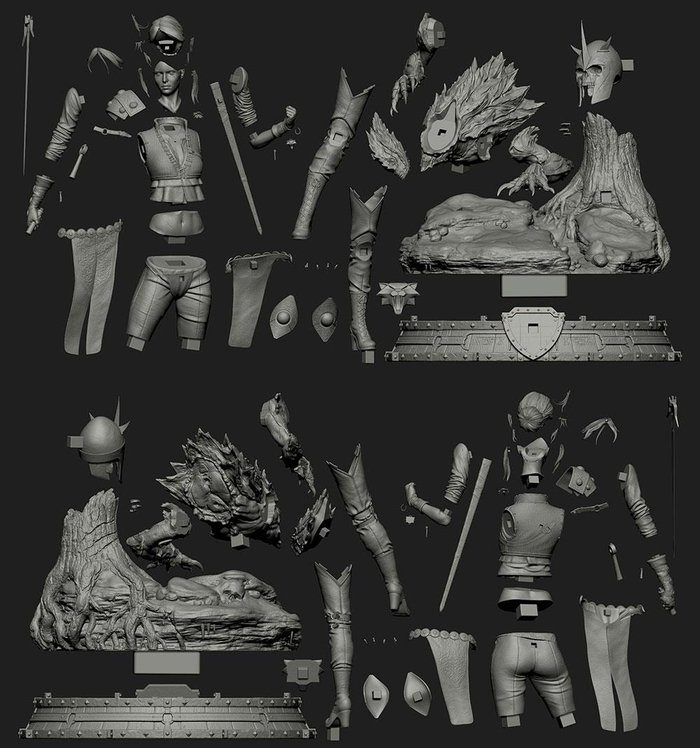 Model with all the cuts done

Live Boolean on ZBrush 4R8 is an awesome tool! It can save a great amount of time during the cutting process, just place a key on the "male" part, check the subtraction icon on the SubTool you want, turn the live Boolean on to check it out and then go to SubTool > Boolean > Make Boolean Mesh, it will give you a perfect "female" Boolean mesh in seconds! 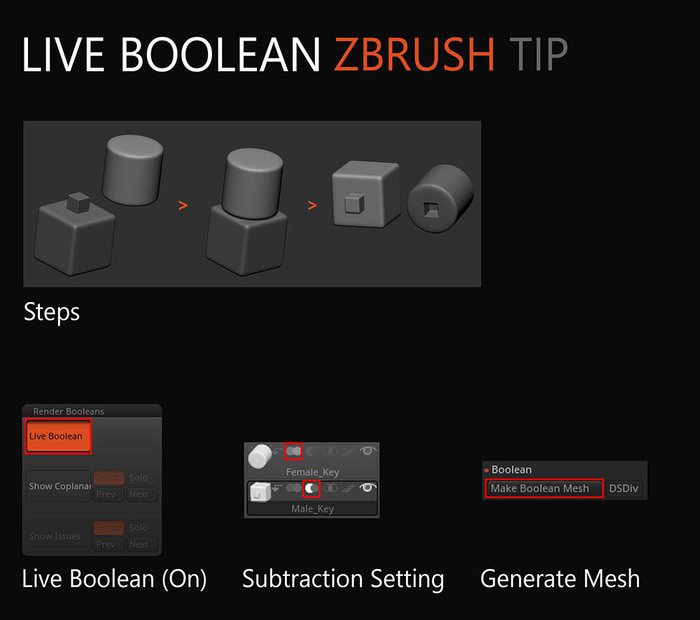 This final step is completely optional, but it's nice on a personal project to give a glimpse of what the statue would look like produced. My choice of render engine was Marmoset Toolbag 3 which I'm already confident working with. I textured the model in ZBrush basically, kept the UVs when I decimated the model and set the scene inside Marmoset with the final decimated meshes, then I created the shaders. It gives a nice finish to the model and your project! 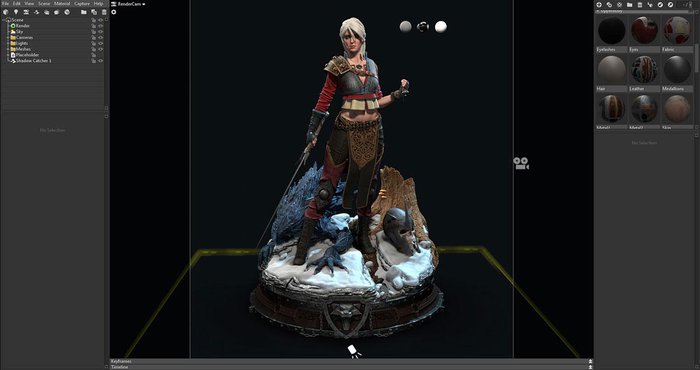 Grab a copy of Beginner's Guide to ZBrush