I believe there are lots of people like me who have learned by themselves and don't have an artistic background. If we want to make an accurate character model, I think the most important thing is not only to read the books about 3D skills, but also to learn human anatomy and study books about artistic theory - it's really helpful! When you read those books, you'll gain a greater understanding of the human structure and when you know what that structure should look like then, of course, you'll know how to make the model.

Ok, I think I've saying too much so now I'm going to share my workflow and my experiences with you.

Before I started the modeling process, I needed a concept. I set her background as the following: she was about fifteen years old, born into a middle class family and living in mainland China in the period of the Republic of China, in mainland China. After the conception work was completed, I start to search references for dress on the internet (Fig.01).

I made the base mesh in 3ds Max and unwrapped its UV. Then I exported it into ZBrush for sculpting and after finishing the sculpting, I imported it back into 3ds Max for rendering (Fig.02). 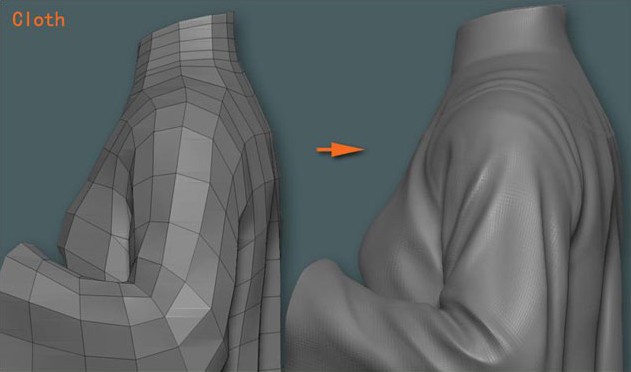 I used box modeling to create the head (Fig.03).

It is said that "all roads lead to Rome" and the same is true of modeling human heads. There are many different ways to do it and every artist has their own way of going about it. The most important thing is to understand the structure of the things you want to make. You could think about it like this: if you don't know what Rome looks like, or where Rome is, how could you possibly get there? Even if there are millions of ways to reach Rome, you still can't get there right? So here I'd l like to point out some important features of a head.

Beside the "Rule of Thirds" and the "Rule of Five Eyes", there are still some key points that we should pay attention to, which I learned from a book called The Artist's Complete Guide To Facial Expression, by Gary Faigin (Fig.04): 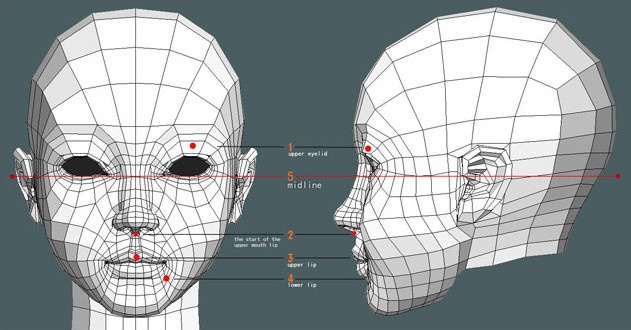 I used 4k maps for the face texturing process. It's really amazing; it contains so many details that you don't need to paint a bump map. You just need to make a little color adjustment, plus draw the mouth lip details.

There are seven textures for the SSS material (Fig.07). They are as follows:

About the SSS material: there is not a standard to measure what a skin material should look like. You can fiddle with the parameters to get the result that you want, it could be super-realistic or fantastic or a cartoon style - it's up to you.

Here I made a weight map for the subdermal layer, because this is a underage girl and so I wanted to make some parts of her face looks more tender than an adult's, such as the lips and the cheeks. 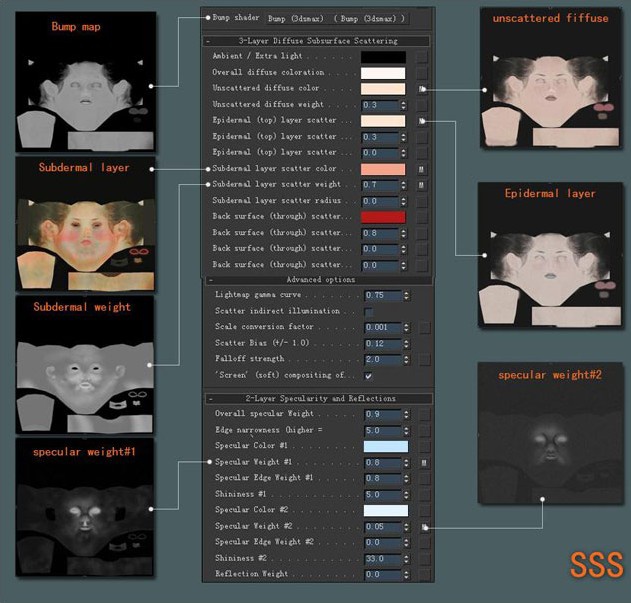 I applied a tileable fabric bump to it, in order to get the right scale for the fabric pattern. I tiled the map 100 times and then set its bump value to 999, which gave it a nice fabric look. I made a Chinese-style red color for the cloth and added a Chinese-style flower pattern to the collarband(Fig.08).

The lighting set up was pretty simple. I used a "wall" to "cut" the key light as this made the lighting more natural. I then added a couple of other lights to act as environment lighting (Fig.10). 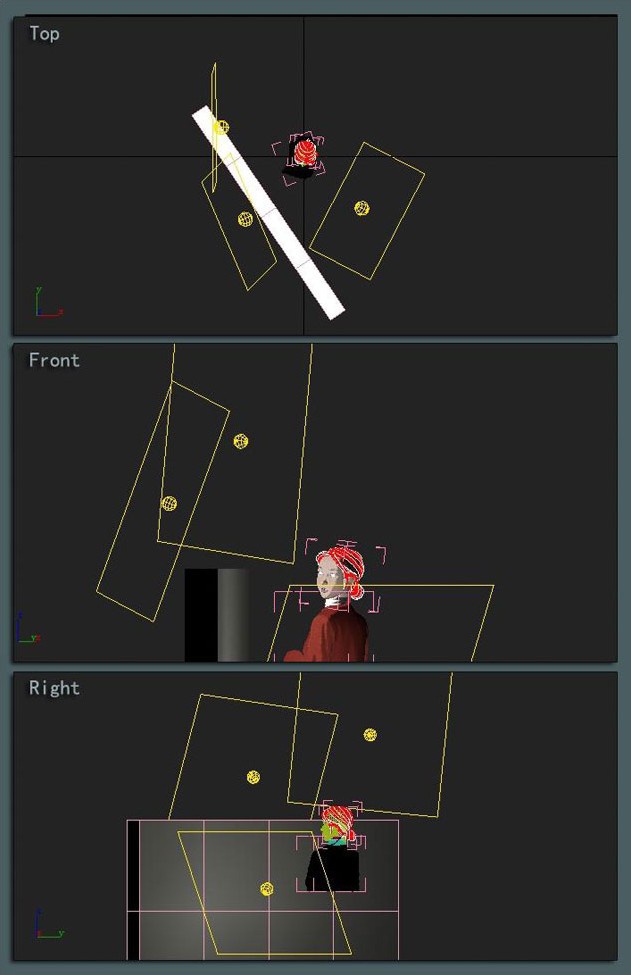 I used V-Ray to render the reflective object (headwear, collarband, earring etc) and a facial reflection pass. Other things were rendered in mental ray and then everything was composited in Photoshop (Fig.11) 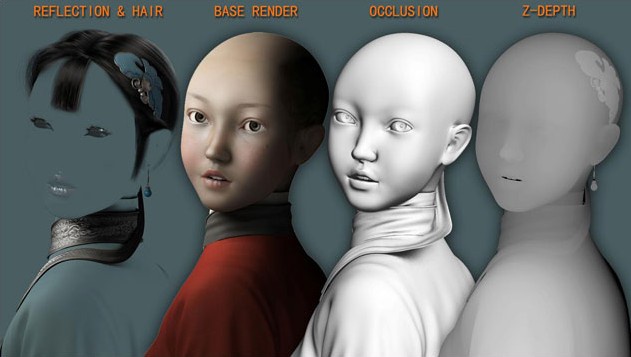 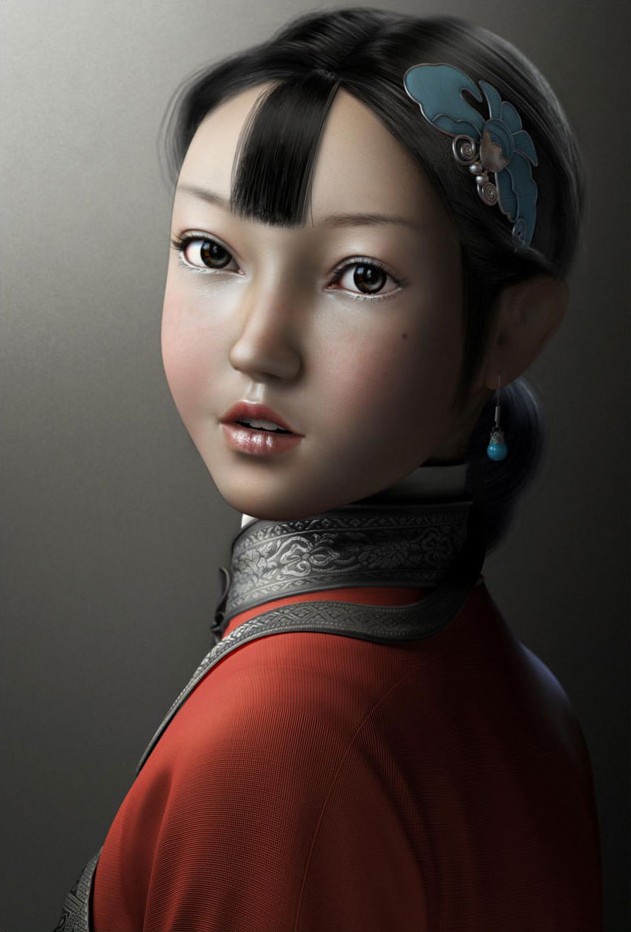 I hope this "Making Of" will be useful to some of you!

Thank you very much!