Making Of 'Bridge to Avalon' 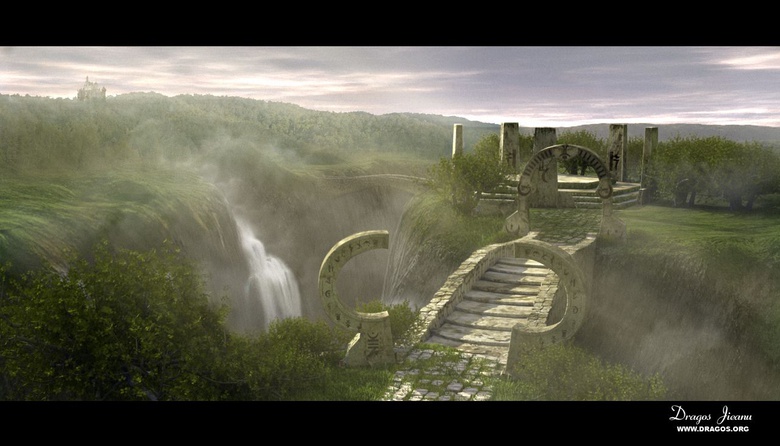 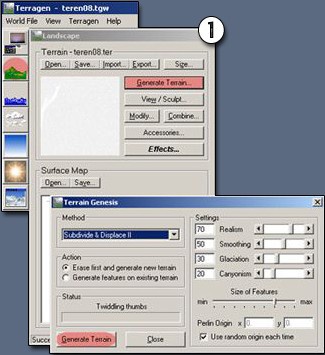 This is just one of those "countless hours of lost sleep" projects. I'll give you some details as of what were the methods used in this project. First of all I scouted the net scouring some nice juicy subject to portrait in one still and I ended up with the idea of doing a lost civilisation type of image, kind-of a Stargate meets Stonehenge thing :)

Right! Next I did some conceptual sketches (unfortunately I have no scanner here so I couldn't scan them) and after that got into looking for reference pictures for my landscape. As I couldn't find something to really like I looked into Terragen, a very simple piece of software but with an amazing creation freedom.

After about 2 days I succeded in constructing my environment.

Here are some screenshots. I'll comment them loosely. First of all I created the terrain and then I modified it in the SCULPT
window.

With the help of the Canyonize thingy the terrain gets more abrupt and rockier.

As I wasn't satisfied with the surface maps I decided to do 3 renders with different materials I can combine in post: grass, gravel and foliage.

Terragen is a freeware software for which you can find countless textures, plugins and surface-maps. 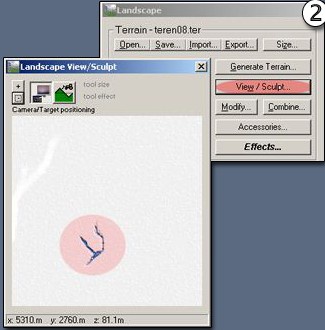 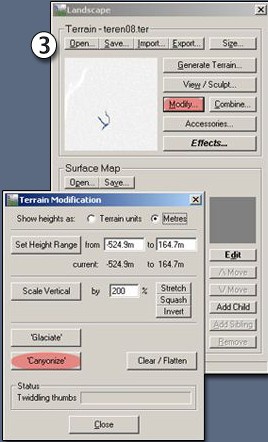 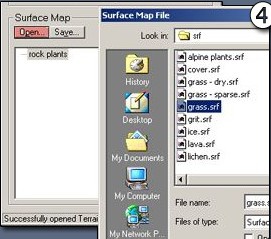 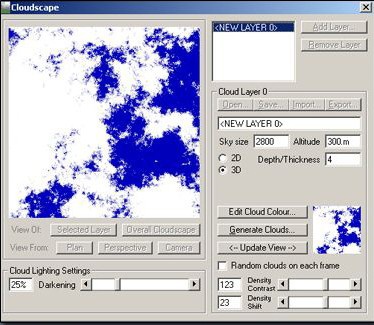 The clouds were a bit trickier to set-up. For this purpose I used the low-quality preview. The clouds take quite some time to render so that's why lo-res images are used for previewing. For the final image and hi-quality I checked 3D clouds and the render time tripled. Once I set-up the cloudscape the next step ins configuring the atmosphere.

In this case I used some predefined setting that came with Terragen as I was too excited to fiddle with the settings as I was about to get in Max and start working there. I chose the Standard_average preset. 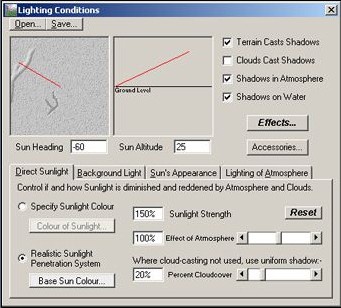 With the atmospheric conditions set, the lighting gets intresting. I chose 25 Sun altitude as a strong light would have diminished the scene realism, seeing I wanted something a bit mistical. 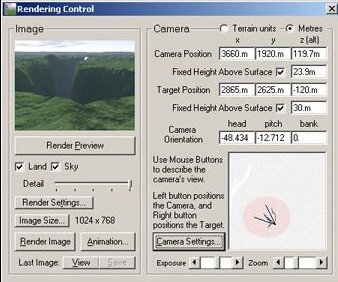 The camera position it's a breeze to set-up from the Rendering Control Panel of from the Modifier/Sculpt menu where you can see it bigger.

The final render should have all the quality parameters set to their maximum values.

To my dismay Terragen un-licensed version doesn't allow image-sizes bigger then 1280(As I was using it for non-commercial work it wasn't licensed).

Here are the 3 renders composited in Photoshop.

The clouds were also rendered in a separate pass for an easier compositing. 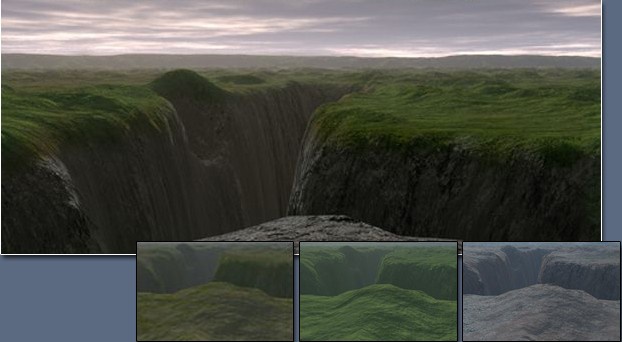 The most intresting part of the project was modelling and integrating the additional elements in the terragen created image.
Â
As I haven't discovered any "export to max"-plugin I modeled the front rocks by hand (detailing only in those areas that were going to be under the objects). I applied a Matte Shadow material and in the VRay Menu (Oops I forgot, the scene was rendered using the VRay renderer) under System/Object settings I selected all the terrain objects and Checked "Matte object, Cast shadows, receive shadows and affect alpha".

Now the light set-up was tested with a sphere. I applied a white material and created a Direct Light to cast shadows that match the Terragen scene. The light color can be easily noticed on a white material, so that's why I chose white for the sphere material. The shadows needed to be softer, but render times would have increased a lot so I decided to leave them Like this.

After that I started detailing the focus zones.

The front rock was covered with a plane with a grass texture. After that I applied a VRayDisplacementMod modifier to it (explained in detail in my "Grass" tutorial soon to be found here on 3D Total) to get a decent grass without much hassle.
Â
The cobble stones are absolutelly necesary for the scene realism. At first I wanted to make a road but settled with just the cobblestone in the end. Pretty boring cloning all the rocks but it was all worth while :). Took care also to apply a noise modifier to them with a different seed so no two stones are identical. 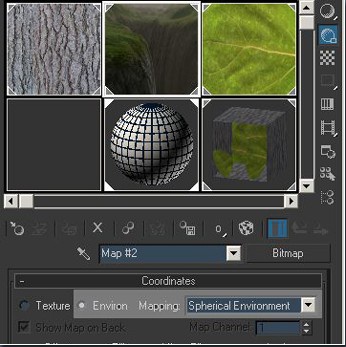 For the GI environment I selected the backdrop image and I mapped it on the enviroment. Simple spherical environment that is. This is how I do things most of the time when a HDRI of the scene is not available

Btw, I was too lazy to mess with the HDRI export option from Terragen but I hear it's pretty good.
Â
After having some concepts for the objects, modeling got a hell of a lot easier.

Well, that was not the case with texturing (I usually don't use UVW Unwrapp unless if it's absolutely necessary. I try to keep things basic with a UVW Mapping, box mapping most of the time. But in this case I had to preciselly position the markings so that was not a viable option.

The geometry is also pretty simple, being a keen follower of the saying "what's not in the frame, can't be seen"

The bump and diffuse maps were done in Photoshop by using maps found on the net.

I unwrapped the model and by using the simple "print-screen, paste in photoshop method" I created the textures (I know Texporter was a much better sollution but hey... that's... MY WAY :))

The markings are just fonts I got from www.alienfonts.com , thanx Azra for the tip :) I would have had to make them by hand otherwise. 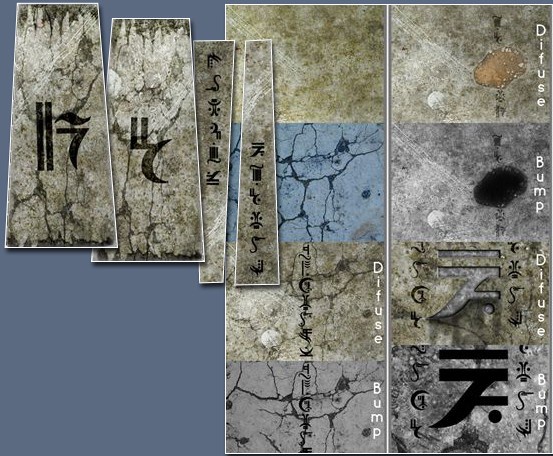 The new Max 6 version has some sort of a Tree generator coming as a standard package. It really saved me from a lot of trouble. The trees are parametric and come in different shapes and sizes: from oakes to bushes.

Modeling the objects in the background is nothing more then making a number of splines and applying a bevel modifier(using a simple extrude would have left me with objects with sharp edges which would have diminished the realism of the scene). I wanted to add some wear and tear to them, small cracks, deffects etc, but given the fact that they were background objects lazyness won and I quit ;)

Getting back to texturing the trees, I modified the default material using some leaves textures and bark. Again, using SSS would have tripled the rendertimes and it would have been pointless as my intention was to do a paintover in photoshop.

The problem I run into every time I use VRay displacement is that it darkens my object a lot and I end up having to crank up the lights to lighten the object but make sure it doesn't burn-out the rest of my objects... 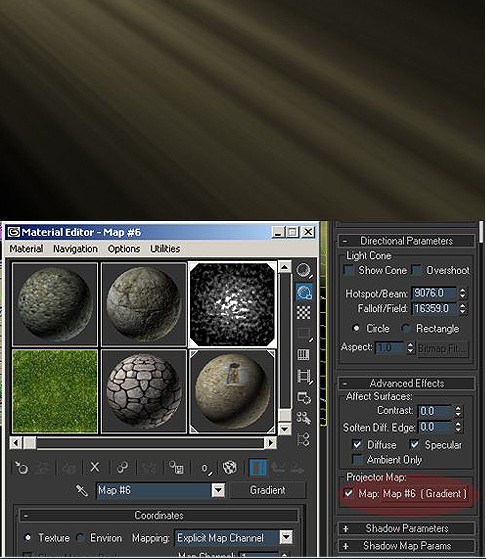 The volumetric light is pretty straight-forward if you render it with scanline. The trick with VRay is that the volumetric light doesn't cast any shadows so you must fool the eye a little. For this purpose I created a gradient map(circular one) and gave it a strong noise like in the image to the left.

I cloned that light and really turned it's intensity down. After that I just use that gradient map in the Advanced Effects/Projector map, and after turning on Volume light in the Enviroment panel I selected the second light as it will be the one that's gonna be used for the volume light effect.

The volumetric light was rendered in a different pass and composited in Photoshop with a Soft Light layer transffer.

The final composition. Here are some main steps: first the atmosphere, fog, volumetric lights, the cascade and steam.

The next step was introducing some elements to fill in the blanks and balance the composition: a forrest that was the result of a number of reference photos put together. I just color corrected it and fit it there. I also felt the need to have a building of some sort in the background to give some meaning to the whole picture (if not I would have had a whole lot of questions like: Ok... so where does that bridge lead??? PS. To Avalon right? :D

I attached the textures used for the smoke and waterfall generated in particle illusion (really helpful or else I would have had to find real photos and mask them - Particle illusion exports alpha channel.) 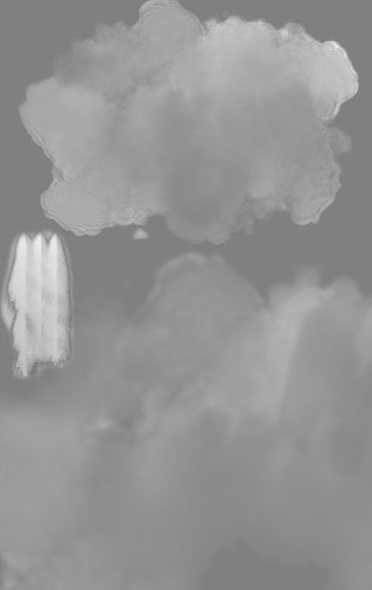 In the end I rendered out two different light setups in Max, one lighter and one darker which I composed in Photoshop using my artistic sixth sense :)

The final touch-ups consisted in putting some emphasis on the depth effect (fog, progressive desaturation, low contrast farther from the camera, etc) and adding some contrat to the sky where I felt it needed some help and that about wraps it up :)

Many thanx to Azra for his translation and supporting me ;)