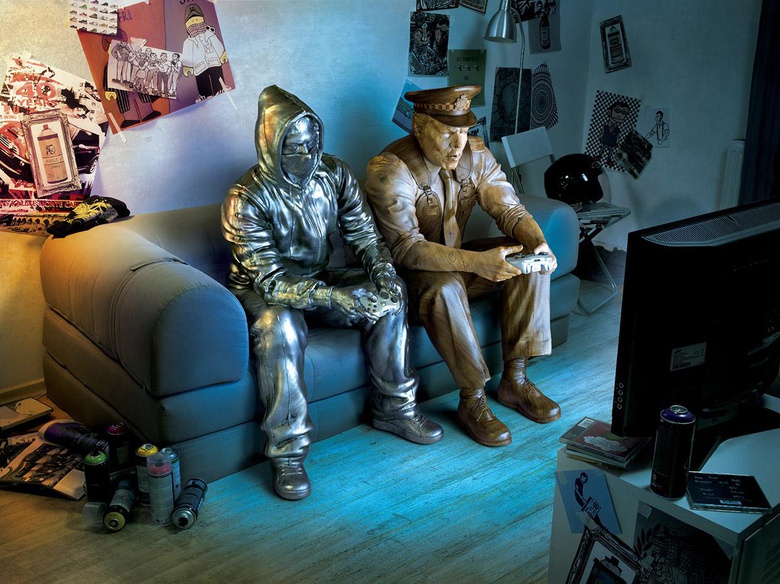 Hello, my name is Moumene Sofian and I'm Lead 3D Artist at Carioca Studio (www.carioca.ro). I'm happy to guide you through the creation process of one of our studio pieces, made for the DDB South-Africa agency and for the client Bostik. Before I start with the walkthrough I want you to know that this was a two-visual campaign and the second visual can be seen in Fig.01. 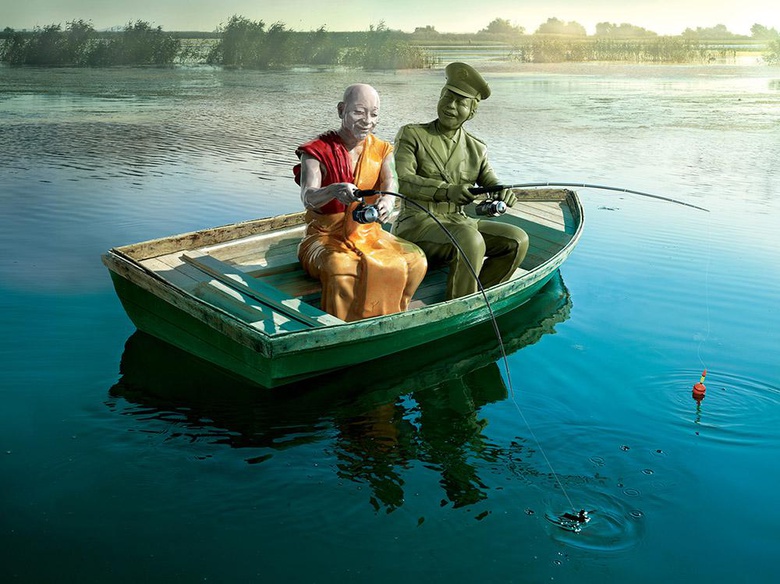 The brief came from the agency and after a discussion with them we started the work. First we did a casting to choose the right characters and we searched for a good location. After this we prepared the space to look like a teenager's room and then we dressed up the characters (Fig.02). 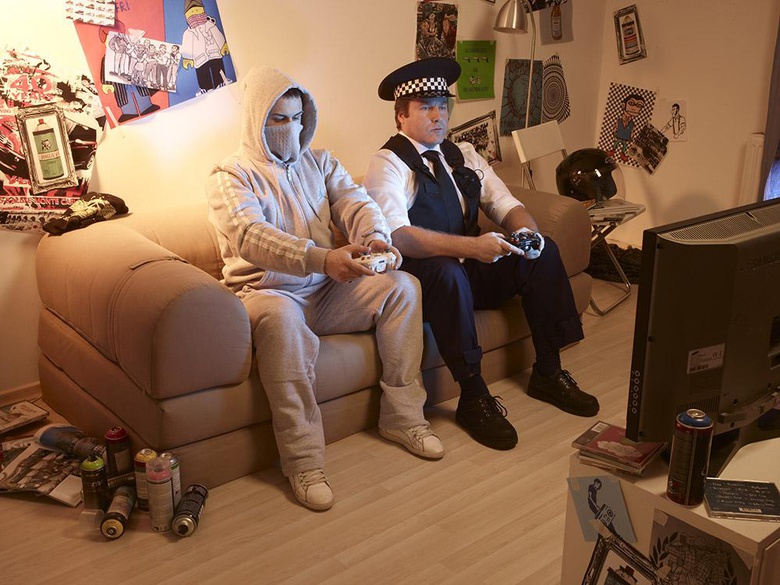 The concept of the whole Bostik campaign was that there are some materials that are hard to glue, such as metal and wood, and that's as hard as getting a hooligan and a British policeman in the same room playing a videogame and bonding - but Bostik can easily do it. The slogan was: "All-material adhesive. For stronger bonds." So we have two main characters: the hooligan and the British police officer. We took some photographs from different angles and then chose the best one (Fig.03). 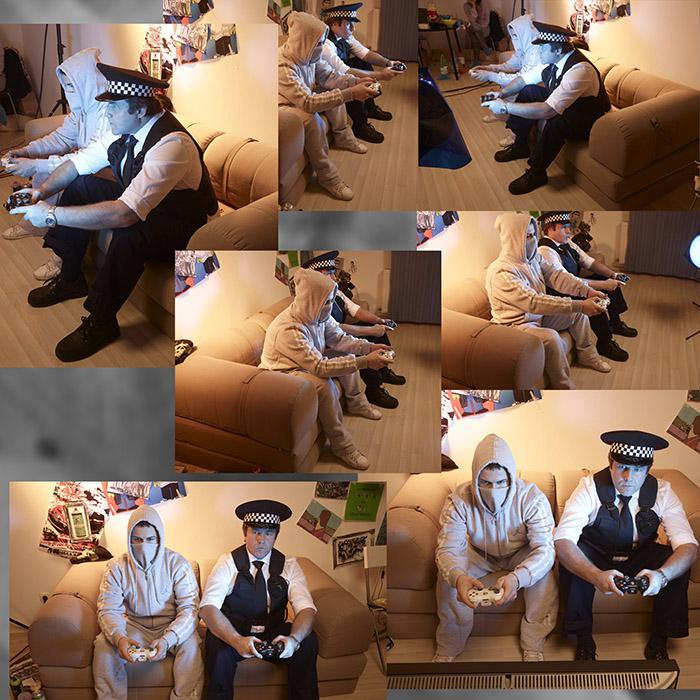 In the meantime we were looking for good real references for the police officer's hat, and rubber and wood materials, because rubber was the first choice for the hooligan and wood for the policeman. But after some tests we quickly realized that rubber was a dull material and there was nothing spectacular about it, so we changed the hooligan to metal (Fig.04). 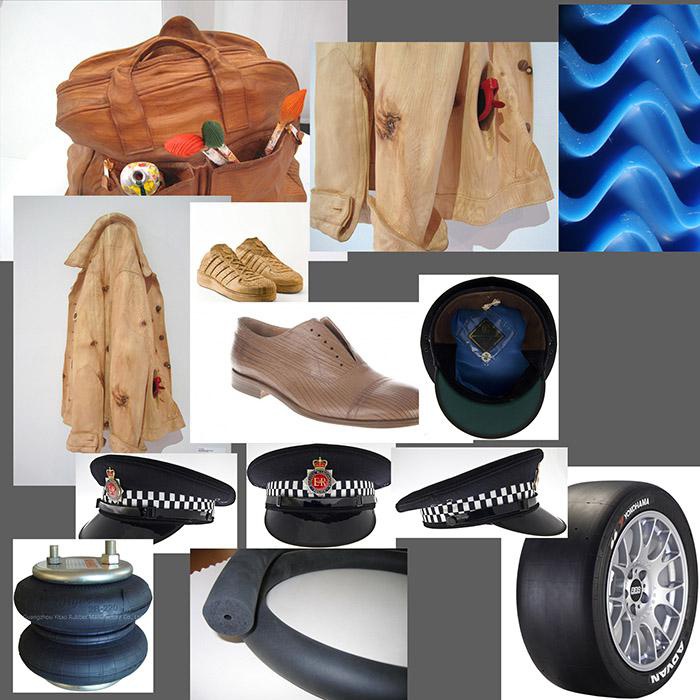 Our 3D software programs of choice were ZBrush and 3ds Max. The first thing I did after gathering the reference materials was start blocking out a rough CG interior based on the picture. I adjusted to the same focal length as the photo and started to put in some walls, and the rough shape of the couch in order to get more realism with the shadows cast by and on the objects (Fig.05). 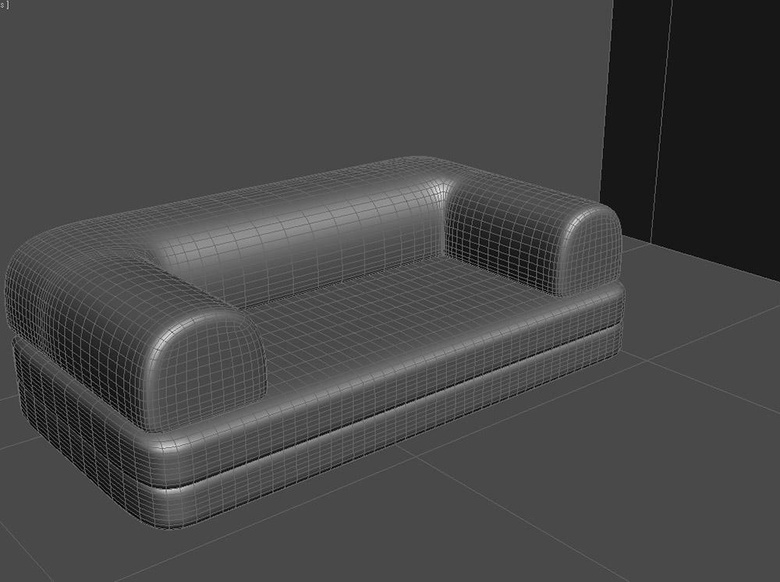 Then we started sculpting the characters in ZBrush, starting with the default character who we tweaked in 3ds Max to fit our needs. The great challenge was to get as close to the reference characters as possible. We concentrated on the face (the main feature of the character) and the hands because they were the only visible parts of the body. The parts that were covered by clothes were minimally sculpted in order to save some time. I just used the Standard and Pinch brushes; there was nothing fancy here (Fig.06). 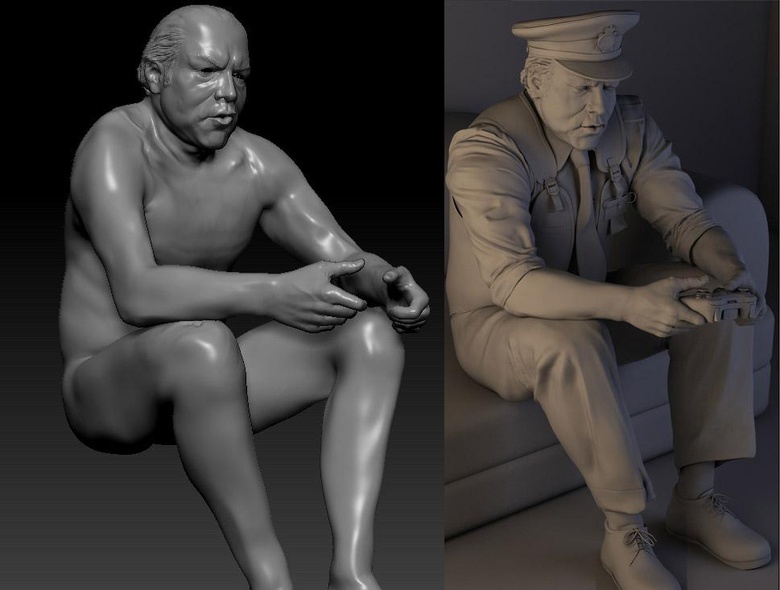 After we finished the character we started modeling the clothing (Fig.07). I searched for some good references for the police officer hat because the one from our photos wasn't exactly a real British police hat. 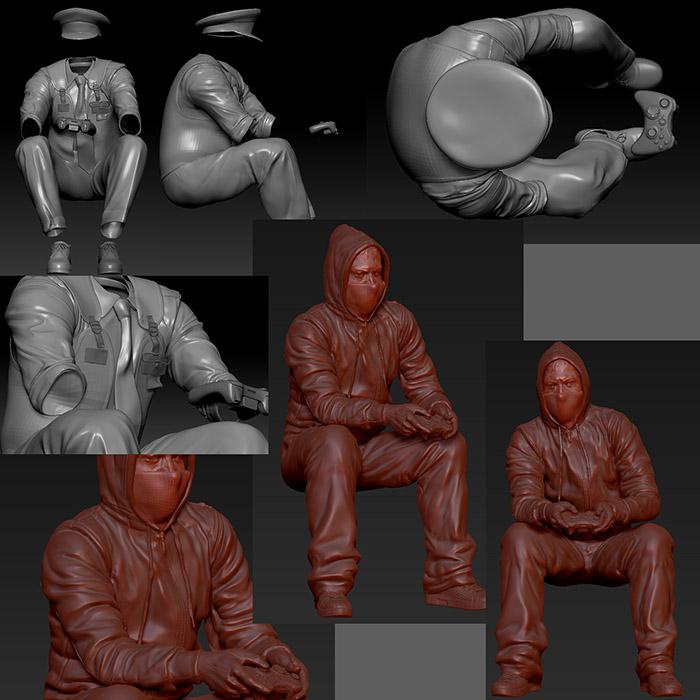 After the modeling process I had to light the scene in order to do a proper materials test. The light wasn't anything too fancy; I just tried to mimic the lightning from the photographs as closely as possible. I had three V-Ray light sources: the warm yellowish room light, the cold blueish TV light and a V-Ray dome light with an interior HDRi for reflections only (Fig.08). 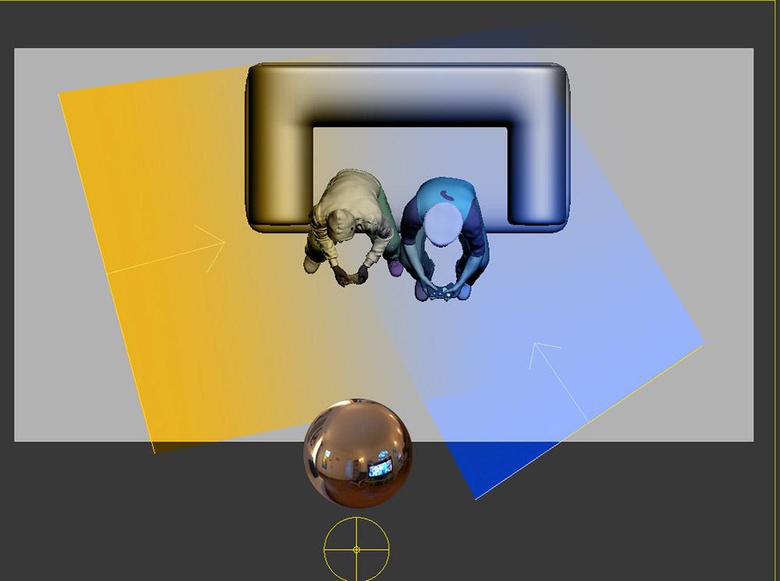 As I said, I began making some tests with a rubber material for the hooligan (Fig.09), but we didn't like how it combined with the wood. Also in the second visual there was a Chinese police officer made of plastic and they would have resembled each other too much, so we chose metal instead (Fig.10). Here, in my opinion, was the challenging part of the process: trying to get the materials right. I did lots of tests until I was happy with the result. 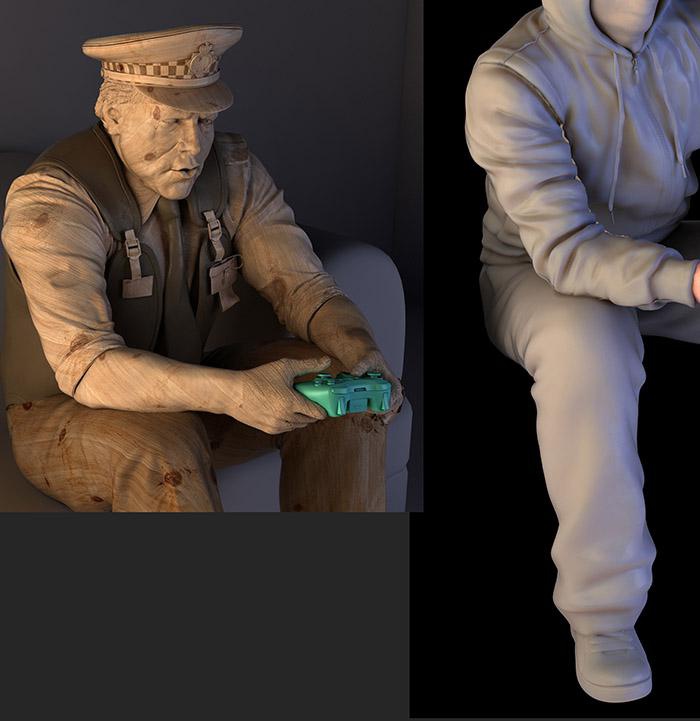 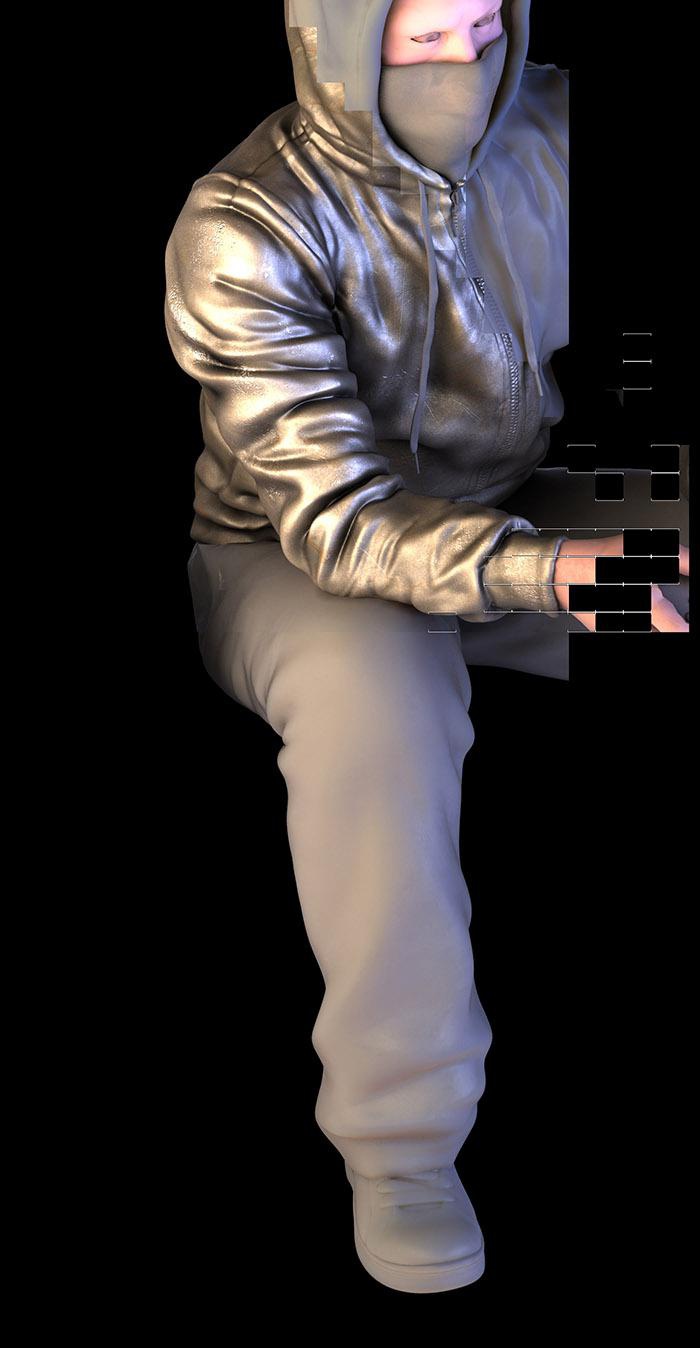 The UVs and material samples can be seen in Fig.11. 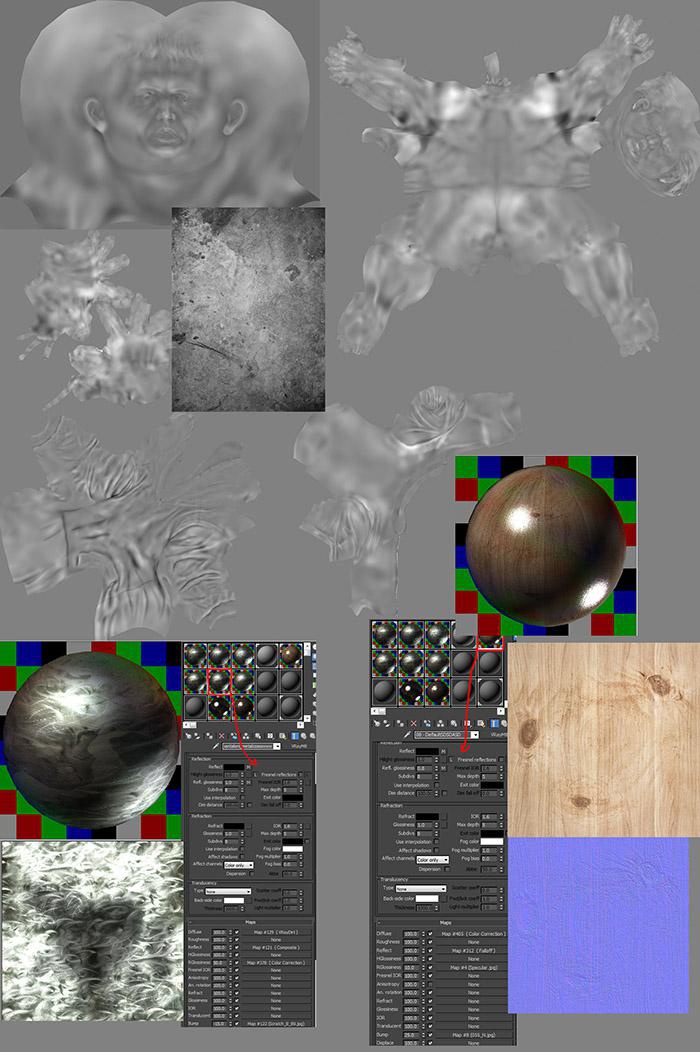 The wood material was fairly simple regarding the shader tree, but with the metal material I had to work a little bit more until I got the result I wanted. I added contrast to the displacement maps from ZBrush and used them as masks to get a cool variation of the different metal shaders (Fig.12). 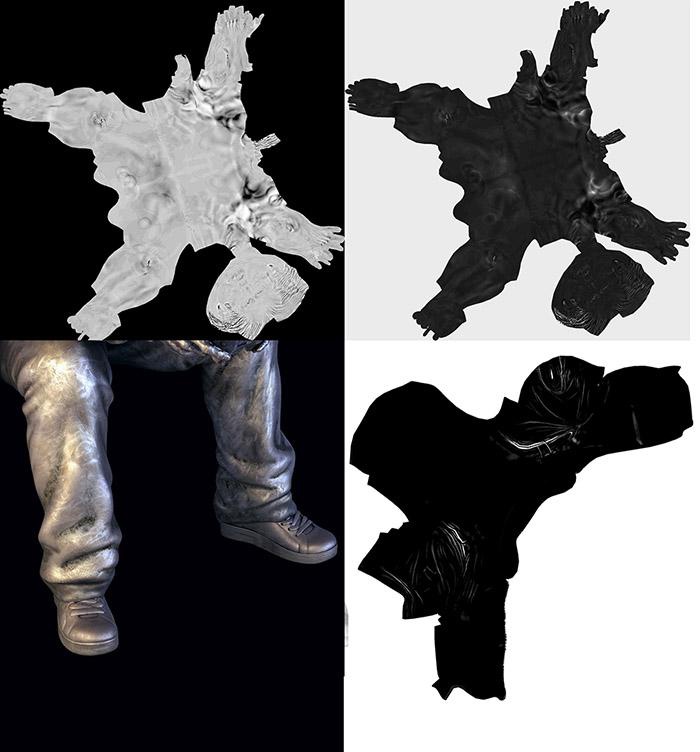 The render settings were very basic (Fig.13). The final render was at 7000 x 5000 pixels. We usually use high resolutions because the final delivered product must fit on a wide range of print sizes. 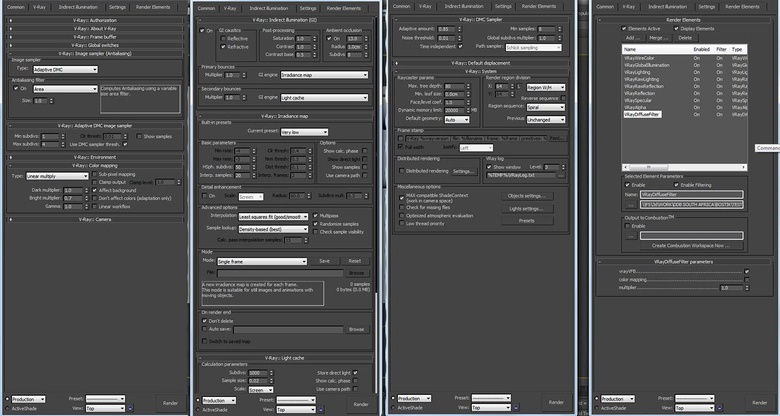 Post-production was done in Photoshop, where the characters were even better integrated into the ambient and it was mainly about color correction (Fig.14).

It was fun working on this project and it was a good opportunity to exercise shaders and integrate photography. If you have questions or suggestions just email me at: sofian.moumene@gmail.com