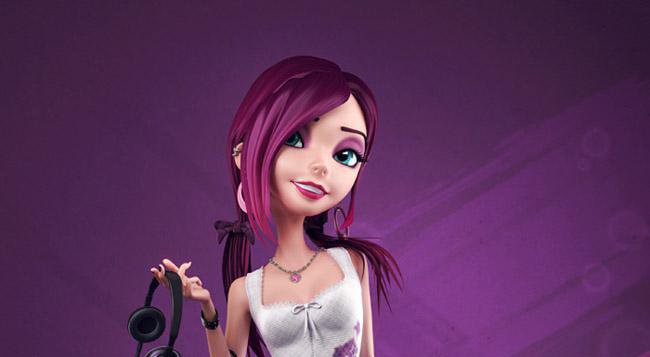 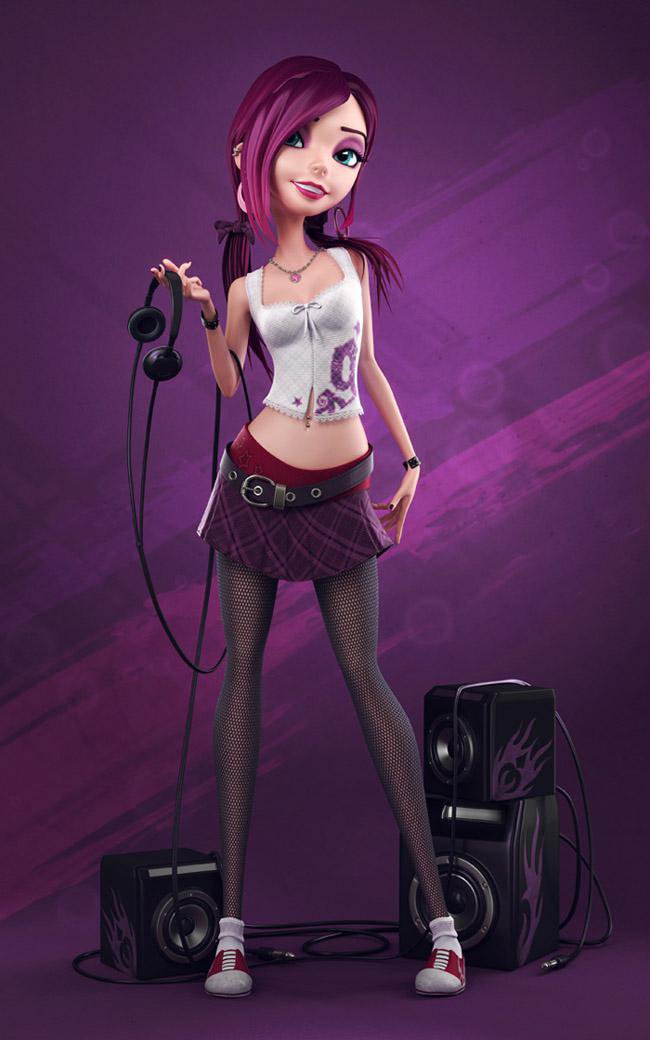 This image started as part of a freelance job that required still images of some girls and guys in different outfits for different environments.

Once the job was completed, and since I wasn't satisfied with the light, materials and textures in the project due the tight schedule I had, I decided to rework all of it and in some cases re-do some clothing from scratch. I love pin-up art and cartoons, so it was a good opportunity to create a new series.

Instead of wasting time cleaning old models I modeled a whole new character from scratch, keeping the cartoony proportions such as the big head, thin and long legs and big eyes. The main point was to get a cute cartoony yet sexy girl. Regarding heads/faces I usually start from a plane and keep extruding edges to get the main poly flow structure and a decent dense mesh suitable for different facial expressions (Fig.01). 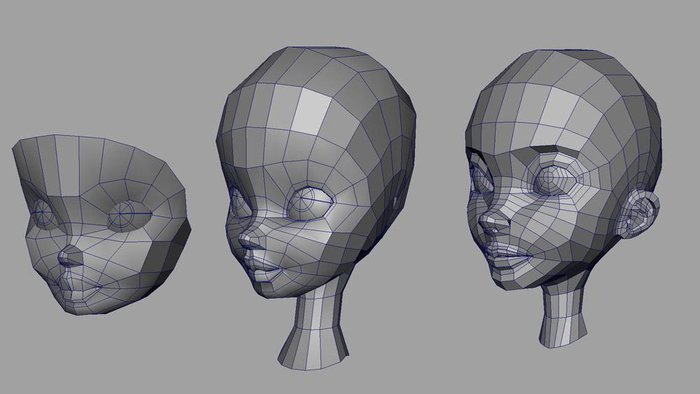 The torso, arms and legs were modeled from a cylinder, blocking the main volumes and then adding more geometry to work with to define specific areas such as the shoulders, neck, elbows, knees etc (Fig.02 - 04). 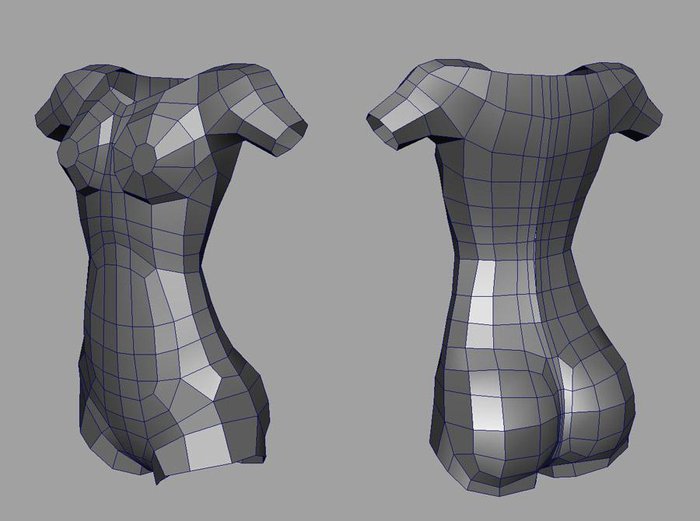 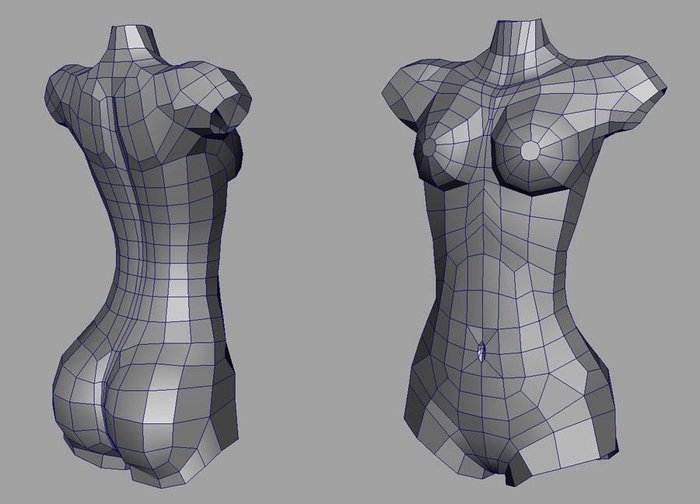 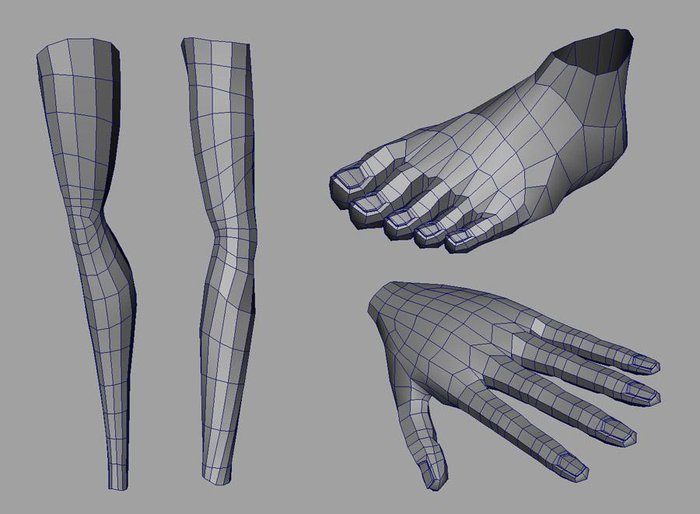 The strands of hair were modeled entirely from a plane. Once I have the basic shape I use tools like the Insert Edge Loop and Transform to create and move the new geometry along its normal's and simulate rough hair fibers (Fig.05 - 07). 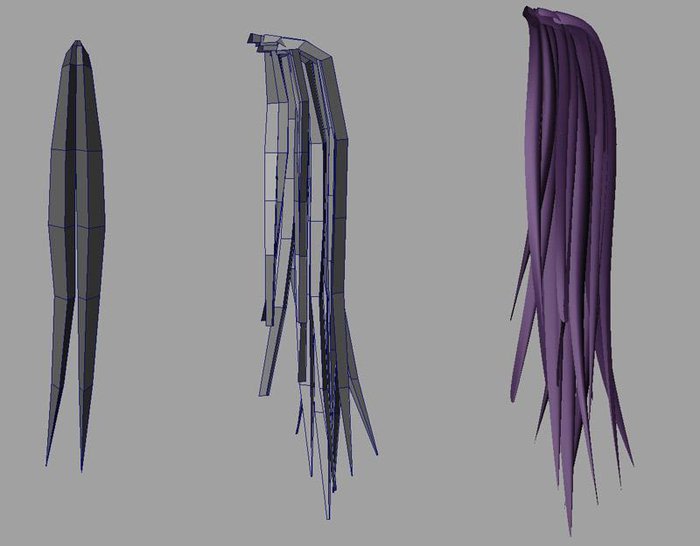 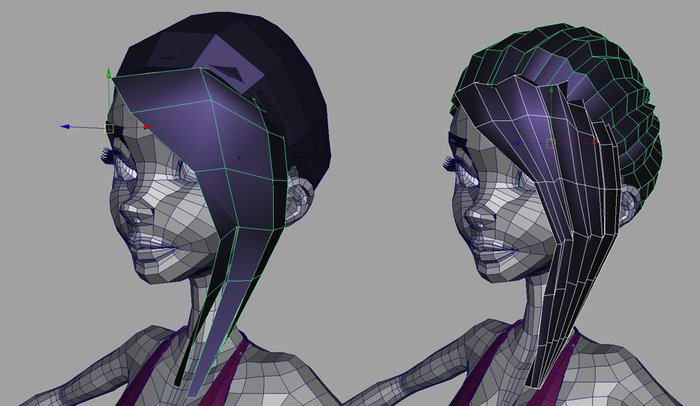 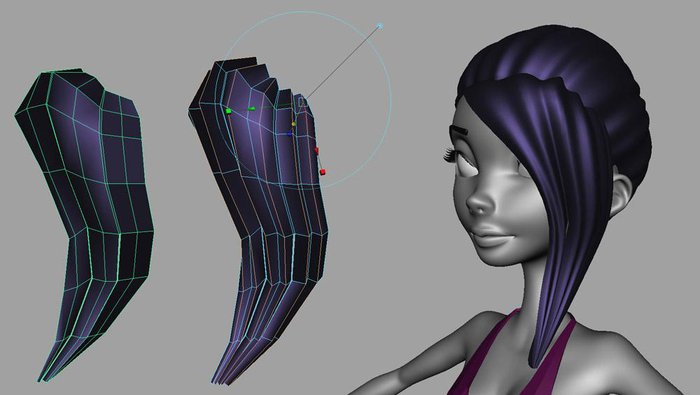 If I need adjustments I use the Smooth Selection from Maya, which is a great and fast way to tweak dense geometry. The cloth was modeled by extracting the geometry from the body mesh and then extruding the border edges covering the torso to finish the piece (Fig.08).

The skirt was much easier and the folds were created using Bevel and Extrude (Fig.09).

To complete the scene, I modeled some props to match the theme of the image. These were some speakers, a set of headphones and some wires (Fig.10 - 12). 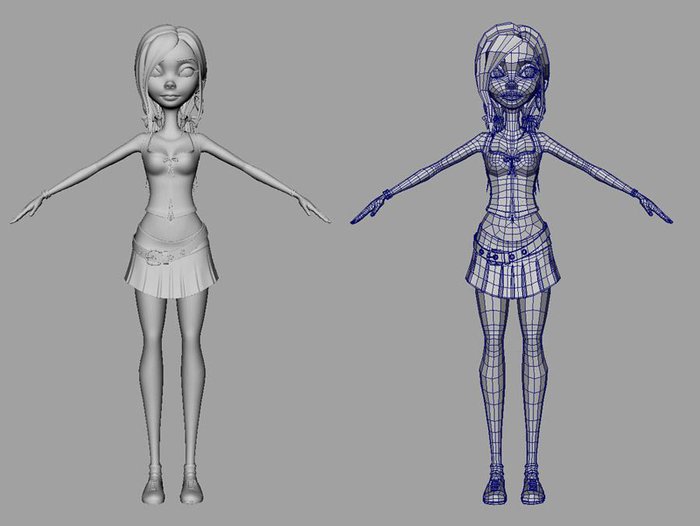 All the textures were created inside Photoshop. The texture for the girl was pretty simple; after all, I wasn't looking for realistic skin. I painted warm tones using the help of a previously baked Occlusion map.

I used the Miss Fast Skin material with some hand-painted maps to control the scattering layers. The final material doesn't have any special settings; it was only a matter of tweaking the values until I had the desired look (Fig.13 - 14). 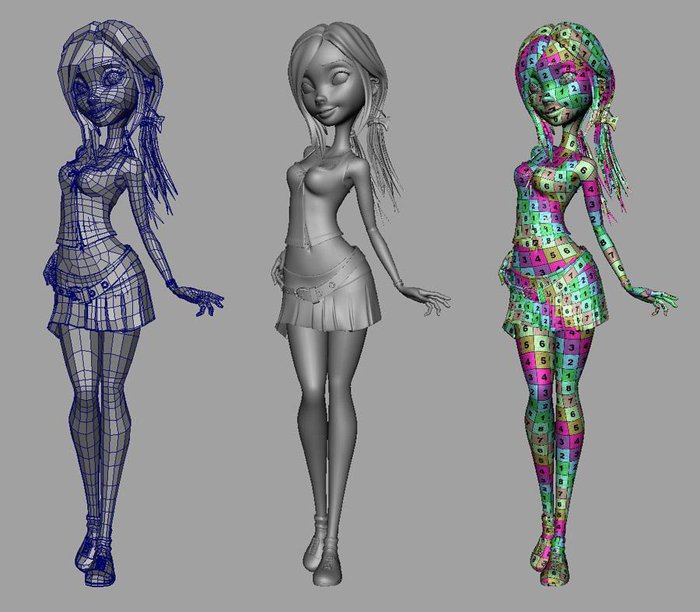 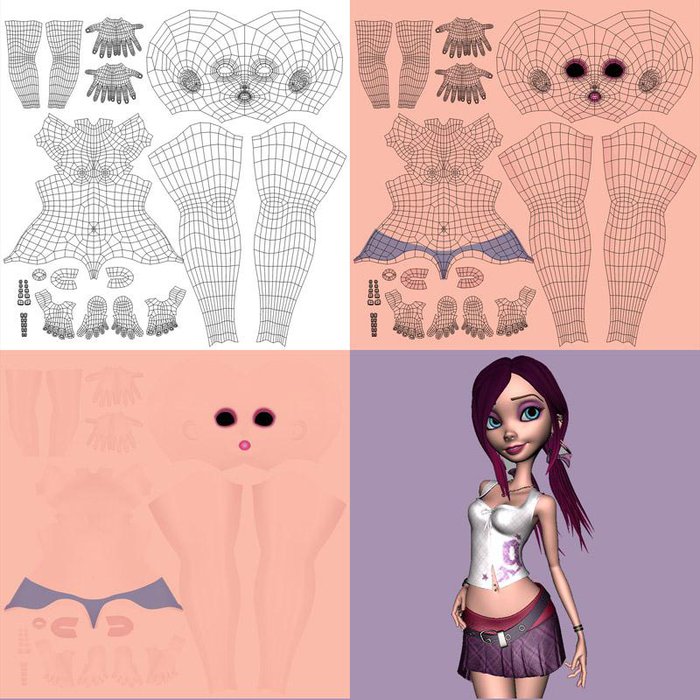 The clothing was created using some fabric textures as a base and then desired colors and details such as stitches, stamps and patterns were hand-painted after (Fig.15). 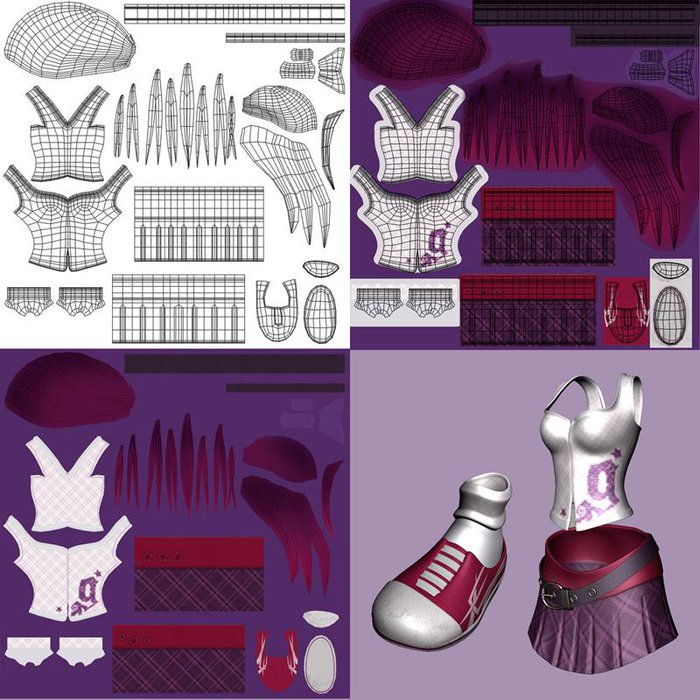 The hair uses a few hand-painted strokes to create more variation in the coloring, and uses an anisotropic Maya material.

I used a basic skeleton on the model to create different poses. Since it was just for a still image there was no need for complex controls and a few basic blend shapes did the trick (Fig.16). 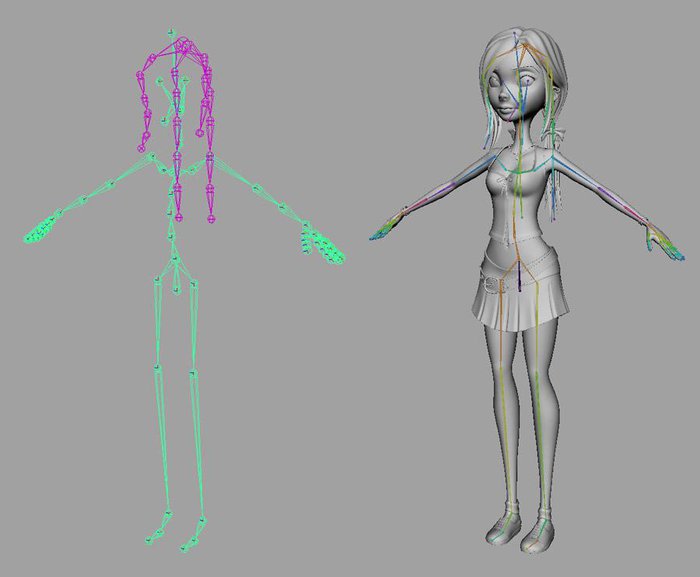 The default binding gave me good enough results on the deforming mesh. I did some minor adjustments on the elbows and knees.

As for posing the character, the great thing about the elegance and aesthetic of the female form is that it has an enormous range of expressions and you can get tons of different poses and keep a nice looking silhouette (Fig.17). 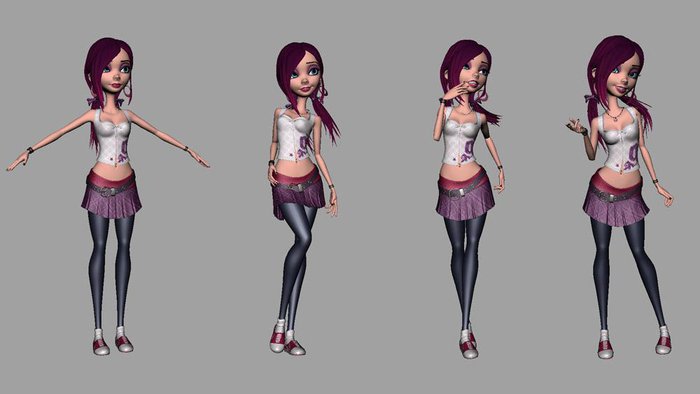 I didn't want anything too extreme though, so for the final image I went for a simpler pose that showed the character's attitude: cute, rebellious and playful (Fig.18). 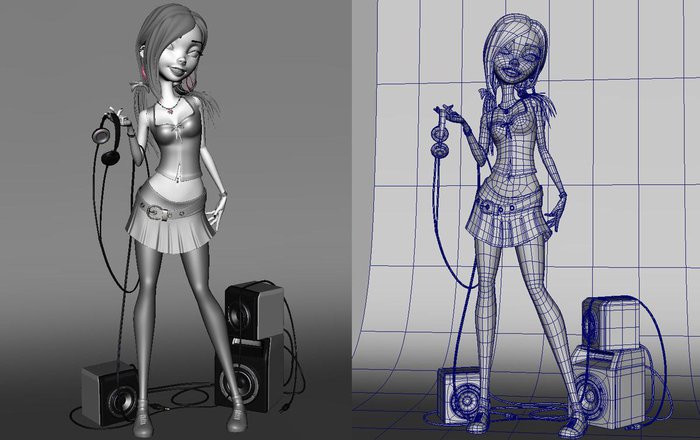 I wanted to recreate a real fashion photo shoot light setup, so after some quick research on the internet, I analyzed some great pictures and found a nice setup that enhanced the subject's silhouette. I arranged four Area Lights around the model (Fig.19 - 20), one main light (Fig.21), a fill light (Fig.22) and two more pointing towards the back of the model (Fig.23) creating a nice rim light. 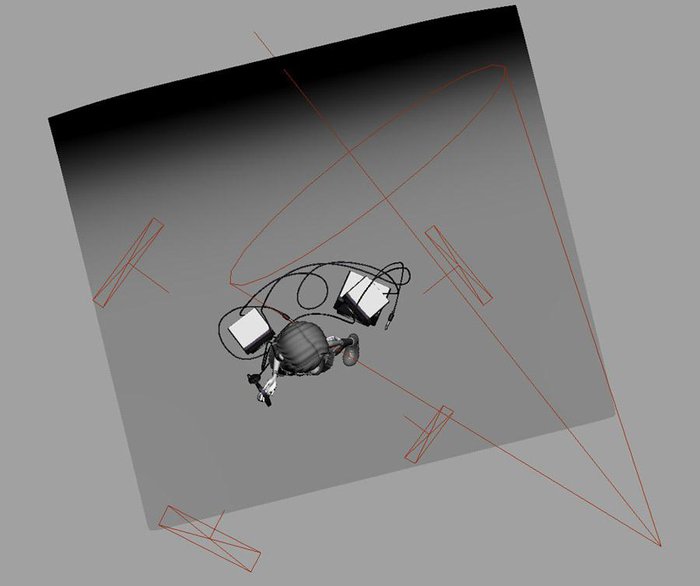 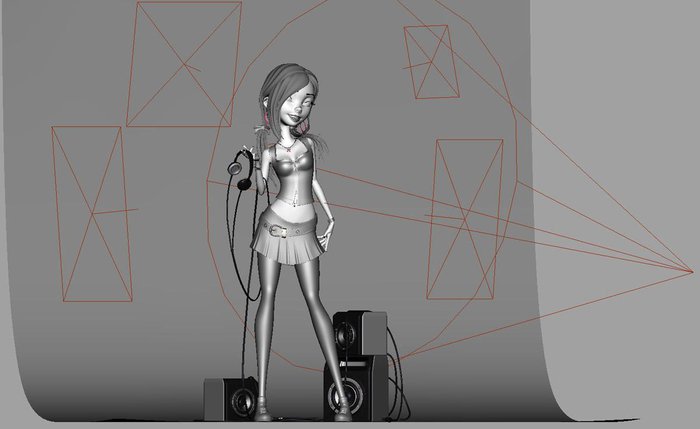 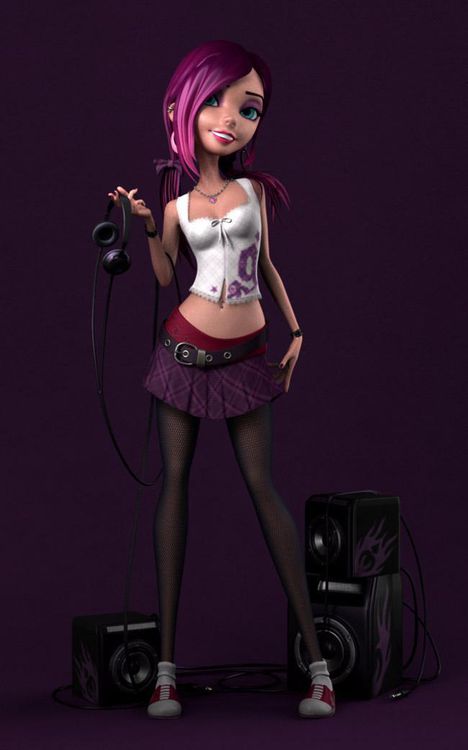 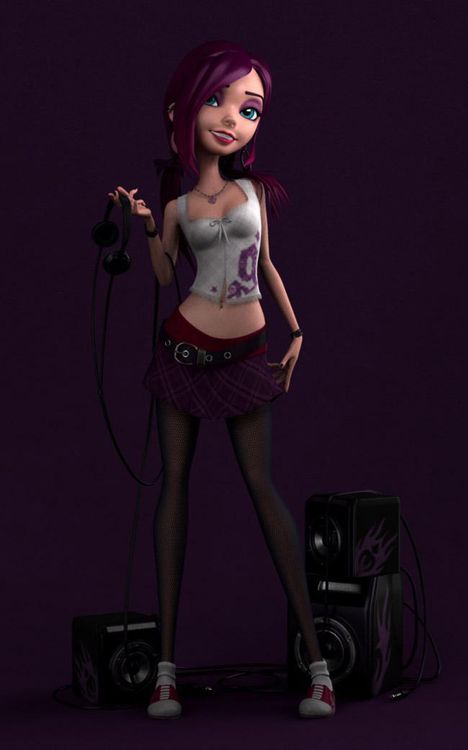 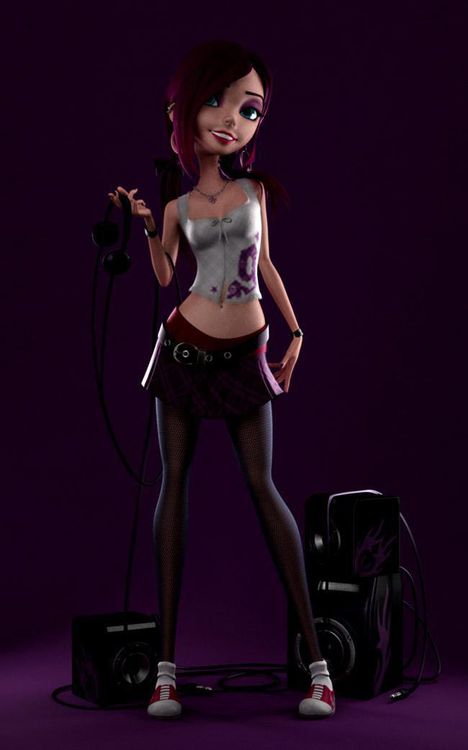 I used a Spot light pointing to the background (Fig.24), which consisted of a blended plane to avoid any noticeable horizon in the scene. I had to add some light to integrate everything and prevent some of the props getting more attention than the model itself (Fig.25). 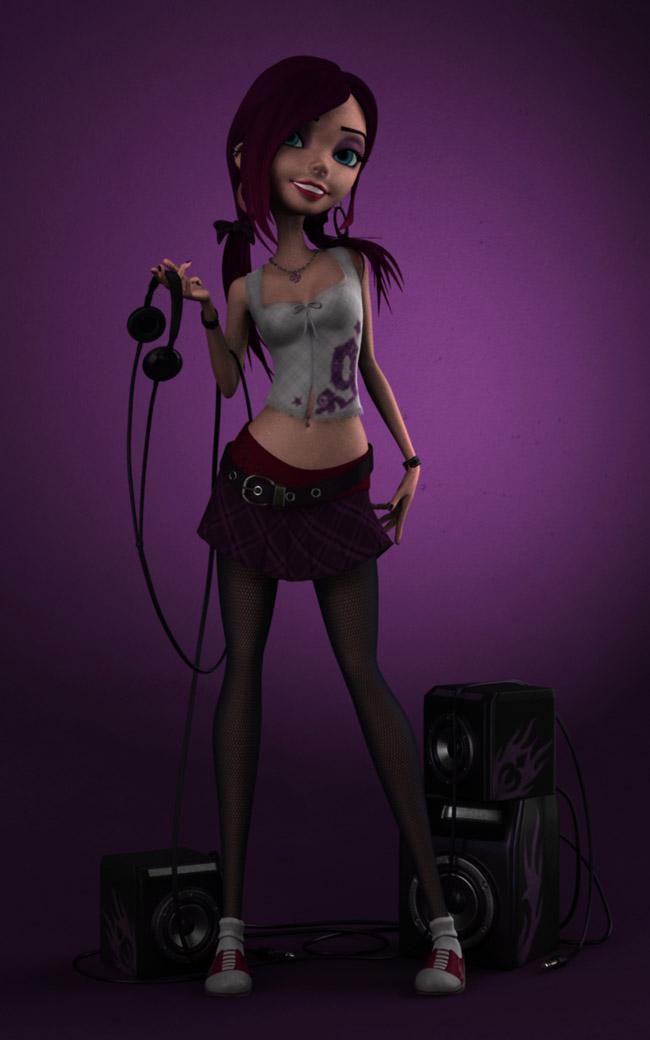 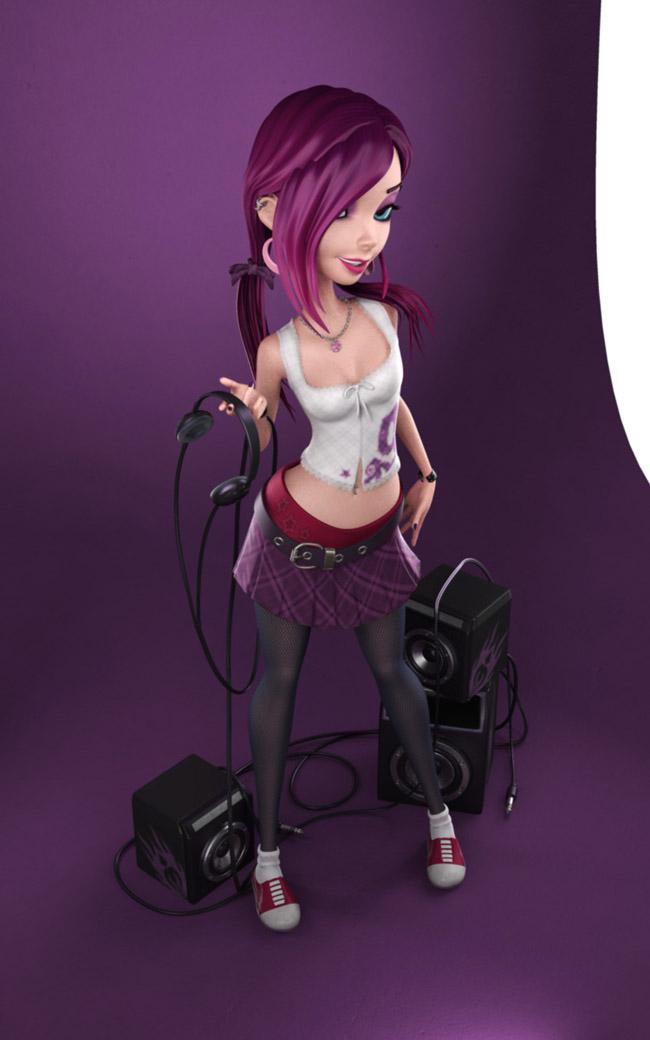 I rendered the scene in mental ray using the mia_exposure_simple node with Final Gather on. The final output was 3200 x 5200px.

I tried to get almost everything right in one single render - no compositing or Render Layers - so the only post-production I did for this image was to add some of the graphics in the background and a small curves adjustment in Photoshop (Fig.26 - 27). 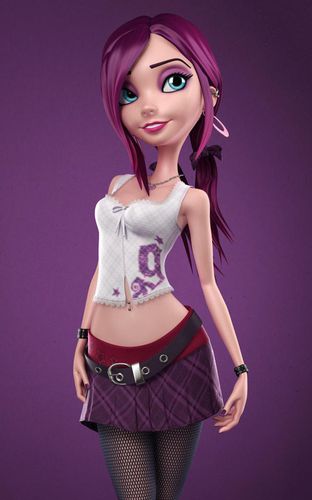 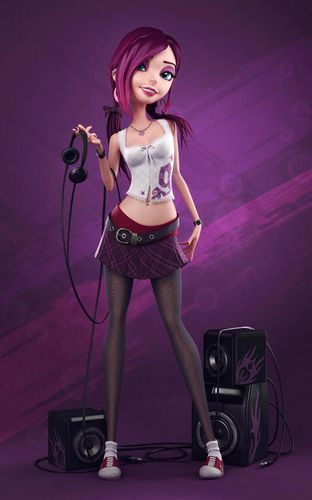 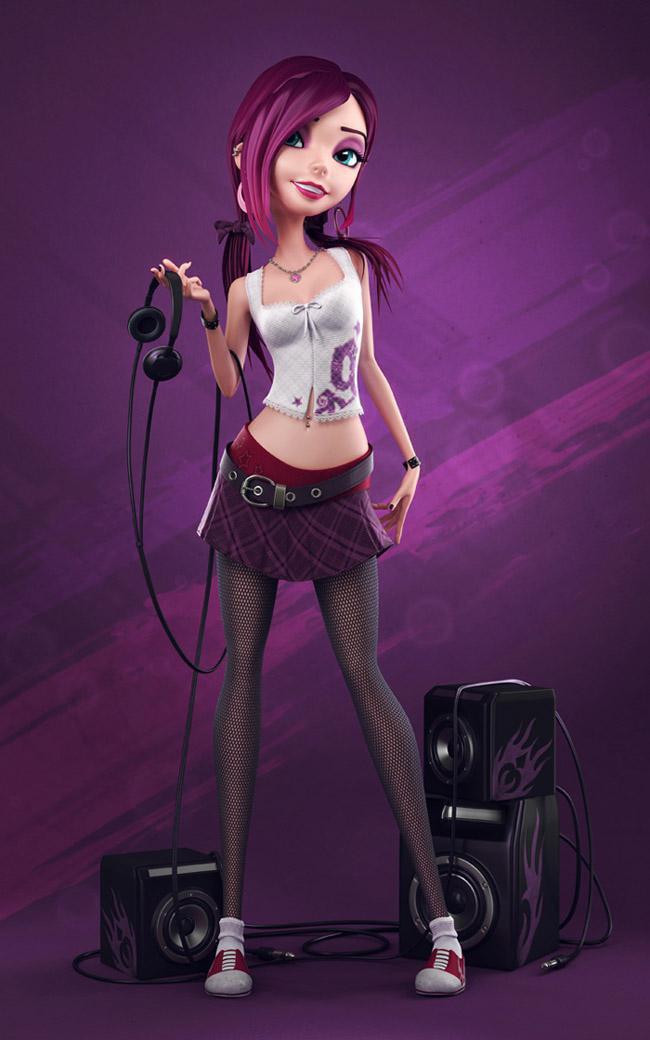 I enjoyed working with this character a lot, and I even used three base meshes for nine different characters, all with small changes in poses and clothing creating new solid pieces.

I was pretty satisfied with the result. Thanks for reading and thanks to 3dtotal for the huge support they give to artists!