The deal peoples, LeS back again and welcome to another WPB update. i mentioned last update that I'd go through my process of putting pages together for this crazy story, but other callings demanded for that unnecessarily cool Triple Gatefold Cover for issue #1 that's been starting all sorts of trouble/buzz in the DW boards before issue 1 dropped. this cover was actually the first pic that was done for the series and was the one (out of various thumbnails of ideas for issue 1) that Pat handpicked to be his favorite. here's how it went down.

This cover took me about 3 days to do, 1) because it was so big, three11x17 pages 2) it was the FIRST time I'd touched 11x17 Bristol board in over 3-4 years (damn i was rusty!) and 3) i needed to get sleep and i'm indecisive sometimes, heh.... so getting it to translate from these thumbs were a challenge in the beginning.

Thumb #1: my initial idea when Adam asked me to do a triple gatefold cover was to approach it in a more graphic sense, not necessarily all out in your face action. but after a couple thumbs even i decided that "these characters are too cool to be on some incognito-design approach" so decided on the classic anime OVA promo adds you'd see in NEW TYPE magazine or ANIMATION mag. This is the first thumb idea i had: 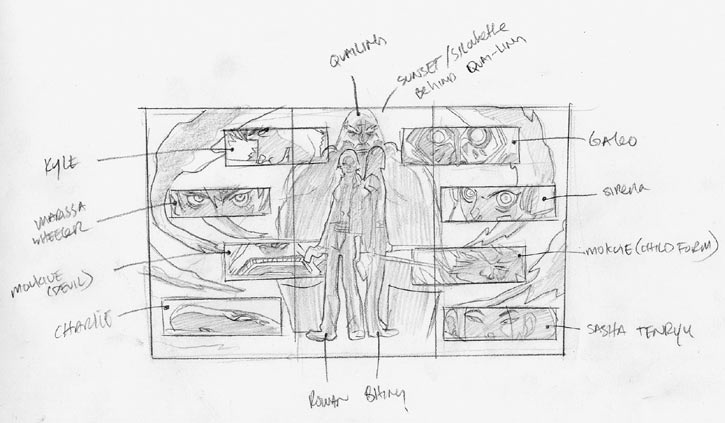 Thumb #2: after seeing that, i decided to give it another approach, more along those OVA lines of approaching an epic new series. this one was just a I'll cluttered to me though, i felt i needed to pull back so we can see the characters more: 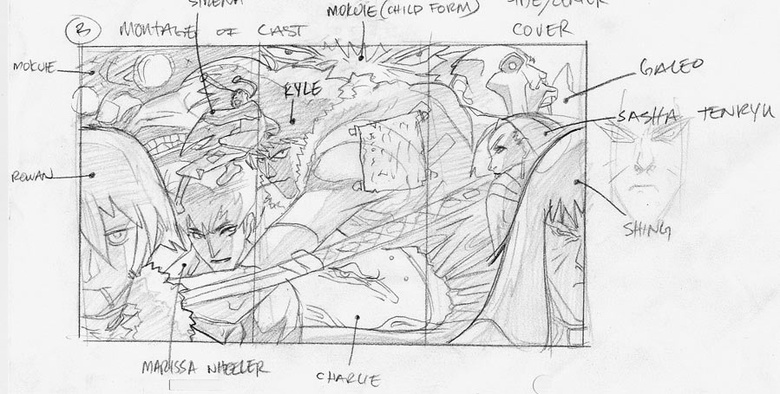 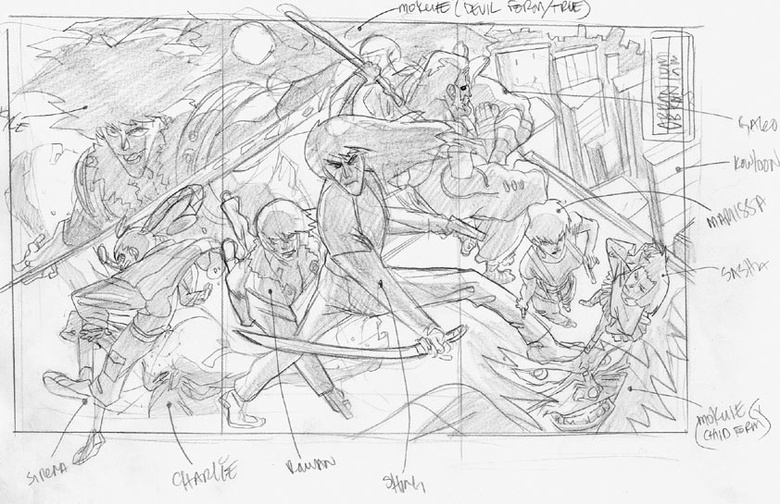 Thumb #3: Look familiar? you damned right it does, ha! this was the pic that Pat loved. I kinda liked it too, the characters all visible, full shots of the cool ones, a nice lil montage of the city, it worked somewhat for me too so we decided to do this one up:

Pencils: this is my process as usual. after I've decided on the thumbs, i enlarge then to 11X17 size and get to workin' molding , shifting and changing things as i go, adding minute details where ever necessary. this was the initial design. but halfway into it, i had issues with Rowan and Shing's poses and their looks. they looked to realistic compared to the other characters and their poses i thought, looked ambiguous. So i phoned Pat like "i wanna change Rowan and Shing's poses" he was like " well i think what you got is dope so far, but if you wanna make it better, go ahead" so i did: 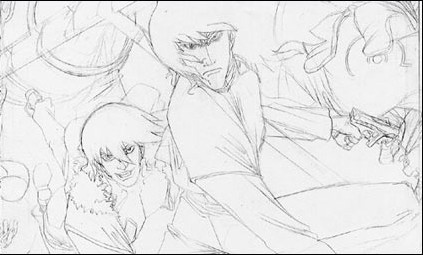 Pencils final: Ahh, better. before i changed their poses, Pat wanted to see what i was talking about, so i did Rowan and Shing's poses separately and sent them over, He flipped" Do these up man! do these up!"so there ya have it. the rest was up to the magicians, Houdini inker Rob Stull and the "Black Merlin"(HA!), Colorist Chris Walker. hehe: 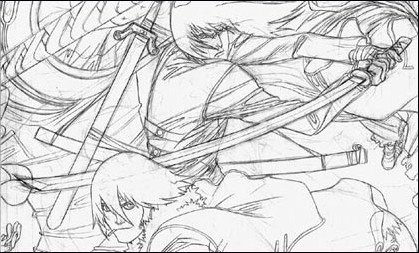 There is a reason why Rob Stull is a veteran inker for the past 15 years. this guy took my pencils and transformed them into something better. i almost didn't recognize my own work after he was done. he added just the amount of "accents" and personality to my lines, it was the perfect set up for Mr. Walker to dig in and go crazy: 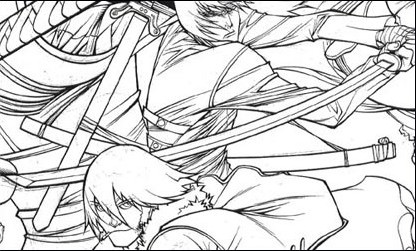 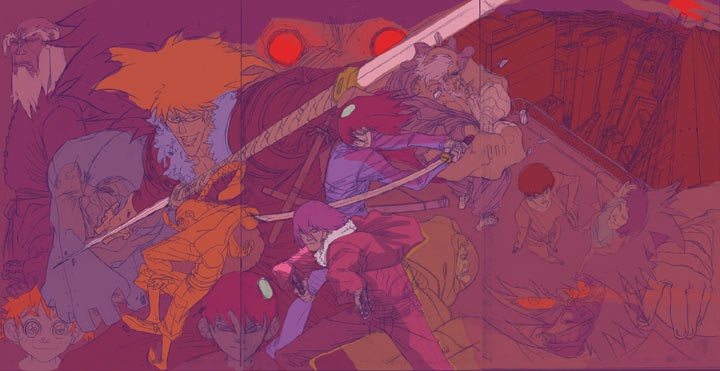 Chris is a nut job. he told me he wanted to do something different for the look of Arkanium. since it's a "dark book" he wanted to do up a feel that would define the series' entire attitude. when he sent me the flats i didn't understand it at all at first. i thought he was using colors i never thought would work together, at least i didn't use (heh me not being a colorist and all who am i tell?). but i was blown away by the finished look.

When he sent me some of the minor details he was adding, i just left him alone. speechless. haha!: 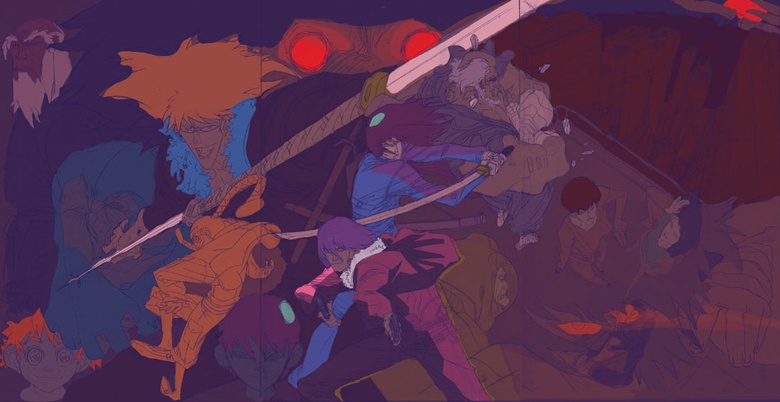 Well, here's our combined efforts. the Triple Gatefold cover in all its glory. It was a real learning experience for me and was a bit of a revelation towards how much fun we'd have and what we were going to be doing in this series at the time. there were actually a bunch of other thumbnail ideas for the triple gatefold cover i didn't show you, i just wanna keep that for the TPBs! heh! anyways, keep the led burnin' and I'll get at you cats next update with new scribbles (FINALLY!) and another step by step addition, to some of my thought process on page layouts from Arkanium issue 1: 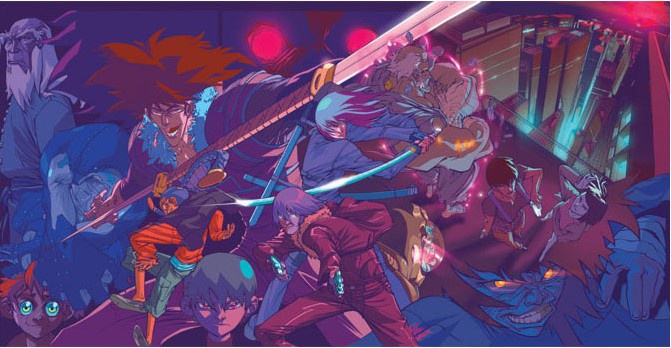