In this making of I will not describe all the passages that brought me from the sketch to the final image. There are many artists better than me that have already described that several times. What I will try to describe is primarily the process that brought me at the composition and colour palette choice. Not all my choices could be easily rationalized but some of these were and I will try to explain them.

The project is clearly inspired by the TV series "Neo Genesis Evangelion". I had a wish and a need to paint something related. I wasn't interested in recreating a particular scene, already seen in an episode or in the movies, I wanted to create a concept that interpreted some of the symbolic elements that fascinated me. I thought a lot about what to paint even before I took a pencil in my hand or opened Photoshop. Without an interesting idea even the best painting remains just a technical exercise. I didn't want to just draw; I also needed the piece to say something. I am fascinated by the idea that different people could read what I have painted in different ways.

I took some decisions about the main elements to represent: the first was the Angel, the second a figure strictly connected to it, and finally the environment in which the action would have taken place. I have started to sketch on paper with a black pen to establish the bases of the composition. After dozens of sketches I started to work with Photoshop and my small Wacom Graphire Tablet. During the next phase I was interested in studying the composition and colour palette.

From the beginning I decided to tilt the horizon. It has been one of the elements that I haven't changed since the beginning. I like the dynamic effect that it creates and furthermore it should symbolize the danger of the situation. I had some doubts about the colour palette to use and I was quite hesitant about painting an active volcano. When I painted concept B, I instantly liked the idea of representing the volcano. I thought it could have been a strong impact element and besides I could have worked freely with colours, shape and position of the smoke caused by the eruption. When I started concept C I was so sure about the composition and the elements that I thought it would have been the base to work on for the final painting.

After collecting all the reference images, I started to add details but after only a few hours work I began to have some doubts. The element that didn't convince me was the active volcano. I was sure about its presence but the fact that it was positioned almost at the centre of my painting and also the fact that it was active gave it too much importance. It was becoming the main "character", spoiling the concept. When you have been working on a painting for several hours it becomes painful to admit that you need to take a step back, but from my point of view that was the right choice. Therefore I have decided to go back to where I started: concept A.

The colours were less lively and saturated, but at the same time less obvious and more serious, closer to what I wanted to express in the first place. I thought the presence of the city would have made everything more interesting and more consistent with what happens in the TV series. I haven't painted the actual Neo Tokyo 3 but a hypothetical Neo Tokyo 3. The city also helped me to represent clearly the proportions and the space in the painting. In concept B and C the presence of only natural elements like the cliff, the volcano and the gulf, didn't help to understand the real proportions. The city helped to create a wide and deeper view, as well as make the Angel's figure of enormous dimensions if compared to the buildings. Instead of working on the smoke from the volcano I concentrate my efforts on the clouds.

I have made the left part darker and used desaturated colours, moving the attention towards the brighter area. In that point I have positioned the Angel (backlight), transforming it into the main character. The shape and the colour of the Angel are clearly inspired by Kou, one of the two half of Israfel (the 7th Angel).

I kept the yellow and the orange saturated. The angel is the element with the most saturated colours in all the painting and I thought this would help to move the attention to it.

The city is inspired by different metropolis: Israel, Athens, Chicago and others.

I have decided to paint a river to break the elements in the city. In the same way the big structure similar to a stadium has been used to create a variation between all the buildings. The hooded man has never been a point of discussion. I thought he creates questions, like it happens in the TV series. What he has in his hand it is clear to all Evangelion's fans: it's the Lance of Longinus, one of the few weapons which can stop an Angel attack. 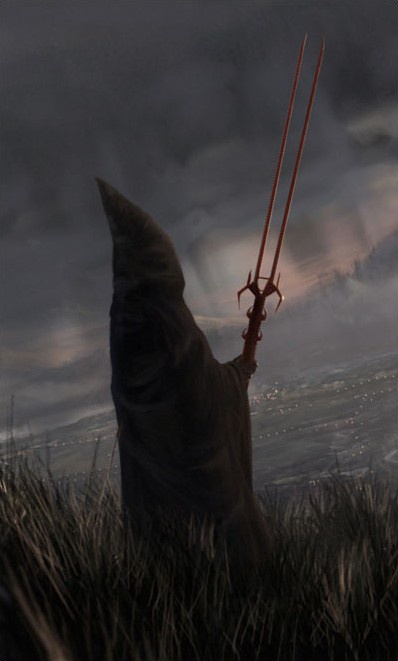 When I started the painting I have separated the elements in several layers. First for the intense use of the Ram, but above all because, when I paint, I like to move really quickly and chaotically from one element to another. Anyway I tried to group some of the layers to keep them into a reasonable number.

I painted all the images using the standard brushes of Photoshop. I have used the options Colour Dynamic and Scattering a lot. I have worked at a resolution of 3000x1500 pixels.