In this making of, Stefan Stoev demonstrates how you can create a fan art of a character from an existing IP and render him out as a miniature using ZBrush, Maya, and KeyShot...

Hi, my name is Stefan and I am a 3D Character Artist, currently based in Sofia, Bulgaria. In this tutorial I will explain the process behind one of my latest personal projects – Alumon - Battle Chasers Fan Art. I have chosen this concept because I wanted to work on a stylized character, and apply some of the new knowledge that I have discovered over the past couple of years. The workflow is pretty straightforward, but I will try to explain my thought process in the simplest way. So hopefully you will find this article helpful and enjoyable to read. 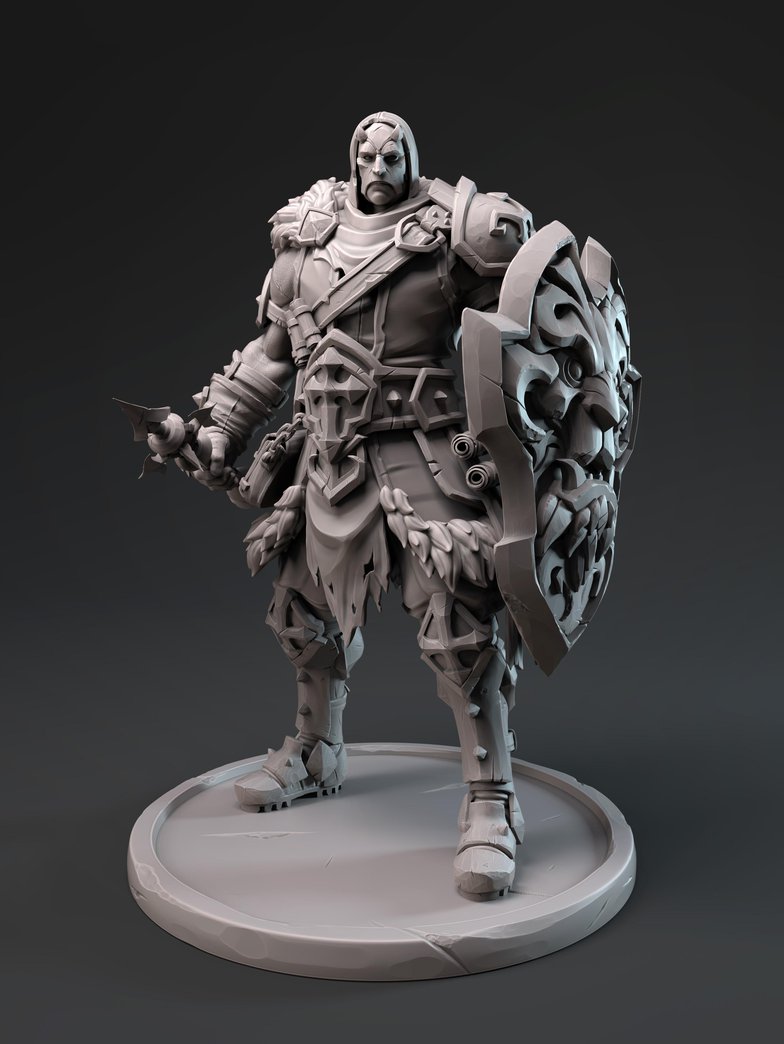 I’ve been a long-time fan of Joe Madueira’s artwork and I also love the style of the game Battle Chasers, therefore I decided to do a fan art of one of my favorite characters – Alumon. He has this sort of mysticism around him, whether he is a good guy or not, with really threatening appearance and weapons, so it was decided.

Before I jumped into production I concentrated on finding good references for the character appearance and the vibe that I wanted to convey. Gathering some reference material is a really important stage, it enriches the visual vocabulary of the artist and gives different perspective, you also see how other people have approached similar characters. A lot of artists underestimate the importance of this stage and jump straight into the creation process. However, later on while you are working on the project when you don’t have a reference board to compare your work and help yourself, you will start falling behind. 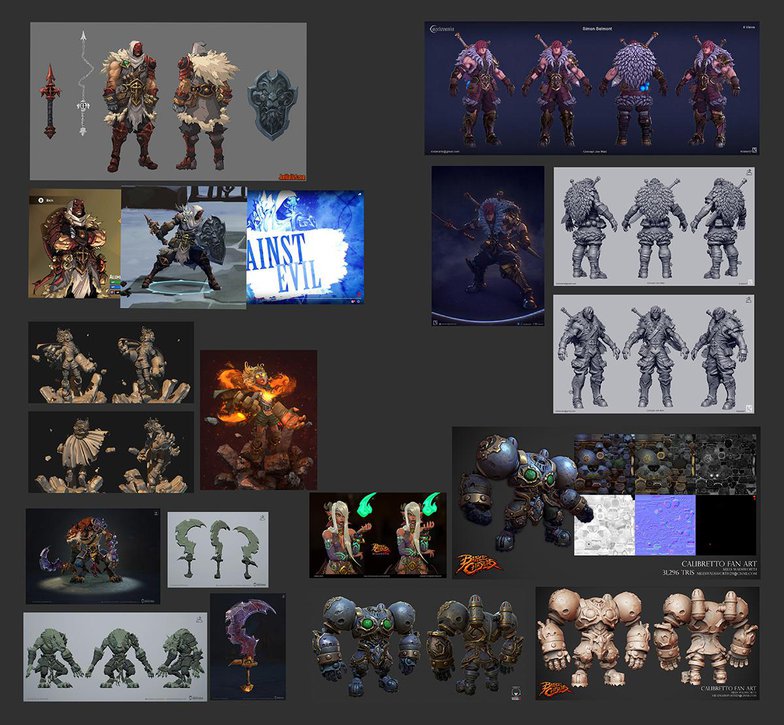 After the initial planning and creating my image board, I started the production stage. I used mainly two workflows to block out my base meshes.

The first one was low poly modeling straight into Maya. This workflow gives me the ability to model quite fast the main elements, and create clean proxy meshes, which later on I finalize in ZBrush using Zmodeler. I have used this method for the more complicated armor pieces and the props. 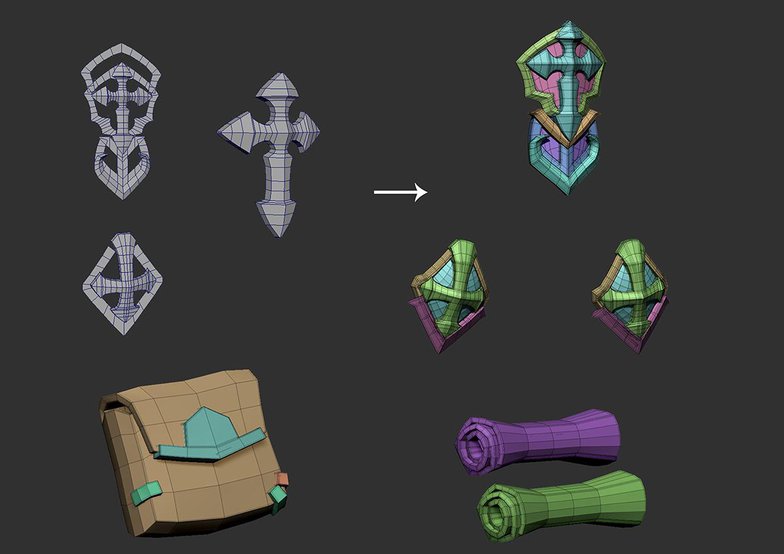 The other one is using Zmodeler and creating them directly in ZBrush. For example, with the leg protectors, I quickly generated some simple topology and started pushing and pulling my volumes to get the right shape. In the end I ran Zremesher a few times to clean up my mesh and add thickness with Edge Loops. 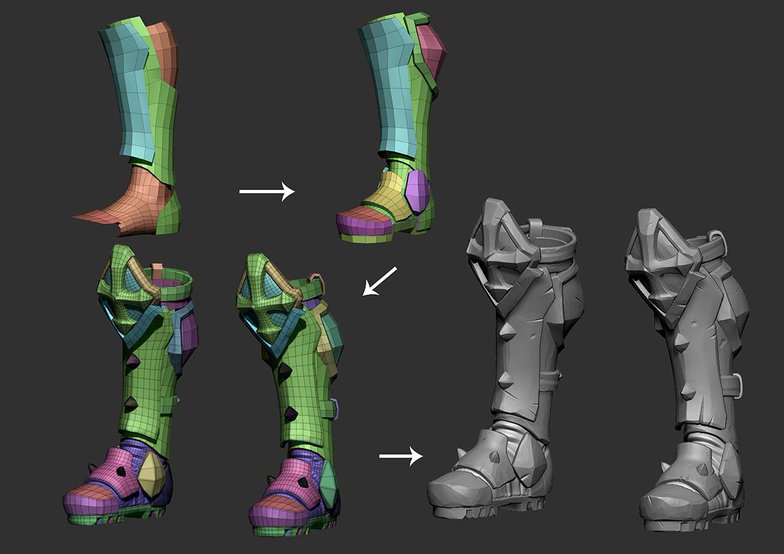 After using the combination of these two methods I crease the necessary edges and use Dynamic Subdivisions, which really helps me to get a better understanding of how my meshes will look once they are subdivided.

Blocking out the character

In the meantime I am also working on the character as a whole, blocking out the clothes and the main shapes. Most of the time I use a human base mesh as a starting point and then change the proportions so they fit the concept. If I want to focus on anatomy and study, I start from a sphere, but when I want to speed up my workflow and create a whole character, I use base meshes. Probably 80-90% of the bigger elements and pieces are extracted from the base mesh of the body (gloves, hood, shirt, trousers). I just duplicate, delete the unnecessary parts, and add thickness. This method is much easier for me, rather than using Dynamesh block in and then cleaning up the topology. It really depends what you feel more comfortable with, I just enjoy having clean topology. 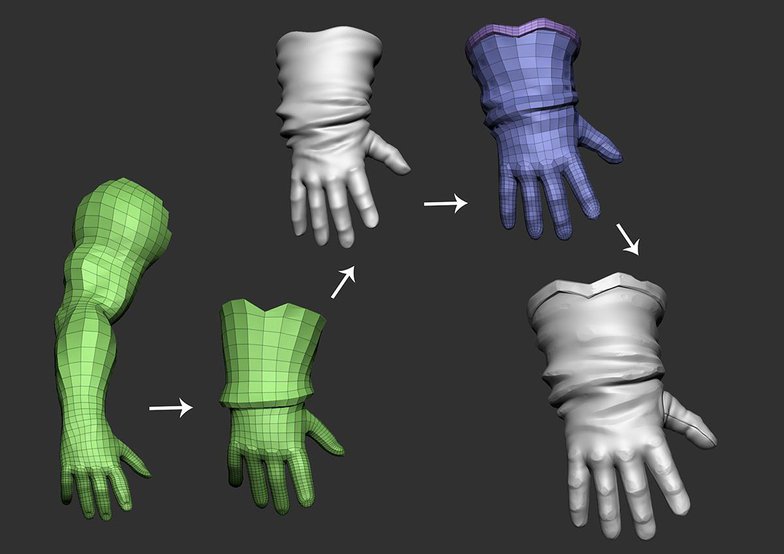 Process of the gloves

At this stage I did quite a lot iteration on the character, trying to get it as close as possible to the concept. It started kind of messy and rough, but slowly I cleaned up the main shapes. 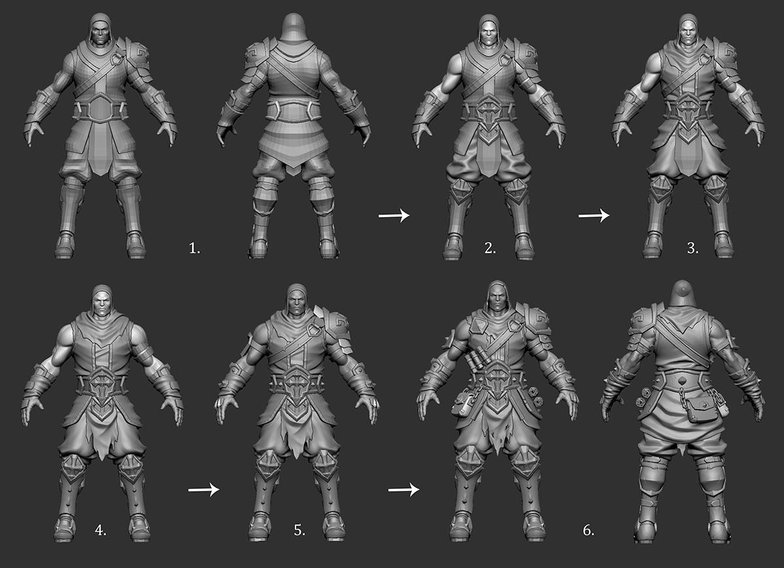 Progress of the character

I always use layers when I do a detailing pass, because it gives me a greater control over the whole process. First I create my main and secondary shapes; when it comes to the tertiary and the small details, layers come into play.  I use them in combination with the Morph target and the Morph brush, it is really easy to control the detail level. I use this method rather than working directly on my mesh, because I can always go back and tweak when it is necessary. However, keep in mind that adding a lot of layers makes your scene quite heavy and occasional crashes are expected, so use them carefully and save your project. As far as brushes I use, just the default brushes and Orb’s brush pack.

Nothing special was used for the detailing of the clothes. After I have my base mesh I start to layer my folds with DamStandrad and OrbCrack brushes. Then I add some Standard where I want to emphasize a stronger fold, and HPolish to smooth out my surface if it is lumpy. I run Clay Polish with Sharpness set to 20-30, I found that this gives me the best result, cleans up and sharpens my mesh. After that I smooth out the mesh by hand if it is necessary. I add some surface damage or wear and tear where I find it appropriate, it really depends on the character. 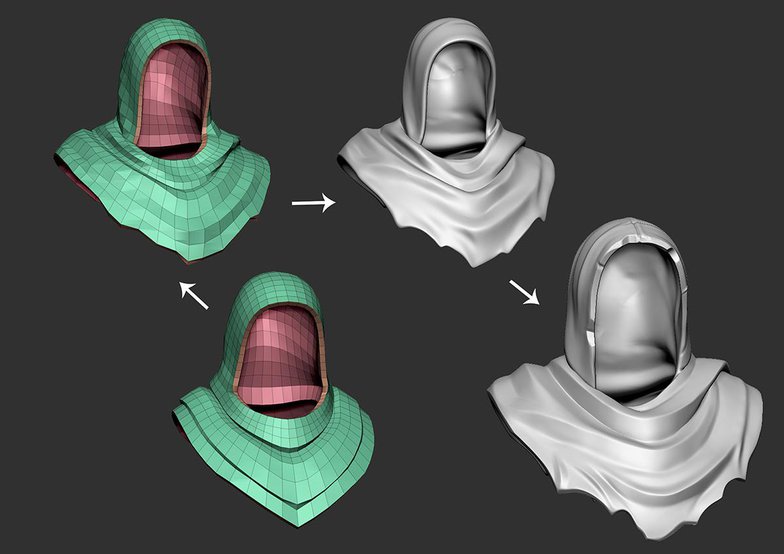 Process of the hood

For this one specifically I wanted to keep my clothes cleaner from damage, because my armor quite detail heavy. I made this decision so the viewer’s eye can have a place to rest, you need to keep some of the elements less detailed than others, otherwise it just gets too noisy and takes away from the character.

The armor on the other hand was slightly more time consuming. I did a few iterations of the detailing, but the first ones were looking just too bland and generic. So that’s why I decided to add some rougher surface damage, not only scratches.

In order to mimic hammered metal that is worn out in a stylized manner, I roughly sculpted over my clean base meshes with a Clay brush and then started to smooth it out with Trim Dynamic. By doing this I added interest and broke up the surface of the metal, which later on would look really cool with the texture. I used Orb Clay Tubes with Trim Dynamic to add some edge damage. Clip Curve was used to add some general cuts. I finalized the detailing with some Orb Cracks brush to give the armor even more story. I also aimed to have various types of damage on the different surfaces so I could have a good material distinction. 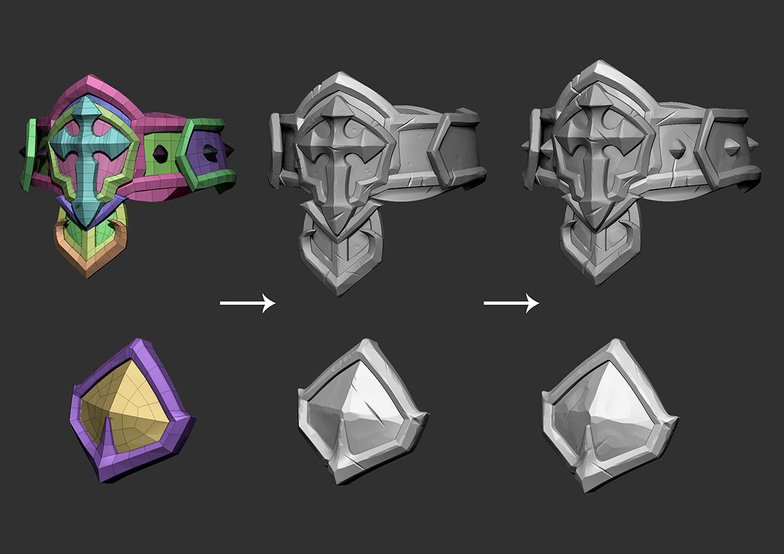 Process of the armor

Going back & reassessing the character

At this stage I was pretty much done with the character, but there was something that was just not right about it. I’ve spent too much time working on him, which is why I couldn’t see my mistakes and what was off. So I decided to give myself a break and go back to him later on, it was perfect timing, because I had other work related things that I had to deal with. After a while when I had free time I opened my file again and started spotting some issues with the overall proportions, detailing level and some of the elements. Then I spent quite some time on balancing the character and reworking until I was finally happy with everything.

I must say that this stage was probably the most crucial in terms of quality and the final result, it really made an impact on how successful the character was.  It also affected the future stages of this project, if I decided to push him to a game ready asset.

The shield is a perfect example of the first technique that I use – proxy mesh modeled in Maya, then exported in ZBrush and finalized with ZModeler. I tweaked the different parts and added more where it was necessary. Again I used Dynamic Subdiv to preview my mesh, then divided and detailed it using the same brushes from before. It is a pretty straightforward approach. 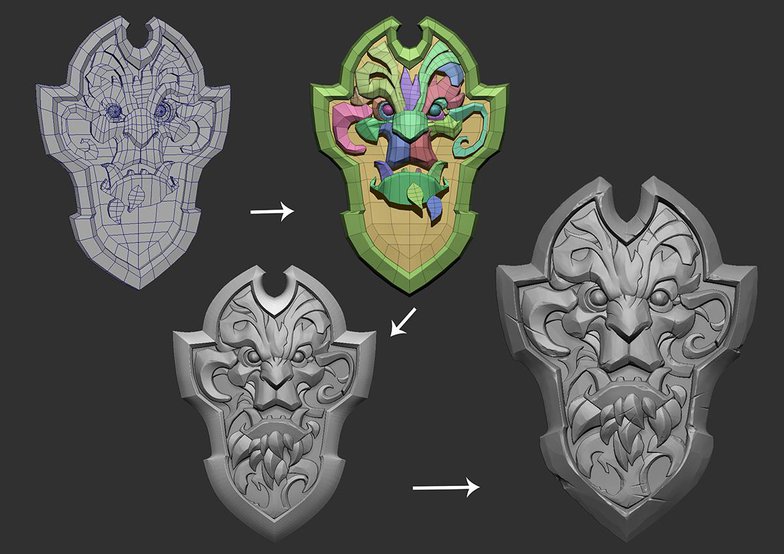 Process of the shield

The staff on the other hand was modeled very precisely and close to the concept from the start, without changing my proxy mesh too much. Sometimes I tend to spend a little bit more time on my base meshes, because I know there won’t be many changes in the later stages. It really depends which works better in different situations, but you should always think ahead and try to plan the next steps of your workflow. 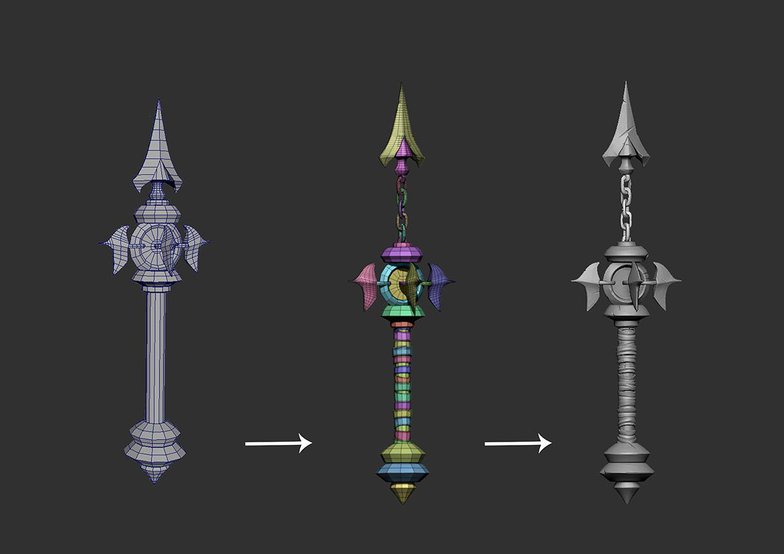 Process of the staff

This project was aimed to get through the whole pipeline of a real time character for games. However, I didn’t want to go for a boring T-pose presentation, that’s why I gave him more of a miniature look so I could show all the work I had done in ZBrush. I chose this type of heroic pose because I think it sells quite well the idea of a strong warrior type of character, with raised shield and ready for battle.

I used Transpose Master in ZBrush and posed my character in stages. First, I got rid of all the props and smaller pieces. I did a rough pose and started tweaking and balancing the character by masking different parts, rotating, and moving them. Then I added the props and the weapons. I carried on working for a while, added a simple base and voila, I was happy with the result. 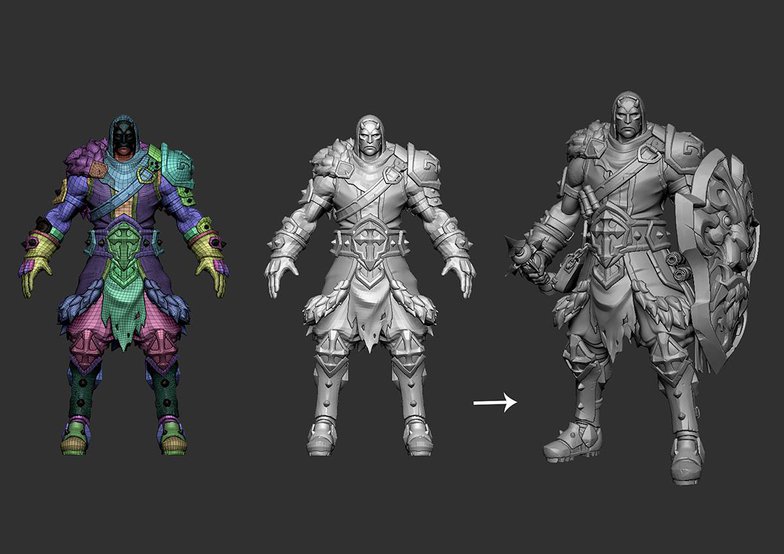 I really wanted to push my presentation and have a specific look for my character, that is why I spent some time on the rendering stage. KeyShot is my go-to when it comes to nice clay shots, I really love the final results and how simple it is to use. I’ve used two lighting techniques for this project.

For the first one I used the HDR lighting and added some additional light sources (pins) in the scene. Four lights setup has been used for this method, with Main, Fill, Side, and Rim lights. 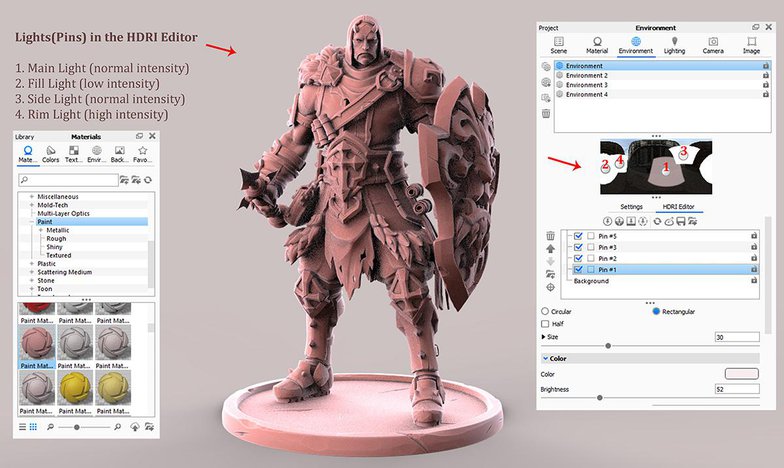 For the second one, I reduced my HDR lighting to a minimum and used three disk shapes with light material on them, trying to mimic studio lighting. I played with the settings and used three lights setup with Top, Main, and Side lights - the HDR was set really low and represented a Fill light. The Top light together with the high contrast helped to convey a more dramatic look. 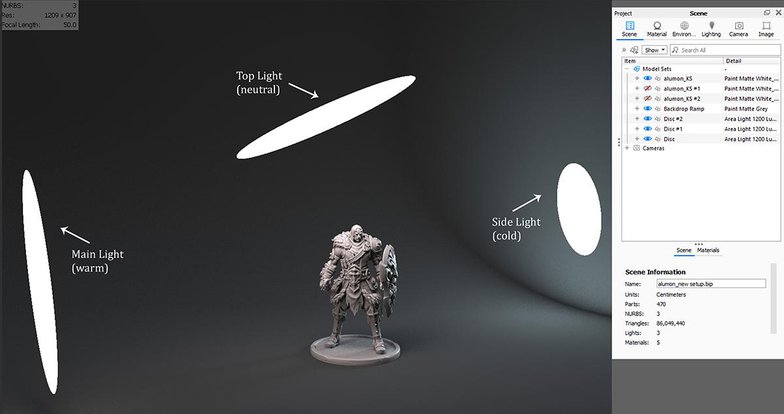 After I was happy with my light setup I rendered a few passes (AO, Shadow, Reflection, and Mask) to do a simple post production. Then in Photoshop I used different layer modes and levels to overlay my passes. I continued working and editing until I was satisfied with the final results.