Hello, my name is Omar Fernandes and I'm from Lisbon, Portugal. In this article I will try to explain the process of the creation of my image, "Alfama", which is part of my Vancouver Film School demo reel.

I decided to make this image/movie because I wanted to show some of the beautiful places in Portugal. Although this place is located in the stunning neighbourhood of Alfama, Lisbon, I decided to go with this old alley to show - and improve - my texturing skills.

After searching the Internet for references, I asked my friends to take some pictures of the alley so that I could have a good starting point for reference. No matter what the objective of your work is, the more references you have the better (Fig.01). 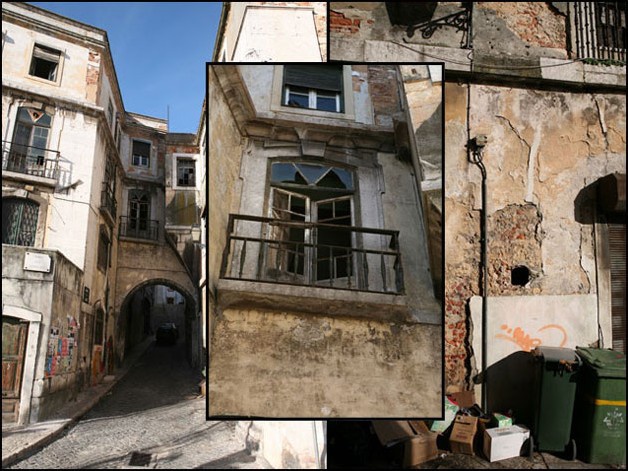 The second step was to create a good proxy. In order to obtain the height and depth of each building, I began to match some of my photo references (Fig.02). As you can see, matching the perspective of my camera with the one in the photo was relatively quick, though for my project it was not necessarily as important for what I wanted to accomplish in the end. 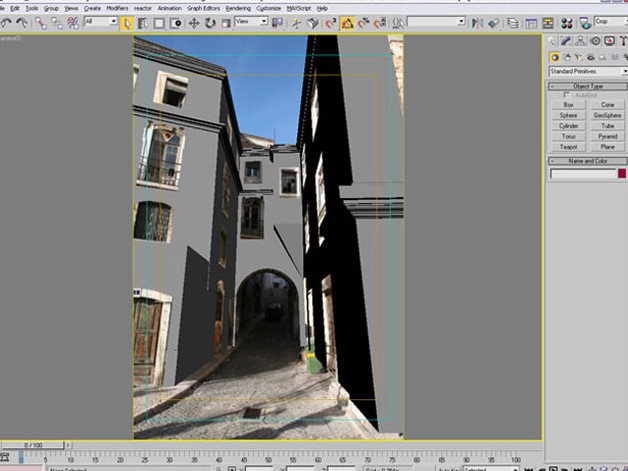 Next, I started by modelling the props in the scene and texturing some of the metals, doors and windows. The process was always the same: model, unwrap and texture each object (Fig.03 - 04). As you can see, most of the scene is very low poly. 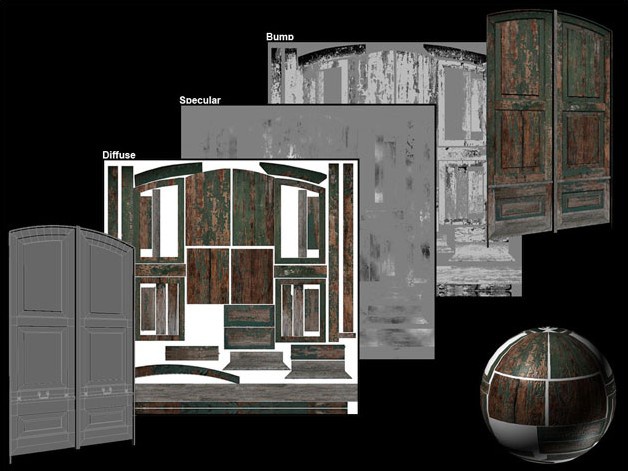 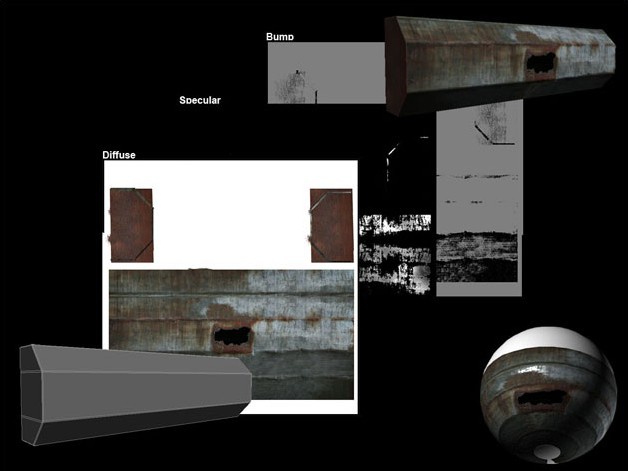 Here are some of the props and windows I made for the scene (Fig.05), always using the same methodology - first model, then unwrap and then texture. At this point I wasn't too worried about tweaking the shaders as my scene didn't yet have a final lighting setup. I only roughed in an Omni, a directional light which gave me an idea of how the textures would hold up. 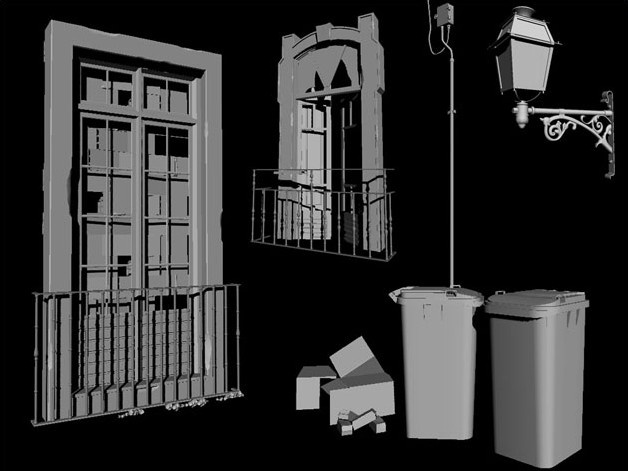 For the archway I decided to experiment with a different approach. Basically, I lofted a curve and then created a texture of 512 x 4064 pixels. Then I used the UVW xform modifier to apply the UVs to the loft. Afterwards, I converted to poly and added destruction to it using the cut tool (Fig.06).

After all the doors, small plants, windows - and every small object in the scene - had been modelled and textured, I began working on the walls. For the walls, the process began with a proxy, then textures.

Afterwards, I converted to polygons and added destruction by cutting into the geometry. This way I could maintain the UVs on each wall and create the destruction following the destruction of each texture (Fig.07 - 08). 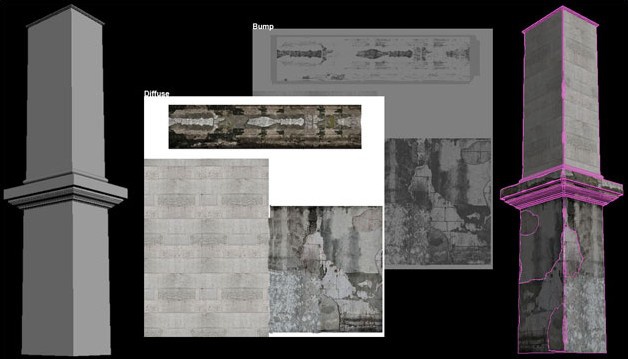 Leaving the walls till last allowed me to bake the occlusion pass into the diffuse texture using the render to texture feature (since I already had every object in place). Doing the occlusion pass this way allows the objects to follow the scene lighting correctly. If you do the occlusion pass separately, instead of baking it to the textures, the shadows tend to be too dark and appear as though they don't "fit in" with the scene's lighting.

Finally, I began to create the ground. As you can see from my references, the ground that I had to do was fairly bumpy. I first tried using displacement, but render times became too long and for the animation there was a lot of flickering. So I worked on another technique (Fig.09). 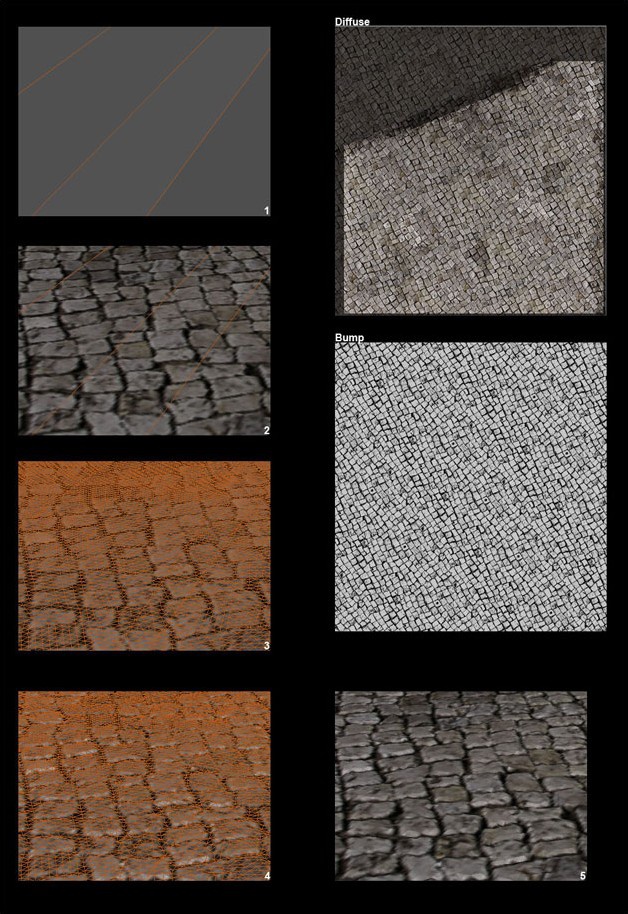 The first thing was to model the base mesh for the ground (1).Â  Afterwards, I un-wrapped it and painted the diffuse, bump and the displacement textures. After applying the textures (2), I converted the mesh to poly so I didn't lose the unwrap information. I then used a subdivide modifier (3) on the mesh. That way, I could control how many polygons my mesh would have depending on how close my camera was to the mesh. Finally, I applied a displace modifier from 3ds Max (4) that let me see the displacement in the viewport. To finish, I modelled some plants and scattered them around.
Here you can see the final model (Fig.10). 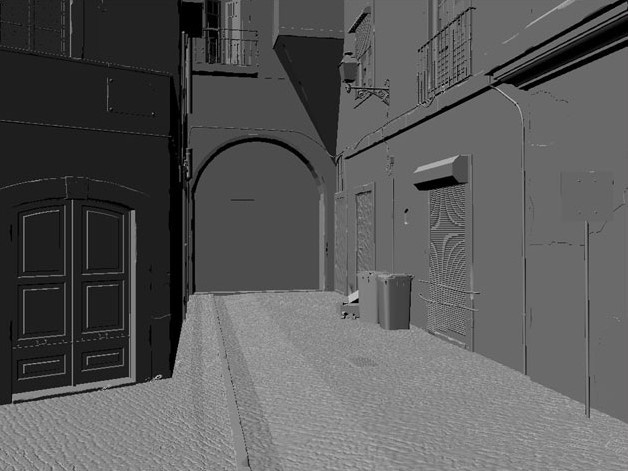 For the lighting I decided to try Vray sun and Vray camera. After a couple of tests I defined my final settings (Fig.11 - 12). 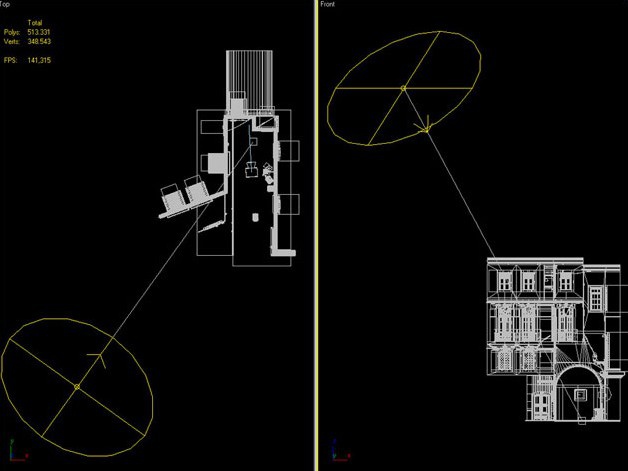 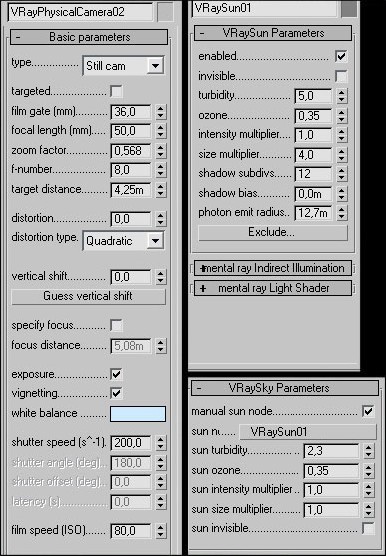 For rendering purposes, I used V-Ray with an Irradiance map and light cache (Fig.13). For the final image/animation I didn't do very much post-production work, just a little colour correction, as I had already done a lot of work on the textures (Fig.14). 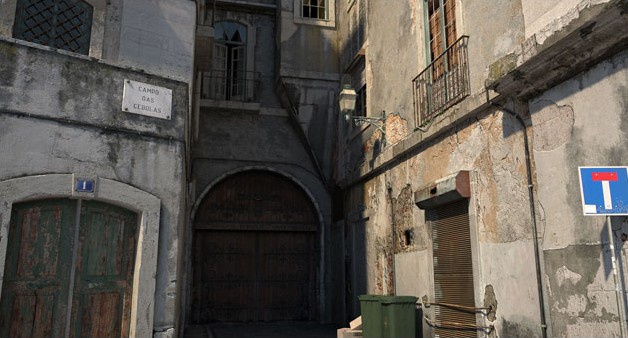 I hope this Making Of is somehow useful for you! Thanks to all and best wishes.