The idea came from a series of documentaries called ''Airbus A380'', from the Discovery Channel. Fig.00 was captured from the videos. This is one of my hobbies: to see the process of making of machines, especially seeing where thousands of components have been designed and assembled. In the final moment, when the control tower permits, they prepare to take off - Airbus A380 starts up with full power going to all of its engines. This really made me cry, so many times! It was for this reason that I wanted to create this image. However, I wanted to have more room for imagination, so I set up an environment in a sci-fi style with dramatic lighting. 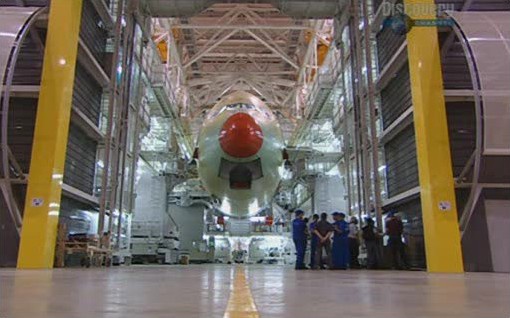 I started to model this environment from the basic framework of the aeroplane, focusing on the joints and using some illustrated handbooks for reference. Basically, when I came up with a set of steel frameworks that I felt comfortable with, I copied them into a small group. You can see this from Fig.01. The most important thing for me was to make sure the structure was reasonable and could be built properly. Even though I am not a structural engineer, I understand that it has to be right for the artist's eyes.

After the basic steel frameworks were done, I tried to extend the rear of the structure to shape the middle part of the ship, and started putting some sheet metal to cover the ship's body Fig.02. 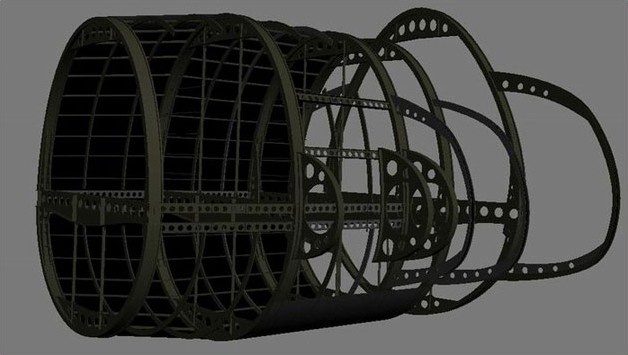 I could then use my imagination with it more. I continued to extend framework and sheet metal at the same time. If it came out well, I kept on doing it; if not, I went back to adjust one of them to fit the final version. For example, Fig.03 originally had a stiff and dull design for its rear roof - it was more like WW2 aircraft, so it was far from sci-fi. 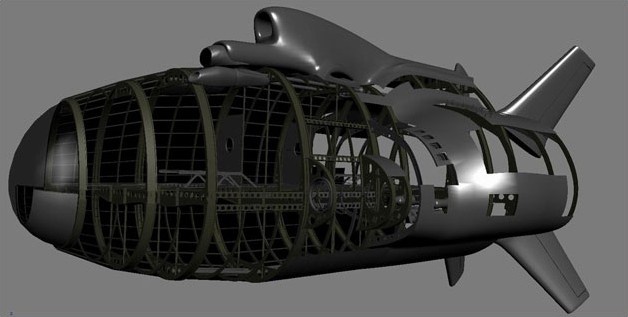 After modelling the main structure of the ship I had the proper frames and surface for the exterior. I then started to focus on adding more detail for the ship's interior, such as pipes connected to the air intake, electrical equipment, engines and so on. These small details always help me to turn my imagination into reality (Fig.05 - 06). 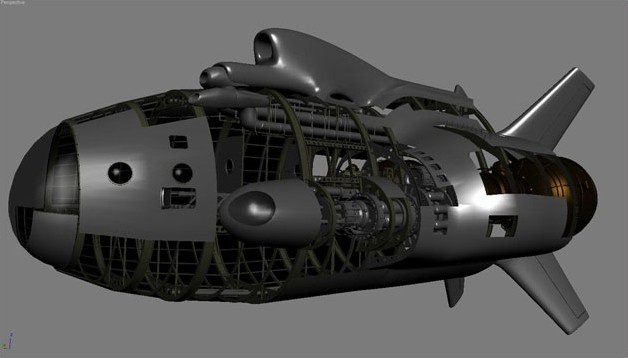 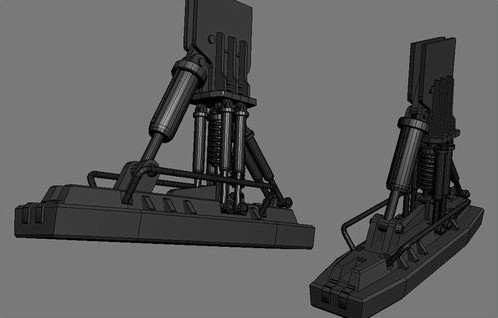 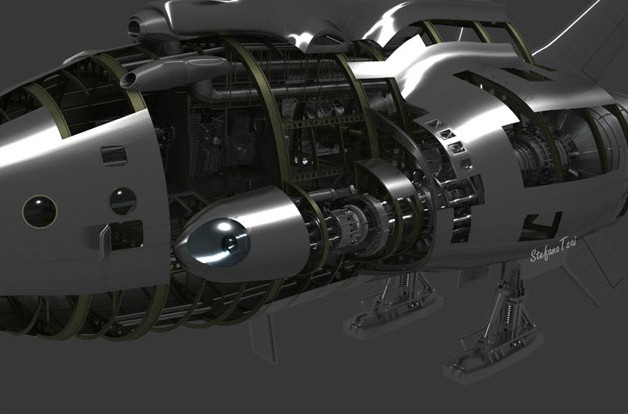 I then designed and modelled a few sets of building structures for the background. Those basic components made it much easier later on. I could duplicate and spread them into the entire scene with the same style (Fig.09 - 11). 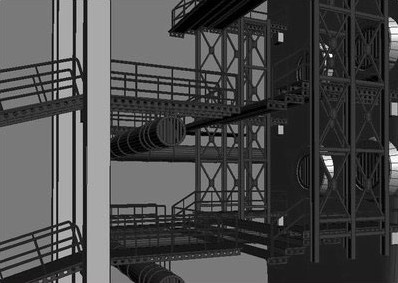 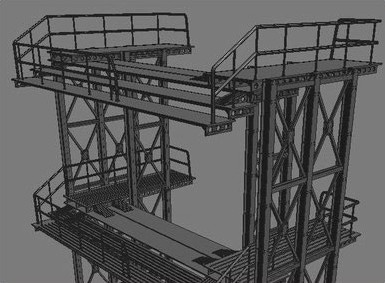 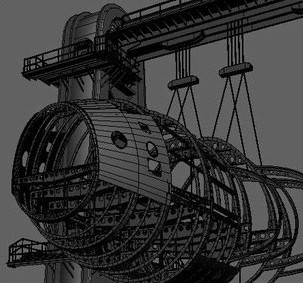 I then started to put all of the elements together and set up the basic lighting in order to get a rough feeling for the atmosphere. Basically, I only put two colours into the scene: yellow and green. This made it easier to achieve contrast between the foreground and background. In the beginning, I put one main direct light in the top left, above the environment, and then created Omni lights one by one. The more Omnis I put into the scene, the more details people can see. It is easy to control where do you want these focal points to show up (Fig.12). 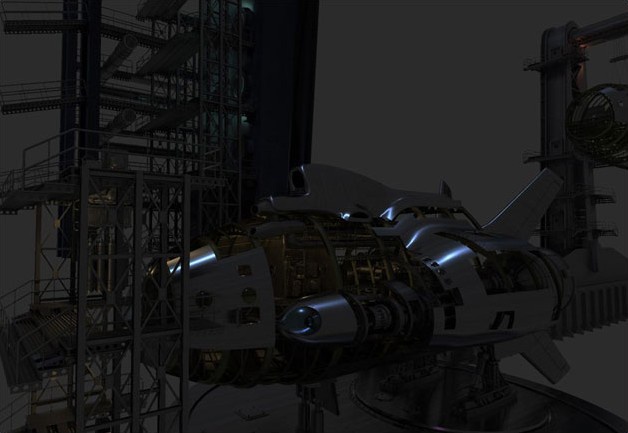 Details were added to the background - an automatic welding machine. This was a very important element in this scene. The airship is like an asset for the middle distance; however it needs a visual connection with a background and this welder is the key (Fig. 13)! 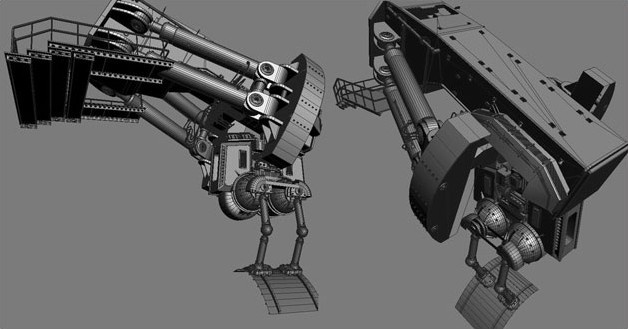 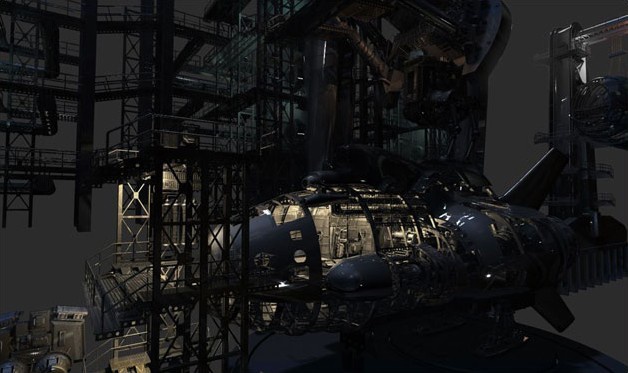 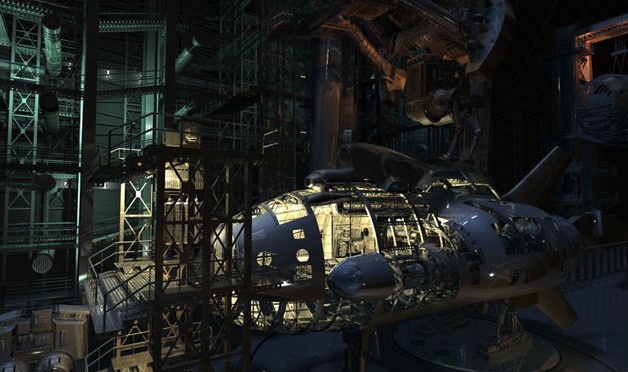 The layout was then changed to wide-screen, which I think helps to achieve some nice depth of field. We can see more details behind the ship. More elements were brought into the scene (Fig.16).

Front details were then added to further increase the depth of field (Fig.17 - 18). 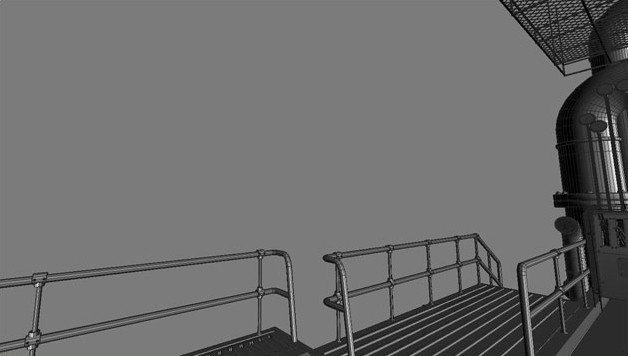 There was nothing on the left side of the image to strive against the right side, and so a small machine was added to fill the left and to create a nice balance between the two areas (Fig.19). 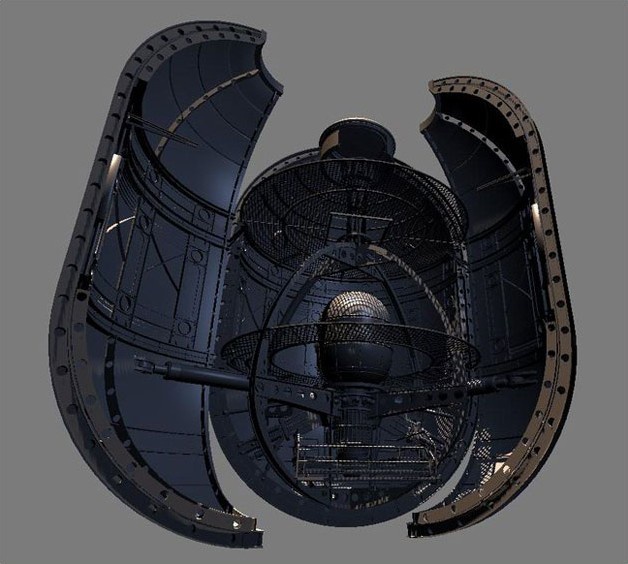 I used Photoshop to add lighting and smoke effects. I separated them into many folders so I could manage them easily. Try to do this in the beginning as precisely as you can, otherwise it will cost you more time later on when you have so many elements in the scene (Fig.20).

I then used Combustion to add a Z-Depth channel into the scene. This way it is easy to adjust how much you want to blur the background, and you don't have to wait for long periods of time for rendering (Fig.21)! 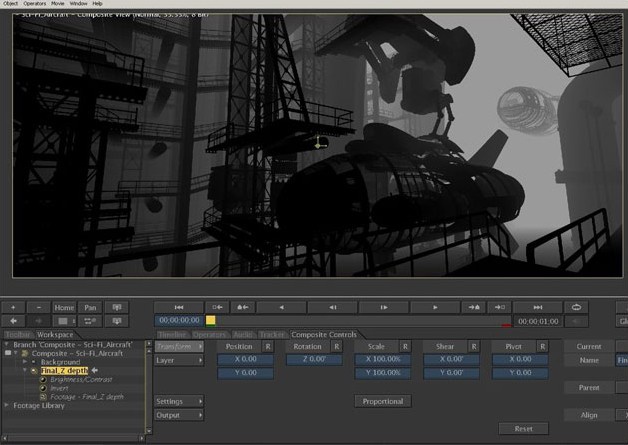 It was too saturated at this stage so I applied more colours and increased the lighting intensity twice. However, you have to take care of the mid-tones; it's very easy to lose them after increasing the contrast and saturation. For this reason, I separated them into many layers so I could control each of their values only in mid-tones, shadows and highlights. For adding vitality to the scene, I added a third colour, which is blue and dark blue-purple in the middle area. This way we have a buffer colour between yellow and green (Fig.22).

And here is the final version of my image (Fig.23). Thanks for your time. Comments and critiques are very welcome.