The techniques used to produce the hair in this tutorial will be quite simple from a technical standpoint. Only the simplest brushes in Photoshop will be used so that anyone can follow along using any program supporting some form of layers which is the one needed function. The other important tools are the smoothing tools: blurring and smudging, tonal tools: dodging and burning, and of course the paint tool using the normal, multiply and rarely, hue functions. Last but not least a graphics tablet of some type is most important both to create the smooth curves of the hair strands and in order to exploit the pressure sensitivity of this tool. 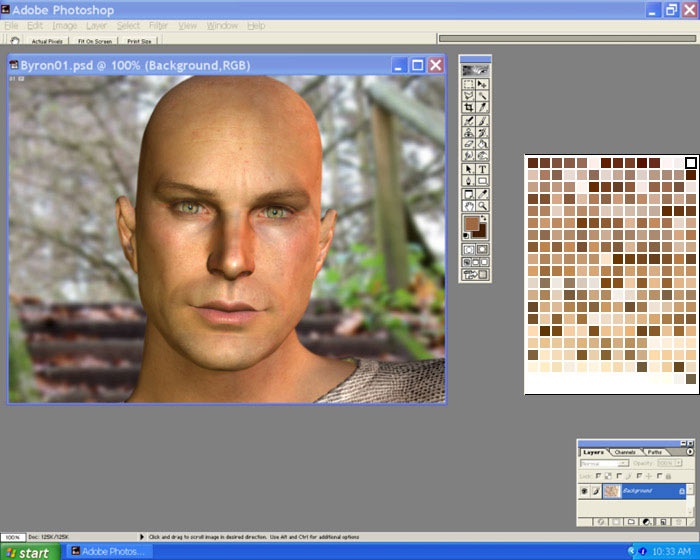 In the above image we see the Poser render imported into Photoshop. What may not be obvious is that there are already two additional layers at this time. I rendered the Poser figure against the default grey background so that even if we're not using Photoshop, and consequently not able to retrieve the embedded alpha channel Poser adds by default to photoshop documents, we could easily make a mask of only the figure. Consequently, the first layer (called the 'background' in Photoshop) would be the Poser render, then above it in additional layers would be first, the imported background photo and secondly, above both, the extracted figure by itself. One could also render the figure over the backgound photo in Poser, but in cases where we would like the hair to exist behind the figure, things would become unnecessarily complicated. Also with this scenario it's possible to pop in various background photos as tryouts and make a quick decision without struggling in Poser, importing and clearing background photos.

So at this point we have three layers, stacked one over the other with the figure on top. You will see on the right of the screen, a box containing a large group of small swatches of colors. Copy it from this page since it is at it's true size only in this image. This is the palette which will be used to create the hair. It's a group of colors for a medium blond hair type lit in natural light. The upper half in this image corresponds to the cooler tones with the warmer tones grouped below it. Instead of using an Adobe swatch collection, I've created this simple graphic since anyone viewing this tuturial can copy and extract it and not need Photoshop in order to use it and last but not least, it meant one less page in this tutorial. :) 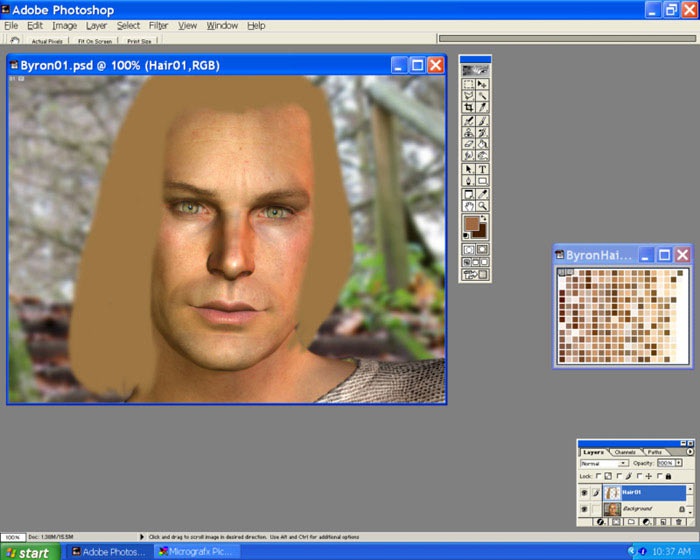 Here we'll begin by adding a new layer, calling it Hair 01. We'll choose a medium tone with good saturation from the swatches and begin by blocking in the color about where the hair will be, using a rather large round brush with soft edges at approximately 50% opacity (a 45 pixel brush for a 600x800 image).

Now we begin to add some long strokes to define the movement and character of the hair using a soft brush again. This time it is about 9 pixels in size using a darker color set to either normal or multiply if available, both work, at again about 50% to 75% opacity. 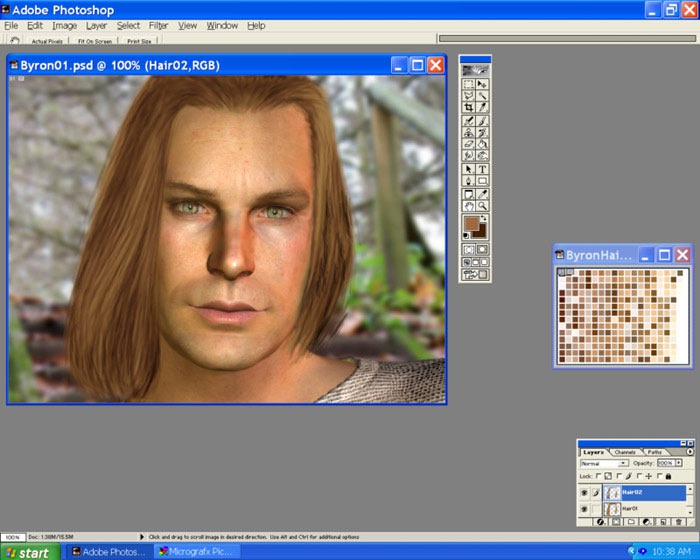 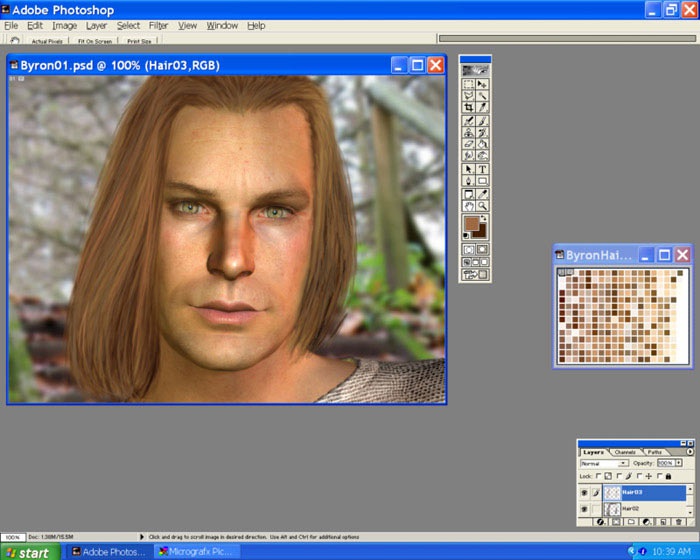 At this stage we add two colors above the previous layers calling this layer Hair 03. A rather strong and warm tone on the right toward the major light source and a cooler one on the left in the shaded side. This is with a 5 and 9 pixel brush using the normal setting with some transparency too.

On this layer we add some warmer tones all over with the 3 and 5 pixel brushes with some transparency. If available, use both the normal and multiply modes. 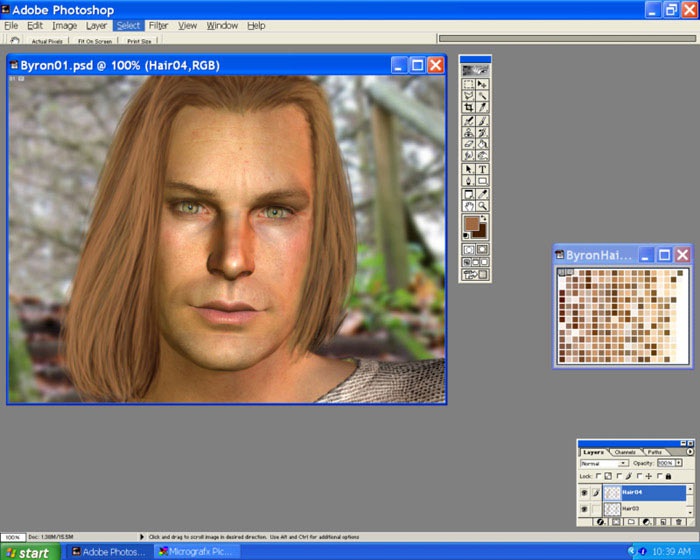 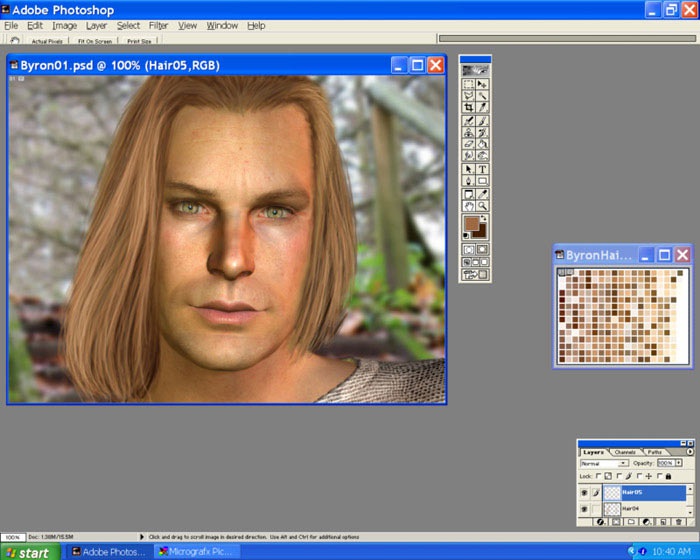 We just keep adding tones in the same manner as before, adding into new layers to allow a controlled application of the color and as a simple undo. If we don't like what we see, we can simply delete the layer. The brush size ranges from 3 to 7 pixels. Experiment with the opacity settings and the normal and multiply modes if available. Remember these brush sizes are for working on a rather small file, 600 x 800 pixels. If you're working on a much larger file, the brushes must be correspondingly larger.
Now we add lighter tones to further define the form, sense of light and natural movement of the hair in another new layer; Hair 06 here. Notice on the right a light spot on the hair is being built to correspond to the principal light source. Brush sizes still at 3 to 6 pixels. 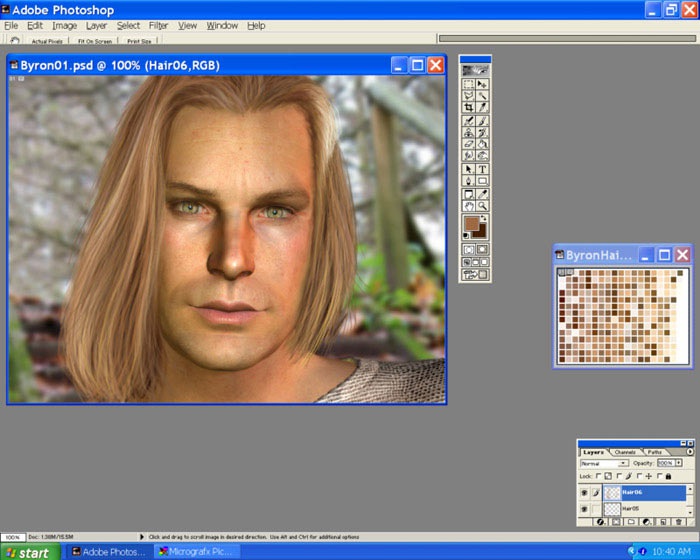 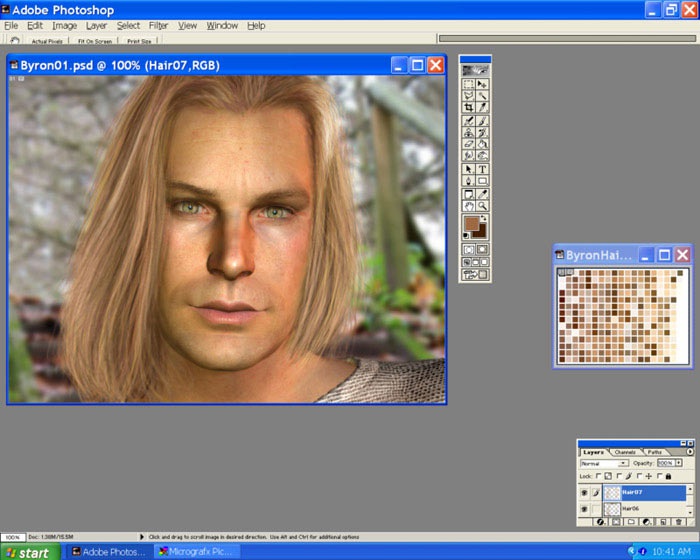 In this layer we continue to add subtle variations of the hair tones, slowly adding warmer, more yellow colors to simulate the warmth of the sun while at the same time building up the details. The smallest brush size is still 3 pixels.

In this step we pay attention to the relationship of the Poser model and the hair object, adding detail to the areas where they intersect in an attempt to create a sense of true physicality. 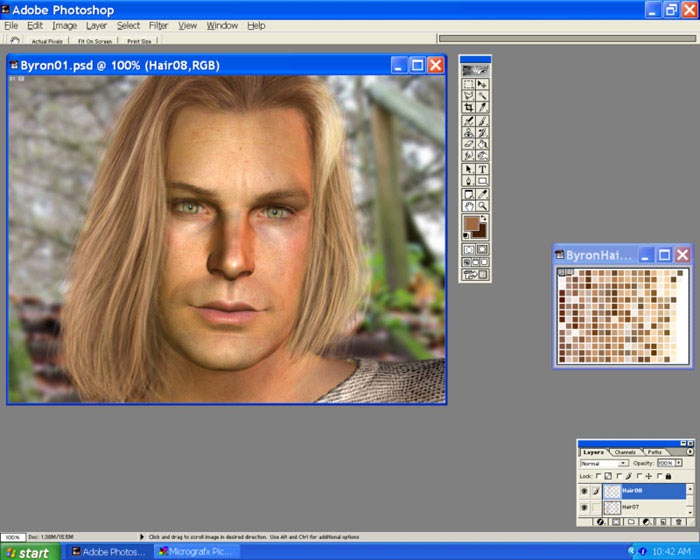 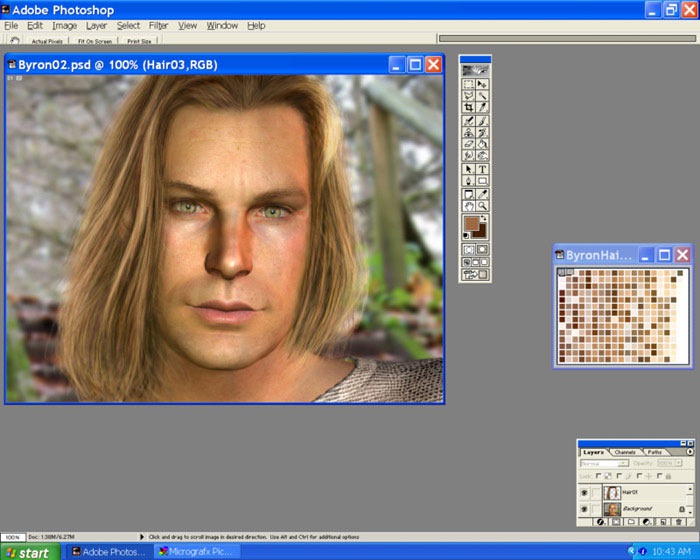 This is an important step. Here we must flatten all the hair layers in order to procede with the project. After flattening, we can use the dodge, burn and erase tools globally. First use the dodge tool to easily create more sweeping areas of shadow. Notice on the left, the eraser tool has been used very lightly to expose the models right ear just a bit, giving a subtle impression of lightness and transparency to the hair. Afer we're finished with the dodge too we procede to add more hair detail with lighter tones creating the 'crisscrossing' typical of hair strands. 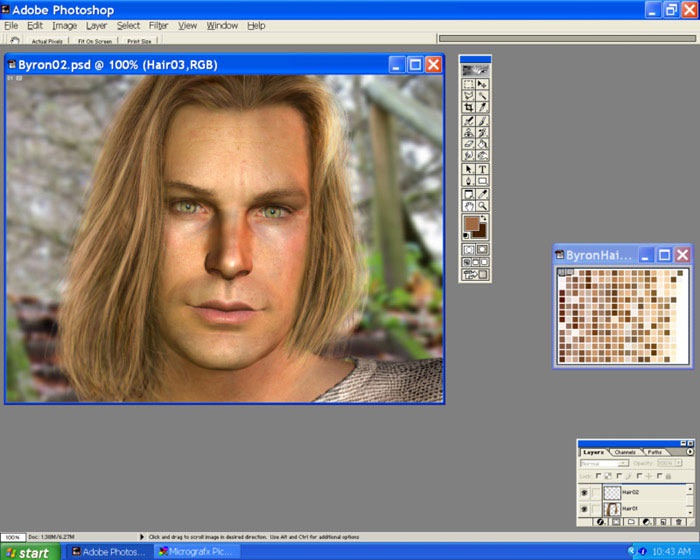 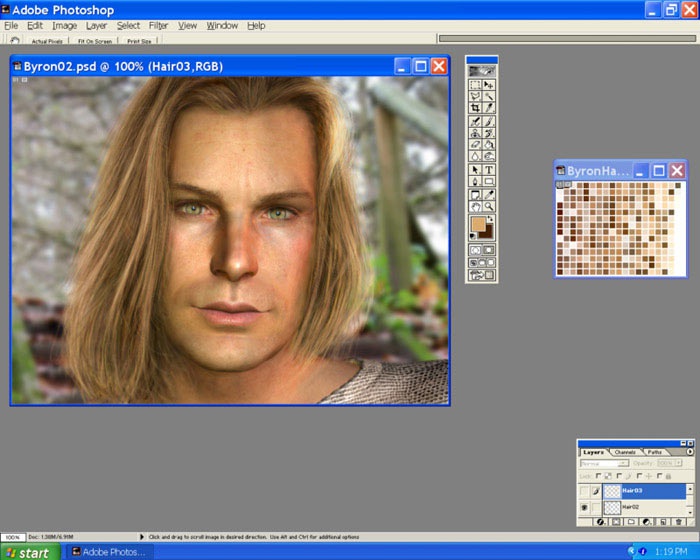 Here while continuing to add smaller strands of hair, some attention is paid to the shadows that might be cast on the figure about the forehead and cheeks as well as deepening the shadow under the chin.

Lots of use of the 1 pixel brush to achieve that wispy look. All the edges receive equal attention. The highlights get added detail too. 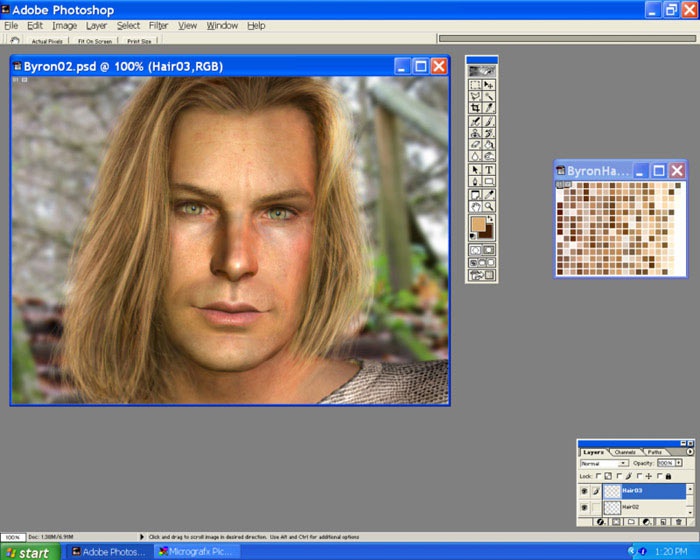 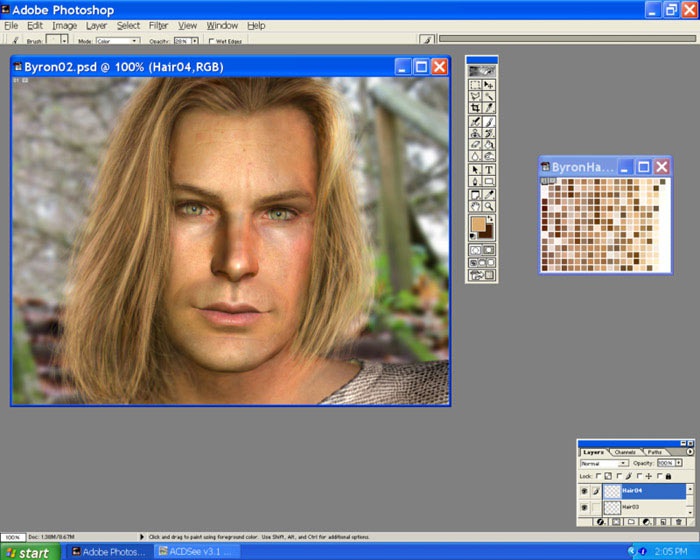 A few hundred more strands and some softening to the edges and voila! It's finished.

I hope you find this tutorial helpful. Thanks for looking.
Â
Regards,
Arthur Â