Freelance character designer, Henning Sanden, talks us through his ZBrush, MODO, MARI and Photoshop pipeline in the creation of his dramatically-lit and textured comedy monster, Moody Conrad... 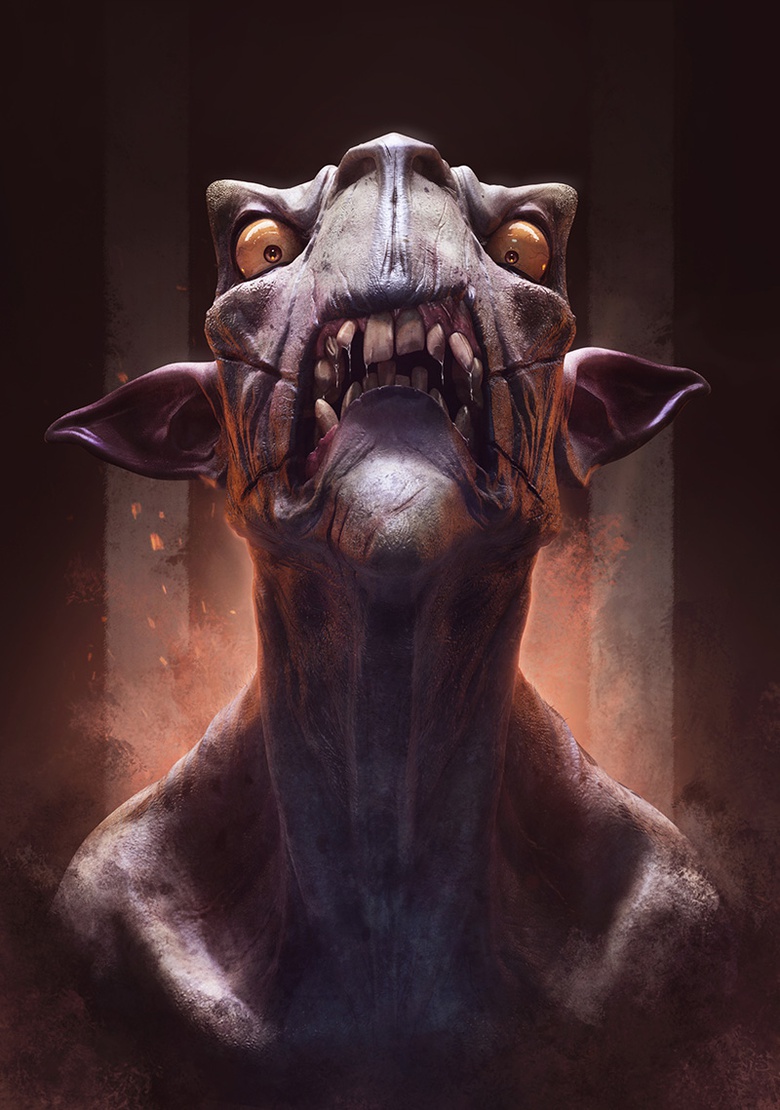 Freelance character designer, Henning Sanden, talks us through his ZBrush, MODO, MARI and Photoshop pipeline in the creation of his dramatically-lit and textured comedy monster, Moody Conrad...

I absolutely love to sketch in ZBrush – it's a very zen experience for me. I often simply doodle around, and occasionally get something interesting that I can turn into a final piece. This was one of those sketches. I started out with no idea of what this was going to look like, simply pulling and pushing shapes using the Move and Clay Buildup brushes. Once the sculpt was working, I took it into Photoshop to paint over it. For me, this is a really efficient way to create concepts. 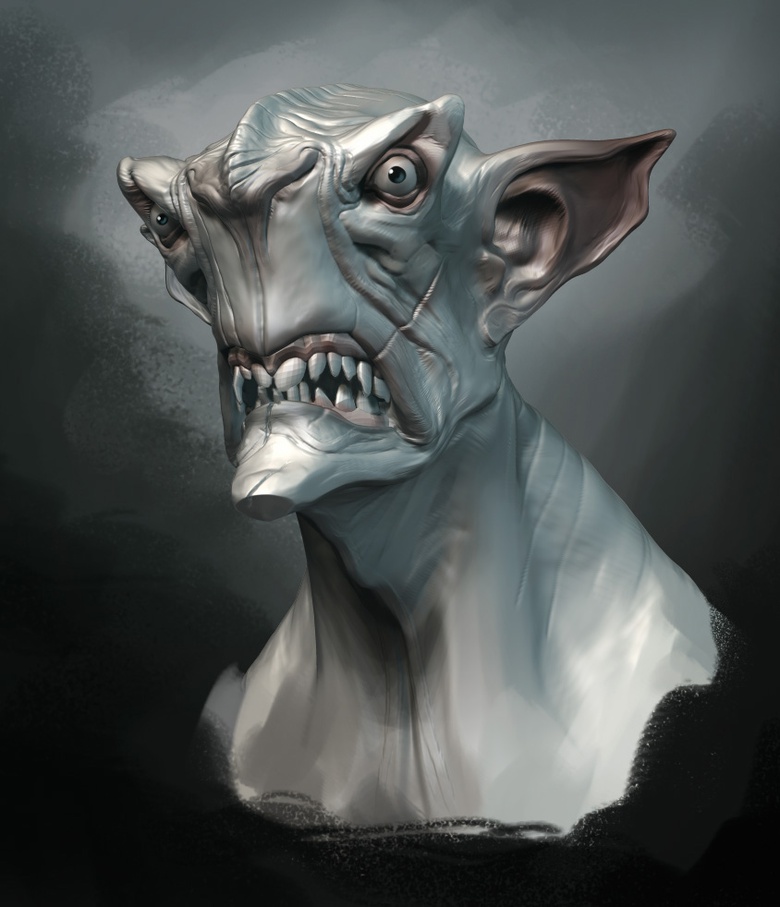 At this point, I started to refine the sculpt. Still though, the only thing I cared about was the form. I carefully checked the silhouette at this stage to make sure it was as strong as I could get it. You should really consider a model to be a 360-degree silhouette. This way, the model will work from every angle.

During this stage, you don't put in any details, like pores and fine wrinkles. Think about the big masses, like the underlying skeleton, muscles, fat and skin. The number one beginner mistake I see is to put details in way too early without a working model underneath. 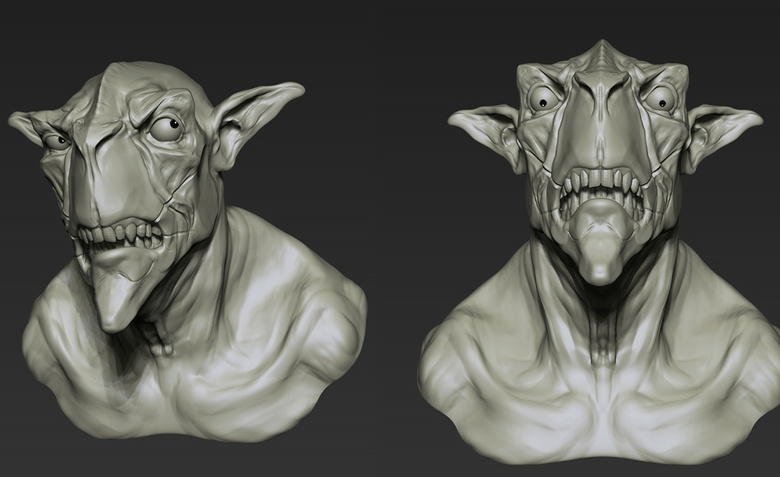 Only work with big shapes and check your silhouette often

I will do test renders of all my projects throughout the production. This is extremely helpful to settle in on what I want in the end, particularly when I'm not working after a concept image set in stone.

I took the model into MODO, which I find to be phenomenal at lighting, shading and rendering – with thanks to the interactive preview render. Doing these tests really helps me to know in which direction I'm going with my project. It's also a good idea to do these tests as I feel I can experiment with the lighting, use of colors and composition here, as I'm not as attached to the final image as I am in the end. 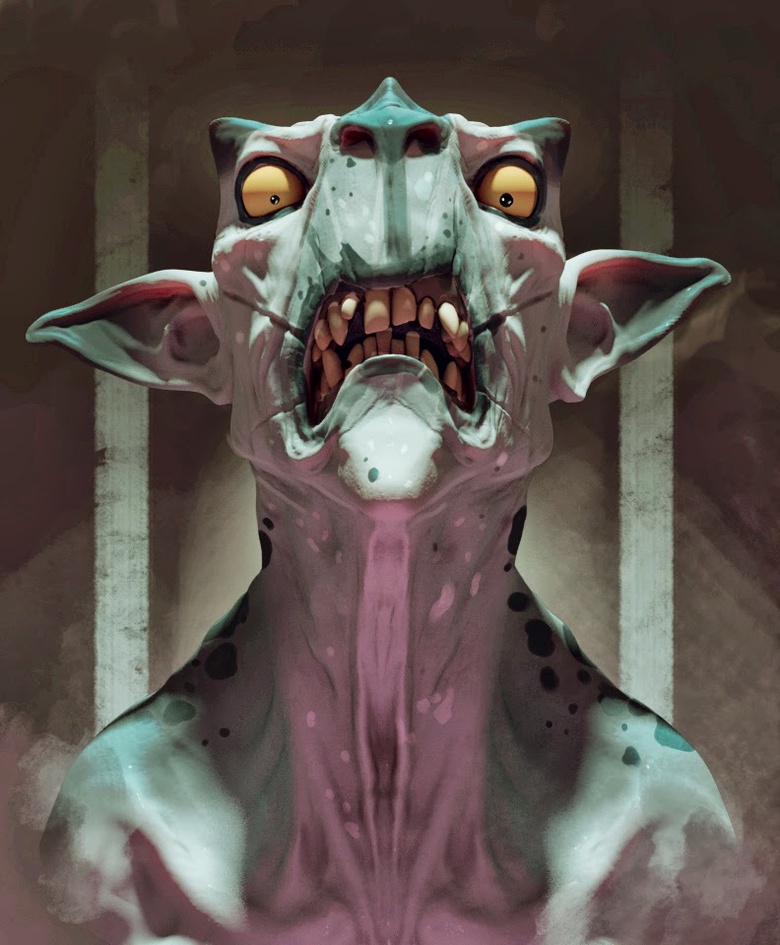 Do test renders throughout your project. It takes only a few hours and the final result will benefit a lot from it

Constantly gather reference. If you want a believable end result, a good reference library is essential. My personal reference gallery now contains more than 8,000 images. Regardless of how good your internal visual library might be, you will still benefit from good reference. Sometimes I will only get the smaller details from reference, like how the wrinkles should be, or sometimes it's an idea for an entirely new direction for the entire project. Most of the time, it's something in between though. As with everything else, good reference is a tool. If used well, it will benefit your project. 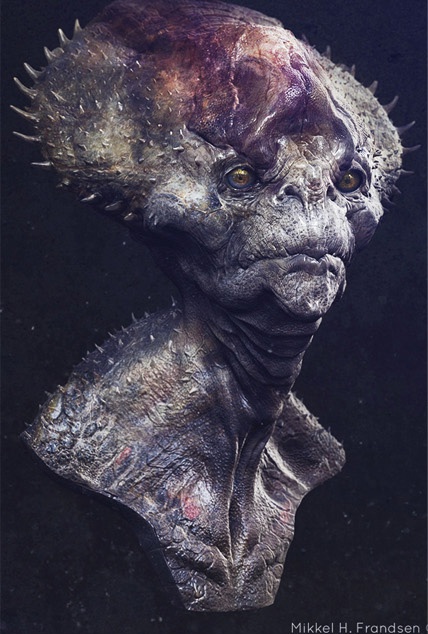 Throughout the project, remember to show it to people you trust to give you good feedback. If you don't trust people you know in real life with feedback, post it online on forums like cgfeedback. The feedback you get can have a huge impact on the final result and also keep you motivated. After you've been looking at the same polygons and pixels for days, you become completely blind. A fresh pair of eyes can be so refreshing.

That said, remember your original vision and don't listen blindly to the feedback. Always take it into consideration, but remember that it's your project and if the feedback completely clashes with your vision, you're not obliged to change it. 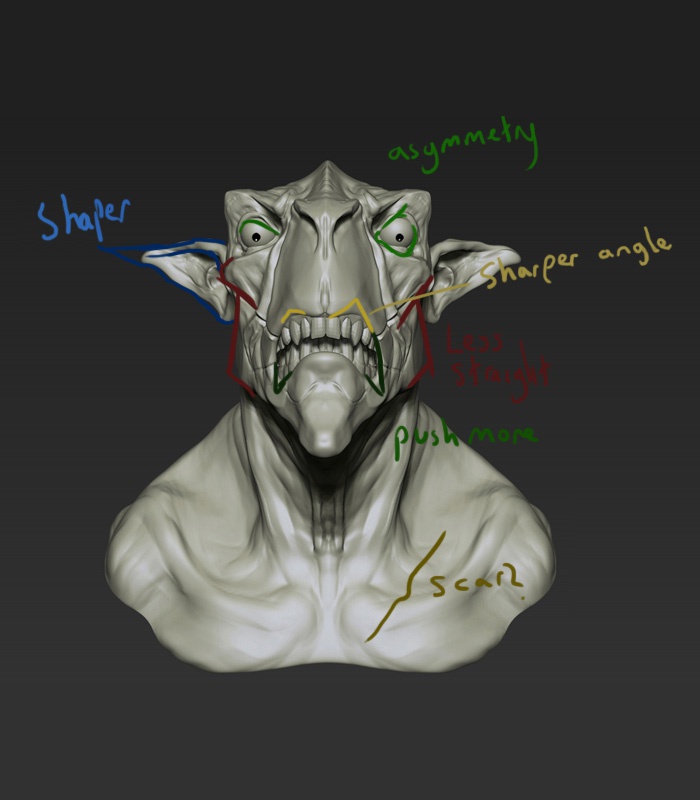 Don't be afraid to ask for feedback. Henning finds paintovers to be the best help, so if people can provide one, that's great

At this point, I had looked at a lot of references and got some solid feedback, so it was time to finalize the model! I'll spend nearly all my time sculpting using just a few brushes: Clay Buildup, Clay, Trim Dynamic, Dam Standard and the Standard Brush. They all have their strength and weaknesses.

Clay Buildup I use for the majority of the sculpting. It's extremely powerful, but it can also be hard to learn to use. I definitely recommend spending some time learning to love it. Dam Standard is also a true gem, particularly for scars, wrinkles, folds and so on. 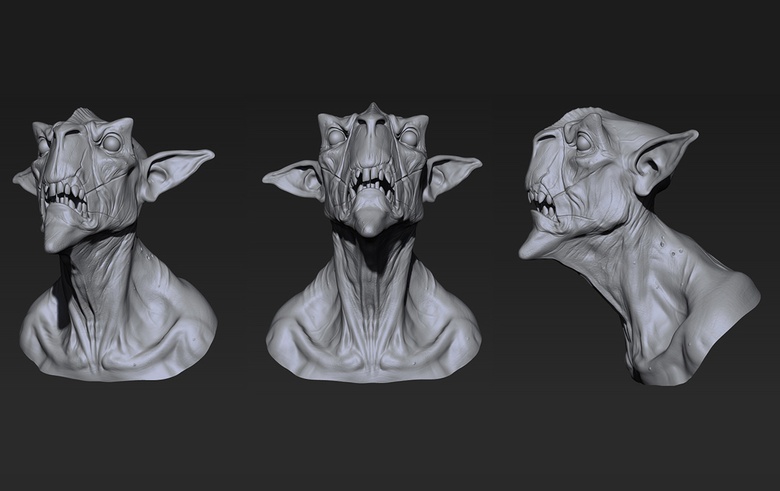 Find the brushes you like the best and figure out their strengths and weaknesses. Add them to hotkeys for faster sculpting

I highly recommend texturing in MARI, if your computer can run it and if you have the budget. It's by far the most powerful texturing tool I've ever used. I've previously used both ZBrush and Mudbox for texturing, and while they're decent, MARI is just a step above them.

I started out with a monochromatic color scheme and pretty much only think about the values, such as which areas should be light and dark, regardless of the lighting. After my values were working, I slowly started to add color variation to the texture. Color variation can really make the texture come to life and feel less CG and dull. 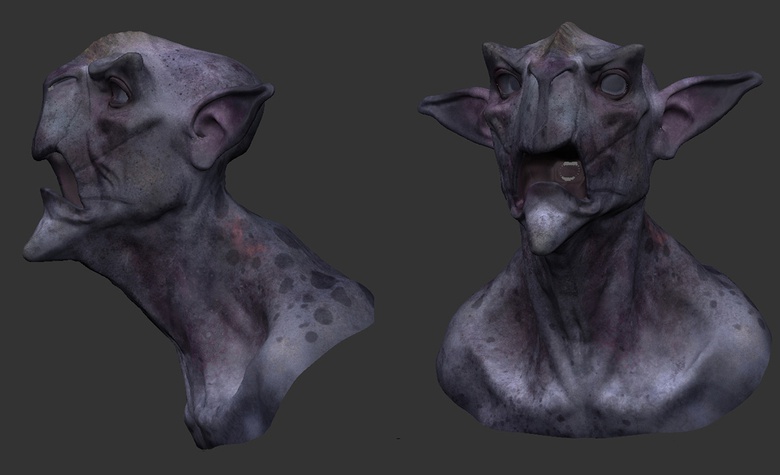 When texturing, Henning started out by blocking out the values first before adding color

I love to use MODO to render my personal projects. For this project, I used the built-in skin shader, a displacement map and 3 area lights. The previous lighting tests were extremely helpful here, as I had a somewhat clear idea of how I could set up the lights and what I wanted.

The teeth were a tad too dark, so I set up a spot light and light-linked it to the teeth-item to make it brighter. When I light, I try to think in real-world terms like a photographer, but I'm not afraid to break the rules of physics to get the result I want. 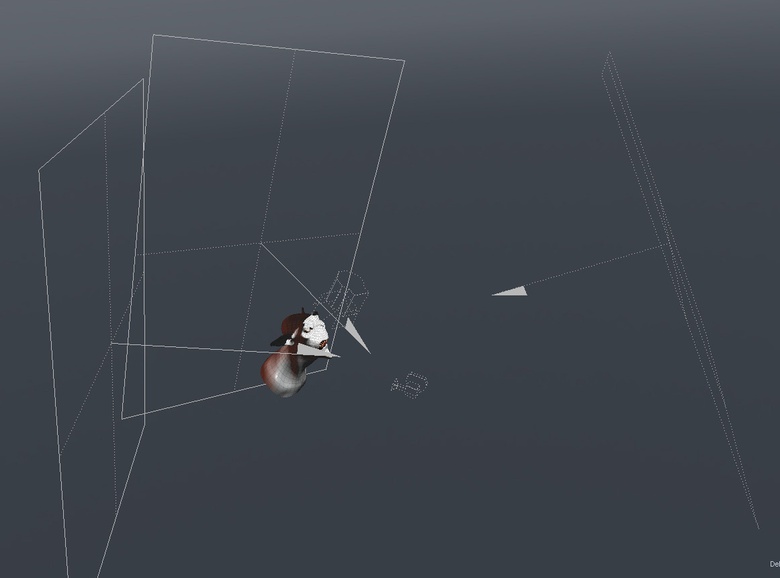 For lighting and rendering on personal projects, Henning uses MODO as it's easy and quick to get good results

Never, ever, underestimate the power of good post work in an app like NUKE or Photoshop. It can take a render from being dull to being nice, or a great render to something truly fantastic.

When working, I always do some post-work in the end, even if it's just a tiny color correction. A huge beginner-mistake is to never do any post on their renders and they assume that the image will only be as good as what they can get out of their 3D software. 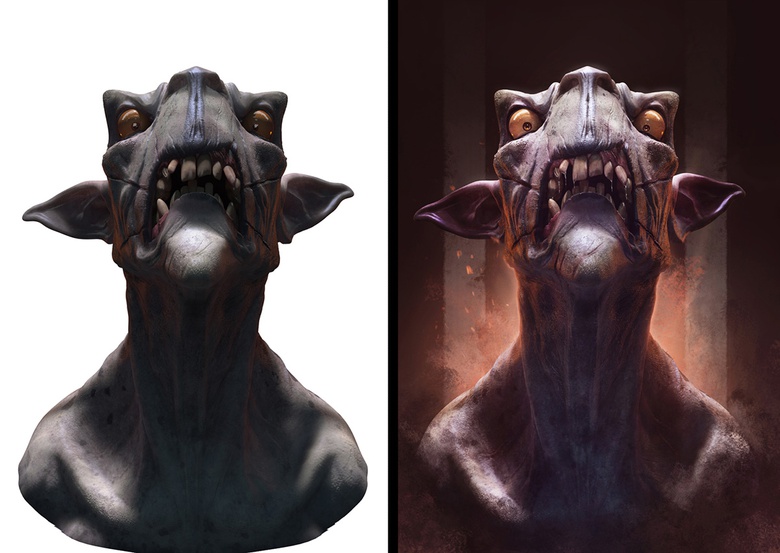 At the end of every project, Henning highly recommends that you do some solid post work on your image. It can really make a significant difference

Head over to Henning's website to see more of his work
Moody Conrad was the cover image for 3dcreative magazine issue 99
Check out our ZBrush Character Sculpting book
To see more by Henning Sanden, check out Digital Art Masters: Volume 9