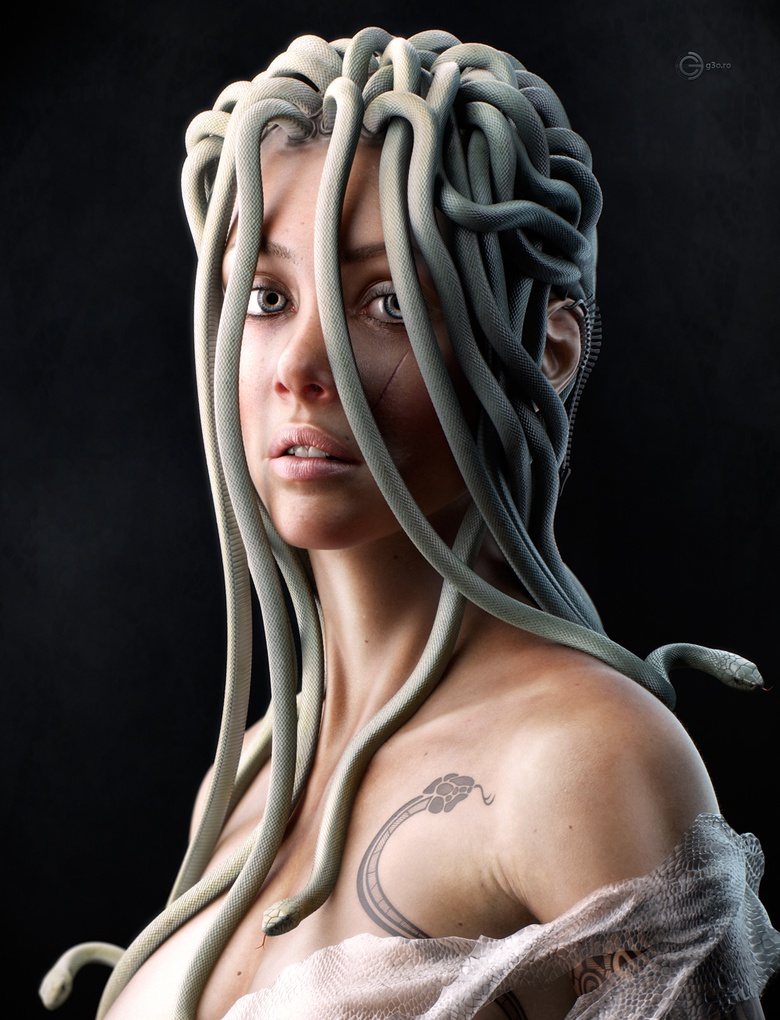 3D artist George Manolache shows you how he made the gorgeous Young Medusa in ZBrush...

Being my first human character project, I wanted to explore some new fields for me: human sculpting and MARI texturing. Besides the execution, I also had in mind a realistic concept: a young seductive woman in subtle suffering, distanced from all exaggerated monster traits.

Usually when I start a project I have a precise idea in my head. Even so, I Google a lot of references, textures, and inspiration sources for ways to improve.

My research for Medusa took me on several paths: lips, eyes, noses, anatomy, accessories, etc, and I combined them into what I thought would achieve to achieve the "beauty and the beast" I was aiming for. No concept sketching was needed.

Sculpting a woman in her twenties was a bit challenging, mainly because the threshold between beauty and ugliness requires a millimeter's precision. I had to study some anatomy references and ZBrush's Clay Tubes brush was my friend. I started with a generic pose (only the bust was created). For accuracy reasons, I preferred to do the retopology with the classic ZSphere method.

I tried different approaches for the lips and I found the most satisfying method was by sculpting on top of a projected image. This was done only after I was happy with the base anatomy of the lip. 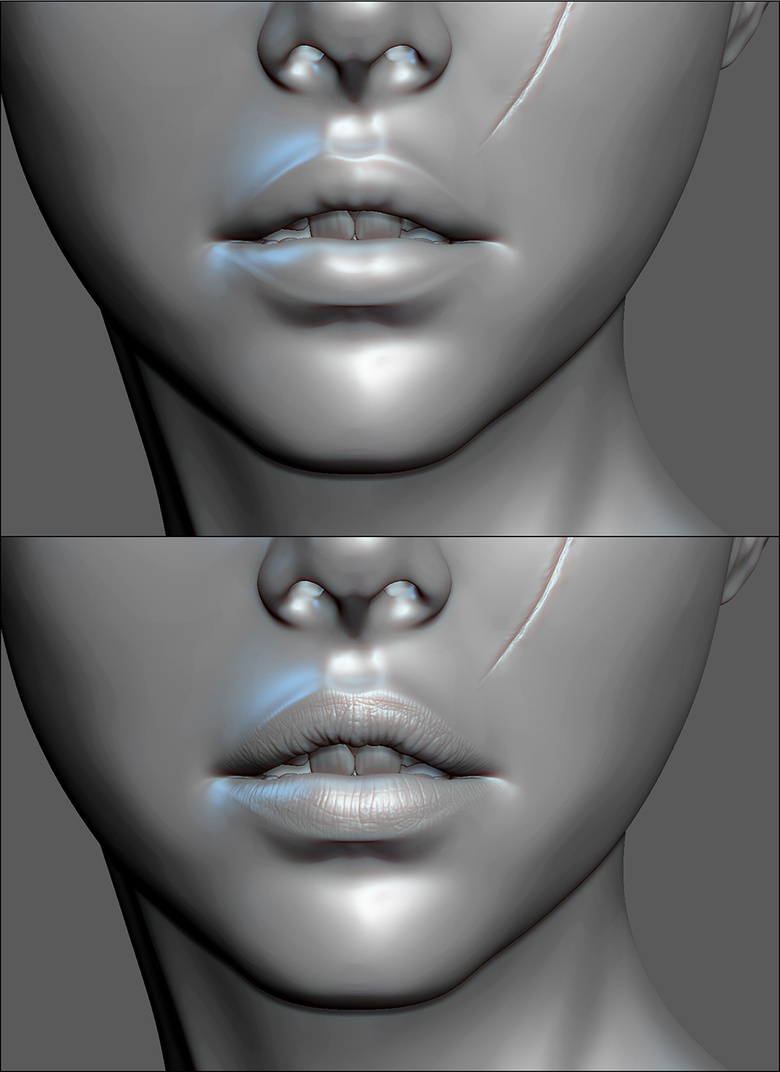 The lips before and after Spotlight projection 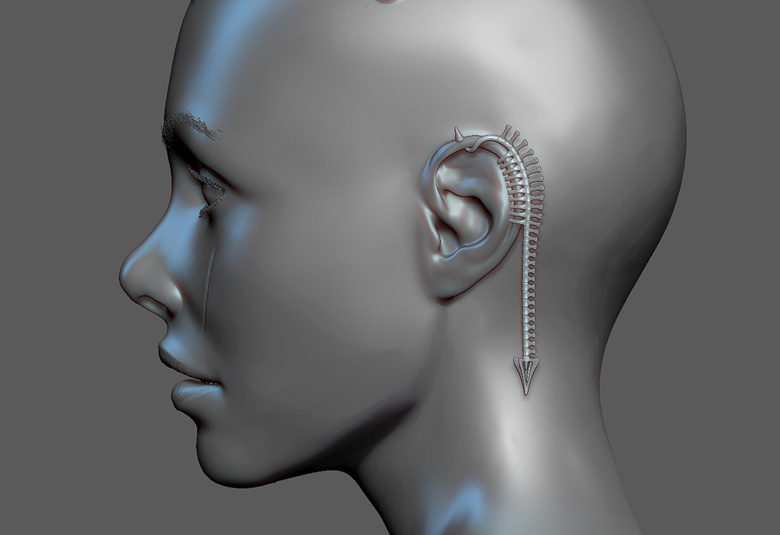 I modeled most of the body parts based on photo references. For example, I wanted the eyebrows to have a specific hair pattern that I liked in a photo, so I painted Photoshop paths on top of the photo. I imported the paths into 3ds Max as splines, onto which I applied some modeled hairs, thinner or thicker. A bit tedious, but it gave the precise result I wanted. 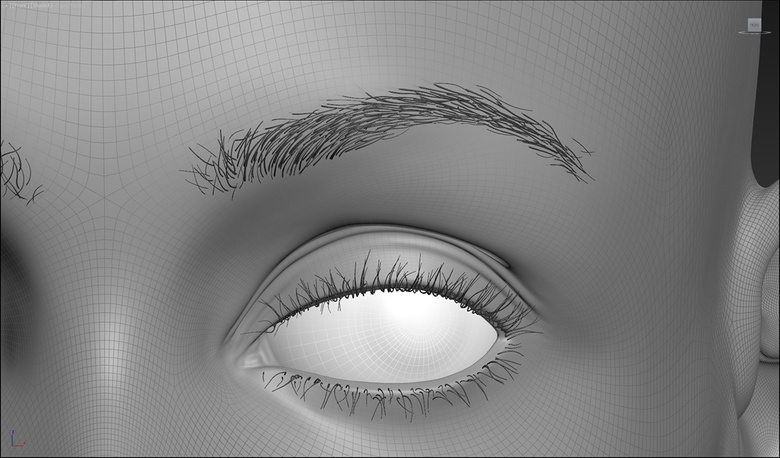 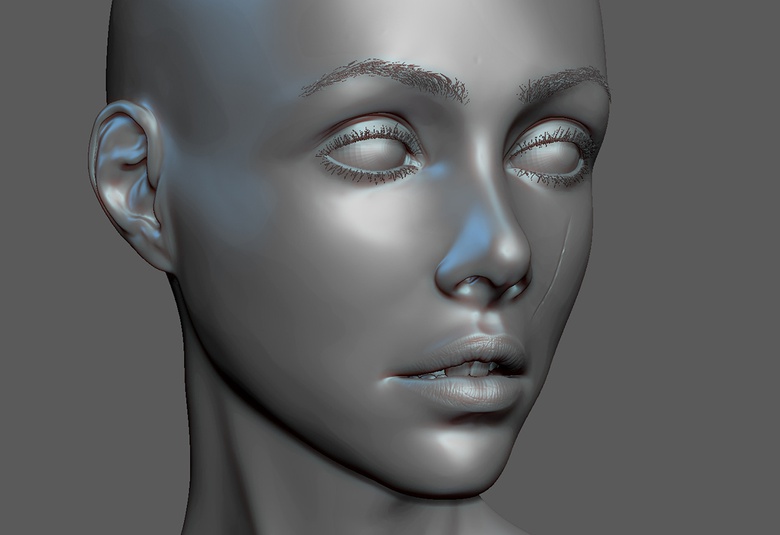 The face in ZBrush, with eyebrows applied

The snakeskin cloth began from a simulated mesh which I ZBrushed to improve the folds. The displacement pattern was a custom-painted snakeskin texture done in Photoshop. 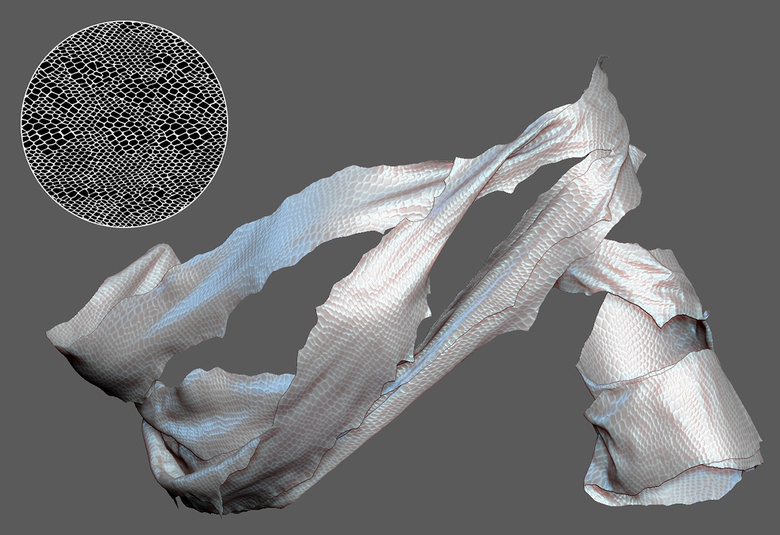 Cloth with a snakeskin texture

The snakes were modeled in 3ds Max (head and body). I started studying 3D as a hobby in 2004 and used it as a tool to illustrate one of my passions, automotives, so I guess my earlier hard-surface modeling experience played a role here. For the head I created the overall volume, cut several scale shapes into it, then beveled and adjusted. For the body, I created a single scale with a small polygon count - I preferred to have geometry instead of using displacement. I cloned the scale 16x17 to create a surface, made some subtle variations on them for realism purposes, and then patch-deformed them on a quad patch with the snake's body shape. Then I could clone this segment to make the snake as long as I wanted. 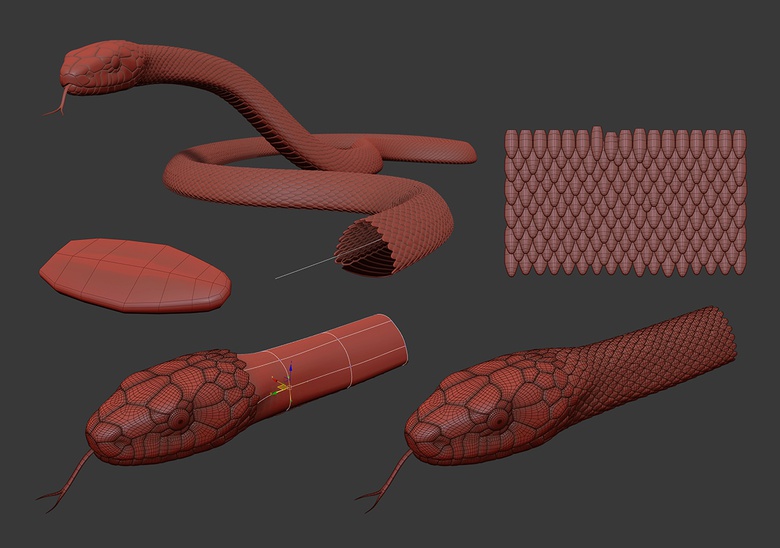 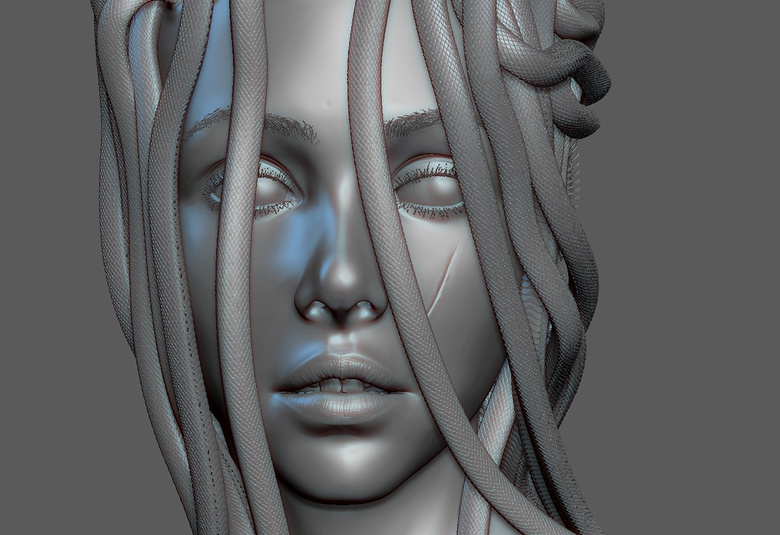 MARI's procedural noise helped a lot to improve the textures, especially on the body. The diffuse map (4k) is based on skin photos cleaned of reflections and shadows in Photoshop. The SSS map is mostly the diffuse map with different saturation or hues in some areas. 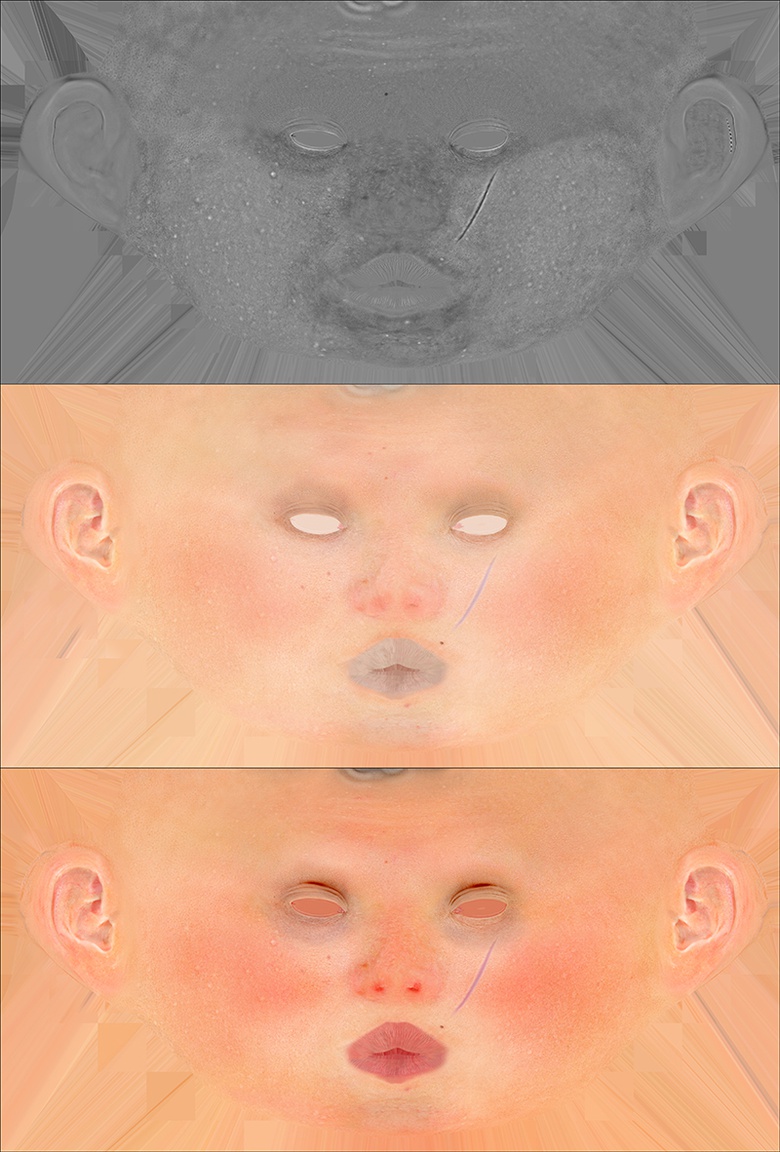 The displacement, diffuse, and SSS maps 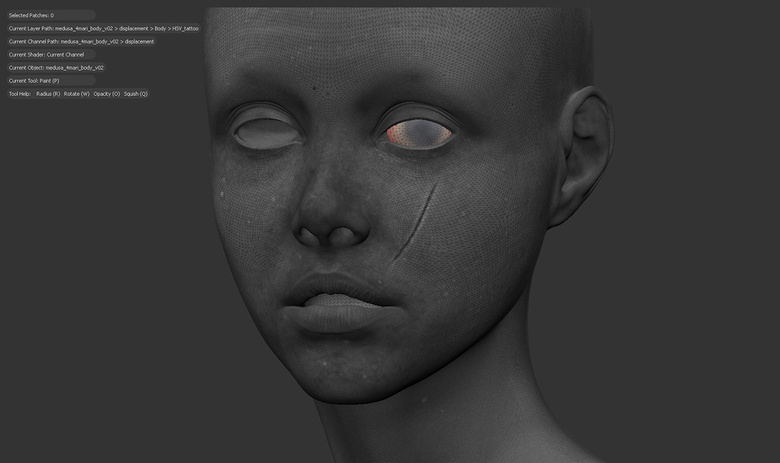 A closer look at the displacement map 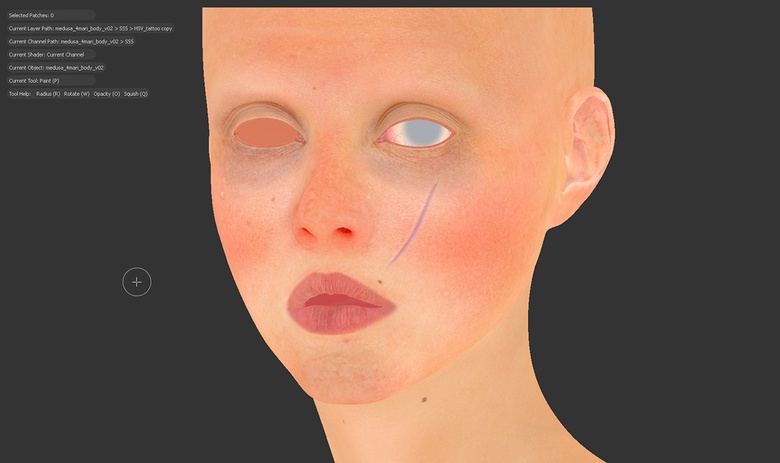 The SSS map applied to the model

I used a basic three-point lighting setup in V-Ray, with Gamma 2.2 workflow and multi-channeled EXR output. For stills I often prefer to render more than one shading setup and combine results in post-production rather than create separate maps such as reflect or glossiness. With these and V-Ray elements, I had the adjustment control I needed. I also prefer RGB multimattes over the wirecolor element for better masking purposes. 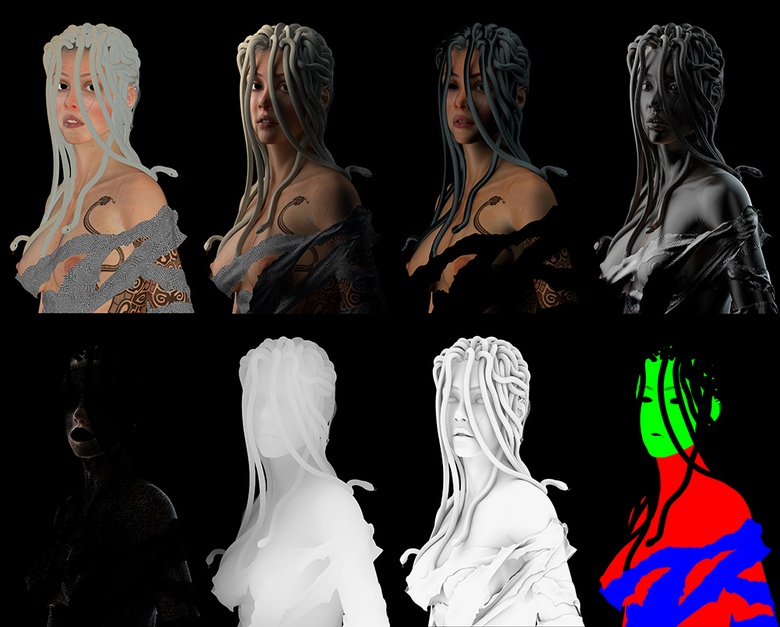 This took some back-and-forth work between Photoshop and NUKE, but not as much as I do in the case of an automotive project, where I tend to paint and correct render elements before compositing. I mainly worked on top of the render in Photoshop. The final output in NUKE consisted of some minor color corrections, chromatic aberration, depth of field, glows, and sharpness, which of course in some cases could be made in Photoshop as well. 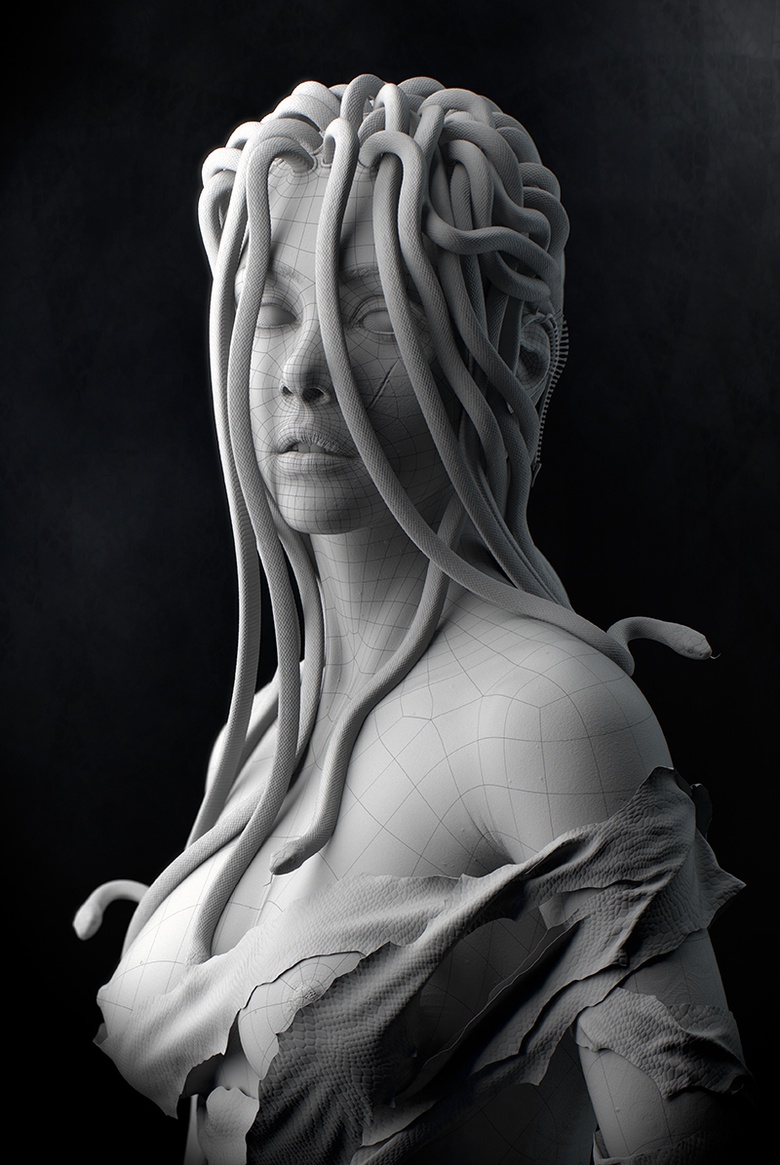 The wire view of the final model

The first steps into something new are always the hardest, but perseverance helped me to exceed me projects first results, which inevitably were poor. So I don't embarrass myself, I will not show you those, so you'll have to take my word for it.

The final image after compositing and post-work

Check out George's website to see more of his work
Want to learn ZBrush? Then have a look at our Back to Basics: ZBrush - part one
Follow 3dtotal on Twitter