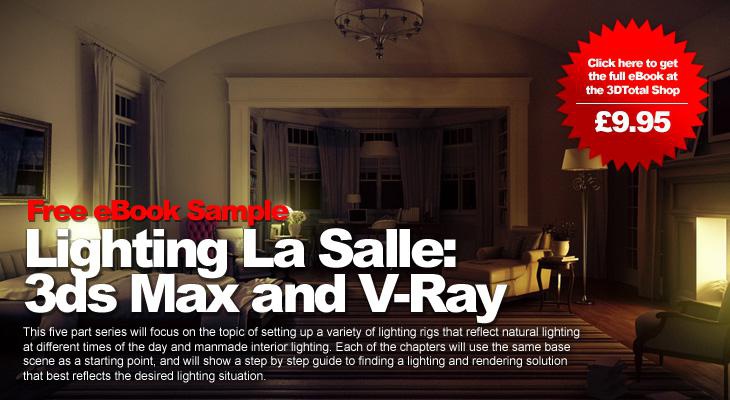 Please note: This eBook includes free resources, which can be obtained by purchasing the full product by clicking the banner above.

Greetings everyone! I would like to thank you all for reading this tutorial and I hope you will find it useful if you are looking for some tips on interior lighting. Since this is a part of a series I assume you have read the previous parts as well. All together there are three night-time lighting schemes and this is the final and yet most exciting one, as it has a romantic lighting theme.

As I said, I presume you have read the previous chapters of this tutorial and so I will start with my bright, overcast night-shot scene. Let us analyze to begin with and lay down the guidelines which we will be following!

The first thing that has to be strikingly different is the amount of light in the room (Fig.01). One thing is for sure: the light on the ceiling will have to be turned off. We want to create an atmosphere in the render that would exist if we were on a date in this particular room in real life, and for that we probably wouldn't need the main light. So lights 1 and 2 get put out (Fig.02)! 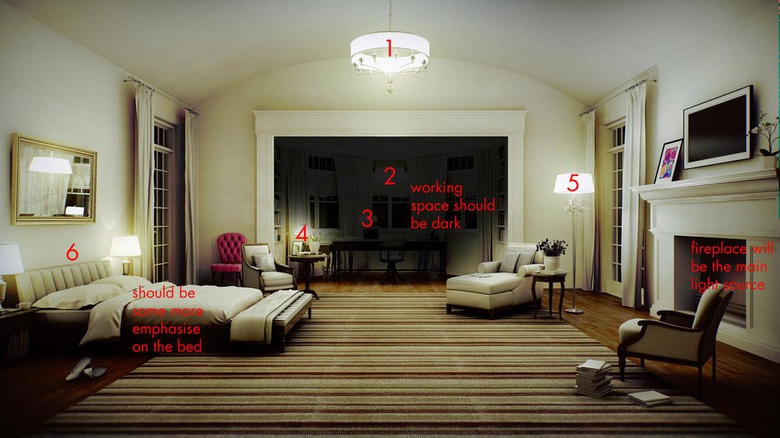 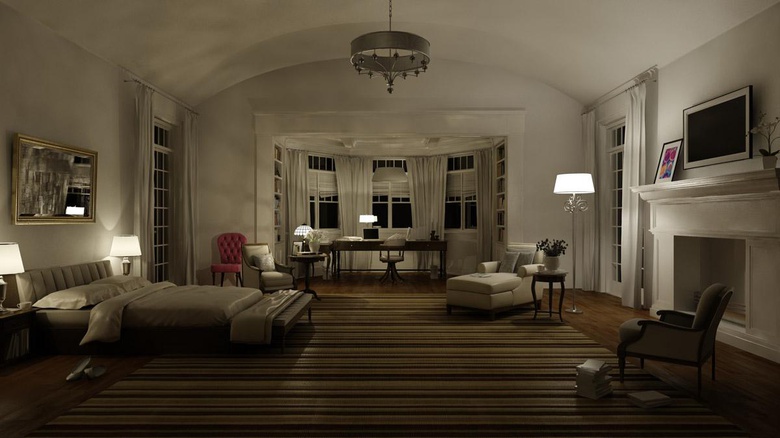 We have four more light sources left in the room (I'm counting the lamps numbered 6 as one) and we know we won't need that many for our date night. So let's see what else we don't need. Well it will obviously be the ones in the back. That is because of two things: for one thing it looks like a working space and we would definitely not want to concentrate on that. The second reason is because the darker the room is the smaller it feels, and our goal is to make this space as cozy as possible. Bottom line: lamp number 3 is out.

There is one more light I'm not really comfortable with and that is the standing lamp (number 5). Whenever I look at that I instantly think about a middle age or an older man sitting under it with his glasses on reading a long book. And we don't want that association with this space and scene! So away with that too!

We're down to our last two lights, numbers 4 and 6. So let's check how it looks like as it is now! But before that, let me show you my render settings for test renders. Whether it's an exterior, interior, night or daylight shot, I always use these settings for test purposes (Fig.03). I put the shadow subdivs to 6 at this point for the light sources.

And so here is the first test render. Please excuse the test render quality, but it is totally sufficient to see the lighting. What I can see now is that the lighting is anything but romantic. It looks more like a bedroom of a wealthy couple at the end of a long tiring day of work (Fig.04). So let's start playing with the settings a bit. 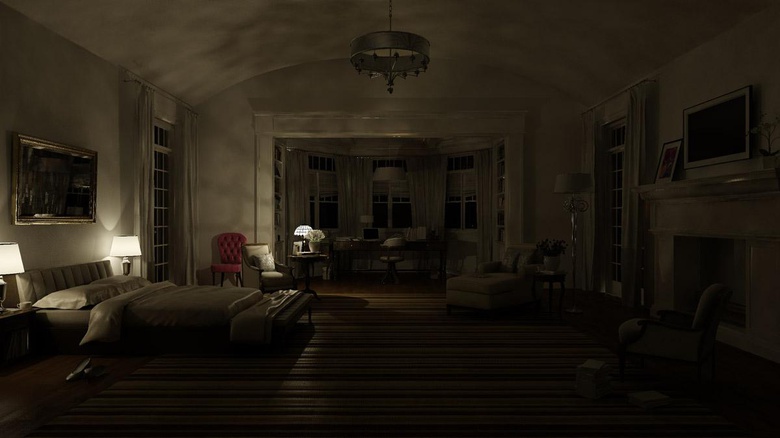 First I would like to use the Linear Exposure control here instead of what we have been using so far in the overcast night shot, which was Reinhard. With this we will be able to reduce the overall light in the room without having to sacrifice the burning brightness effect near the light sources.

Now let's have a closer look at our light sources: they are V-Ray light spheres. We can see that number 4, the Tiffany lamp, causes some nice sharp shadows on the walls and it was a nice feature in the earlier scene but now I don't think we need it. I find it a bit distracting and I would like to see much smoother shadows. So just replace this small radius sphere with a normal V-Ray light sphere by copying one from lamp number 6. No Instance this time because later we might want to handle them separately.

Let's reduce the light drastically by bringing the Multiplier down to 300. Let's see what we get now (Fig.05). It is really dark but I like it because these lamps have only one purpose and that's to light the areas very close to them. But just for some more fine tuning: let's make light number 6 a bit less bright (200) and number 4 a bit brighter (500). Because by now it is, I guess, clear to everyone that we will introduce a completely new light source in the scene to serve as our main light source: the fireplace. 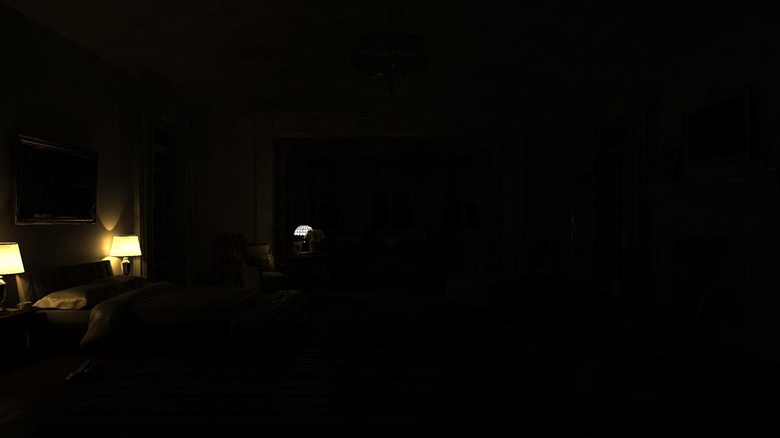 How could you leave that out of a romantic scene?

So we will do this by putting three V-Ray light spheres in the fireplace, scattered in there randomly (Fig.06). And render a final test (Fig.07). 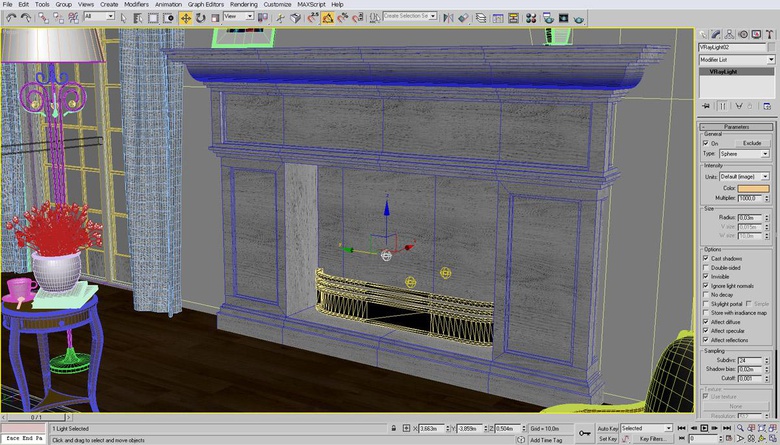 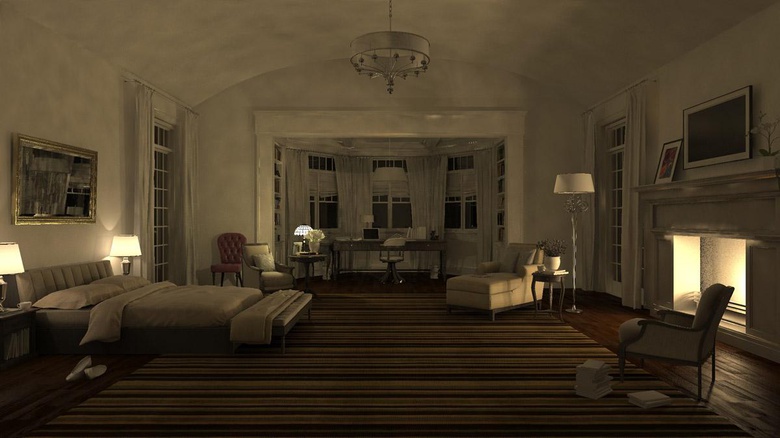 Now it's time for the final settings and then it's ready to be rendered properly (Fig.08 - 09). 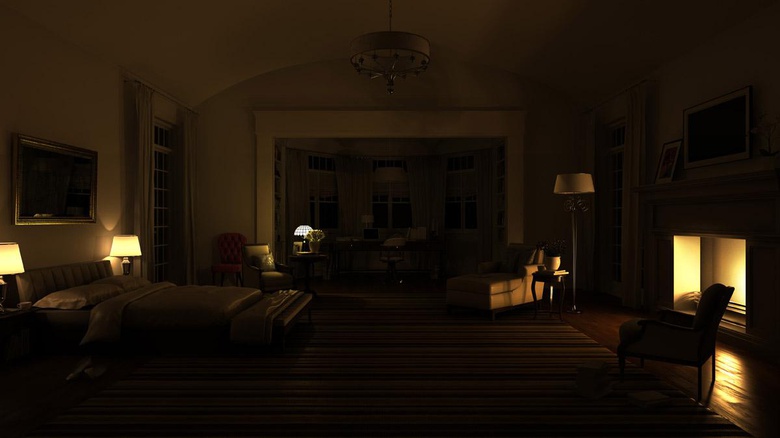 And after some Photoshopping, the end result looks like this (Fig.10). I think it's satisfying enough. Who could resist this atmosphere? 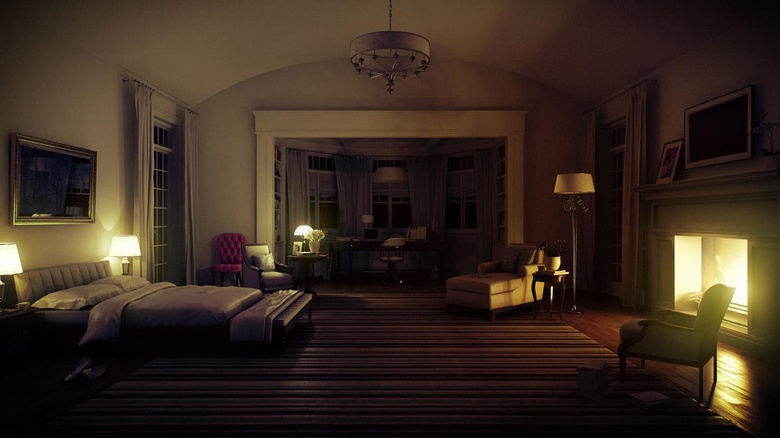