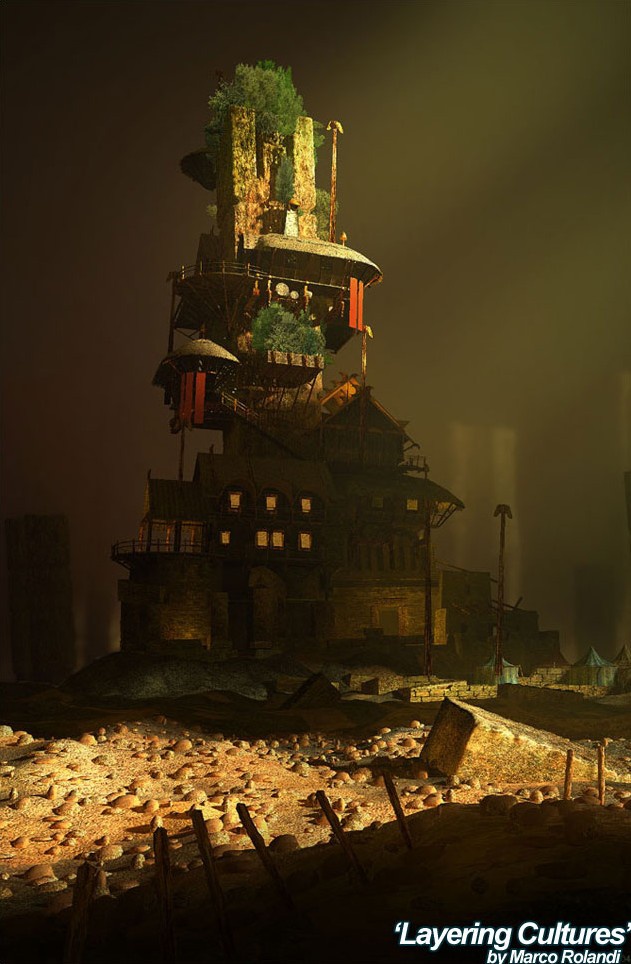 The purpose of this tutorial is to create a scene using most of the textures contained in cd number 9. Examining the content of texture cd, you'll soon realize each own "civilization" solved the same problem into different ways, using very different materials. Some used stones, some wood. Even when the material is the same, each own civilization used it in different ways. Wood for example has been nailed, cut in planks or used as trunks. For the sake of this tutorial we'll split the textures into two main groups: one labelled "lithic cultures" and the other labelled "wood cultures". We can then split the two groups again sorting the different textures using a chronological criteria. Let's use some imagination now. Let's pretend we want to use lots of these textures in the same scene to experiment a lot. We'll make some sort of "sandwich scene" especially for this tutorial in which all the different cultures get superimposed one over the other. This process is quite common in places where periods of prosperity and crisis follow one after each other. In the real world we'll have clear examples in the majority of europe (mostly in Italy and france), and India.
Back to the textures, we'll ignore the most ancient wood culture (due to the fact that wood in reality doesn't last too much) and use one of the ancient lithic civilizations as our base layer. We'll add one more lithic culture later on and then a wood/lithic culture in the end. To summarize, we'll have the following set:

We now have a more precise idea on how to use how textures and where:
For the most ancient civilization we'll need dull, consumed textures representing large monolithic blocks and few ornaments. We'll use the same textures for any ruin or rock in the environment as we suppose (but we might think otherwise if we like) that the large monolithic structures originated from materials on site.
In practice we'll use the same textures/hues/colours for the ancient structure and the rocks nearby.
The second lithic culture will be characterized by a different set of textures. We'll retain the same colour as the previous (again the material is found on site or salvaged from the ruins) but as we assumed that this second culture originated as a result of degeneration of the previous one, we won't use any ornaments and use wall textures that present a smaller size in blocks (larger blocks mean better technology for both carving and moving/assembling the rocks).
For the sake of experimenting let's pretend now that the world turned dry, and the only water left is the one that gathers in the recedings of the ancient structures (that's a bit of a stretch I know) We'll build our last civ right on top of these structures, assuming they used the wood from the rare plants growing there. Having the water in a dry world gives a lot of power so we'll assume these guys ar pretty rich. The choice for our last layer would be wooden and textile textures, both colorful and encarved with ornaments.
Now that we have made a choice of texture we'll have to examine the scene in order to understand where the texture should be placed, which textures can be used without modification and which need to be tweaked in order to fit the entire picture.

Since we stated our fantasy world turned dry, we're supposed to create a desert of some sort. In order to make the picture more interesting and give more detail to the image itself a few elements have been inserted as well. 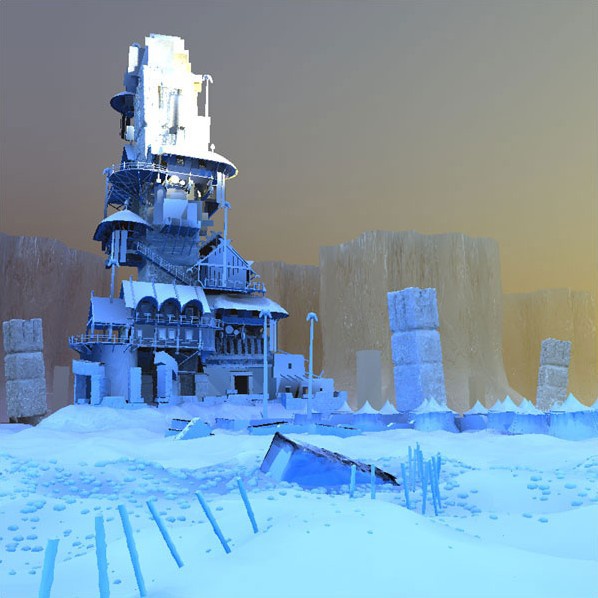 How this elements interact one each other?
First we have the base material. We'll make a mix of fine particulated sand and some dark gravel. The sand is lighter and carried mostly by wind, forming a thin layer over the gravel. If we imagine some sort of wind coming from one arbitrary direction (in our case the right of the image) we'll have to create zones in the dunes (the protected side for example) where the sand has been carried away and zones where it accumulates. This is valid for the other elements too: each object casts a "shadow zone" where the sand is not present. A very simple method for obtaining such a map is to make an high resolution rendering of the scene with a radent light using an area-shadow to obtain the required smoothness. In the example below 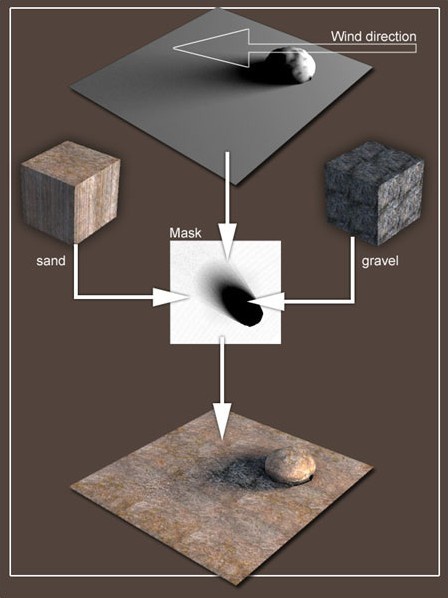 a rock creating an area without sand is procesed in the same way. From a top render view (with objs occluded from camera view) a render is created and then tweaked in photoshop (find edges plus a copy of the same layer on multiply 50%) and then used as a mask to overlay two different materials. Take notice that the sand material (right of the picture) is already a mixture of two different materials: one bitmapped and one fractal (visible on the side of the cube).Now that we have the basic material set up, we'll want to add markings, roads and dirt. We can choose to add a second material to represent the dirt or, if the enviroment plays a secondary role in our scene, simplify the procedure by using the gravel we already prepared. When adding dirt to the image keep in mind that dirt is produced everywhere near the settlements, lurking in corners and along pathways. In clear spaces dirt would be covered by the sand, therefore you should tweak your mask accordingly. 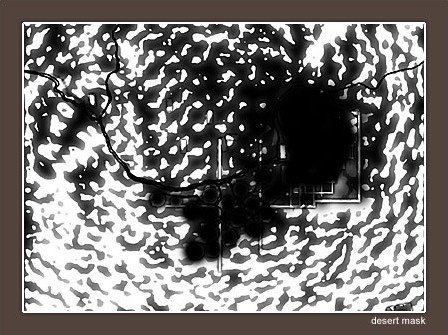 Approaching the first civilization, we create some huge monolithic structures and try to texture them with consumed, carved bitmaps. In order to do that we create a huge map for the monolithic structure and we then overimpose a second material in order to create eventual dirt. If we have the need to have more detail at this stage, instead of creating a unique map for the object we should create a mask instead and then use it to overlay different and more detailed materials. 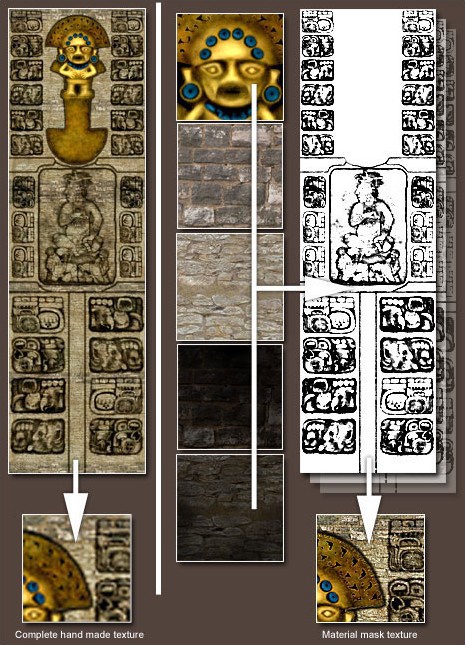 When choosing the kind of texture to create keep in mind the following facts:

The decoration I used comes form some maya and aztec patterns contained in the texture cd.
We use the same texture for all the columns in the scene, using distance and lighting to hide the fact that the texture is repeated.
Moving to the second civ, we'll use a combination of plain textures for the walls with a new vertical gradient material in order to blend the walls with the surrounding sand. As we said before, we won't have any decoration at this stage, and use mostly plain rocks. as we said before, the argument "complete map" VS "different materials + mask" can be applied to this case as well.
The last civ. is characterized by the use of wooden textures.
We create two different sets of buildings. The first one resembles some asian-kind of structures, both the walls and roofs consisting of nailed panels. The second set includes some nordic-type buildings with straw roofs and a wooden structure underneath. In both sets the wooden structure is built upon a stone one used to contain the fireplace. Extensive use of layered materials was added in order to include effects like weathering, dirt and to add more variety to the overall scene