3D art director Gregory Stoffel continues the Know the Basics: ZBrush series by bringing all the render passes from KeyShot to Photoshop to create the final image... 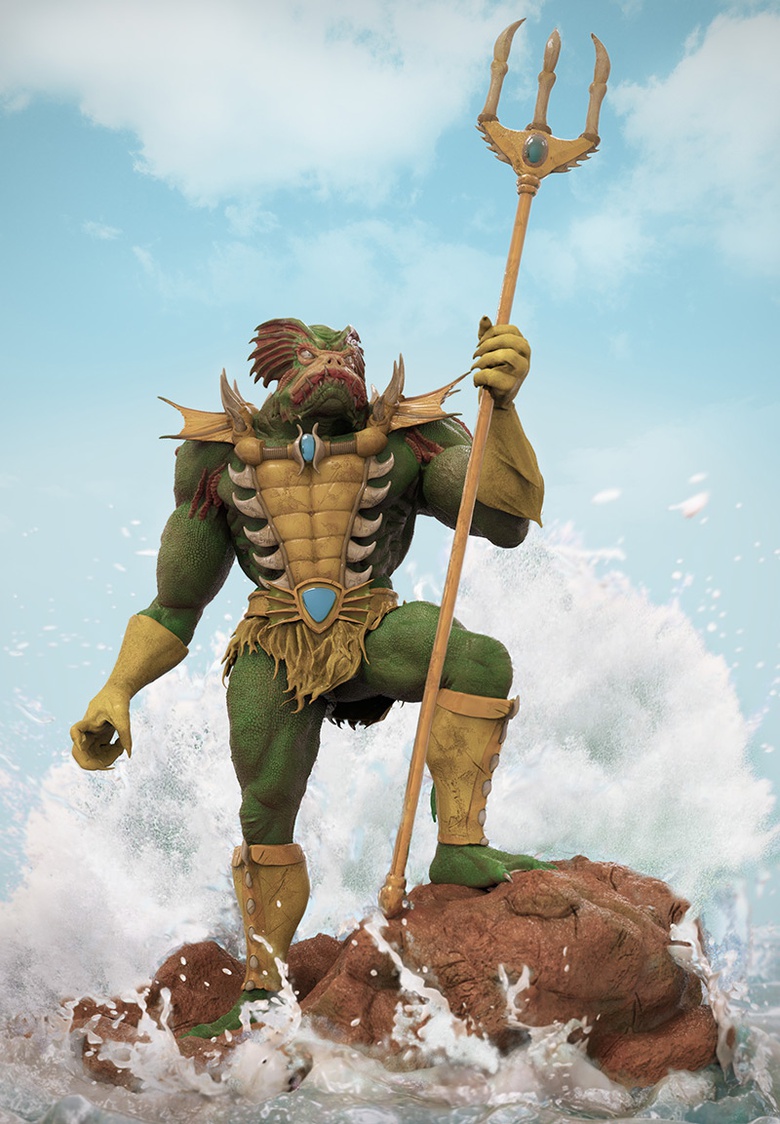 3D art director Gregory Stoffel continues the Know the Basics: ZBrush series by bringing all the render passes from KeyShot to Photoshop to create the final image...

Following the previous tutorial where I rendered the different passes of my characters, I will now show how I have imported all these passes into Photoshop to composite the final image.

Step 1: Importing all the render passes

To import all the passes at once in stack, go to File Script - Load Files into Stack... Load all your passes by pressing the Browse button and all your passes will be on different layers in one stack. 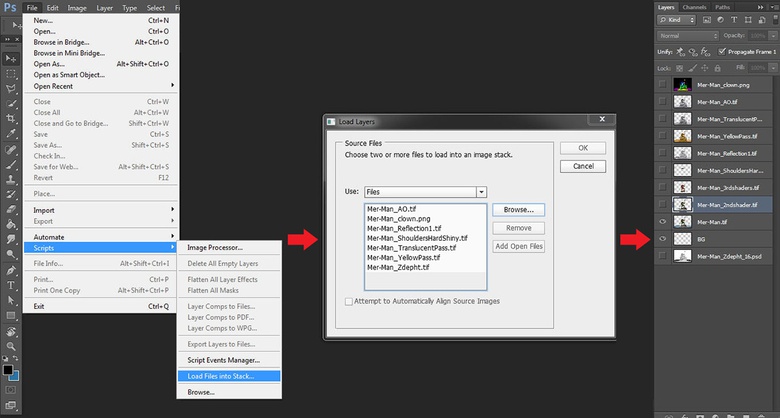 Importing all the passes into Photoshop in one stack 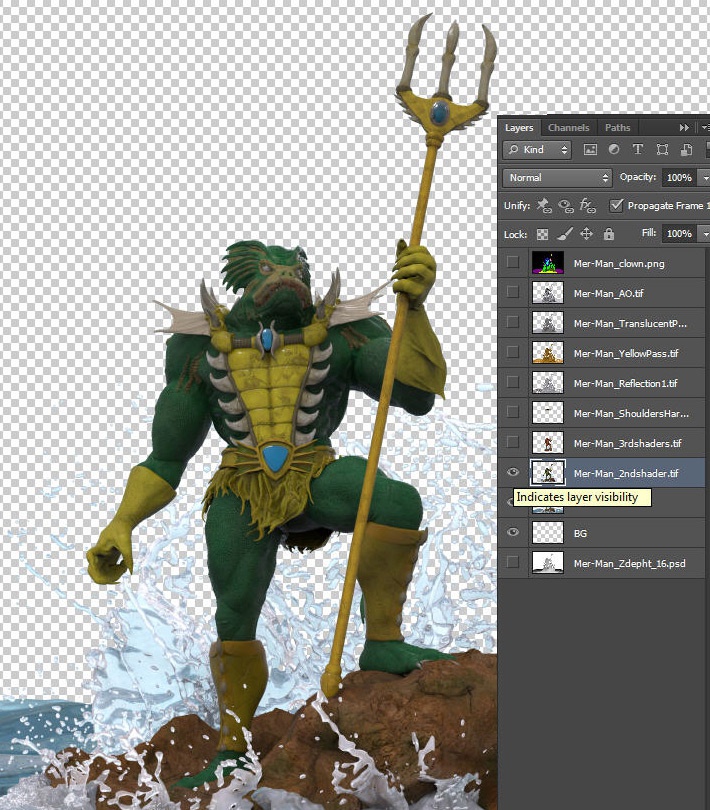 Additional passes to change the materials of some parts

Although I rendered the skin of the character with a translucent material (Human Skin2), I wanted to multiply this SSS effect a little more by adding a red pass of the character skin (Soft Rough Red material). I put the blending mode of this layer to Linear Dodge (Add) and its opacity to 10%, it has a very subtle effect. 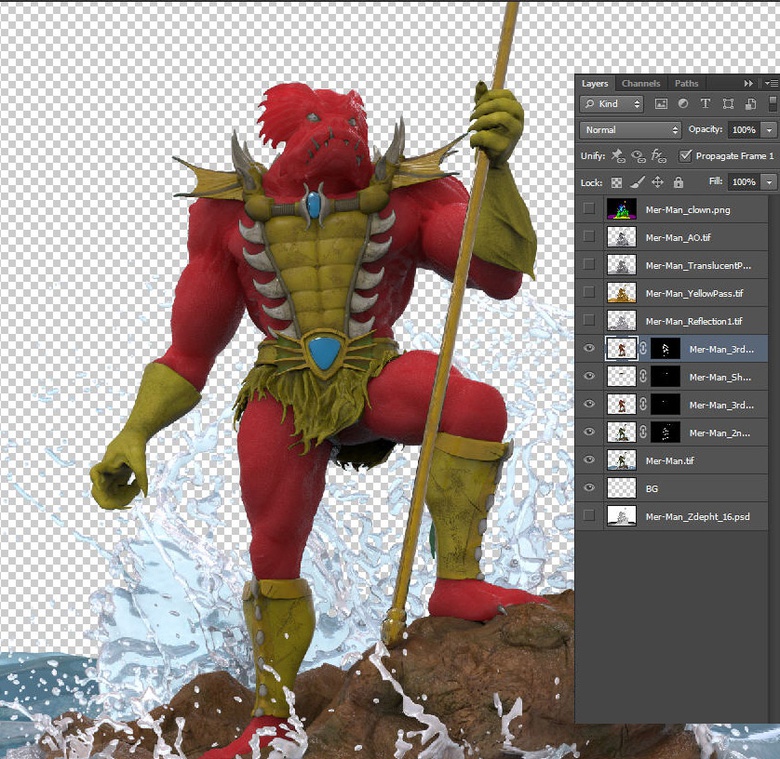 I have composited the 4 main passes that I rendered separately from KeyShot, and changed their blending mode and opacity to achieve the result I was looking for.
- Reflection pass: Soft Light 38% opacity
- Yellow plastic pass: Soft Light 50% opacity
- Translucent pass: Soft Light 65% opacity
- Ambient Occlusion: Multiply 20% opacity masked the water out, and I added a Curves adjustment layer to make the AO pass a bit lighter 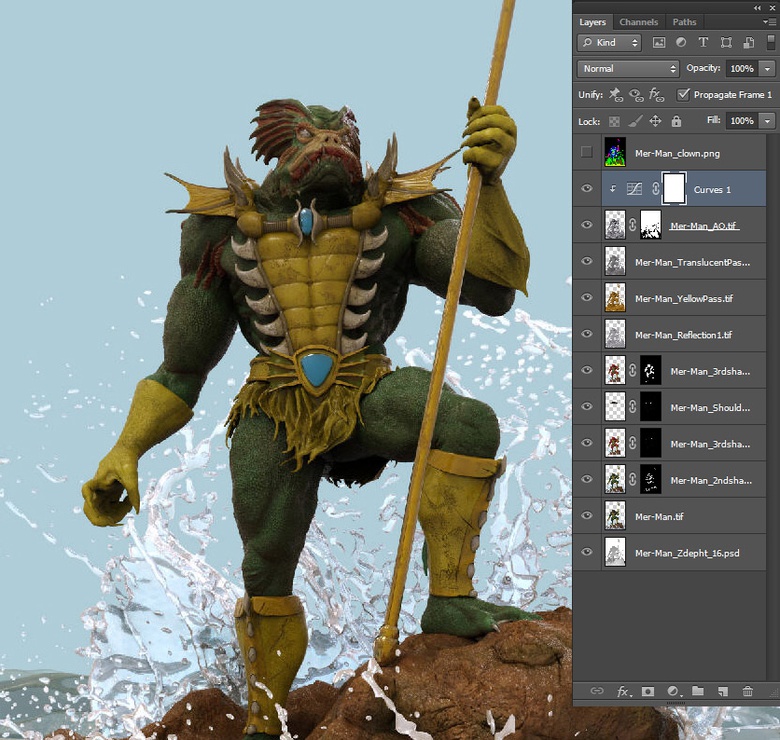 Step 5: Composite photo in the render

I have found a wave crashing on a rock in Google and composited it behind the character using a mask. I changed its blending mode to Lighter color, before merging these layers (Ctrl+Shift+Alt+E) and using the Smudge tool to add some motion blur, as well as blending the photo and the 3D water together. 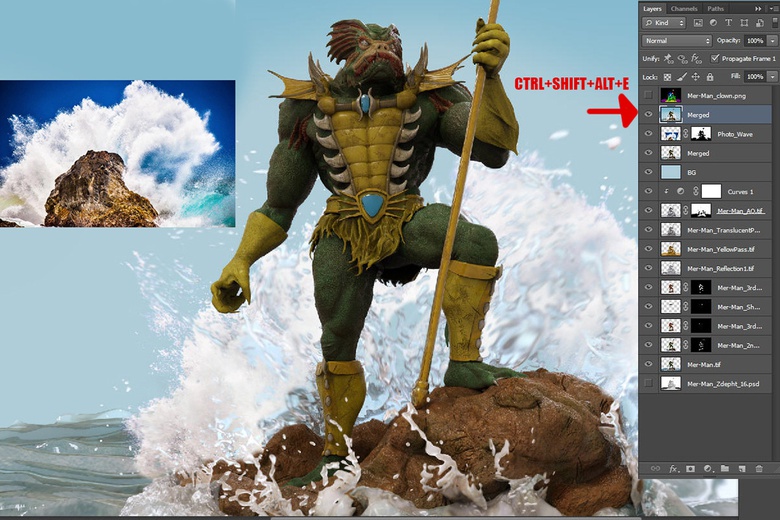 Compositing a photo behind the character to create the crashing wave

After compositing all the render passes, it is time to add some adjustment layers to modify the exposure, colors and contrast of the image. I have also added a slight dodge layer to lighten some part of the character by filling a layer with 50% grey and changing its blending mode to Overlay, then painting the area I want to lighten with the Dodge tool.

I merged all the previous layers (Ctrl+Shift+Alt+E), then put the depth layer rendered from KeyShot in an Alpha channel and applied it through the Lens blur filter found in Filter Blur - Lens Blur. It's a subtle effect in this image but it helps blend the character with the background. 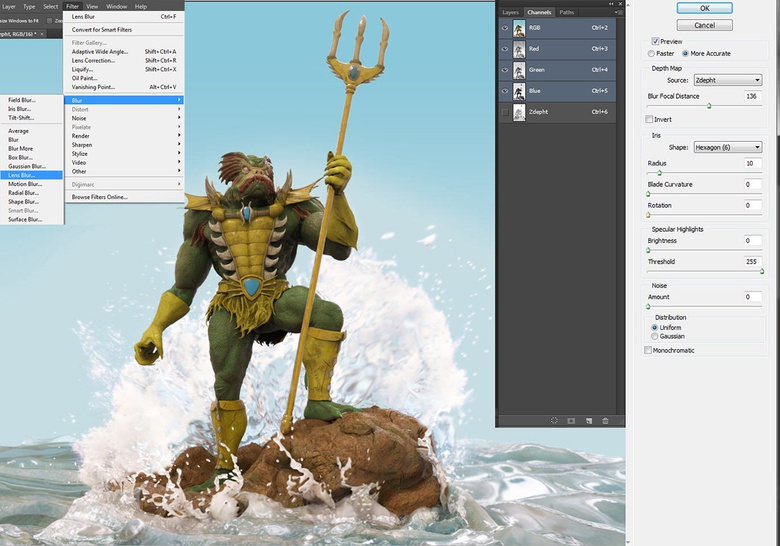 The next step was to crop the image to have a better composition and to add a slight vignette effect to focus even more on the character. To create the vignette, just go to Filter > Lens Correction, then go to the Custom tab and find the Vignette settings below the Chromatic aberration sliders. I have made the Vignette pretty strong in the filter window so that I could adjust its strength easily with the layer opacity. 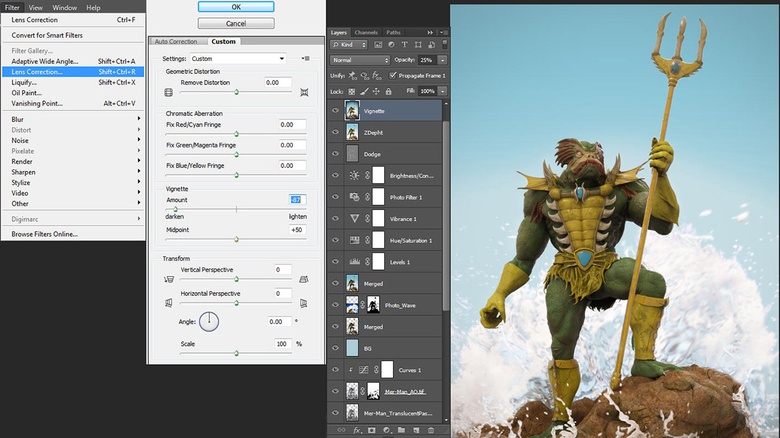 Step 9: Adding clouds and adding texture to the wave

To finish the image, I have added a cloud layer, and put it under the Vignette layer. I put it behind the character and the water using a mask. I have changed its blending mode to Overlay and added to it a Hue/Saturation adjustment layer to blend it with the rest of the image.

I have also added additional water textures to the crashing wave to show more details, and added a Brightness/Contrast and Hue/Saturation adjustment layer to blend it with the rest of the image. This last step finished my fan art of Mer-Man. 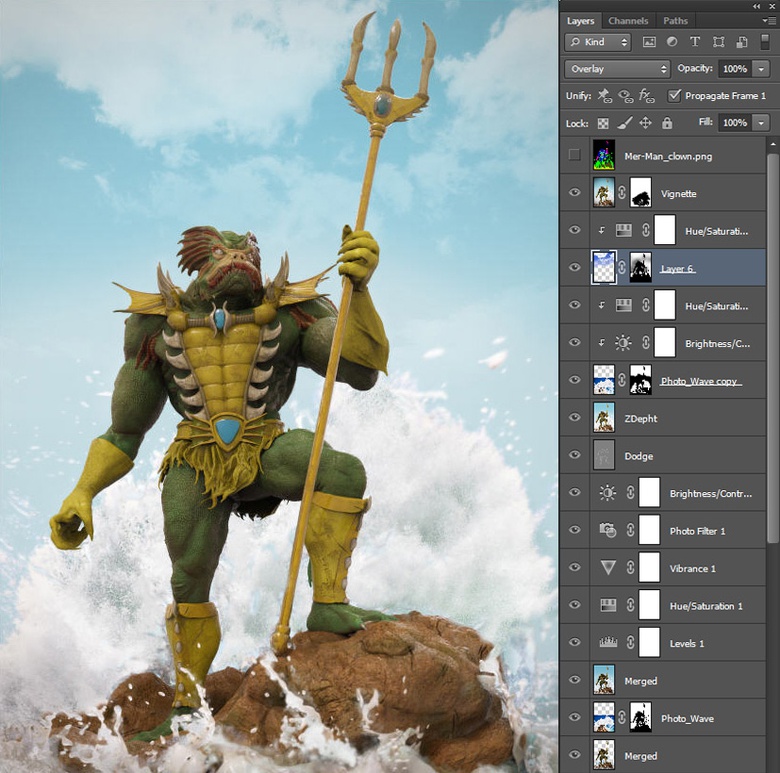