Today we're going to take a look at Color Grading and how we can use it to create a bespoke style for our videos within After Effects...

Today we're going to take a look at Color Grading and how we can use it to create a bespoke style for our videos within After Effects...

Color grading is the process of take the color of our footage and adjusting its color values. This process can be used to ensure that the footage accurately represents color as seen in the real world, or it can be used in a more stylized manner to create a more emotive style which is not necessarily rooted in reality. We'll explore some of the tools After Effects gives us to do this color grading.

Step 1: What is color grading?

Color grading is the process of adjusting the colors in your image to either make them more true to real life or to create a certain mood in the video. An example could be to communicate fear or danger using cold tones such as blues. Color grading is an art in itself so this introduction will be incredibly basic but it may give you a taste for it and a desire to pursue it more actively. 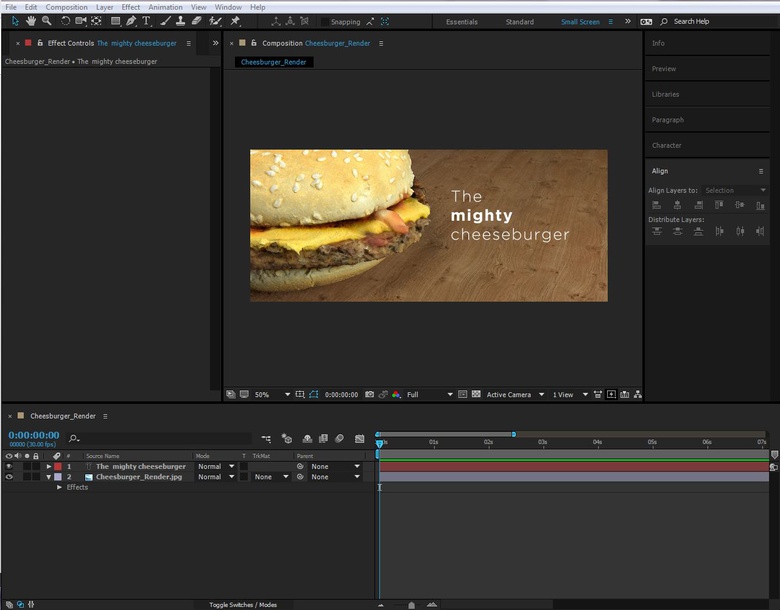 Use color grading to adjust the colors in your image

After effects ships with a load of color correction tools which can be used to grade your footage. One of the primary color correction effects is the 'Curves' effect. You can use this to adjust either the image as a whole or to adjust the red, green and blue wave lengths individually. 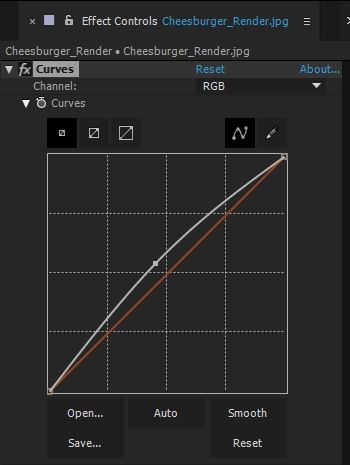 There are other effects such as 'Color Balance' which lets you affect the contribution of red, green and blue to the shadows, midtones and highlights. This provides precise control because in color grading you will rarely want to color correct the whole image at once. Usually you'll want to put some warmer tones in the shadows and some colder tones in the highlights for example. This effect lets you do that. 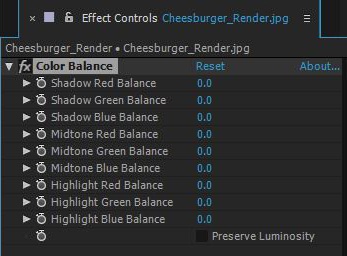 Now up steps Color Finesse by Synthetic Aperture. This is an external plugin which gives you a wealth of tools and diagnostics to be able to more extensively and accurately color correct your footage. To apply the effect simply select your layer and apply the effect. The 'Effect Controls' window will give you access to the 'Simplified Interface' but you'll more often than not want to click the 'Full Interface' button to open up all the options. 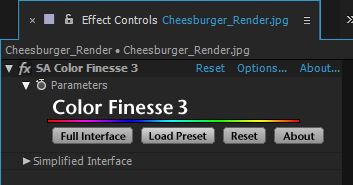 Use Color Finesse to extend your color grading capabilities

The interface to be fair is really quite basic in terms of design but it really does have everything you need at your fingertips! The top right shows you the resulting image after the applied grading although you can adjust that using the buttons next to it. The top LHS shows you a load of 'monitors', mostly waveforms, which shows you how your color is distributed in the image. And finally the lower half contains all of the color correction tools. 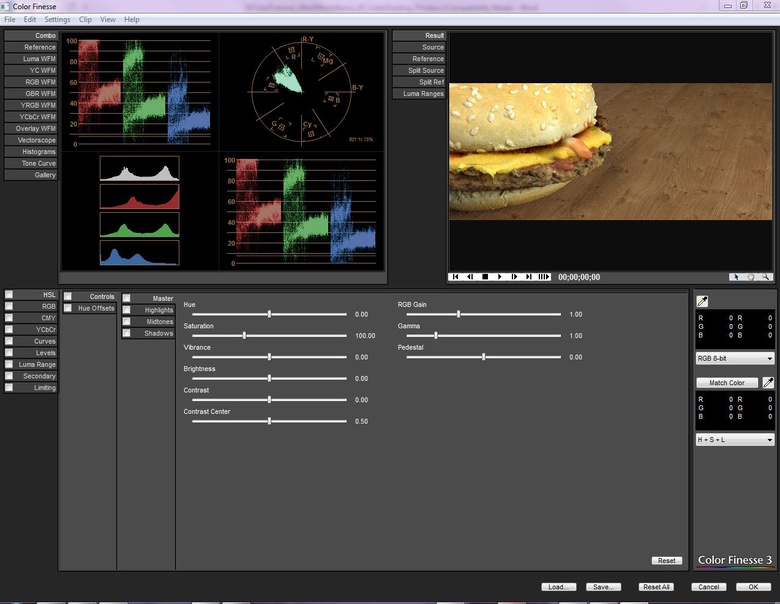 My most commonly used wave form is probably the 'RGB waveform'. View this by selecting it from the list on the top LHS. This monitor shows you the distribution of the red, green and blue channels. 0 represents black and 100 represents white. Each waveform moves from left to right and shows the color values from left to right in the image. This enables you to see if your image is properly balanced. 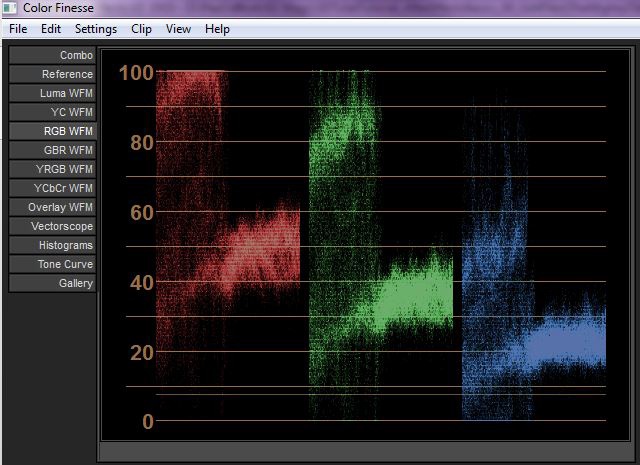 To get good color balance you will need to make sure that the white, blacks and gray tones in your image have an equal distribution of red, green and blue. In the waveform you will need to identify where the white and black parts of the image are and check whether those parts have an equal amount of red, blue and green. Reading the waveform will get easier the more you use it.

If your image is unbalanced then you can use the color correction tools to adjust it. I most often use the 'Curves' which can be accessed by ticking the box next to 'Curves' on the LHS. In the lower LHS there are 3 color pickers which let you select from the image what the white, black and grey portions of the image are. As you click them the curves will update. You can also manually adjust the curves to fine tune the RGB waveform.

Use the adjustment curves to balance the colors in your image

Use the HSL adjustments to balance the colors in your image 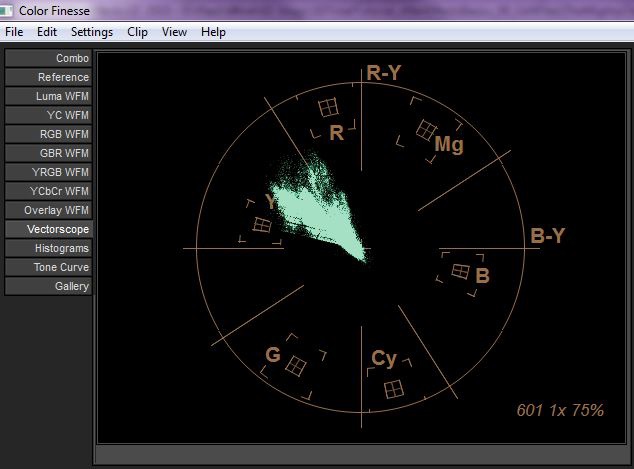 If you want to take color grading seriously then you can do your color grading in a separate bespoke piece of software such as Da Vinci Resolve. This provides much more extensive tools. The basic version which to be fair is incredibly extensive is free to use. 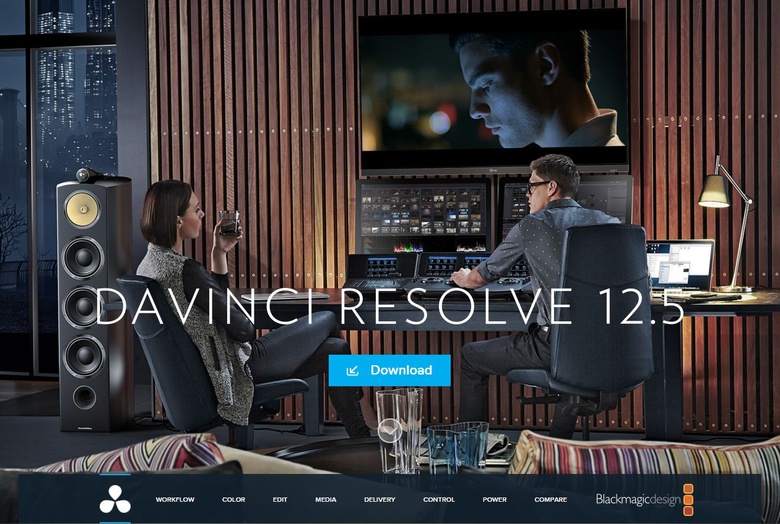