In part 3 of our "Know the Basics: After Effects" video series, we take a look at using effects to really make your video stand out...

In part 3 of our "Know the Basics: After Effects" video series, we take a look at using effects to really make your video stand out...

After Effects comes with a load of built in effects that you can apply to any of your assets, whether they be video or audio. These include things like colour correction tools, keying and blurring/sharpening. Knowing what effects are available to you and knowing how to use them will stand you in good stead for taking your projects to the next level.

Effects are post-production edits that are added to your footage in a layer based manner. This enables you to add effects but then also to adjust and even key frame the properties of each effect. There is a huge variety of options but you'll probably find yourself going to the same ones again and again. 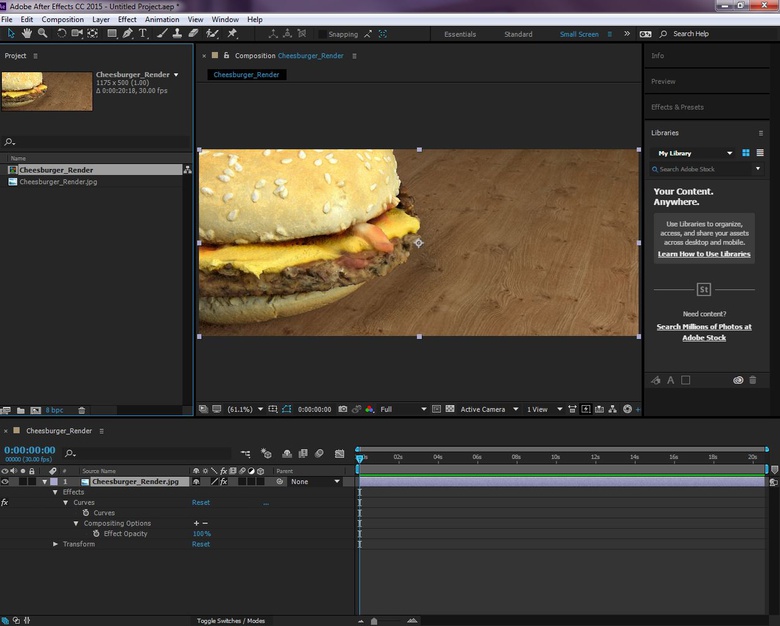 Use effects to adjust and extend your footage beyond what it looks like out the box.

Step 02: Where to find the effects

There are 2 places where you can access the effects. Firstly you can go to the top menu bar and to 'Effect'. This gives you a drop down of a whole host of different folders of effects. Simply click on an effect to add it to the currently selected layer in the timeline. The second way is using the 'Effects and Presets' window. If you can't see this just show it using the 'Window' menu on the top menu bar. This gives you exactly the same list as the first option would. 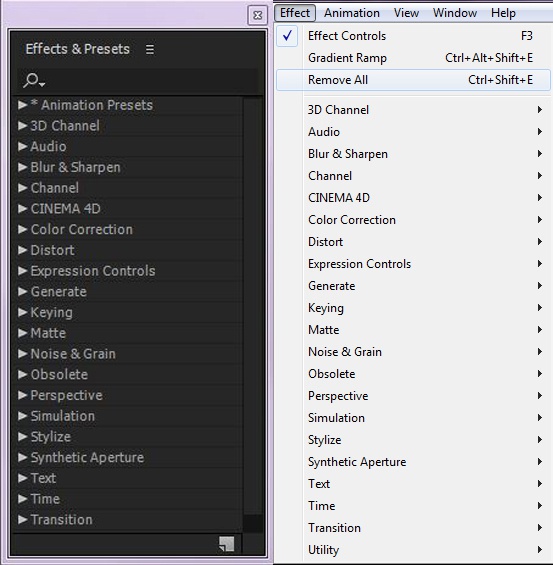 Use whichever of these two options you find most intuitive and natural.

With an effect added to your layer you need to know where to find its properties. There are 2 options. The first is to navigate to the timeline and to the layer that has your effect applied to. Then to the LHS of the layer colour there is an arrow. Click that. Then click the arrow next to 'Effects' and you'll finally see a list of the effects that you have applied to that layer. You can dial into those to adjust specific properties.

Adjusting the properties of the effects in the timeline gives you a restricted set of options.

The second option is by far the most utilised for me personally because it gives you access to a more extensive set of properties that the first option just doesn't give you. For this one you need to use the 'Effects Controls' window. It gives you the same list of effects and you can expand properties using the same arrow based system. 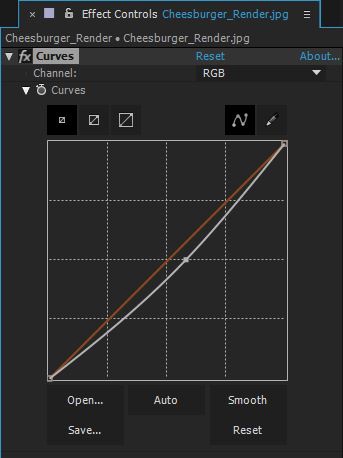 Access all of the effects' properties using the 'Effects Controls' window.

Probably the most common type of effect that I make use of are in the 'Color Correction' folder. This folder gives a huge range of 32 bit color correction effects such as curves, levels and hue/saturation. In step 9 of this tutorial and then in more detail in a later article we'll take a look at doing some more advanced colour corrections with a plugin effect called Synthetic Aperture.

Make adjustments to your footage by applying a whole host of built in color correction tools.

Probably the next most used effect that I use is the 'Gradient Ramp'. This lets you create either a linear ramp or radial ramp and is useful for things like vignettes or setting up any type of mask. For example, you might want your color correction effect to only be applied to your sky. Use the gradient ramp effect to create a mask that ensures the color correction is only applied to that part of the image.

Creative masks to fine tune adjustments that you want to make to your footage.

Another common type of effect is the 'Blur and Sharpen' folder of effects. These are most useful for creating shallow depth of field using a ZDepth element created inside of your rendering engine. There are plugins such as Frischluft Lenscare which will give you more accurate results but for some purposes the built in blurs are absolutely fine. 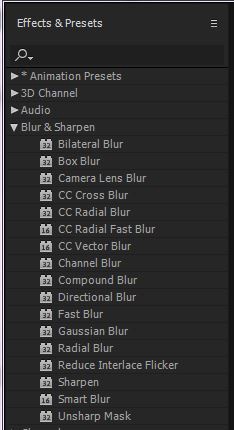 Blur the background out to create a shallow depth of field.

Often if you want to create a filmic look you may want to add a certain amount of 'fake' noise/grain to the image. Once again there are plugins and external presets which do this more accurately but we don't always have the luxury of those unfortunately. This folder of presets also has a 'Remove Grain' effect which can also come in useful.

Introduce film grain to give a more filmic look.

As previously mentioned there is an external plugin called 'Synthetic Aperture' which comes in the form of an effect. It gives you access to a much wider range of color correction tools and is a brilliant tool for doing color grading as it gives you all the necessary 'monitors' to interrogate your color data. We'll cover this more in a later article on color grading. 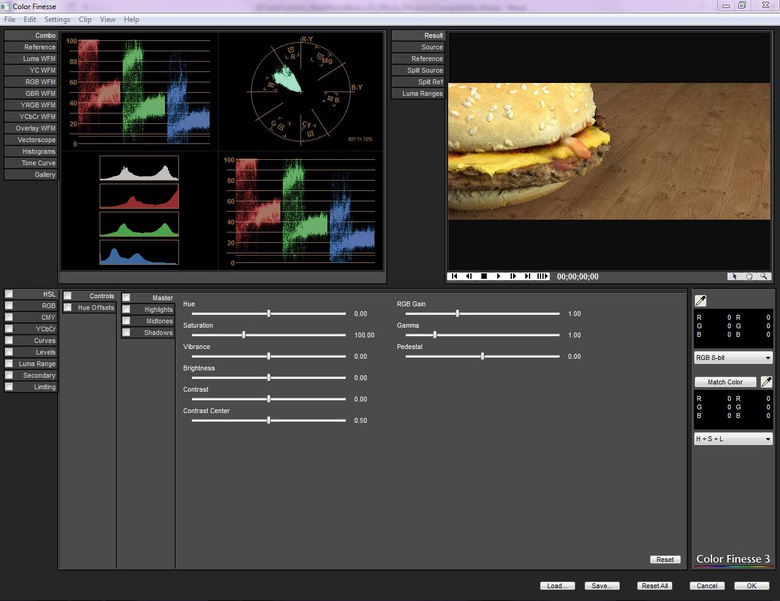 Make use of external color grading tools to give you even greater control of the look and feel of your footage.

The last thing to mention is that there are a tonne of external plugins such as Magic Bullet looks that once installed will appear in the list of effects. There are some incredible developers out there such as Red Giant who have made some excellent tools. It is well worth investing in some of these as they'll not only make your life easier but potentially enable you to take your work to the next level. 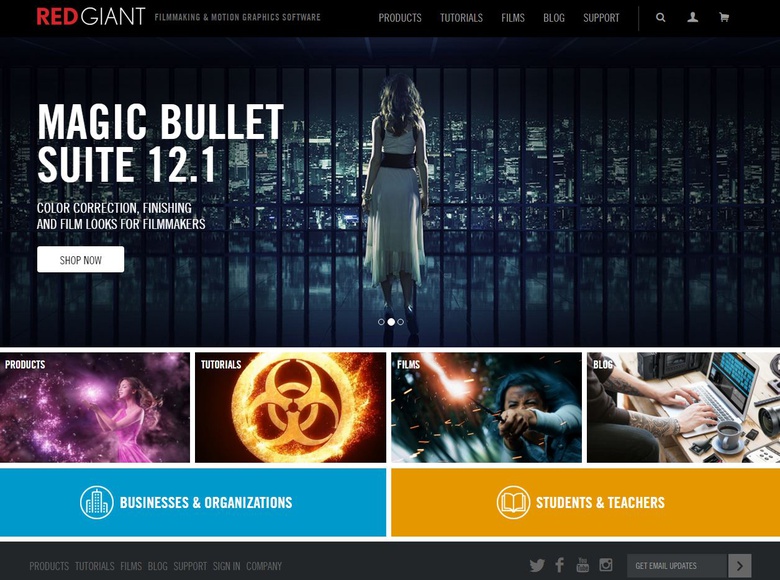 Not everything you'll need is straight out the box so do make use of external plugins to get the job done.

In the 'Effects and Presets' there is a search box at top. If you know the name of the effect you're looking for then this is a brilliant feature as it saves having to navigating through the sometimes laborious folder structure. 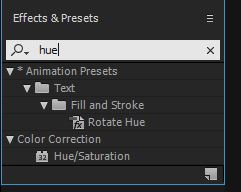 Find the effect you want quickly and efficiently.