Today we'll look at exporting footage from After Effects into a single video format ready for sending to a client or uploading to the internet...

Today we'll look at exporting footage from After Effects into a single video format ready for sending to a client or uploading to the internet...

With our video all put together and ready to go, we need to export all of those assets in our timeline into a single video file. We'll look at how we can do that as well as have a think about what file formats we might want to make use of. By the end of this tutorial you'll have a much better control over the export settings enabling you to get predictable results every time.

Step 1: What is exporting?

Exporting is the process of taking your timeline with all its layered assets and effects and turning it into a single video file that can either be played on a computer or uploaded onto the web. Getting the format and settings right is important, so that the file size is manageable and the end user can actually play it. 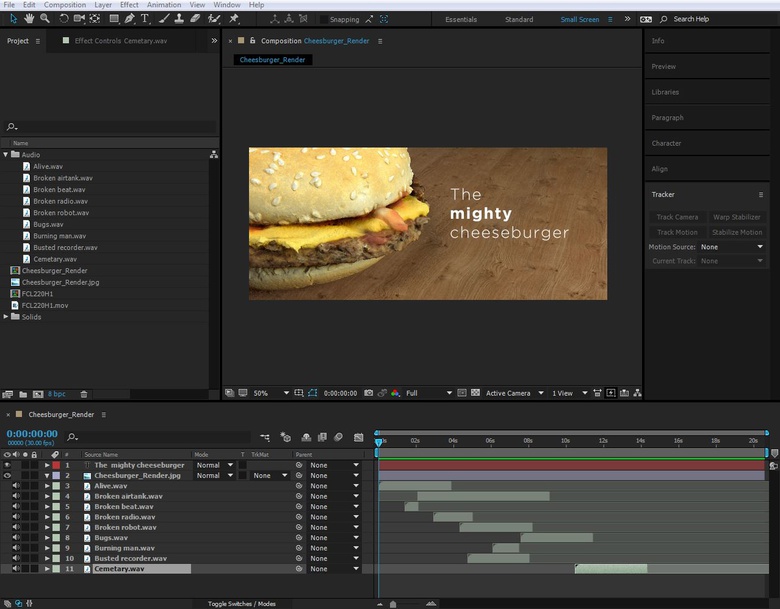 Exporting takes the timeline and turns it into a video files.

Step 2: Rendering inside of After Effects

You can render either directly in After Effects or using an external program. We'll look at the first option to begin with. Using the top menu bar go to 'Composition' and 'Add to render queue'. This will bring up a new tab next to the timeline. If you click on the word 'Lossless' which is default then it'll let you adjust the video and audio settings. We'll delve deeper into this in the next step.

Render using a reduced set of properties right inside of After Effects.

After Effects gives you access in the drop down list to a selection of the major formats. I don't personally use this method of exporting but if you utilise one of the included formats then this will be a perfect export type for you. With it selected you also gain access to 'Format Options' where you can adjust the quality of output and thereby the file size. 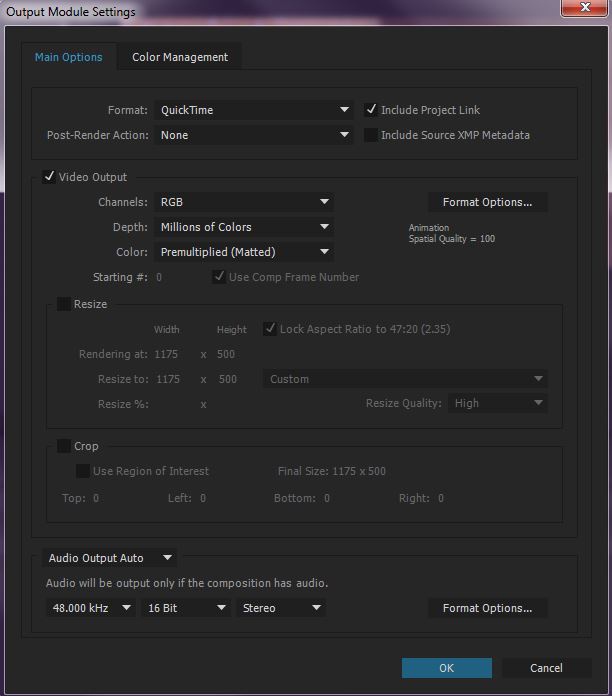 Set the format to one of the included options.

With everything set up simply click 'OK' and hit the 'Render' button which is located in the top right of the render panel. After Effects will then go through a process of exporting your file. Do note that After Effects is unusable during the rendering process. Once it has finished you can watch your video file back.

Render the timeline into a single video file.

The second and best way to export your footage is to use the standalone Adobe Media Encoder. Simply got to 'Composition' and 'Add to Adobe Media Queue'. This will launch the program. It gives you access to a much wider range of formats and settings. It even has a massive set of presets if you want to make sure you're doing things in an approved fashion. 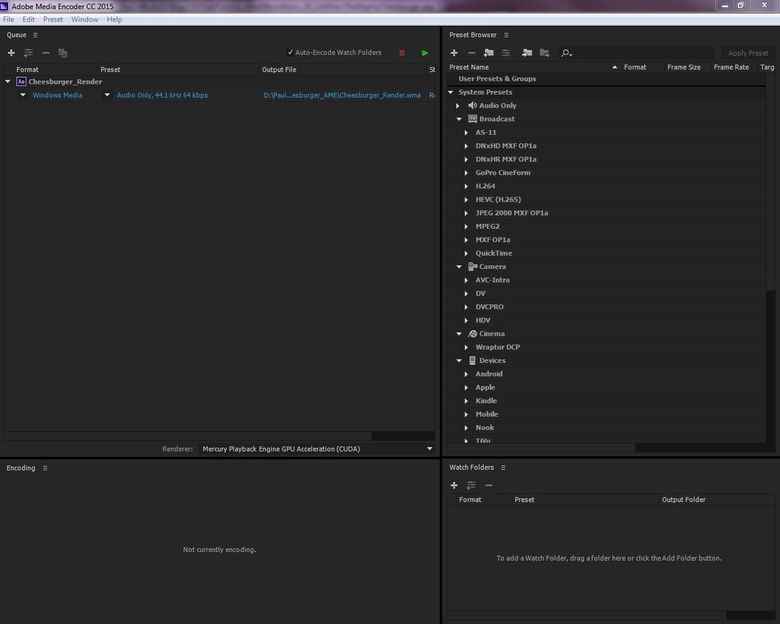 Use the Adobe Media Encoder to export your videos.

To set the format simply click on the blue text underneath the column 'Format' and you'll see another window pop up. Then in the top right there is a drop down menu giving you access to all the formats. I would recommend using h264 as it's great for most purposes. By the 'Output Name' property you can see both the filename and where it's saved. 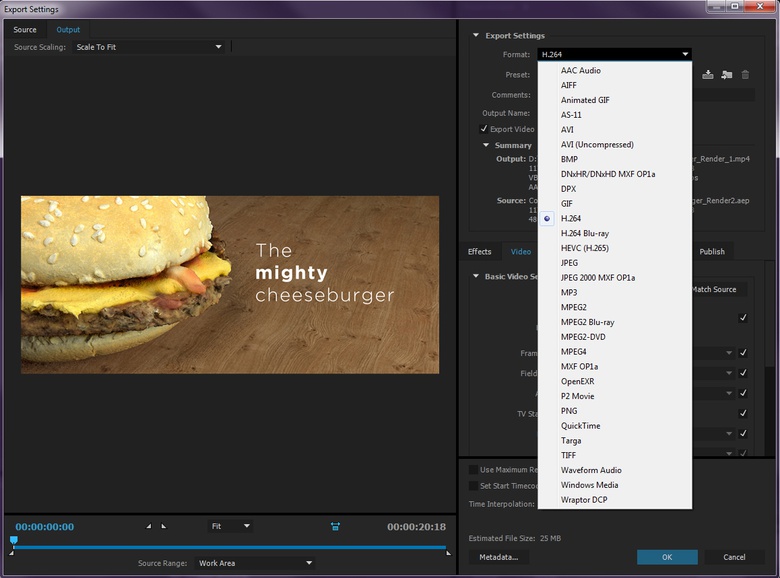 Setting the format gives you control over what your resulting file is going to be, both in terms of file extension and file size/quality.

Under the 'Video' tab there is a rollout called 'Bitrate Settings'. By default this is set to VBR, 1 pass which stands for Variable Bit Rate. This means that it will start at the 'Target Bitrate' and only move towards the 'Maximum' if it needs to. The Bitrate determines how much physical date there is in the file. The higher these settings are the larger the file size will be, but also the higher the quality. Anything 6 and above is fine as a general rule. 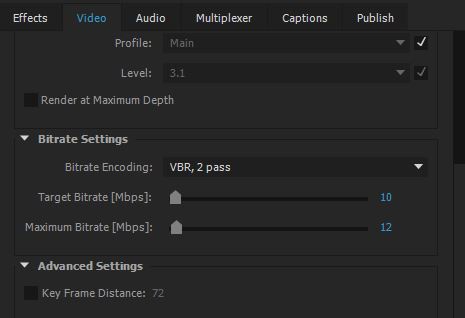 Set the bitrate so that the quality of the outputted video looks good.

The default audio in the 'Audio' tab is set to AAC and 48000Hz. This is high quality audio and in pretty much every case will be what you need. Easy as that! If you are feeling adventurous then you can adjust the bitrate settings for audio too but by default its set to the maximum possible value anyway. 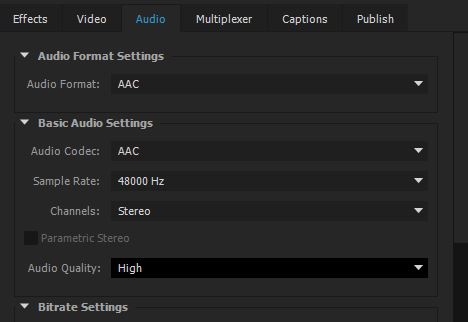 With all your properties set simply hit 'OK' and you'll return back to the main interface of the Media Encoder. On the top bar you'll notice a green play button. Use this to render out all of the files in your list. You can stack as many as you want up. The useful thing about the Media Encoder is that you can still use After Effects while the Encoder outputs the files.

Render the footage to create your video file.

Exporting in principal is pretty straight forward. If you want to have absolute mastery over the exporting of your videos then you will need to familiarise yourself with more properties than we've covered in this video. The Adobe help sections are really extensive though so head on over there if you want a bit of a challenge.

Familiarising yourself with more properties than we've covered here will give you finer control over the exporting of your videos.

To add multiple exports to the Media Encoder simply repeat step 5 as many times as you want. This is perfect if you want to leave your projects rendering overnight for example.