Illustrating Pennywise “IT” The Clown

Creatures are cool. Period. My favourite creature designs are the ones that take a basic thing that you are familiar with (human figure) and push and pull it around. Designing a scary entity with real character, using reference and your own mental resource library is not an easy task, especially when you are hired to do so. In this tutorial I’ll show you how to remain subtle, yet push the design further without any prior planning. For this, I chose everyone’s favorite scary clown: Pennywise (or a clown like IT) to demonstrate how you can use intuition and your understanding of forms and function to achieve that goal. 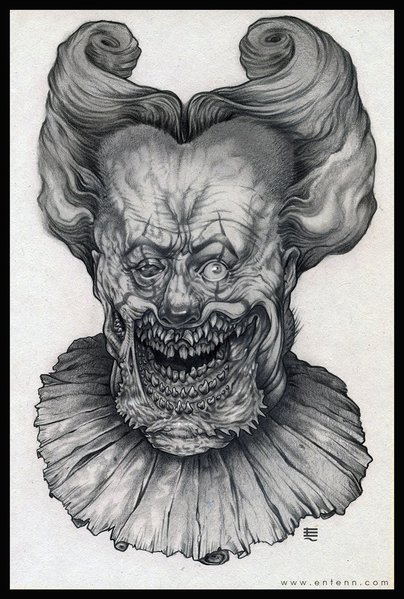 Make it scary, make it beautiful. Push it further and have fun. Know the story in your head and try to convey that, with character.

I have a vague idea what it is that I’d like to create but nothing too specific at this point. I start my work by drawing guiding parameters on the top and the bottom half of the page I’m going to work on. This helps you to coordinate a pleasing placement for your drawing, and will stop you from running out of paper. Force yourself to remain within these parameters. Don’t just start drawing and later realize that your figure is off centre and the composition doesn’t work. Try to stay precise and tidy. Also at this point, while you determine your basic shapes (I usually do this with harder pencils like HB) just try to have fun, recall some of the references you previously looked at. Be bold, surprise yourself. Don’t be afraid to erase. I personally love this part. 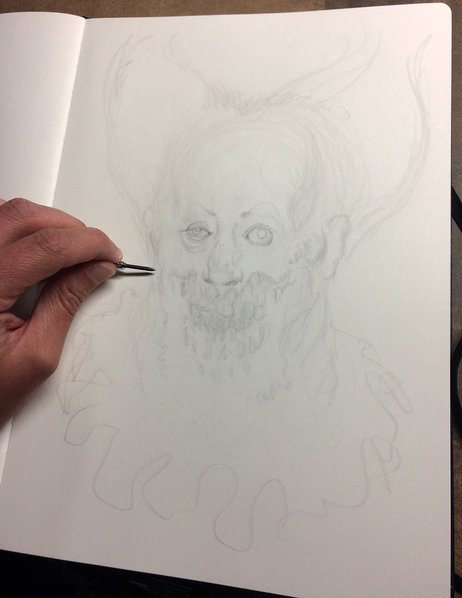 When you map your basic shapes out tilt the pencil, use bold thick lines with low or no pressure. Move your hand using your elbow and shoulder, not your wrist.

Moving in to begin to nail down those forms by using basic shapes to create the illusion of a three dimensional mass. I still do this with harder graphite, and at this point I still don’t commit to anything and remain very loose, just exploring ideas. I know you want to start on the detail work, and it’s exciting, but resist and stay with the mapping so you have the groundwork done that we can later walk on. 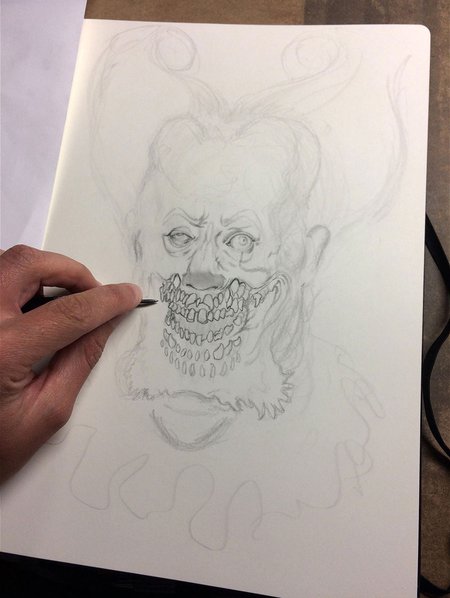 We create a solid groundwork at this point, so we have a more certain footing and can be tidier when we open the floodgate of sweet designing action.

Ah those beautiful eyes! I had this idea that as the character’s face turns inside out to reveal the monster under the human flesh; one of his eyes are already disappearing within the skull while the closest to us remains fixated on the prey. These little things create mood, story, and character. I tend to have a background story, reason, and consequence for the characters I create. You are not only designing, you are also selling an idea. 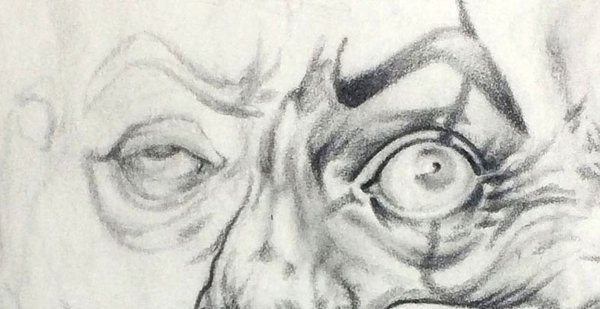 Eyes that no Beverly can look away from! Without really committing anything still we create a mood, and create a character gesture by communicating its intentions.

Now that we have that hungry, greedy eye we can tighten up the surrounding areas. This is where the real fun begins. We slowly observe the forms emerge. At this point I’m moving in with a softer lead like 2B while still using the HB occasionally to help me figure stuff out. Strive to remain intuitive, with no real commitment. Just have a lot of fun. 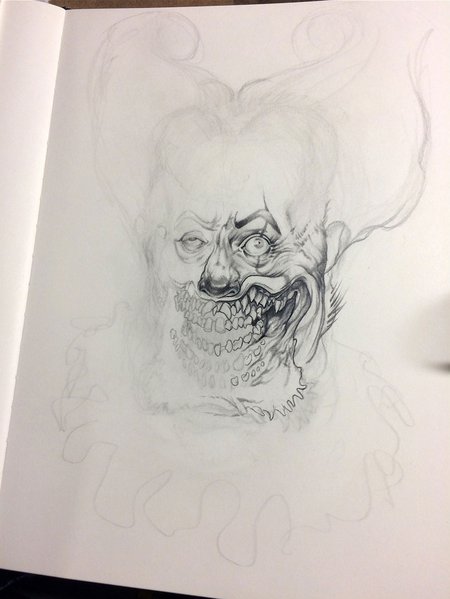 Intuition is our friend when finding forms in trying to create something engaging and real.

And then you start to work for the pencil

I’m on a roll now. Slowly but surely I start crystallizing where this is going. I want the hair to be big and pompadour like, almost funny. You can envisage how he could look like with his standard clown face. I’m pushing it, but I don’t know into what direction, just trying to surprise myself. You are now working for the pencil, and not the other way around. 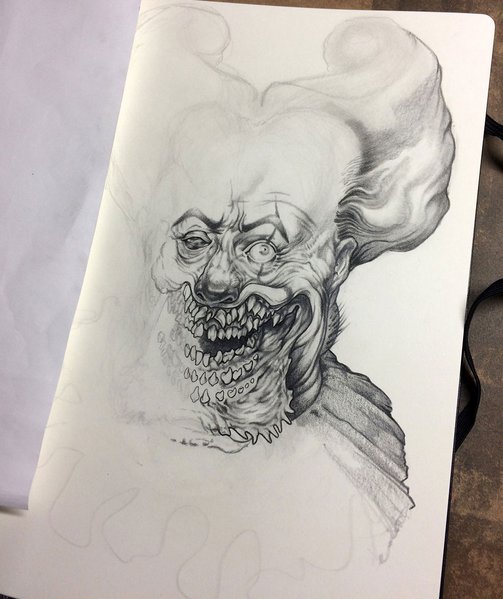 Character and tone are being further established while we supervise those forms emerge.

Take a step back

I basically completely erase the right side of the creature’s face as I’m not satisfied with where it’s going, and start the planning from ground zero. I want it to be torn more, and less symmetrical. Just following my intuition and pushing against my usual impulses. I try a lot of things including mandibles, fingers, more, bigger teeth. None of them work as they unbalance the face. 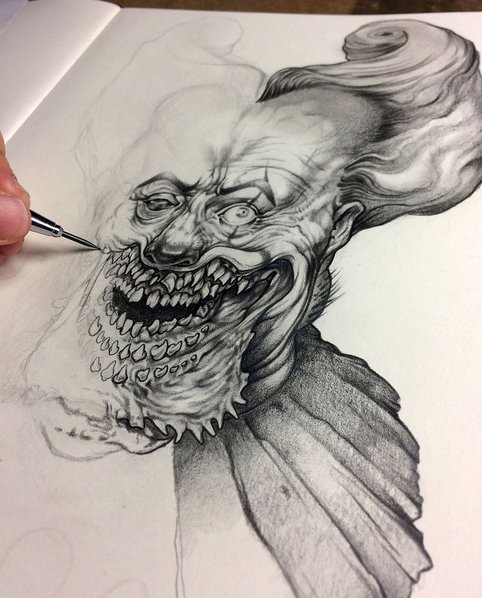 Don’t be afraid to go back and start throwing stuff out if you don’t like them. It’s about the search of that design.

Finalizing details and pushing on

At this point I go back to the previously established areas, get rid of stuff I’m not fond of and start blending, and punching the values. This will be done usually with some 2B-3B-graphite lead and occasional bursts of carbon. 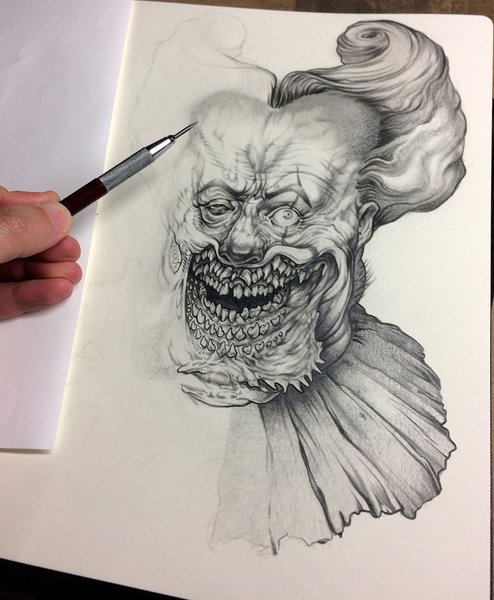 Cleaning up the already established areas, and punching those values. It’s a back and forth game now.

I decided that more teeth would protrude through his revolting flesh. Working more details in, and keeping on blending to create a sense of consistency. I also push the values further to try and control the eye of the viewer. 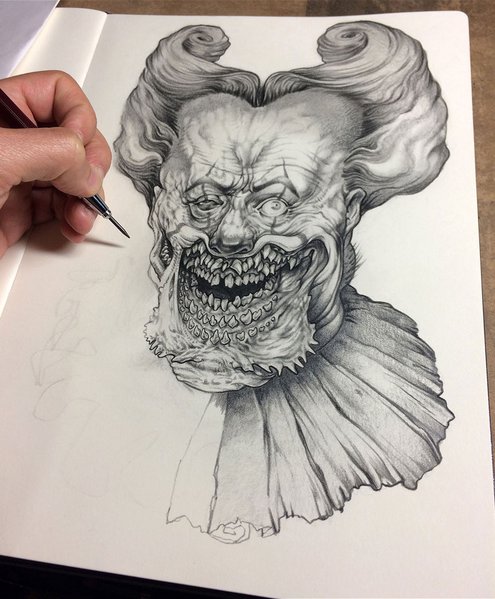 While tightening those details I try not to lose the sense of dynamic in order of conveying movement.

It’s pretty much done now, and this is when I move back do some tying of loose ends. I’m using softer graphite such as 3B, 4B, or softer. When I’m done, I move back in with some carbon to push those values even further. After I spray the piece with some fixative, sometimes (depending on what product is being used) the values can get a bit knocked down. When that happens I move back in with some additional value check and tidying. Then spray it again and he’s done. After this, we still have the opportunity to take the design further with a digital tool like Photoshop. Perhaps that is going to be another tutorial. 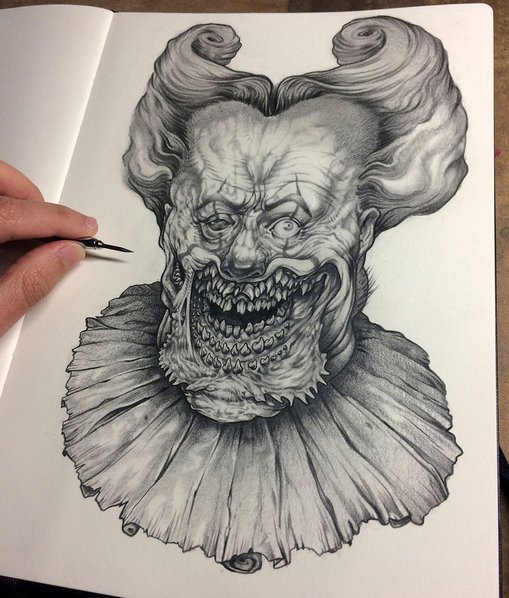 Final touches, finishing off a smile only a mother could love.

Let that be the research or execution phase, it’s essential that you enjoy the process and are not rushing. Take your time with all aspects of creation. Speed is good, but not at all costs. Hasty work is rarely satisfactory.

Imagine this character, know the how, the where, the who. Have these all figured out, because when you have your soul in it, that will reflect from the work. Cool is good, but it’s a result, not the goal.