In chapter two of three, Tek Tan produces the remaining assets for his cyberpunk girl scene, to be presented alongside the main character with the final goal of putting them together into an illustration.

Now that the main character's 3D assets are built, it is time to produce the other side assets. They are meant to be placed around the main character and put her in a good light. I also want to have them tell stories and convey what kind of world the artwork is set in. The final goal for assembling these assets is to produce a cyberpunk key art illustration. The skills you required to fully discern this tutorial are: knowing how shaders work, rigging, rendering, and utilizing softwares such as Maya, ZBrush, and KeyShot. 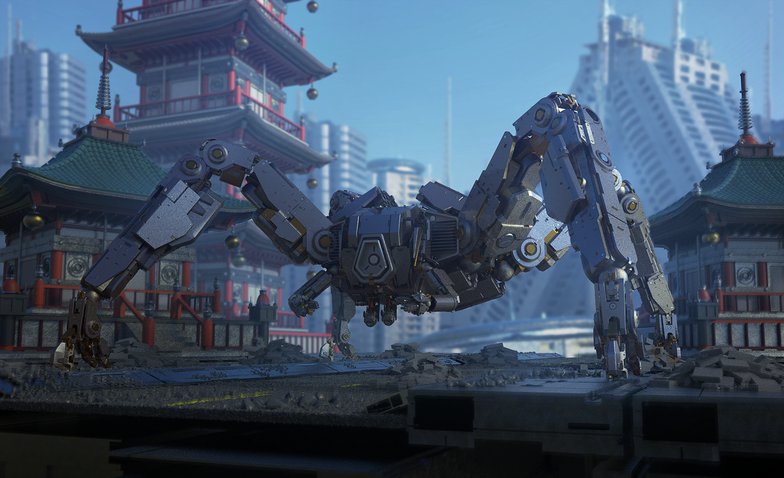 A quick test render with a bit of Photoshop retouching.

The shaders on the top row are the ones I used most frequently, not only in this project but also in past and upcoming artworks. They can even be applied to non-science fiction genres such as fantasy or steampunk. Bottom-row shaders made specifically for this project.

The metal material was one I used the most, it was meant for strong foundations that holds machinery together, like the frame/chassis of a vehicle. Metal 2 is similar to the former but darker – for a bit of tone diversity. Rubber is meant for keeping joints together or softer parts like tires and wires. Chrome and copper were used sporadically, mostly on hydraulics and certain interest points.

Spray Paint 1 and 2 were meant for the platings only. Glows and lightings were for bulb lights. I will usually put blooms and lens-flares over them during paintover. Plastic materials were for cosmetic purposes. 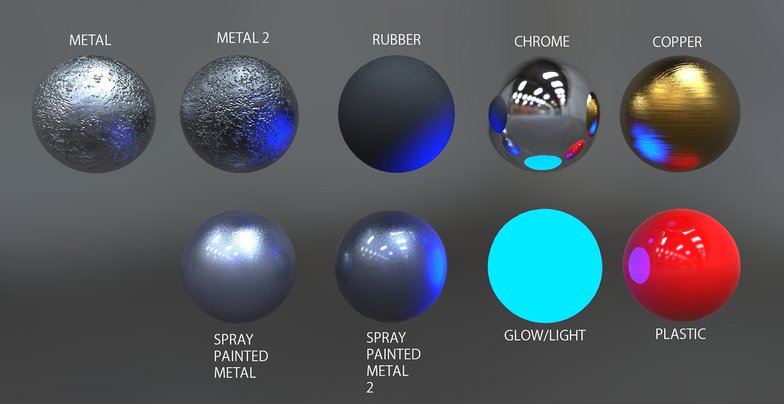 My materials have been modified and improved regularly over a long period of time.

This robot was inspired by Tachikomas from Ghost in the Shell, the spider-tank from Watch Dogs, and 80-X Boxguard from Deus Ex: Human Evolution. I deliberately built only 4 legs for this robot because if it had too many, that would mess up the composition of the final painting.

I saved this robot on the same file as the main character's Maya file so I could use its existing shaders. I first took the bullet cartridge from the main character, resized it, then bashed some other parts onto it. As I continued to kit-bash, I combined all said parts for the body, but kept them separated from the head and legs – because I will require them to move around later. 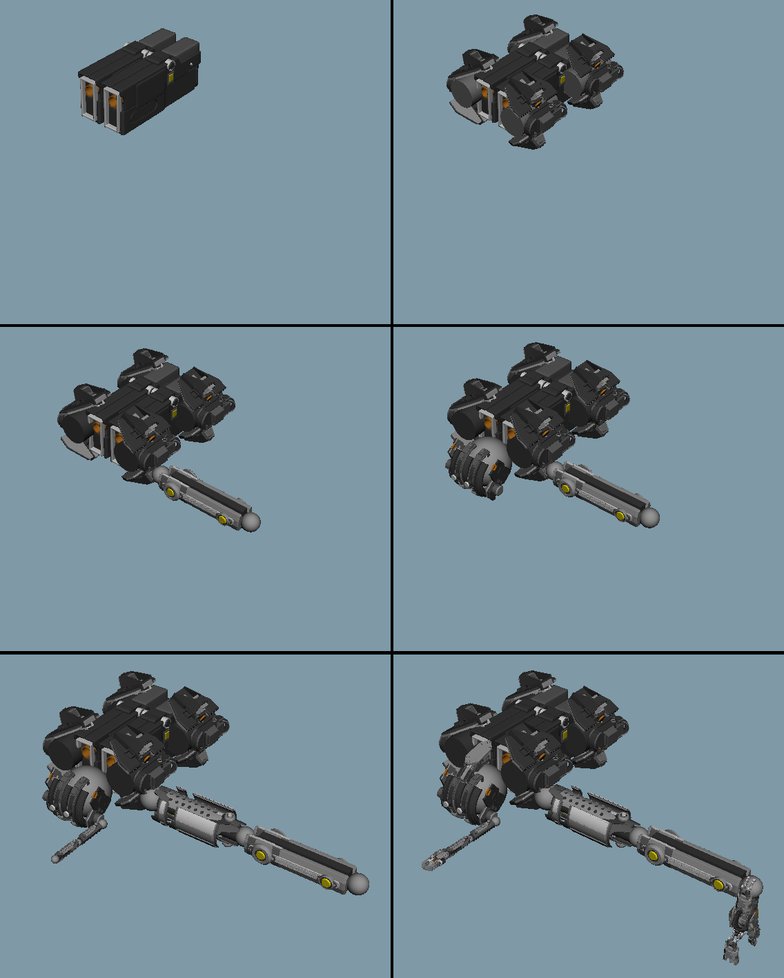 I only made a single leg and arm because they could be duplicated and mirrored later.

I assigned mostly metallic and rubber materials to the inside of the robot, because this section was supposedly mechanical. Next, I covered it with platings – kind of like the engine compartment of a car. The platings I used for this were kit-bash pieces made by myself for previous projects. I tried to cover the majority of the robot but kept some areas open so viewers could see the inside of the robot too. I didn’t put too many details on this robot because it wouldn’t be the main subject matter in my final illustration. It needed to have fewer details than the main character, but not so little that it became uninteresting.

After the essential parts were modeled, I rigged the robot – basically parenting each part to their respective skeletons. I then mirrored these skeletons for the legs and arms. The back legs were duplicated too. I then posed the robot but realized the legs were too big so I shrunk it.

Overall this robot took about 2.5 hours.

The main character will be fighting the law in the final illustration. The police are identical and were modeled very quickly. The pelvis area still looked very feminine; that was because it was initially a female body which I made more masculine (using the Move tool in ZBrush) for this project. I saved this character in the same Maya file as the main character as well, so I could use existing shaders and models. The chest, arm, and shin-guards were initially the main character's gun cartridge holster. The helmet was imported from a sci-fi character I made 2 years ago for a different project. 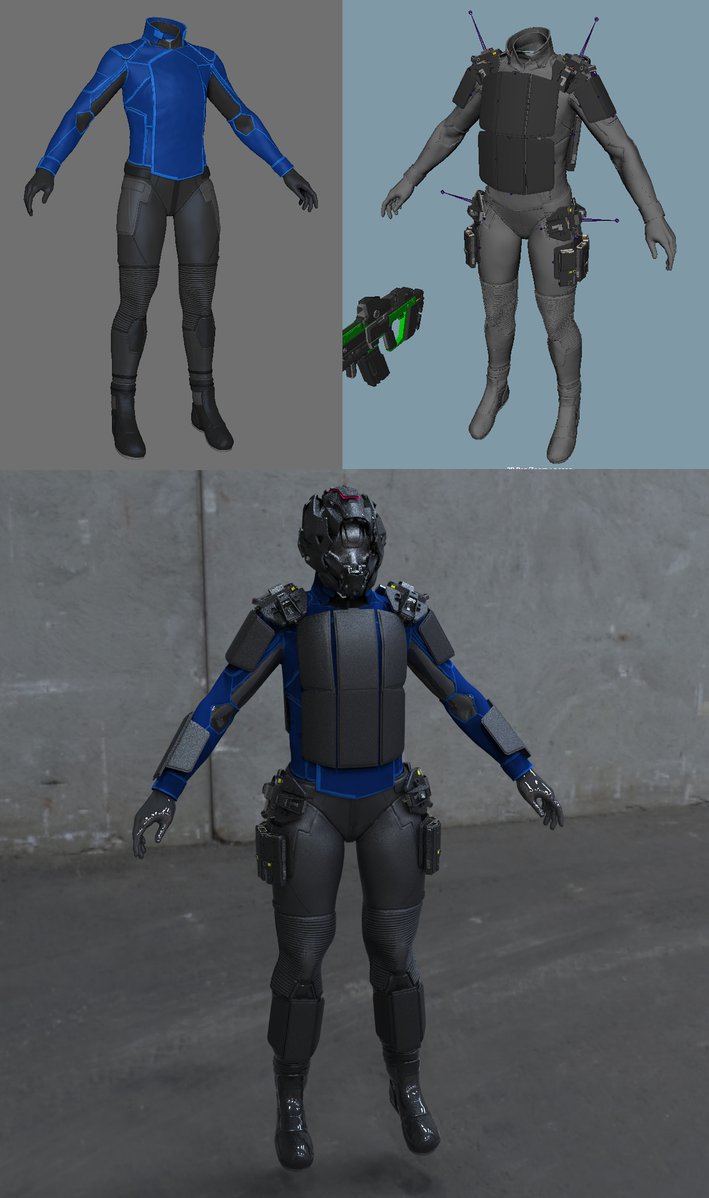 I will place some text on the chest and the back of the police officers in the painting stage.

When making buildings, I usually try to start off with other artists' models, mostly so I can save time and don’t need to model from scratch. I downloaded some free base building models from the internet and also bought some kit-bash building models from Vitaly Bulgarov's site. I then made some sills and platings, followed by duplicating them many times and then placed them all over the buildings. Because the setting of this illustration was in the near future, I wanted the buildings to look postmodern – with shiny and smooth surfaces and minimalistic silhouettes. I put metal poles/antennas on top of the buildings as well. I tried to keep the silhouette of the buildings as straight-line as possible because if they weren't made of simple bold shapes, they would hurt the composition of the final illustration.

I only worked on the front and side faces of my building, no need to waste time on the back side.

I have been using this floor model for more than a year now. On the center there is a road and the sides are made of metal platings. The floor usually isn’t as important as the other subject matter so I never put too much effort into it. Most of the time it will be covered by other objects and shadows anyway. My ground model can also be used as a wall.

I can change my camera angle to have it face the side edge of the floor to have it look like a new piece of machinery too – good for creating volume and nice compositions. 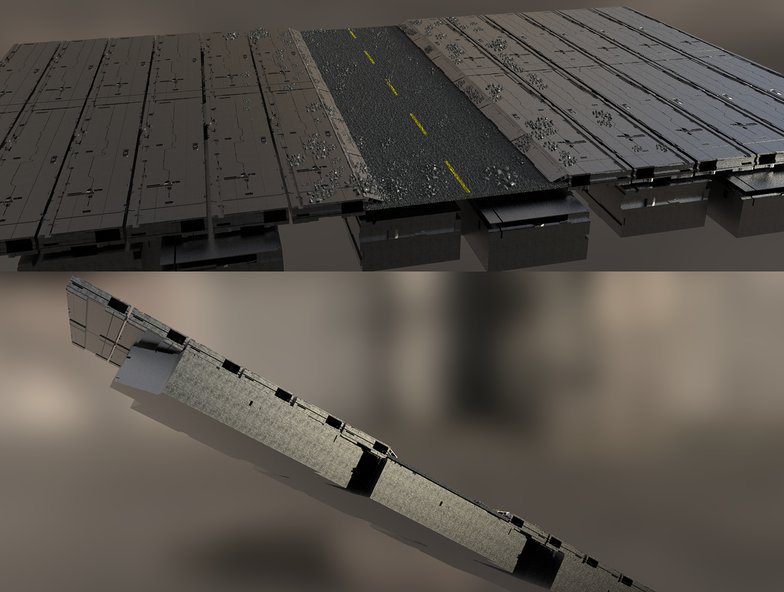 This asset is quite old, although it is not perfect I still use it today.

Similar to the previous asset, this garbage heap was also made more than a year ago. Its function is to make my illustrations more immersive and also adds extra volumes. I try to keep the general silhouette of these models simple and bold so they don't disrupt my composition in the final illustration. There were some floating bits on the garbage and I needed to remind myself to remove them later.

The garbage and bricks were made using ZBrush: I first made a base with the shape of a bulge, then I used the IMM capability to place their smaller mesh pieces onto the bulge. To have said pieces be of different materials – just keep them separated via SubTools and export them separately into your renderer. 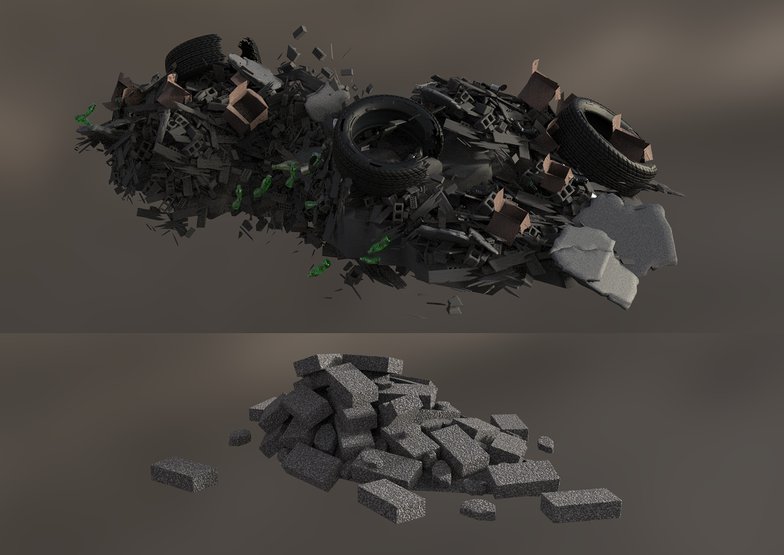 The bricks were low-poly, but in order to simulate a real brick's texture, I used an available displacement map from KeyShot.

Due to most projects I work on being science fiction, and that I love having lots of details in my work, I like placing loose hanging wires all over the place, be it in the foreground, background, floors, on characters – just everywhere! In this illustration, I will be putting these wires around the joint areas of my crab robot, some more around the main character, and if the composition allows it – some more in the foreground. As for the bullet belt, it will be kit-bashed around my police characters as well as for my crab robot's Gatling gun, but whether I will be making that Gatling gun or not will depend on the artwork's composition later.

When making the bullet belt, I modeled one bullet and portion of the belt, then parented it to one skeleton in Maya, then duplicated said skeleton multiple times until it became a string of bullets. Then I selected each of the single skeletons one by one and rotated them into a shape I liked.

It's faster to have these made in 3D than draw them one by one. Maybe you can photobash but you won't always find the right photos.

I made some buildings on step 5, but those were meant to be put far away in the background. These temples instead will be in close proximity to the main character. I wanted to apply temples to my illustration because I was inspired by a parade scene in Ghost in the Shell: Innocence. I think it is great to mix older cultures with futuristic ones.

When modeling these temples, I downloaded free temple models from the internet; said model was pretty bad with all meshes stuck together and only had one shader, but it gave me a base to work on. I then broke it apart, and modified it, adding details and assigning shaders and it became what it is now. This temple also goes into my library of assets that I can use on future projects. Overall creating this temple took about 3 hours. 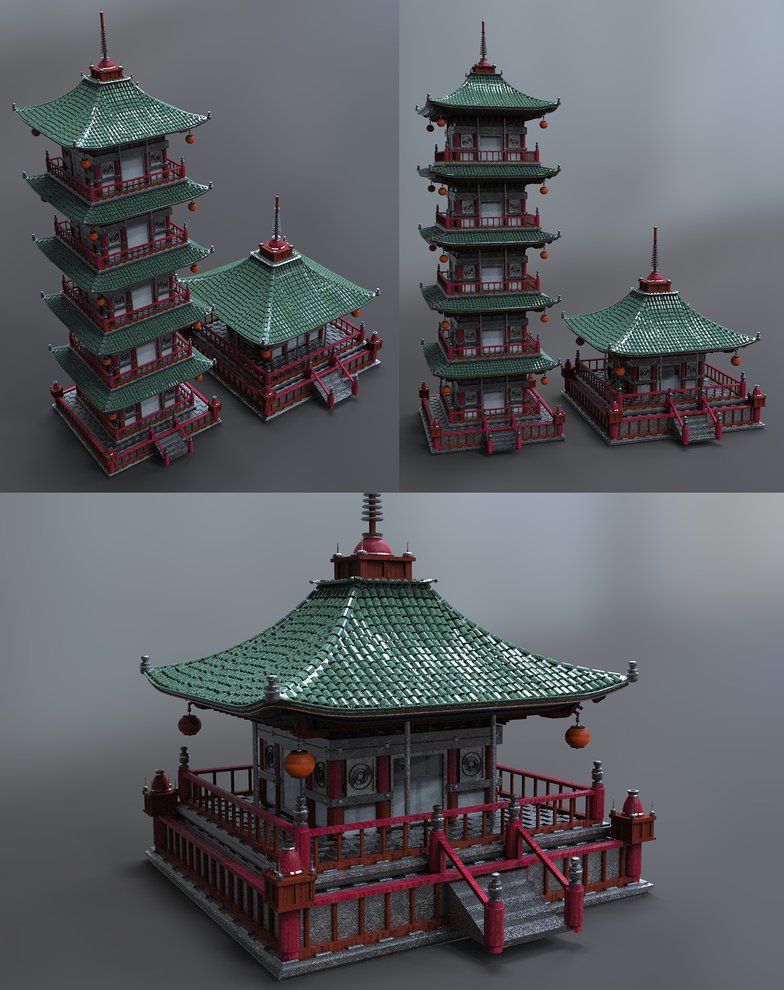 The roofing was made in ZBrush with the Curve, Stroke, and IMM tools.

When making neon lights, I recommend making your own or taking your own photos of them. I tried my best not to take any images from the internet. These neon signs are pre-made for other projects but I am going to use them here. They are meant to be placed extensively onto the faces of buildings to achieve a Cyberpunk feel.

Because the main character will be fighting with the police, I had some fires and shooting lines ready too. One other special effect I had is lens-flare, it will be put on top of one of the light source presented in my illustration.

Just a few examples of my large library of special effect assets.

Top Tips: Base your subject matter on its real life counterparts

In order to make something believable, you need to base it on its real life version – both in functionality and the whole make up. Try not to make things up that make no sense. Don't pull shapes here and there because you wanted to have more detail. Do research instead, and then create something out of that research.