Hello! I cannot avoid thinking about Laika from time to time. Poor dog! She had no idea she would be rocketed into space. The good thing about illustrating is we can create alternative universes. In this reality, Laika has landed somewhere in space and made some friends. 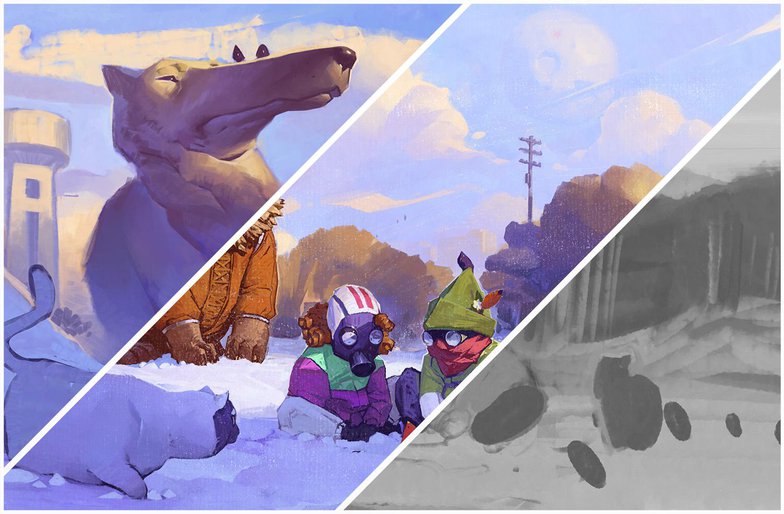 I had some spare time and decided to do a digital painting, so I started looking for images and get inspired. Among a bunch of images and paintings, I got hooked by one from Sergey Kolesov. This painting was about a giant cat/statue looking towards the sun.  So I sketched something with that idea in my mind. 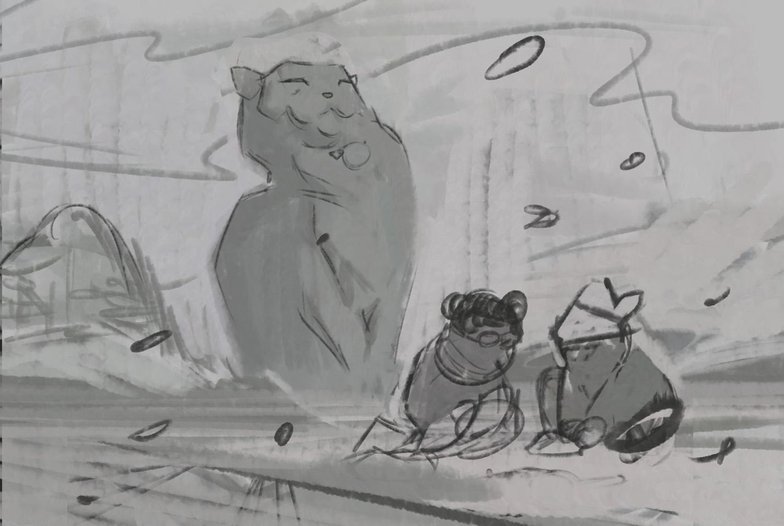 Once I got some very rough sketches, I started to think about colors, so I looked for bright sunset reference photos. I placed one of them on top of the painting to speed up the process. I had not located those colors in the chromatic circle while working on this image, but I did it here to show a very simple color formula: 3/4 of base color, 1/4 analog to the commentary color.

I am a dog person, that's why I decided to remove the cat. At this point I was not sure if it was a statue or a living creature, so I began to work on the story of the image. I sketched these two kids wearing masks playing and some less important shapes around them.

I used only one brush, which is from Shaddy Safadi’s brush pack. But I made a small modification adding color dynamics. I like to paint with many micro color variations, and this option allows me to have a lot of different colors and tones with a single brush stroke. 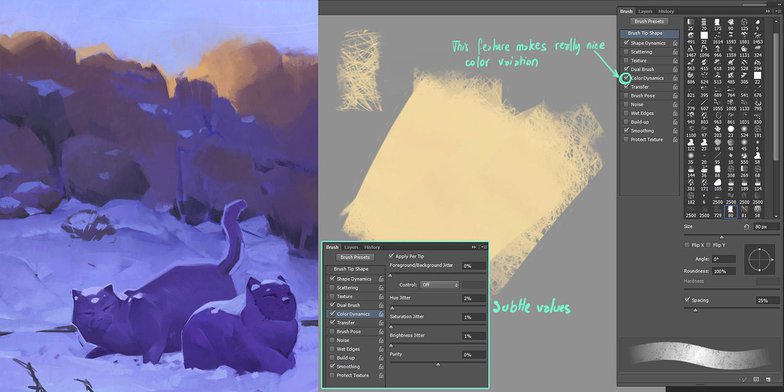 Have fun with the brush editor

At this point the direction of the painting was very clear. Even if it would continue changing, most of the features will remain. The lighting was quite flat at this point, but that was okay, the lighting mood becomes developed in later steps. I generally work on the lighting using curves or selective color filters masked with gradients or soft brush strokes. 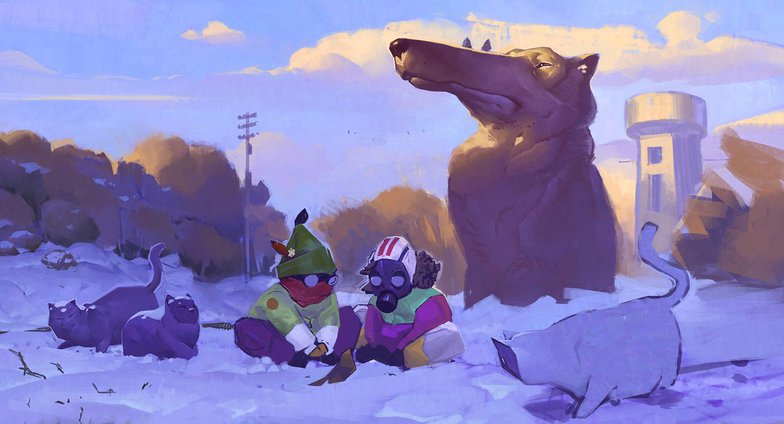 I added a bright area to emphasize the depths of the whole scene. I worked these areas as if they were 2D shapes like cardboard silhouettes. So Instead of visualizing the landscape as a 3D area, I found interesting shapes that popped up as a difference of depth, and interpreted them as 2D objects. 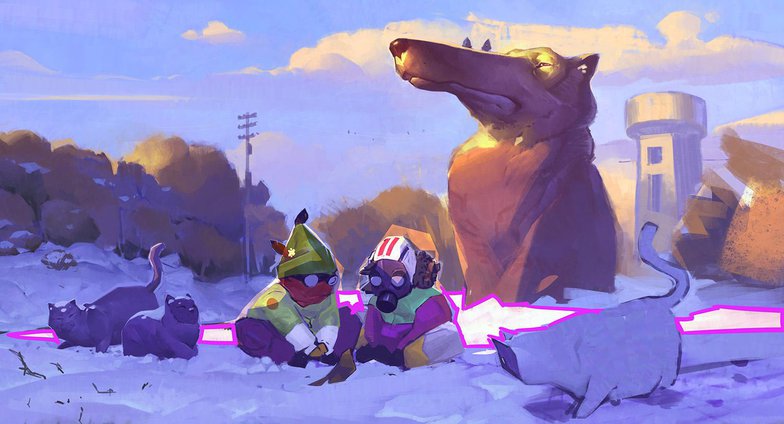 After having the lighting defined, a nice depth in the scene, and an interesting mood, I began to define the characters. To do this I chose a sharp and dark brush to make concise shapes. I put some kind of space coat on the dog and defined the direction of the fur. To achieve this I searched references of huskies, and figured out how to make an okay synthesis of the hair with a reasonable amount of brush strokes.

When adding detail to a painting, it is a good idea to set limits on the colors to use in each area. For example, if I paint something in the sky, the darker tone and color that I am going to use to define that new object cannot have a darker color than the color set previously. A good way to manage all these limits all over the painting is to zoom out (digital) or step back a few meters (traditional) and see what is going on. 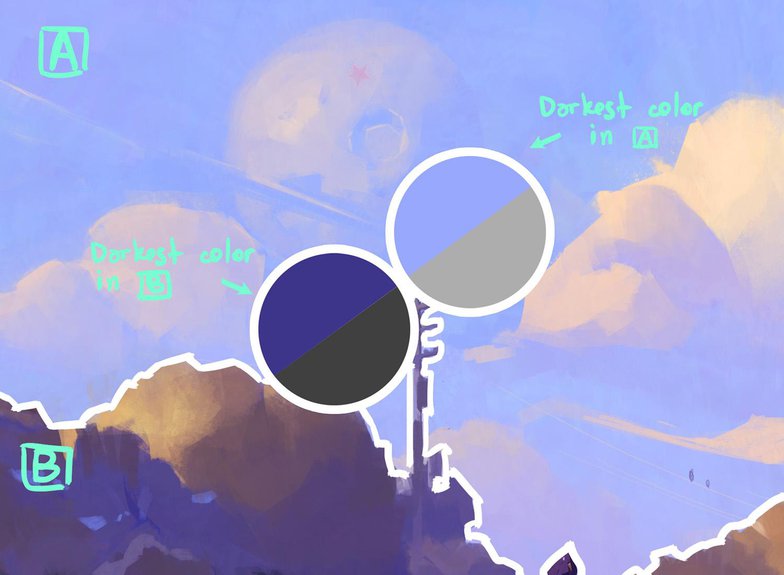 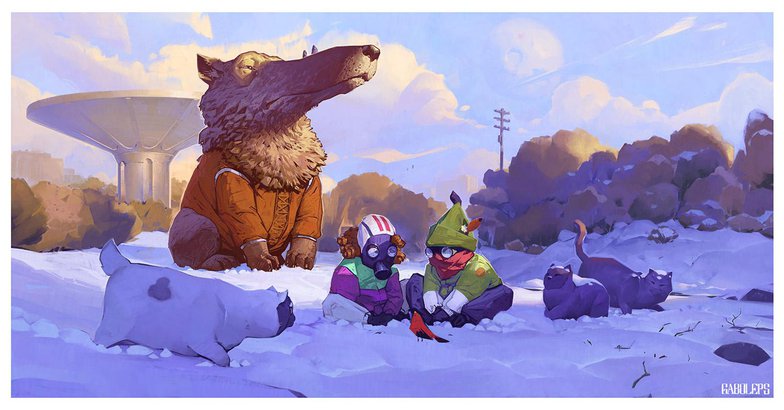 Once the painting was done and I was happy with the result, I applied a kind of post processing to the clean version. I created a copy of the painting, masked it with a canvas texture, and offset the position. Then added a version of the same texture but more subtle and erased with a texture brush. That was it!

I think observation is the most important thing in a painting, so I would suggest analyzing everything. And a good exercise is to see a color and try to nail the tone. 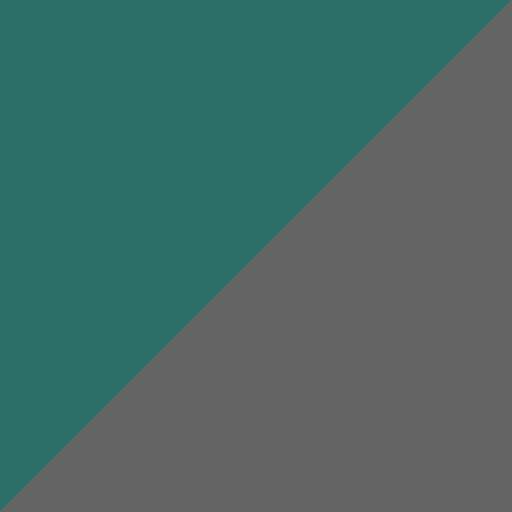