“Hello, this is the Zodiac speaking” making of

My name is Vinicius Paciello. I'm a 3D artist from São Paulo, Brazil. This article's goal is to show my workflow involving 3ds Max, V-Ray, and Photoshop. I'll also explain how I used it to create my last personal project, "Hello, this is the Zodiac speaking". Hope it's useful!

After deciding to invest my time on it, looking for references was hugely important and also pretty hard because of the 1960s aesthetics. In the end I found enough images to rebuild the whole scene but it was a large amount of research I had to do. 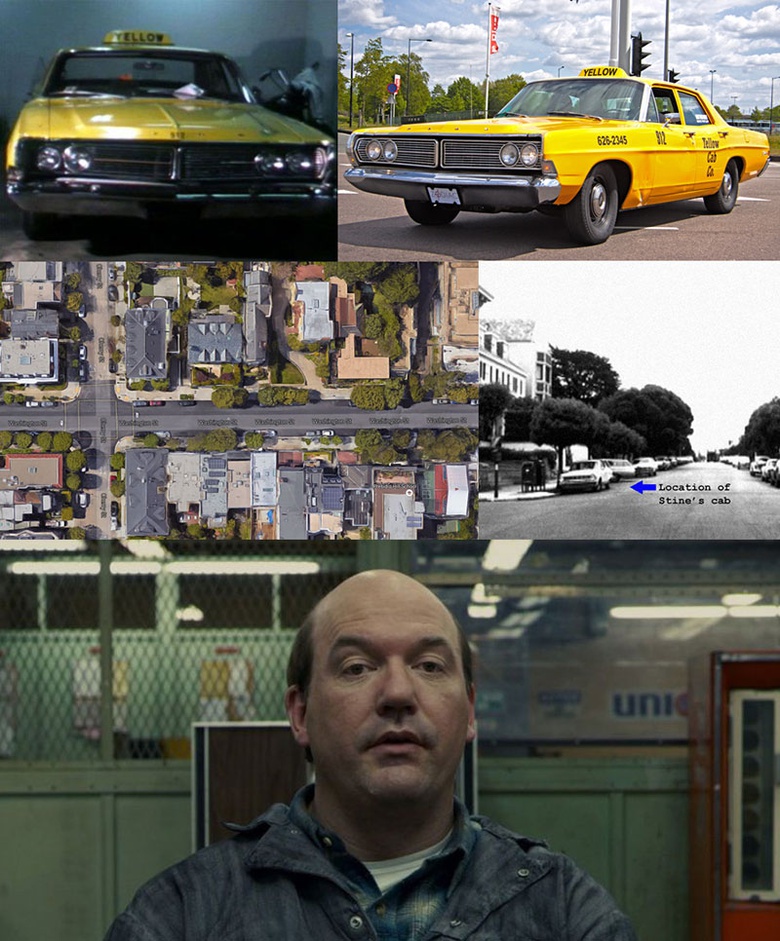 After blocking the overall scene and introducing the lighting and fog to the composition, it was time to replace boxes with detailed and shaded models. 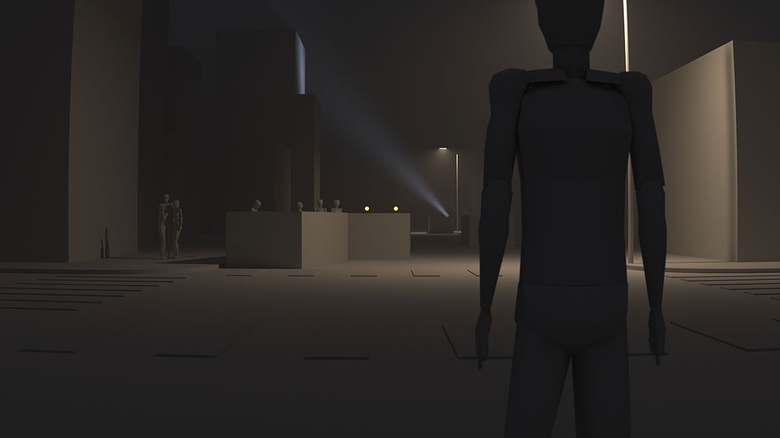 Blocking the overall shape and composition 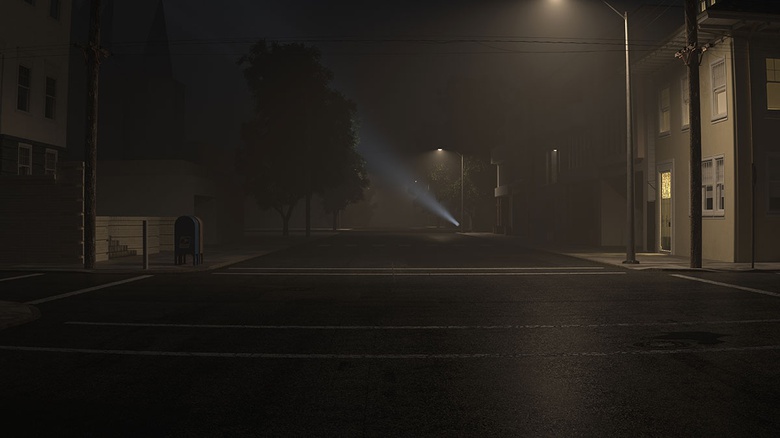 Detailing meshes and merging assets to build the final image

Modeling the entire scene wasn't hard. The main goal in a large project workflow is to keep it as light as possible, so I used instancing and every static object with a large poly count was converted to proxy to keep the file small.

One good example is the trees management. I created them using GrowFX for 3ds Max. The small ones are just one single mesh, and the huge ones we have in the background are actually instanced branches I created (2 different ones), scattered manually in one large trunk. This is a very good way of filling the scene with foliage, and in case you need an animated tree, you just have to animate the branches before exporting to vrayproxy. 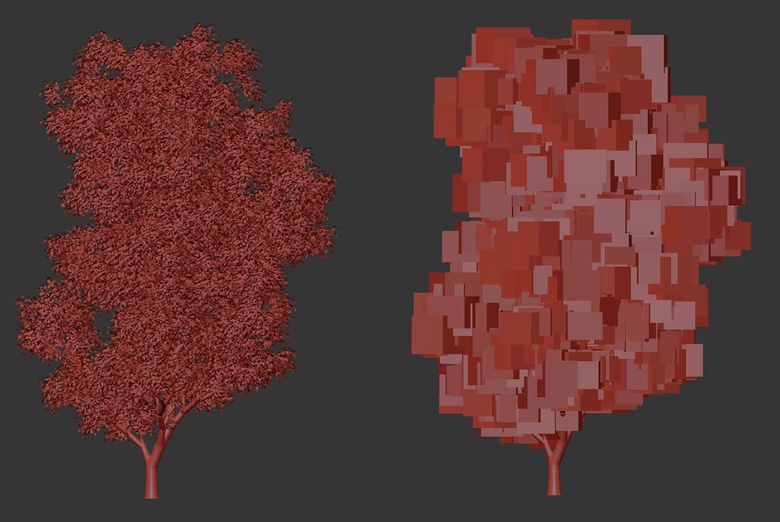 How I scattered branches along the trunk

Spent about one month and a week modeling the entire environment. Hardest part was after that: the car. Modeling the interior of a car is not easy (modeling the exterior of an old car is pretty cool though) and the lack of references made this process take more time than the whole environment.

Assets were modeled and shaded in a separate file so I can work with no autosave pauses and large file sizes, then I merge them into my scene file. Always try to organize a good layer structure so I can easily manage any asset in my scene 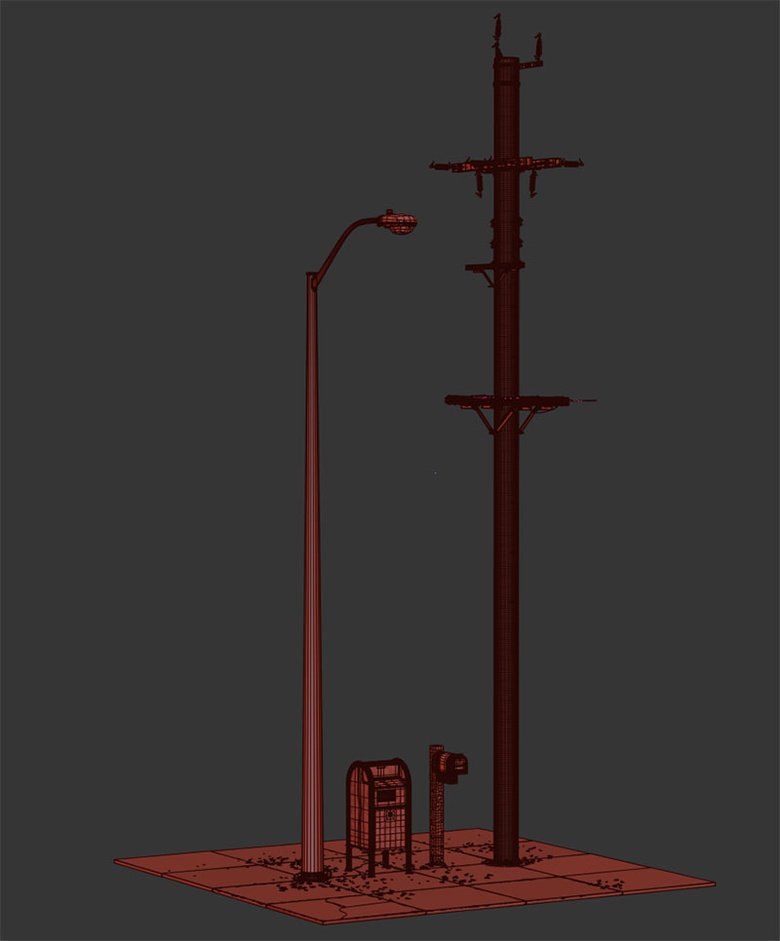 Sidewalk floor (which was instanced along the entire scene), poles and mailboxes 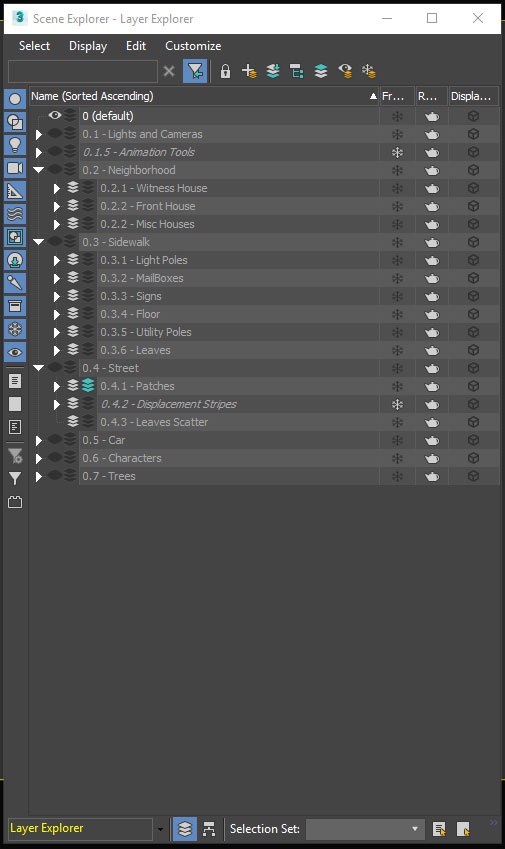 The shader below was built for the white brick wall you see next to the car. Shading was done pretty fast just by adding textures and blending materials into their dirt layers. This shader is basically the approach I used for all the shaders I have in the scene, and it does not take too long to render. For now, I believe this is the best way for creating realism, instead of mixing maps into a single VrayMtl.

It also does not take longer to render, as far as I have tested. Sometimes I plug the BlendMtl into a VrayBumpMtl to control the bump to the entire shader. In this particular shader I also used VrayMultiSub textures a lot, in multiply and overlay modes inside a composite node to add variation to the bricks, randomized by the MaterialByElements modificator which drives a random ID to the individual elements inside the mesh, in this case the bricks. Of course some other assets had manually painted textures, but more than 80% of the scene was shaded this way. 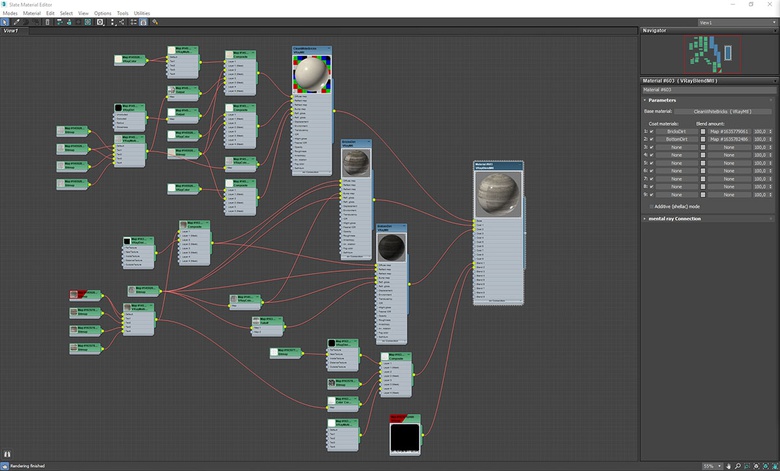 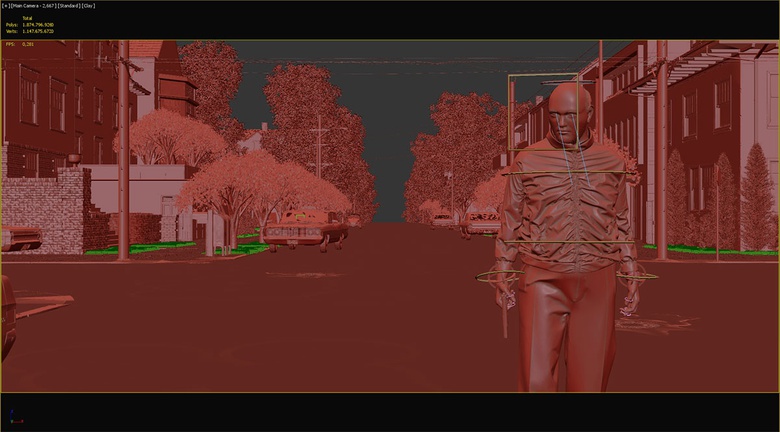 Lighting was the part that I almost did no work on. There are only real lights there. I just worked on their intensities. A weak, night skylight, the light poles, the rooms in the houses and the car lights and headlights. The VRayEnvironmentFog gave depth, control and contrast to the composition the way I wanted to. The lights are basically vrayLights in plane or disc modes, with some directional option customized most of the time.

Rendering was just a one-click process. I just chose the Brute Force + Light Cache GI setup. Almost went full brute force but rendering at 8K resolution is not easy at all when you have only an i7-3770 as a slave. I had to limit max AA subdivs by 16 and because of the heavy bump I had to remove lots of fireflies by hand in the asphalt. Still not happy with it and when I have the time, I might re-render this with the full quality I wanted. Post-production was just retouching the asphalt fireflies and color correcting. The main goal here was to desaturate the scene as much as possible to get the attention to the car, which is pretty saturated. 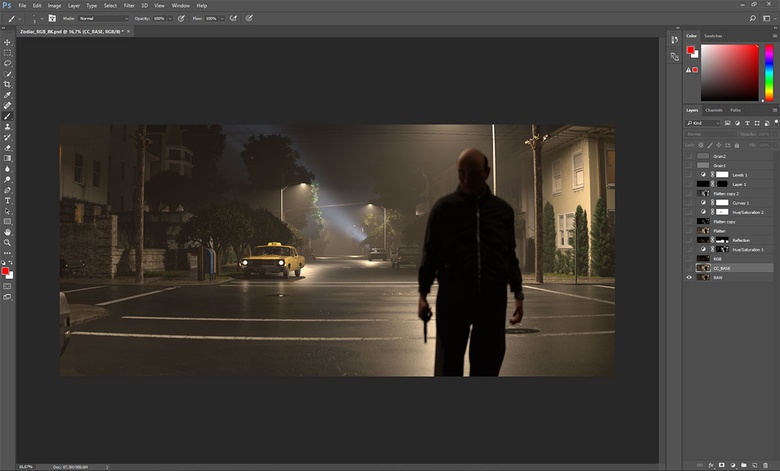 Raw render, before some color correction and retouching the asphalt

Check out an interview with Vinicius
Check out Vinicius Paciello's ArtStation
"Hello, this is the Zodiac speaking" in the gallery
Learn more with 3ds Max Projects