Creating such an effect isn't all that difficult; the material setup is pretty much straight forward, but a few additional elements can be introduced to give your scene a little edge in the realism stakes. As always, when trying to emulate something in real life, albeit something viewed using a piece of equipment, is to obtain as much source imagery as possible. Troll the net to find as many electron microscope images as you can; there are lots out there, and some damn fine examples of CG re-touching and / or emulation, which is what we are going to attempt. 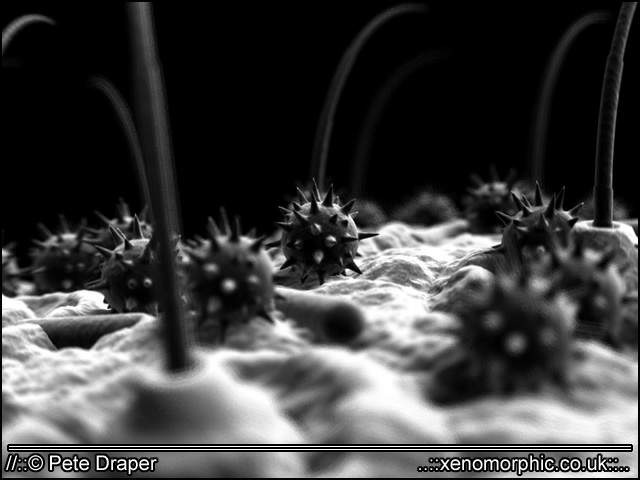 Multi-Pass depth of field effects can add extra realism to the effect, especially if coupled with scene motion blur to create a feathered effect.

By analysing these images, we can determine how we are going to attempt to design the base material and camera setup. Electron microscope images normally take the form of either a black and white (or green) image, or faux-coloured image, which is easy to do in post (simple colour blending layer in Photoshop for example), and relatively easy to produce in the Material Editor. We can also determine that slight shadows are also cast onto other objects as electron "light" behaves similarly to normal light.

The material should typically be an Oren-Nayar Blinn standard material with diffuse and ambient set to black. Also, to avoid any additional lighting, the environment ambient light to be set to 0. Create a Falloff map in the self-illumination slot and set it to Perpendicular/Parallel; you can amend the falloff's Mix Curve if so required to add more intensity to the self illumination. To fade the self-illumination down slightly when a shadow is cast on the object, add an additional Falloff map in the white slot of the first Falloff map. Change the falloff type to shadow/light and amend the Mix Curve if so required. Open the black colour swatch and change it to a mid-grey; just to bring down the side self illumination a touch when receiving shadows as self-illuminated materials do not show shadows! A copy of this map tree could also be copied into the diffuse slot to add extra illumination and to create additional effects. 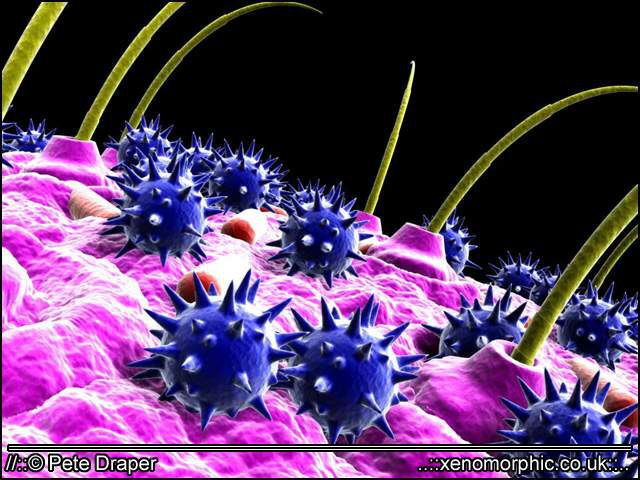 By simply amending the diffuse and self-illumination maps, the same scene can be coloured to simulate faux colouring by the 'electron microscope'

Next, we should add a slight texture to the material; a slight bump (or displacement) map should be added to add some irregularity to the material. A simple noise map will suffice, but a smoke procedural map would be better. Both of these should have a relatively small size and high iterations (for the smoke) to add fine detail.

Several combinations of this type of material should be created to assign to various elements in the scene; simply assigning one global material will not suffice to create a decent effect. Try amending the self-illumination of the material to give a slight translucent effect to the material. Don't add things like raytracing or refraction; by viewing the source images you will see that reflections (etc) do not occur, so would affect the overall effect of your image. 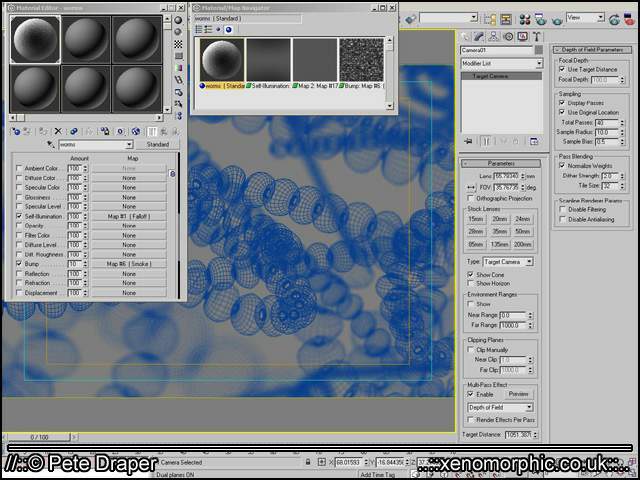 The material setup is straight forward, yet can be tweaked, refined and added upon to add extra detail such as displacement and diffuse maps

Don't be afraid to add copious amounts of Depth of Field! This effect can make or break your image and can breathe
life into a scene where the was previously none. Granted, multi-pass renders can take forever to render as each pass has to be individually rendered then composited together, but the end effect is much more worthwhile. Don't consider using a post effect as although Max's Depth of Field effect is easy to set up and use, the end result is quite poor and leaves artefacts in the image. Use the multi-pass render technique; set-up settings can be found in a camera's rollout. Use a low radius of about 10 and high amount of passes; something around 20-50 should give a decent result. The higher the passes, the better the effect, especially if the dither strength is upped slightly to break up any harsh lines that may occur when the images are composited together. 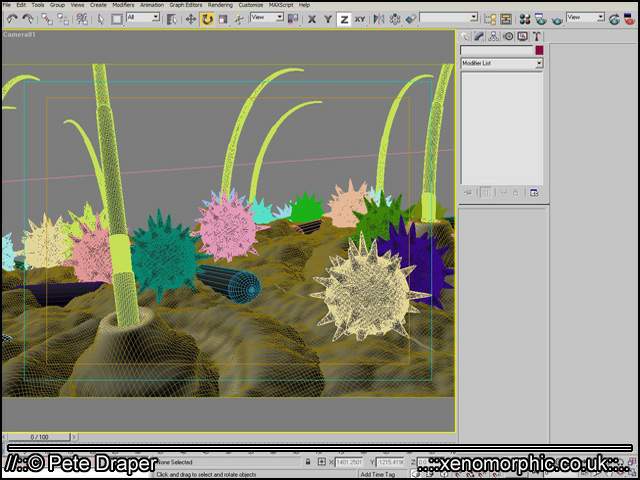 Don't be afraid to go mental with polygons! With this type of effect, polygons are king and extra refinement at render time can be brought out with the self-illuminated materials

If your scene and computer permits it, try to use as much geometry refinement as possible. The self-illumination will highlight these extra refined details and add more realism to the scene. One quick and easy method is to use meshsmooth and displacement modifiers, with the displacement using a procedural map as the displacement map, so we can get as close to the object as required without losing detail. Also, if Nurbs surfaces are used, extra tessellation depending on the size of the object in the frame can be used to add extra detail. Obviously, this will be at the cost of render times.

Finally, should you wish, you could create a false-coloured render by adding a falloff map in the diffuse and self-illumination slots to colorize the illuminated falloff effect. Additionally, you may want to add some slight feathering to the image. Simply clone the relevant objects and apply the self-illumination only to these cloned objects. If you add a noise controller to them and set the entire motion cycle to one frame, with motion blur added to them they will appear to be slightly furry, thanks to the smearing and diffusing of the motion blur. Again, this will add to the rendering times. 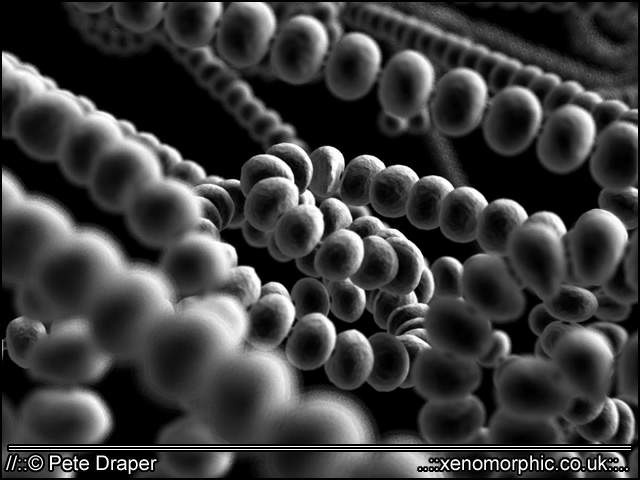 With this effect, even simple scenes like this can be made to look interesting. Have a look at any electron microscope gallery and try to emulate an image

Overall, a decent emulation of a scene can be obtained if you have enough source material, break down every element into it's core components and work out how to do each one, thus completing the entire scene this way to achieve the end result.