When modeling a humanoid face that you intend to animate, one very important concept to grasp is the concept of Edge Loops.

So what is an edge loop?
Wikipedia defines Edge Loops as "a 3-D modeling concept that allows relatively little geometry to convey relatively large amounts of spatial information in a given mesh object. This determines the "flow" of geometry over a surface, and usually has an influenceover the placement of surface detail and direction of the object's contours."

Basically you place loops of edges around specific areas of the face that deform. The eyes and mouth are the most obvious focal points for edge loops. When you open the mouth for talking, smiling, frowning, etc. having several consecutive loops will help with the deformation of the mouth.

Growing those loops to include the wrinkle from the nostril down to the corner of the mouths will make creating smiles, etc. much easier.

Edge loops are basically designed to follow the flow of the muscles of yourface so that the geometry will deform in the same way that the human face does naturally.

Whenever I'm going to model a face, I start with some sort of reference. Either a photo or a drawing - it doesn't matter (photos are MUCH more accuratethen most drawings unless the artist is very good. If you're still early in learning, I highly recommend you practice with photos).

I take the reference image and I plan out my edge loops ahead of time - long before I ever even start modeling anything.

When starting your edge loops, you should identify the primary areas of importance FIRST. 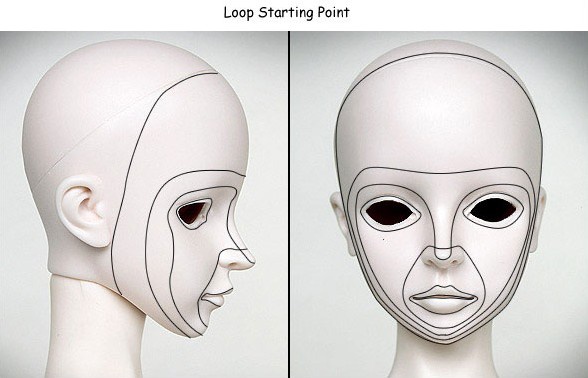 There are loops starting around the eyes and mouth, but in the end it will end with a large loop around the entire face. If you set this boundry for yourself, the other loops inside will conform to the final shape better.

Another area of GREAT importance, is making sure you get the loop going from the nostrils and around the mouth. This loop is very important in getting proper deformations with emotions. 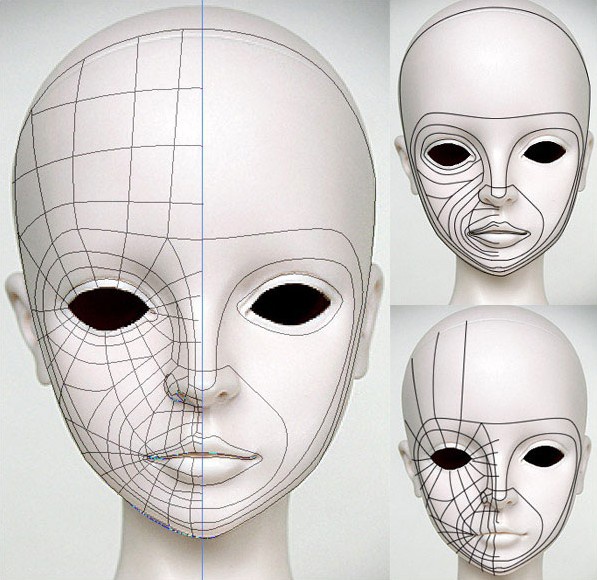 The next step is to simply grow out from that point. Continue to grow the loops around the mouth and eyes.

I use the pen tool in photoshop to draw in the lines I'm planning to make. (Make sure that the pen tool is set to Paths only, in the options bar)

The nice thing about using the pen tool is that it's so easy to make adjustments and changes as you go. I never settle with my first attempts at the loops. Even when I've gotten what looks like everything done, I stare at it and if something doesn't feel right, I go back and change it over and over till I'm happy.

The loops I plan out here will most likely not be the final product on the actual mesh. When I actually get to making the model, I tend to make numerous changes and add additional geometry all over the place. But the guides I set uphere, help lay a strong foundation and save me a lot of time in the end.

It's important to avoid too many n-gons (polys with more then 4 sides). 3-sided polys are unavoidable in some areas, but the fewer you have the better. Try to rework the layout of the edges until you've gotten rid of as many tris and ngons as possible.

Also try to avoid points where more then 4 edges come together. 5 Edges coming together on a single vert will happen in some areas, but if you find thatyou've got 6 or more edges connecting at a single point, then you need to do some clean-up.

Geometry like that is destined to give you deformation problems later on.

never make a guide for both the front and side of the face. When I have myreference in my 3d application as a background, the front reference has the loopguides drawn over it, but the side view is still clean. Even if you tried reallyhard to match your front and side guides when making them, it will still just bea guessing match. In the end, I find it's much better to just work in theviewport for the position the edges and verts should take from the side view.

1. Always use reference, and unless your drawing ability is really up there(or you're using a very well drawn reference) a photograph is better and more accurate to work off of.
2. Always layout the primary masses first. Eyes, Mouth, Nose-to-mouth loop,and Face loop. Even though you'll probably tweak and change them later on, laying them out from the start will help you get it right from the start.
3. Add additional loops out from the mouth and eye until they meet.
4. Avoid N-gons, tris, and verts with more then 4 or 5 edges meeting in a single point!

It takes time and practice to get the hang of where the best places to put your edges are. Don't expect perfection the first time you do it, and don't get discouraged. Every model you make is a learning process!