Perception Neuron from Noitom is a great piece of hardware that finally makes motion capture affordable for home users and small studios. They've recently joined forces with Reallusion to bring mocap to iClone, and I've been putting it to good use in my upcoming project, Star Wars: Imperials.

This guide will show you how to use it and get the best possible results for your videos. We'll be covering how to put the suit on, configuring the Axis Neuron software, and how to clean up the animations within iClone. There will be some useful tips that can further enhance your mocap performance as well. 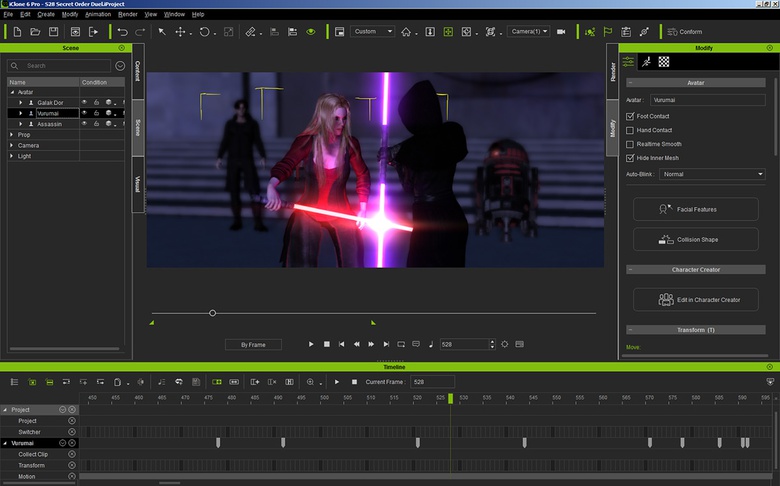 To follow this tutorial, you'll need to have Axis Neuron, iClone 6 and the Perception Neuron plugin for iClone installed. 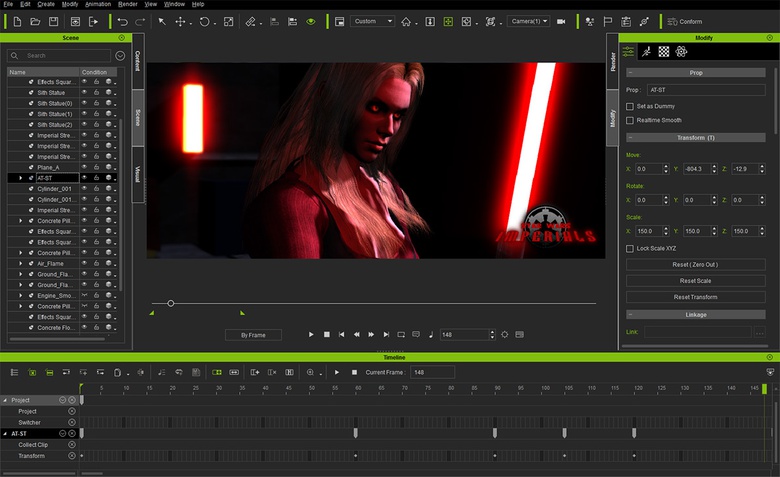 Step 1: Before you Begin

The first thing I'd like to discuss is putting on the suit and how to position the sensors correctly. A poorly placed sensor can do strange things to the way your characters behave. I recommend wearing comfortable clothing, such as jeans and T-shirt. Remove metallic items such as change, belts, phones, jewelry and so on, as they can interfere with the magnetic sensors in the suit and damage them.

Useful Tip: On the back of each sensor is a little diagram to indicate where it should be placed. 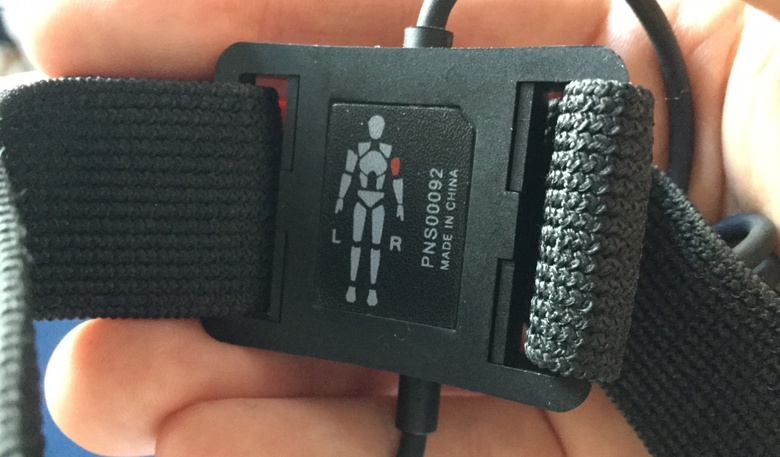 Step 2: Putting on the Suit

The harness goes on first. Arms through the shoulder straps, then fasten the belt around your waist. Place the head sensor on the back of your head, in the middle, just above where the spine meets the skull. Legs on next. Connect the wires to the waist sockets on the belt. Place the upper leg sensors at the top of the thighs, with the sensors pointing out sideways. The seams down the side of your trousers are a good marker for where to place them. 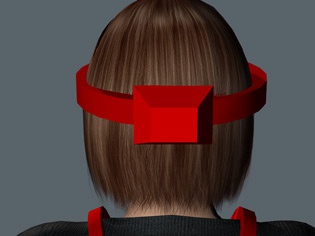 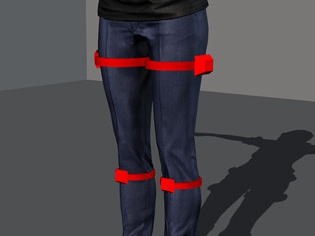 Useful tip: If you're putting the suit on yourself, the belt can get twisted behind you and can easily be put on the wrong way around. There is a wire on the belt that connects to the hub, if that's on your left, you should be fine. 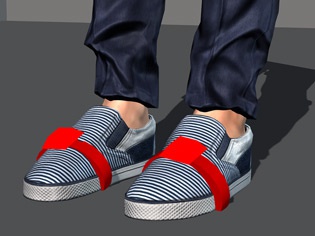 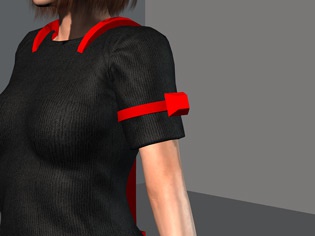 The lower leg sensors need to be placed just below the knee. Fortunately, human legs have a natural curve that provides the perfect place for the sensors. These need to be pointing forward. Finally, the feet. These need to be placed on the flat part of the top of the foot. Moving on to the upper arms, place the sensors above the bicep and as with the thighs, these need to point sideways. That just leaves the gloves, and then you're all set to begin motion capture. With the whole suit on, it should look something like this. 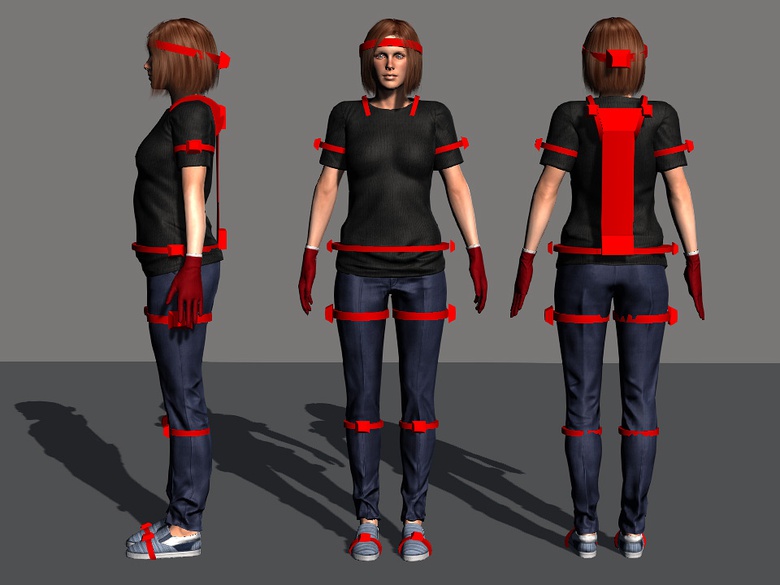 Now that you know how to put on the suit, the next step is configuring the Axis Neuron software that comes with Perception Neuron. Even though we'll be recording our Mocap session in iClone, you'll need to run Axis alongside it.

As soon as you launch Axis Neuron, it will ask you to connect the suit. Follow the on screen instructions and once complete you'll be greeted with the main Axis Neuron interface. There are a lot of settings but we're only going to focus on the essentials. Select the Parameters tab, then set Joint Stiffness to 1, Step Stiffness to 0.89 and Step Constraint to 0.61.

These settings control how closely the bones of the character stick together and I find these settings look best with characters in iClone. Feel free to experiment with different levels.

Useful tip: You'll need to know the height in centimeters of your MoCap actor.

You need to select a profile for your Mocap performer. These are based on the height of the person in the suit and help the neurons know how far apart they are from each other. The more accurate this information is, the better the results of your Mocap session.

Measure the height of your performer and select the profile that's the closest match, for example a woman that's 166cm tall would need the Female 165 profile while a 173cm tall man should use the Male 175 profile. 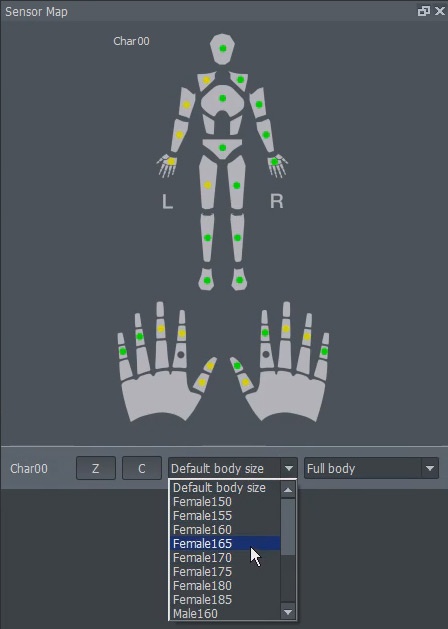 Useful tip: Don't use the default profile unless your actor is a good match for those settings.

You've got Axis configured, your actor is in the suit, you're almost ready to go. Launch iClone and place the character you wish to animate. Don't worry about placing other objects in the environment for now, the less iClone has to process, the smoother the performance will be captured.

You'll want to give yourself a nice long project time to work with too. I usually set mine to 4000, so there's little chance of my capture session being cut short mid-way through the scene. Go to the Plugins menu, choose Perception Neuron and the motion capture window will appear. 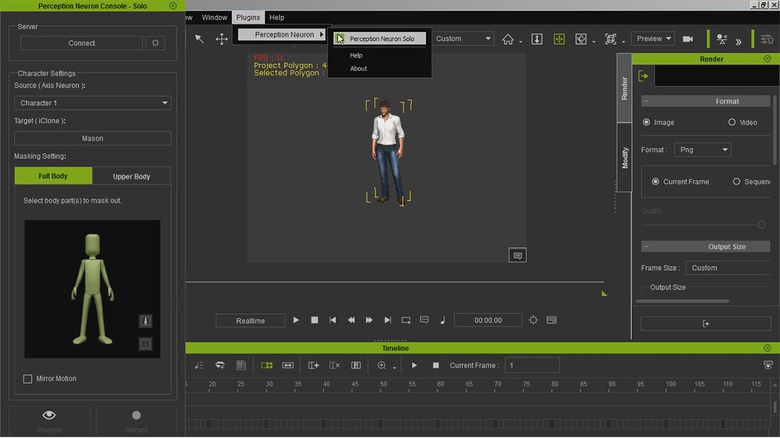 Click Connect and iClone will automatically link up to Axis Neuron. Click the preview button and you'll see your character move as your actor moves, and you can use the record button to record your actor's movements.

Before you jump in and start capturing animation, read through the next section as it offers useful information on how to get the best results for your scene.

Practice your scene before you capture it. Even if you're doing something fairly straight forward, it's good to run through it a couple of times first so it comes naturally to the actor performing the scene.

With fast movements, such as fight scenes or dancing, have your actors perform slower than normal. Sometimes the suit can miss frames and the slower the movement was performed, the less of a jump it is between those missed frames. You can speed up the animation in iClone afterwards.

If you're going to capture a scene in which characters are holding an object, make sure your actors have something to physically hold as it will make their motions feel more real if they have a prop to interact with. Make sure your props are not metallic, so they don't interfere with the magnets in the suit. 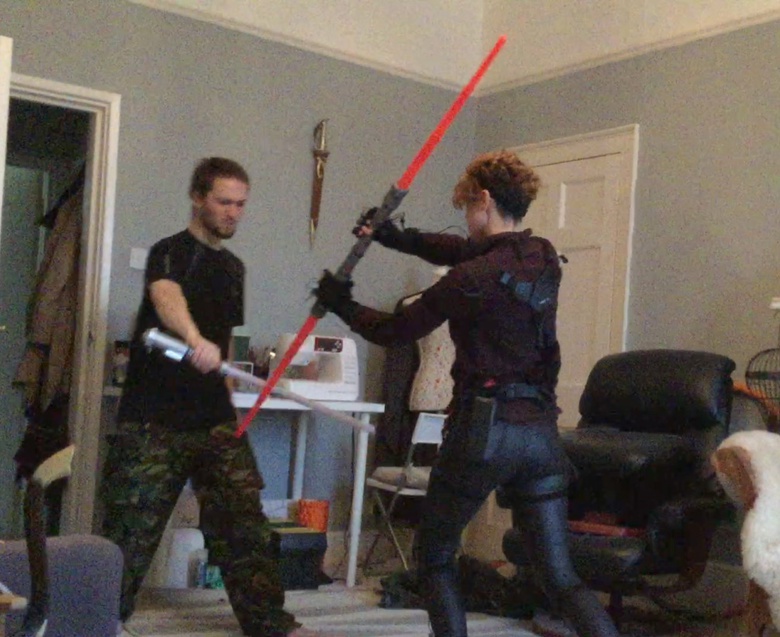 As an example, while capturing the lightsaber combat for Star Wars: Imperials, we used plastic lightsabers so they could actually fight. On a related note, show your actors the environment their characters will be in and anything they'll be interacting with. It will help with their performance if they know what the scene looks like. Direct them like you would a live action movie.

You've just finished recording your character's animation and can watch them perform it by playing the scene. Before you do cleanup or record the next animation, save what you've got. From the Content menu, click the animation button, then custom tab. Right click on Motion, then New Folder. Give it a meaningful name before finally clicking the add button.

Your animation will then be saved for future use and cleanup. Repeat steps 5-6 until you've got everything you need, remove the Perception Neuron suit and store it safely so not to damage it. 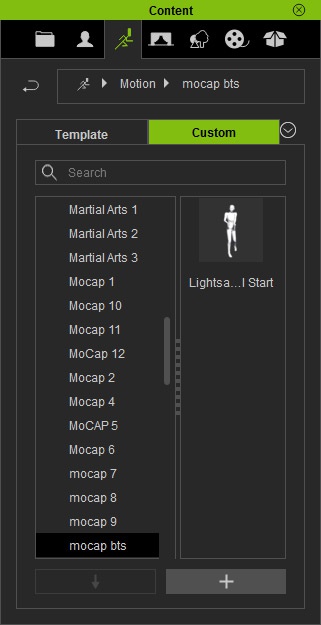 Now that you've got your animations, there will be some roughness, the characters might not move quite the way you wanted and it needs to be cleaned up. This is something even big Hollywood studios with millions of dollars of equipment have to do. Fortunately, it's a fairly straight forward process in iClone. 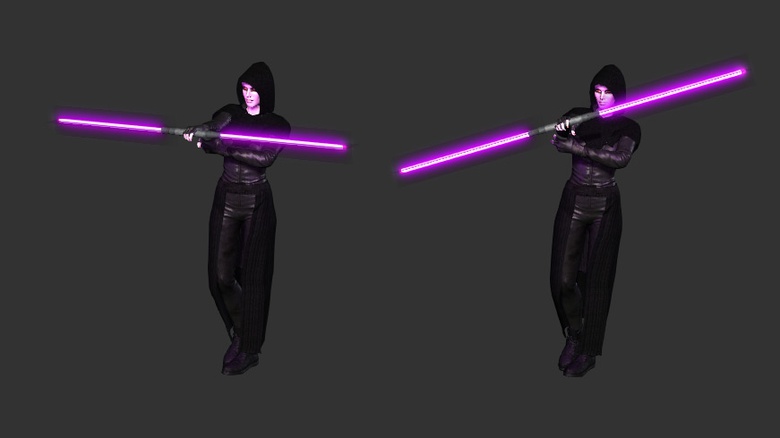 Using an empty environment, place your character and choose the animation you want to cleanup. Watch through and look for any jumps in animation. This will be where your character is in motion, then suddenly jumps forward a few frames. 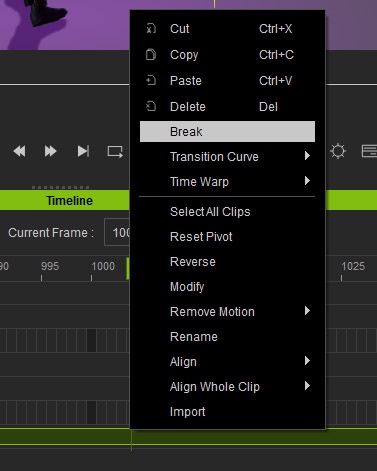 It's difficult to show that in a still image but these are one frame apart and it makes for a very sudden jump when watching the animation play through. To correct this find exactly where the jump is on the timeline, then move a few frames further along. Right click and create a break. 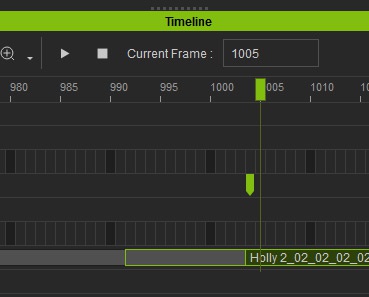 Then you can use the transition slider to smooth out the jumps. Exactly what settings to use depends on how big the jump is, so you'll need to experiment a little and see what looks best.

The other thing you might notice is your character's limbs might not behave quite the way they should, for example, an arm passing through the body. This is also an easy fix. Again, using the timeline, find the last place the arm was positioned correctly, then open up the Edit Motion Layer tool. Click set as default and then default. This creates a marker that saves the exact position of the character in that spot. 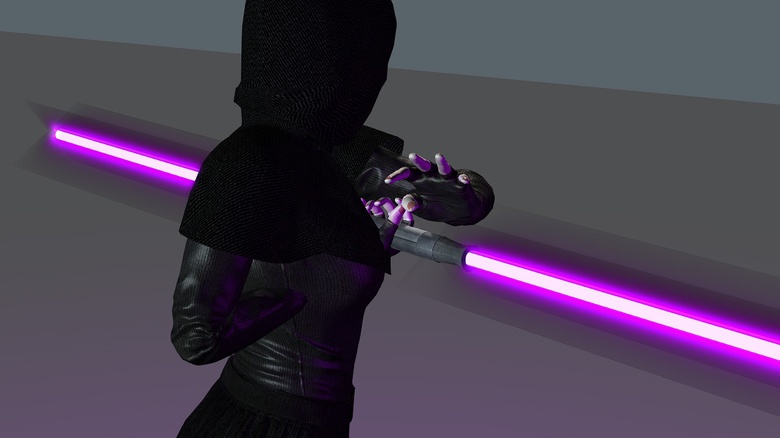 Find the next place the character looks right and repeat the set as default and default button step above. If you can't find a good place after a more than a few seconds, then don't worry, the next step should fix that.

From the first marker, move through the timeline until you're about halfway through the arm's motion. Then, using the Edit Motion Layer tool, correct the arm's position. In most cases that will fix the clipping issue. If it doesn't, repeat this step. When you've finished your cleanup and you're happy with the way your character is animated, save your work using the same process described in Step 7. 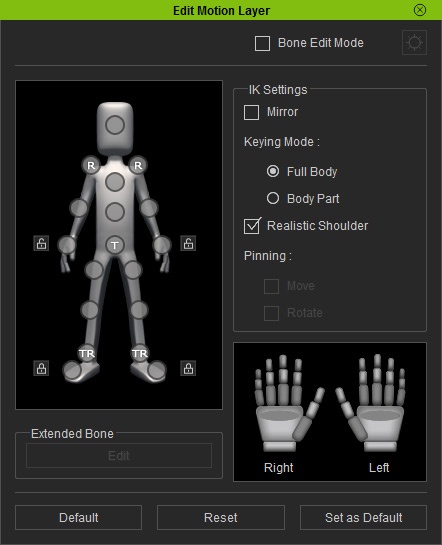 Damien Valentine is an award winning animator from the UK. He has been tinkering with videogame modding and machinima since the early 90s which ultimately led him to telling stories through animation. Check out his YouTube playlist here.

His best known work, "The Death of Jar Jar" was a finalist in the 2007 Official Star Wars Fanfilm Contest and used as part of Star Wars' 30th anniversary celebrations. Since then he has created dozens of short videos and even made a cameo appearance in the popular webseries "The Guild."

He is currently working on the sci-fi webseries "The Chronicles of Humanity" and the fanfilm "Star Wars: Imperials." When he's not busy animating, Damien is a cosplayer and can often be seen at conventions in the UK.