Simon Eckert takes reveals the techniques he used to create an awesome mermaid pin-up, with a dark twist, using Photoshop...

Mermaids and octopodes! Who doesn't like them? And since they happen to share the same habitat why not combine these two beings in a decorative painting with no deeper meaning or elaborate background. I will try to provide you with some insight into my working method from the starting sketch to
finishing touches.

I simply wanted to go for a beautiful mermaid pin-up with a creepy twist to it, accompanied by a giant looming octopus which would form a large part of the background. With these simple ideas in place I began sketching the figure (Fig.01). To create the impression of underwater movement the most important thing was to use flowing, elegant lines and harmonious curves. To draw the viewer into the picture and to create perspective in a featureless environment, I chose to paint the mermaid swimming away from the viewer.

As soon as I was satisfied with the shape of the mermaid, I made a selection area using the Lasso tool and then inverted it. I drew in the rising octopus to complete the composition and fill the background with dynamic shapes. Now that the foundation was set and the composition and shapes were all in place I could start designing and rendering the final image. 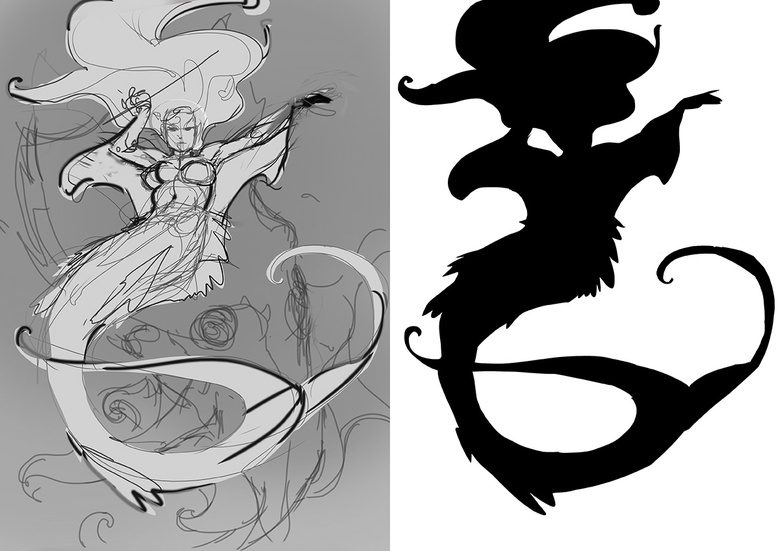 When designing mermaids you can gather inspiration from all kinds of sea dwellers, though I stayed with a more classical design. A very important thing while designing is to keep a good balance between areas which are rich in detail and larger calmer zones to create contrast and keep things interesting to look without becoming confused.

Details are also a very effective way of creating a focus. As you can see most of the detail in this picture such as the starfishes is arranged around the upper body and face. That's because the most important part of a figure (particularly a pin-up) is the face and it's always a good idea to focus the viewer's attention here. The design of the arm fins is not really functional, but the shape simply looked good and helped add to the flowing impression and so I imbued it with a pseudo-functionality.

The first choice I had to make was to decide whether the figure should look dark in front of a lighter background or vice versa. I actually made the decision while I was still designing in black and white and I went with the first option for several reasons. A dark shape pushes forward towards the viewer and I also wanted the mermaid to be illuminated by some soft light from the surface, hence the surrounding water would have to be lighter. I also wanted the fins to be backlit by the pale octopus which would merge with the background to create a sense of depth.

Having established a refined black and white sketch I started adding colors using multiple layers and experimenting with the blending modes until I found a color scheme I liked (Fig. 02). 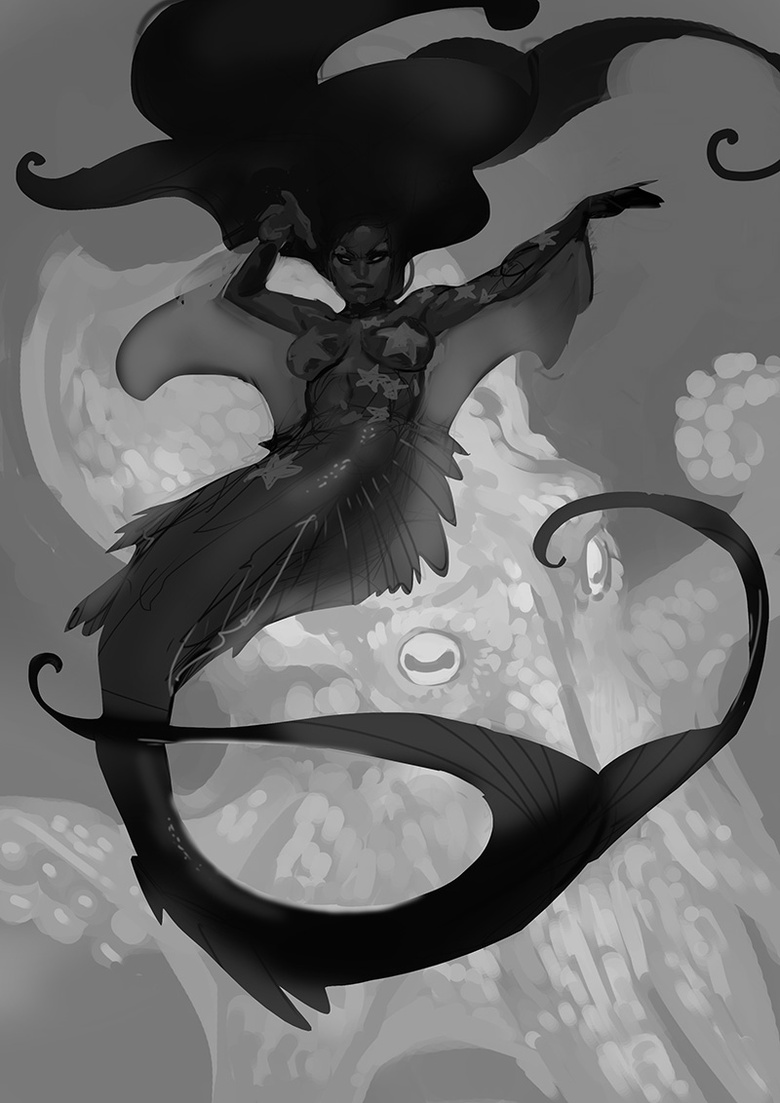 Normally I opt for Soft Light, Hard Light or Overlay as a mode to create the basic color scheme. Using a separate layer for each color makes it easier to make swift changes to the overall color mood and tone. I also create focal points through more saturated colors and brighter contrasts (Fig.03). The Lasso tool proves very useful selecting
specific areas.

I wanted to make the figure really stand out so I separated the mermaid from her surroundings by using warmer, more saturated colors in the foreground and colder, duller colors in the background. I didn't want the octopus to distract too much from the mermaid and so used a smaller range of tonal values to flatten it out and to make it recede (Fig.04).

The shapes, design, color and contrast were all established so I could continue rendering the picture. My rendering technique is a mix of softening down previously sketchy areas with a soft-edged airbrush and defining focus areas and hard edges using a hard edged airbrush (mostly the default PS brush). My first step is always to add a new layer on which I work so I can always hide it and compare my progress with the older version. This way I can check if I have lost some qualities or dynamic lines from the sketch which I should have kept. If I'm happy with what I have done I merge down the layers and from time to time I save a new version to which I can return to if necessary.

For the scales I made a custom brush and used it to paint the reflected light across parts of the tail. I left out the darkest areas and extended the scaly texture with a hard edged brush so it would better fit in and look less artificial (Fig.05). 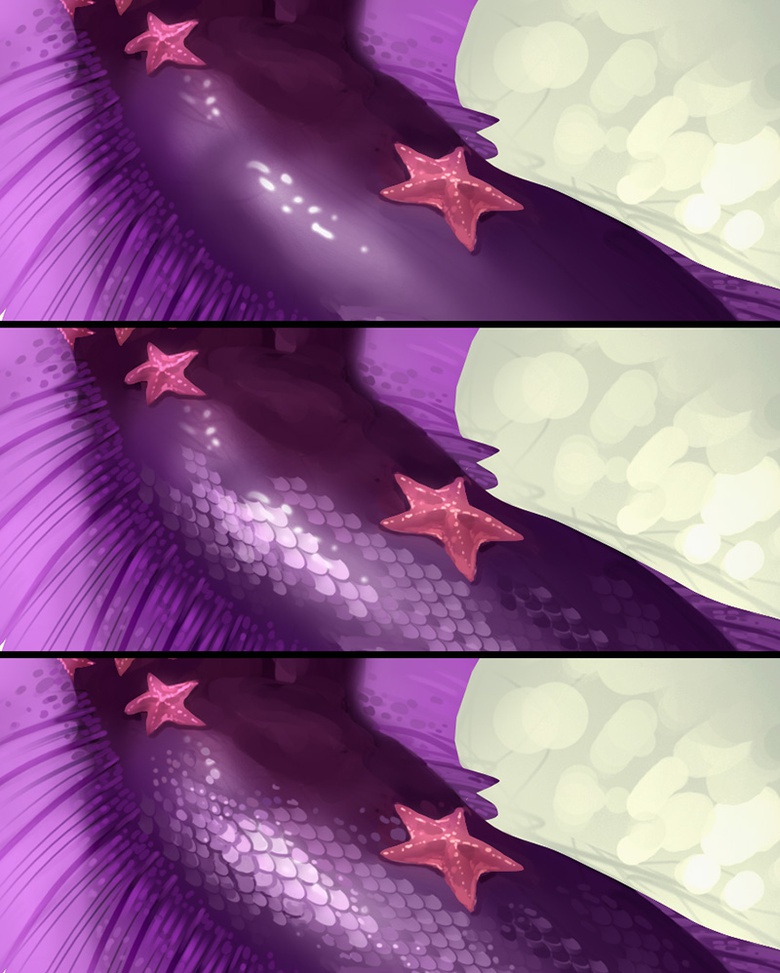 While rendering important areas such as the face it's important to zoom out from time to time to see if it still works from a distance (Fig.06).

Also flipping the canvas helps to see if everything is in place and in proportion. The reason for doing this is because the eye get's used to a picture very quickly and then tends to overlook any distortions (Fig.07).

Having finished the rendering I then added the smaller sea-dwellers on separate layers in case I need to move them around to adjust the composition. I used references for the fish but converted them to a semi-realistic style so they would fit in properly (Fig.08). 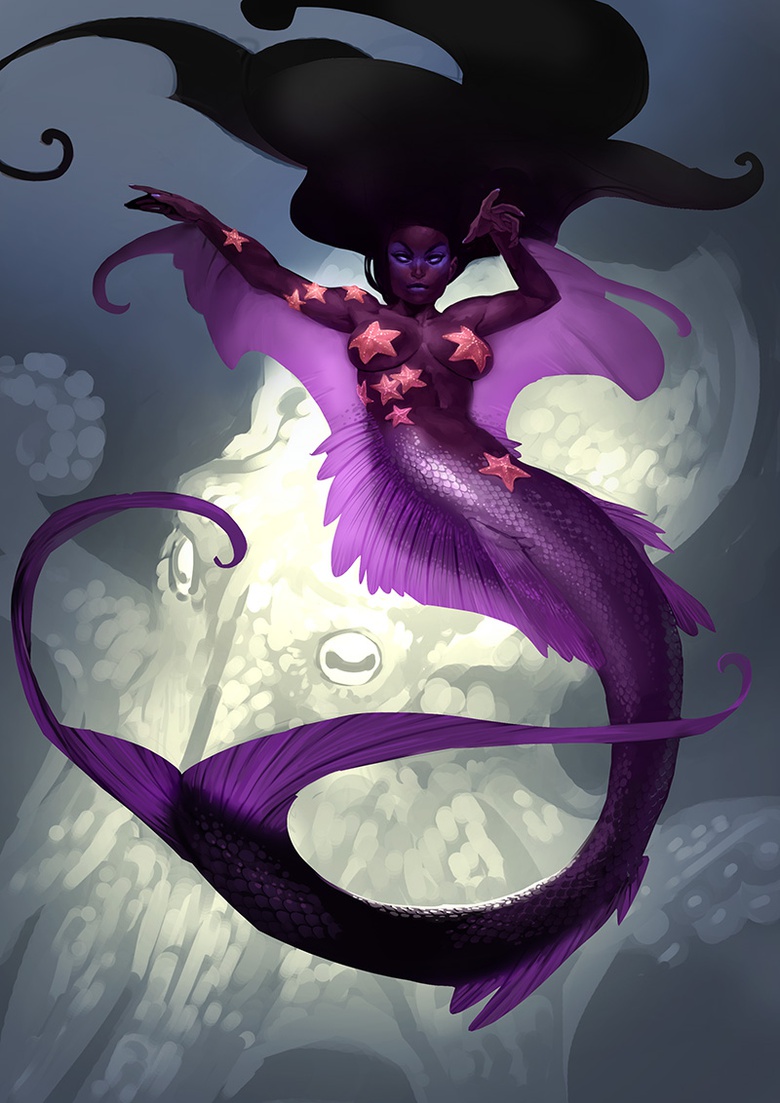 The last steps were to enhance the focus on the mermaid by adding another Linear Dodge layer and to paint along the sharp edges of objects adding detail like the scales on the sides of the tail and softening hard edges left from the use of selections. 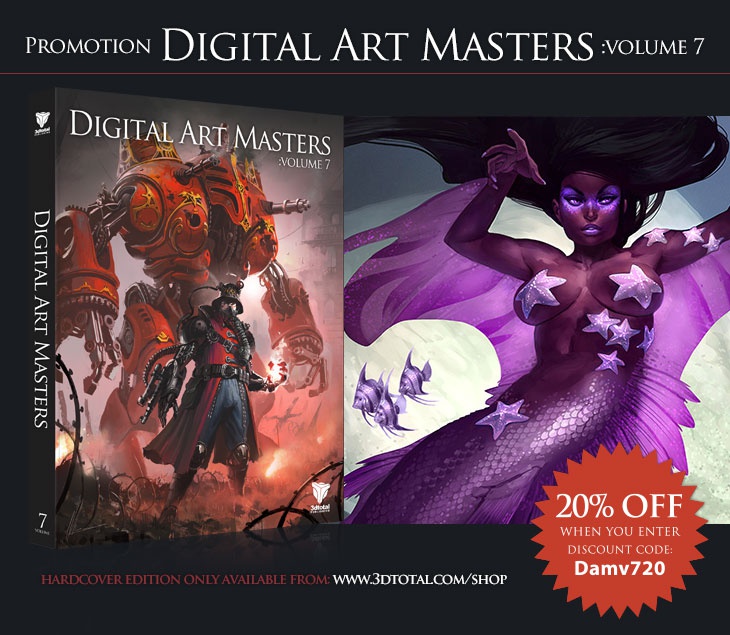