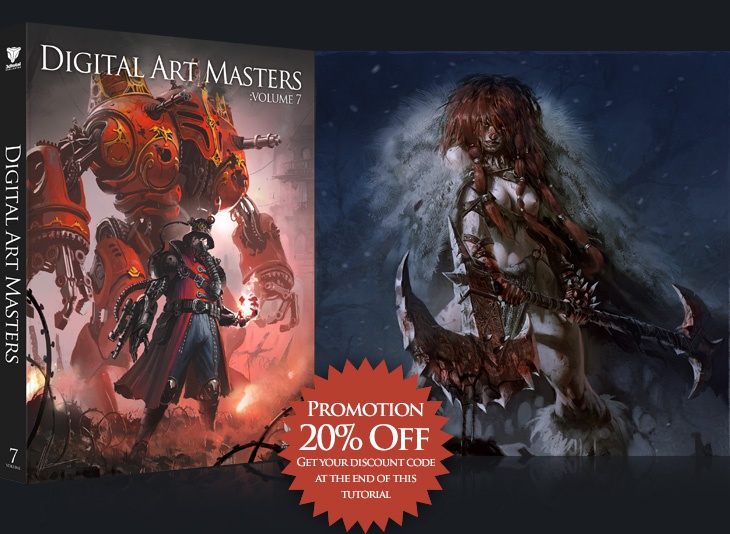 Usually when I start a character painting as a personal project I don't have a clear idea of what I want the image to look like when it is finished. Often I'll just start doodling and the ideas slowly start to form into something coherent over time. You will be able to see this process at work in Fig.01 where you can see that I just started sketching loosely, trying to figure out what I wanted to paint. At this stage I am not at all worried about it looking good, it's more about creating a loose roadmap so I can picture a destination in my mind. I keep the work black and white at this stage as I will add color later on. 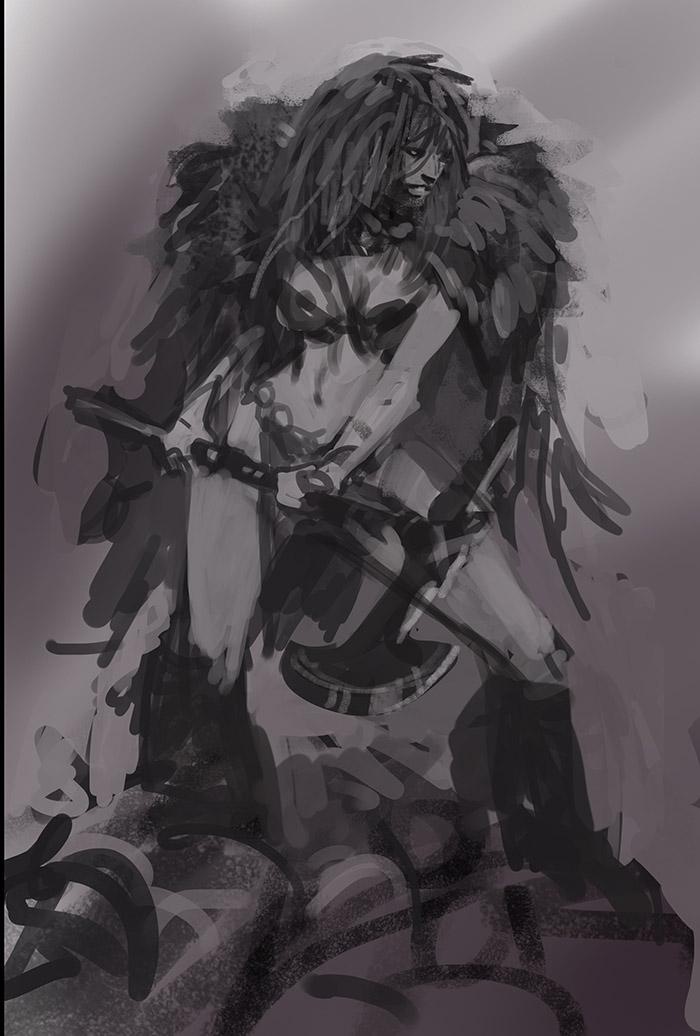 Once I had settled on a direction I began to flesh things out a little bit, adding some color using overlays and color layers, as well as refining the figure. I wanted to establish a good pose as early as possible, so I spent time tweaking her stance and trying to make the weight distribution look right. Although it's possible to make changes to the pose later on, it's much easier to do it at this stage as there is less to re-paint. In terms of color, this is really just a base to work off and you'll see me push and pull the colors around throughout the process until I get something I'm happy with (Fig.02). 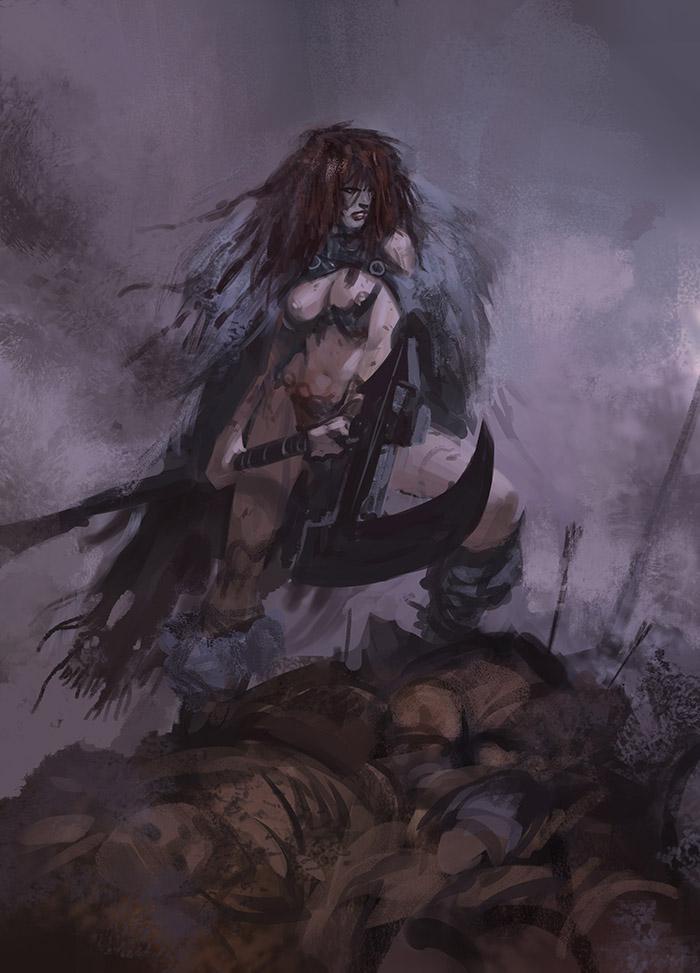 In Fig.03 you can see that I continued working on the posture and decided to turn her head to have her engaging with the viewer a little more. I also started to flesh out her costume design a little bit. She's a Barbarian so I want to avoid anything too refined and dainty looking. I wanted to make sure that the costume design reflected the attitude I was trying to portray. I also wanted to make sure that compositionally the costume elements worked together and reinforced one another. This will become clearer as the painting progresses. 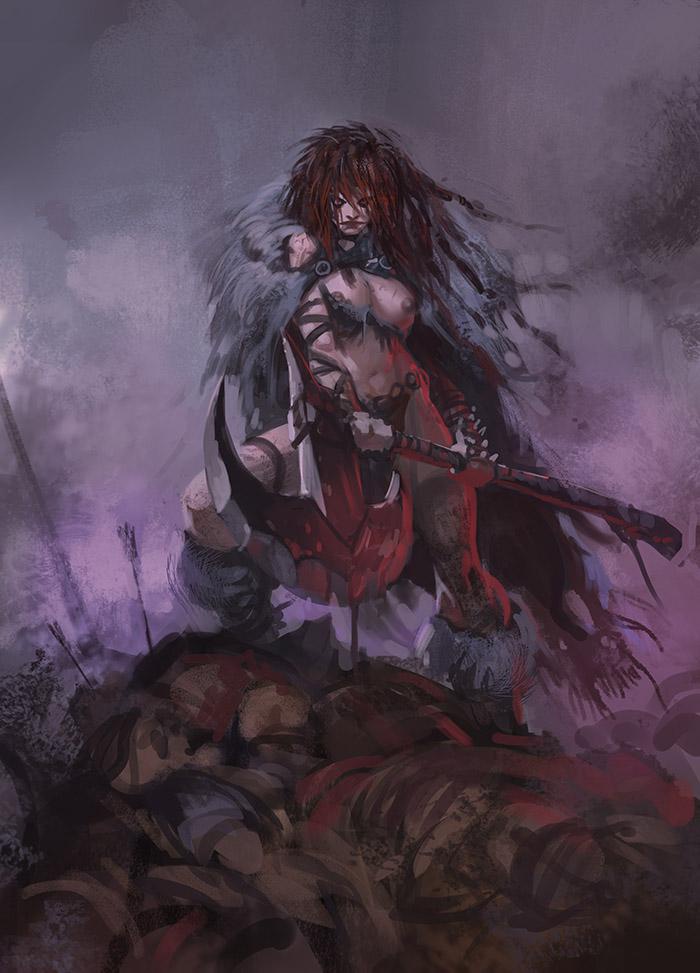 I often use a Frazetta trick when doing a painting by flipping the painting upside down. When I do this it should still look pleasing in an abstract way. I did this as well as mirror the image many times throughout the painting process. This helps you see the image in a new way with fresh eyes and helps you spot problems that would have previously gone unnoticed. I'm careful not to flip too much though, as this can lead to you subconsciously balancing the composition too much, removing some of the dynamic tension (Fig.04). 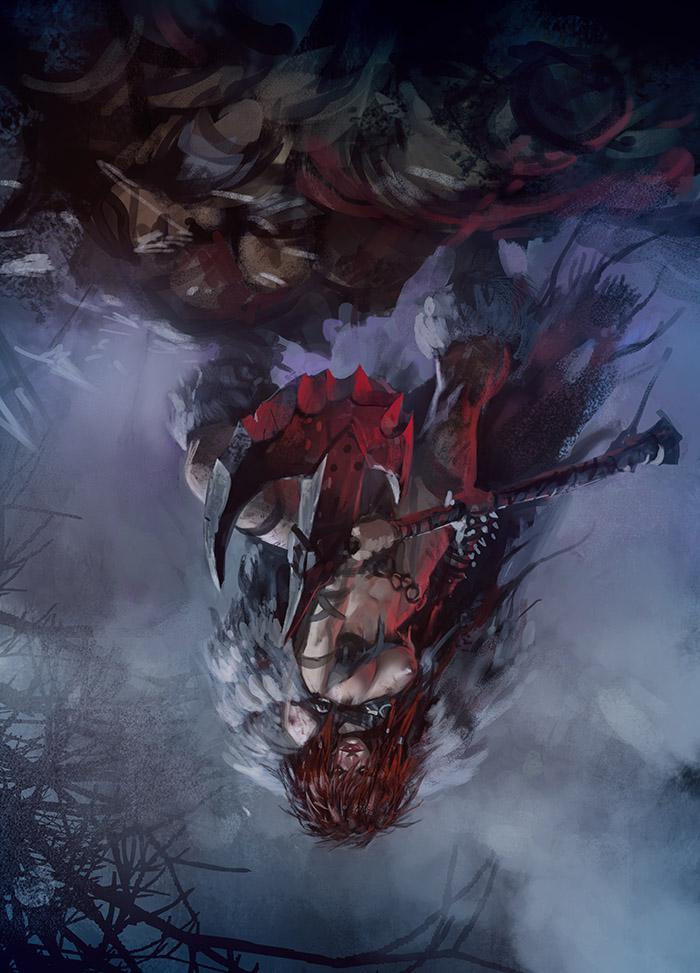 The character was then scaled up to fill the frame more as I wanted her to feel imposing and indomitable and she was just too small in the previous composition. Now she felt larger than life and much more heroic. The colors were also starting to gel at this point. I wanted to offset the reds of the character with a cooler background, helping to project the character forward. The red suggests anger, action, and danger, all the qualities I wanted the character to channel to the viewer. I still hadn't committed to the lighting one hundred percent which is why a lot of the painting is still looked very loose. Once I was really satisfied with the lighting I started to paint the details (Fig.05). 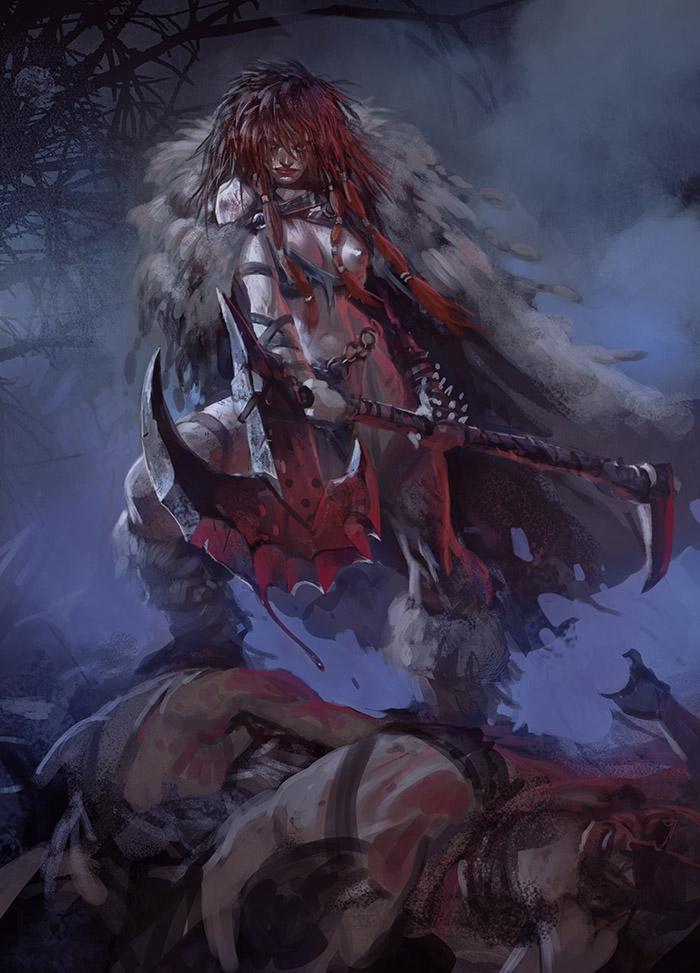 Slowly I started to refine the painting, especially in focal areas such as the upper body and the head of the axe. I tried to bear in mind where I wanted the viewer's eye to go as these are the most important parts of the painting and would receive the most detail. Areas that were previously just blobs of paint had to be thought through a little bit more. What kind of surface am I painting? How weathered is it? How is the lighting affecting it and is it casting shadows? These are all things that ran though my head as I painted the image (Fig.06). 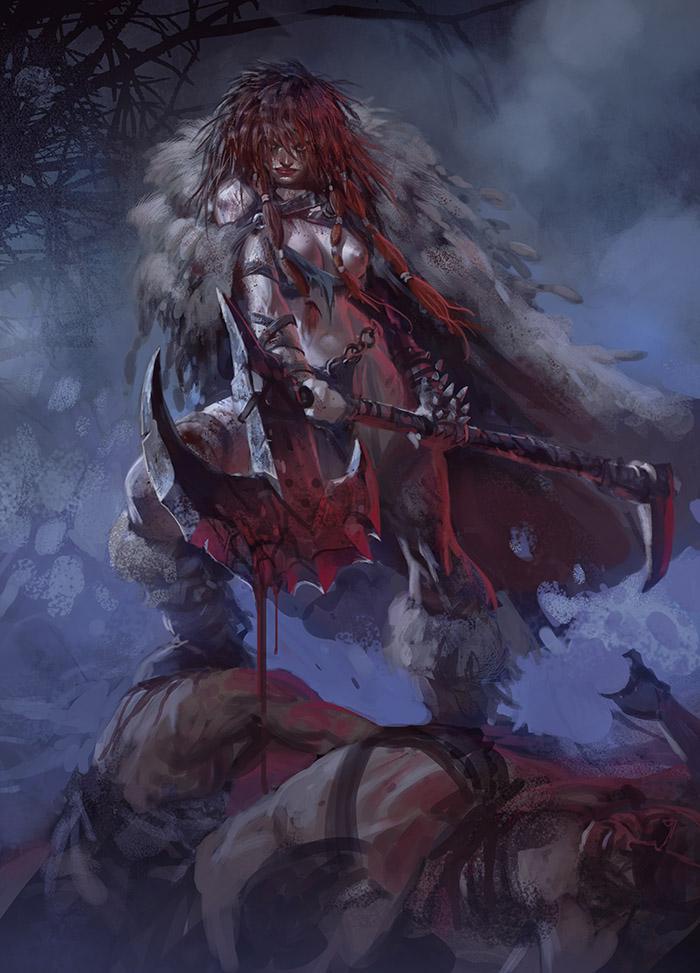 In Fig.07 you can see that I made more adjustments to the color and tone, as well as the pose. I felt the right knee was competing with the axe too much and that moving it back would make the pose feel more dynamic. This also helped bring the axe forward in space towards the viewer. I started to play with the background elements, adding in some simple branches as compositional elements, trying to create some interesting angles between the tree branches and the axe. 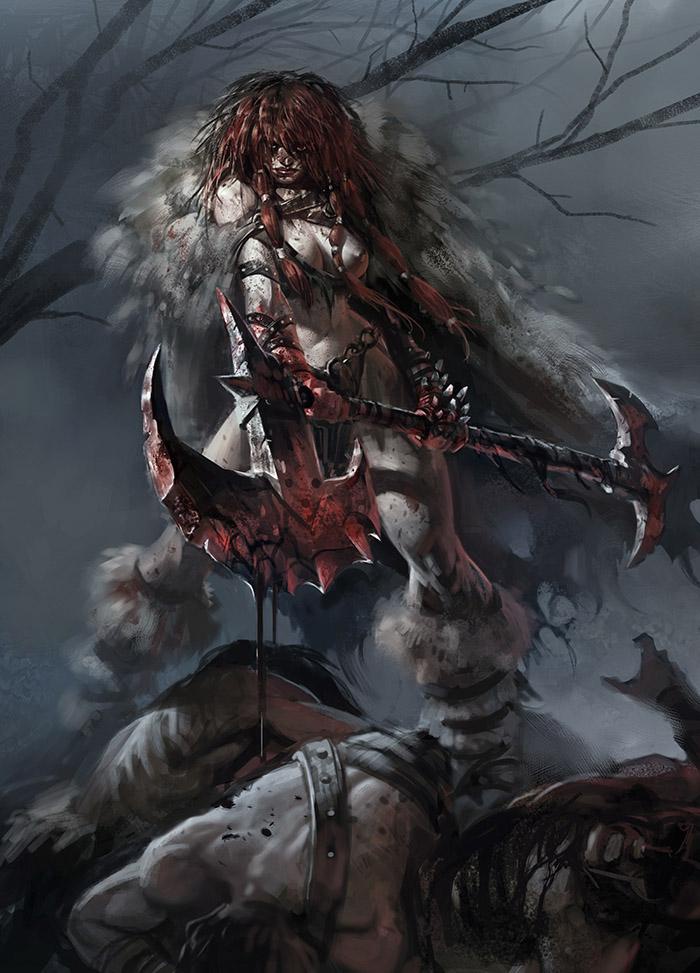 The almost finished piece that you can see in Fig.08 contains more little details. You can also see that at this point I had paid more attention to the materials. At this final stage it's all about nailing the focal points and adding small details and touches here and there to make it sing. I was painting much slower at this point, constantly evaluating every stroke and trying to make the details really count. I also subtly adjusted the value and color balance of the painting in an attempt to strike the exact mood I was looking for. After several hours of detailing and minor adjustments I called it a day . 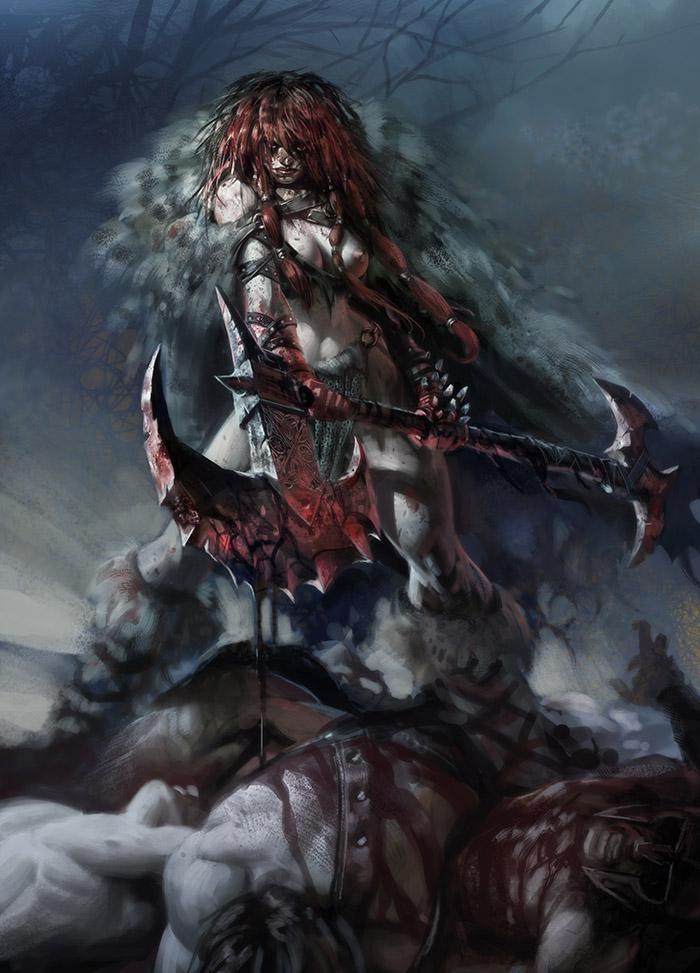 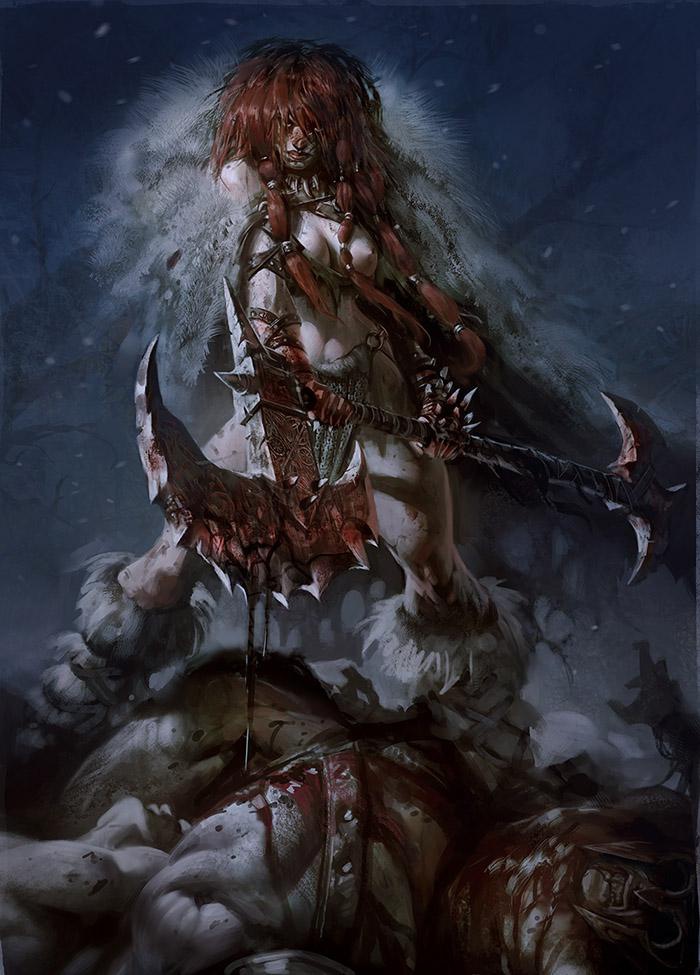 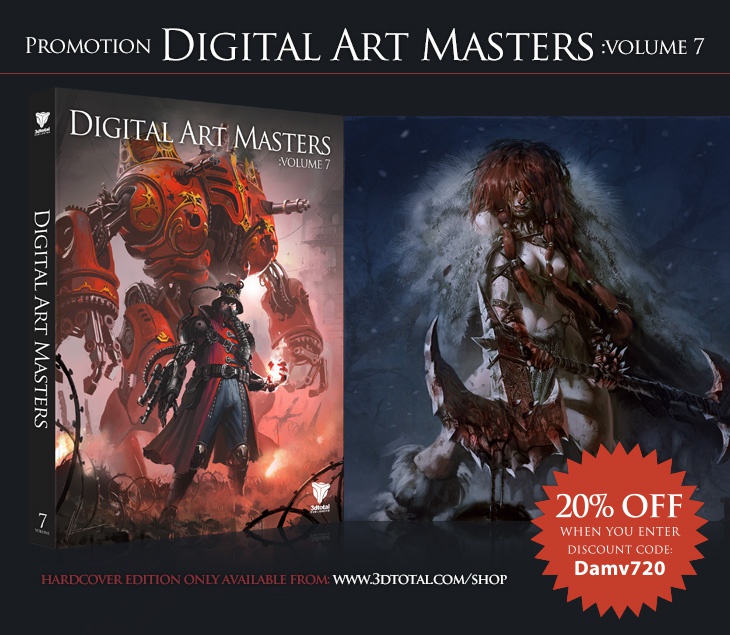