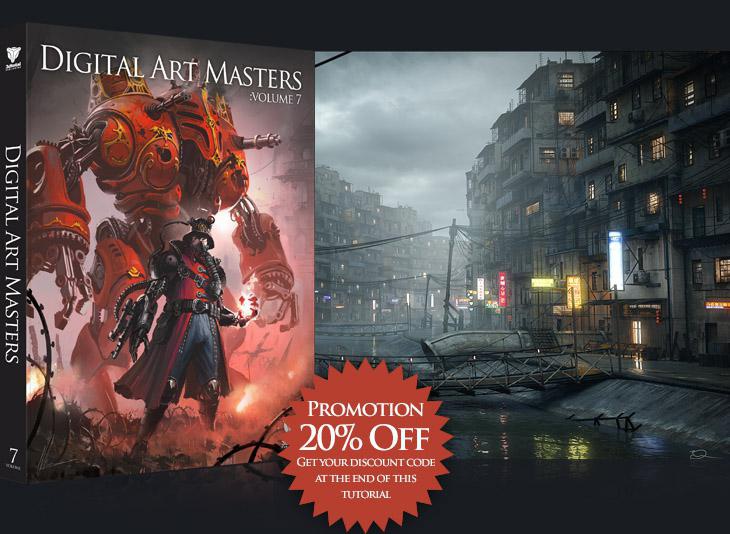 By starting off with a sketch I immediately knew I wanted to create something old, dirty, grimy, urban and somewhat "sci-fi-esque" that was vast in size and scale. This led me to the Kowloon Walled City in Hong Kong. This is a well know place, so finding references was quite easy. I immediately fell in love with its size, scale, weathering and the amount of detail.

The modeling process for this piece was simple. Low res building facades were poly modeled in Maya in a modular way. Once the model was complete the UVs were laid out, one per object. External pieces such as window frames, hanging deck pieces (over and under), air conditioning units and pipes were also modeled in low res. I knew I would be relying heavily on textures and the paint-over so I did not get too involved when modeling the details (Fig.01 - 02). 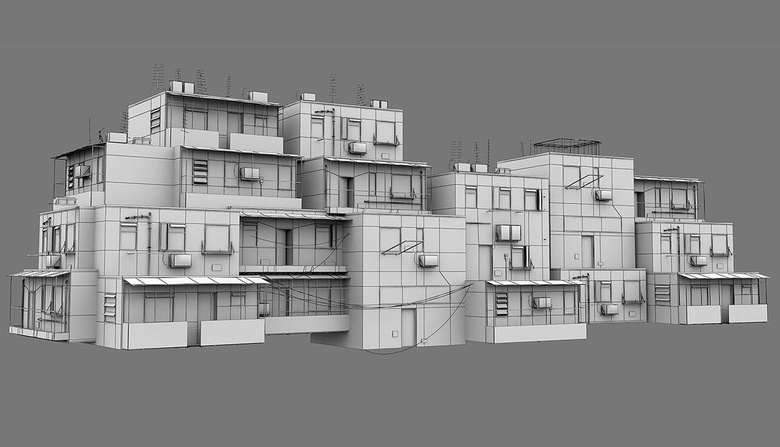 For this piece I used around 20 different 1k and 2k texture maps. Each texture has its own Specular and Bump map, so around 60 maps were created for the entire piece. With this number of different shaders and texture maps, it is critical to keep everything properly named and organized (Fig.03).

The shaders were set up with the basic V-Ray power shader. The Diffuse component was made from painted and color corrected photo-based maps, primarily collected from CGTextures.com. The Reflection component utilized a grayscale Specular map piped into the Reflection and Rglossiness slots. Reflection was used with the glossiness turned down (around .95), Fresnel reflections turned on, IOR based on the material properties and the subdivisions around 24-36 (always in powers of 12). The Bump component was also a grayscale, high frequency image used on all the shaders (Fig.04 - 05). 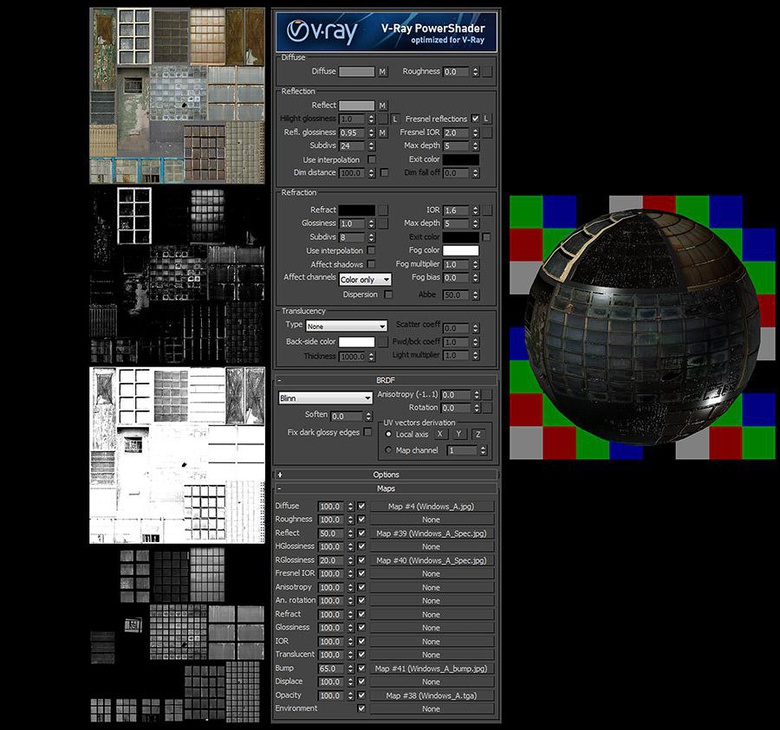 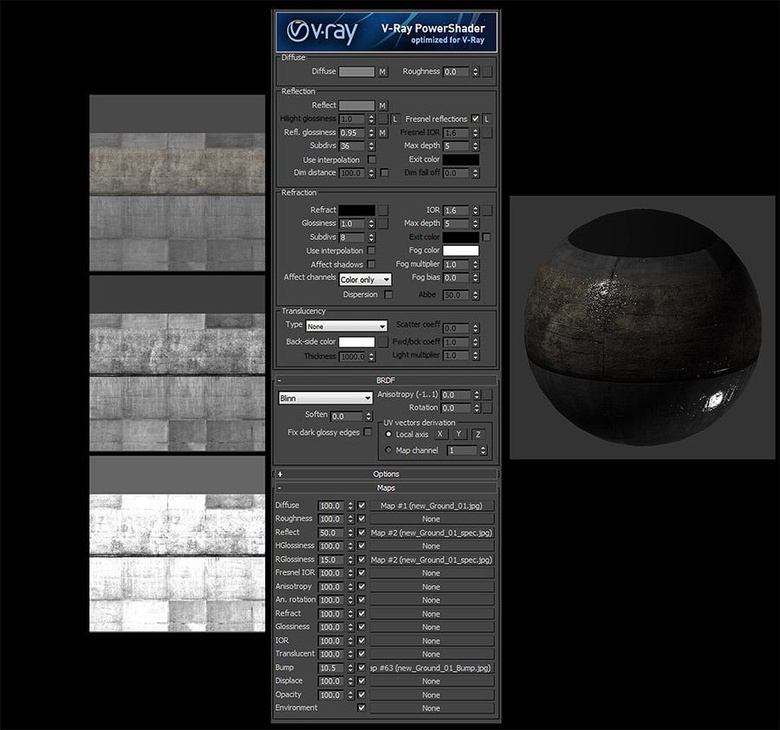 One of the problems I ran into with this project was the large number of individual objects. Since everything was modeled independently and in a modular fashion, this allowed for hundreds of thousands of different assets. Max and Maya don't really like this, so once everything looked good on an independent asset level, I merged them together by material type and began creating layers based on these materials. The layout began on one side of the river, with all of the wires and junk attached. I then mirrored and flipped it, moving some things around to create interesting shapes. These were then duplicated and moved down, and everything was grouped together. I applied a Bend modifier to get a suitable curvature to the buildings (Fig.06 - 07).

In my first concept I explored a few different lighting scenarios. I had my mind set on a somewhat strong key light coming in from the left of the screen. I really liked the raking shadows, warm sky and happy mood (Fig.08).

The only problem with the sun representing a key light is the aspect of the neon signs and windows. I wanted to include dominant pools of light cast from doorways, windows and the signs, but unfortunately this created an unpleasant juxtaposition in the image. I eventually decided to kill the sun light and pop in a cool and stormy Environment map instead. I then started adding neon glows coupled with window and doorway light (Fig.09).

By using the rule of thirds my goal was to focus the eye at the mid-left center of the image (the bright area with the neon signs). From there I hoped to lead the viewer back and to the right, following the wires across the water to the other bright area and then trace the bridge back to the original focal point. Using the rule of thirds together with the arrangement of the structures and lighting, I created a loop for the viewer. The idea was to create a continuous loop where you would pause and study the details a little more each time. As the artist I wanted to keep you (the viewer) sucked in as long as possible.

With Final Stand I knew I would need to render out more than just a beauty pass, but was also aware I would have to be sensible. Consequently I rendered out a beauty pass which included all the lights, Z-Depth and Ambient Occlusion. I got quite a bit out of my three render passes, added a sky and tweaked some levels and contrast. With that as my base, I started to overlay some grime and dirt textures, added a glow on top of the neon signs and dabbed in a little more atmosphere.
The final step in Photoshop was color balancing. With this piece I tried a few different color options, but found the blue/cyan color worked the best. Although I really like the warmer yellow feel, the cool blue with the neon signs just seemed to fit (Fig.10 - 11). 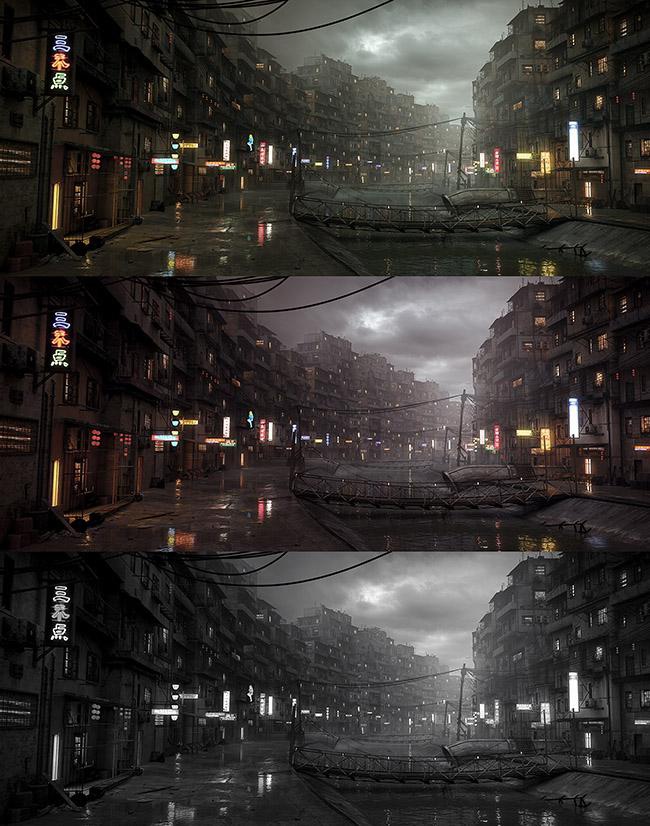 I love personal projects; they allow us to use complete creative freedom and to show the world what we can imagine. 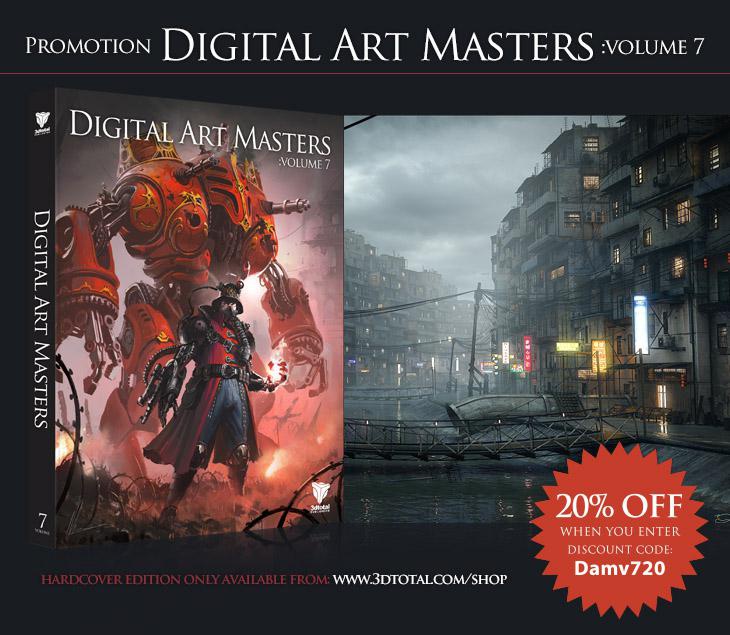