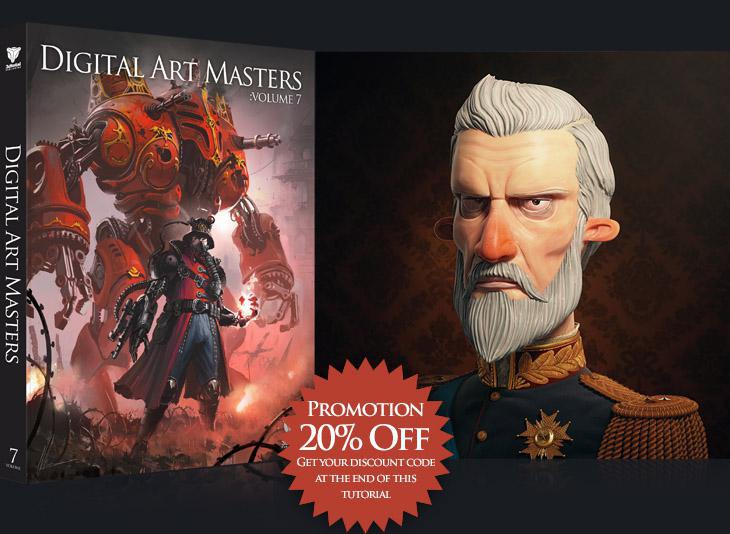 The original idea for this image came to me while looking for a name for my online portfolio, Brunopia. I wanted to create an imaginary land with its own history and characters, so I came up with a general as one of them.

Fig.01 shows the original concept for this image. It was drawn while watching TV late at night a long time ago and I completely forgot about it. A year later while I was looking for a cartoon character to create and add to my portfolio, I decided to take a look at my sketchbook and pick an image. Personally I prefer to draw my ideas and then look for references to avoid getting too influenced. The final step before I started modeling was to gather some images of classic portrait paintings and images of generals. 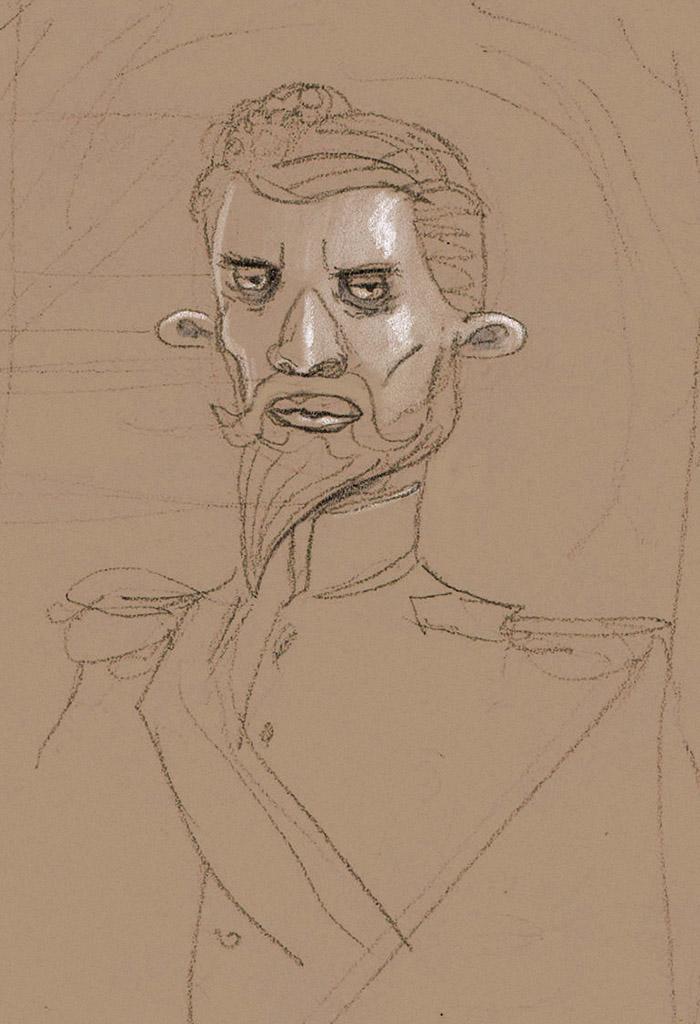 I always start a character by modeling the head as it is usually the funniest part of the image. Also, if the face and expressions are good it is easier for me to stay motivated to complete the project. I used ZBrush from the start to nail the personality as quickly as possible. When I'm creating a still I don't worry about topology, so I usually begin modeling from ZSpheres and then subdivide the model to add the detail (Fig.02). I always start by using the Clay Tubes brush to build the main forms, which I then define using the Hpolish and Dam Standard brushes. 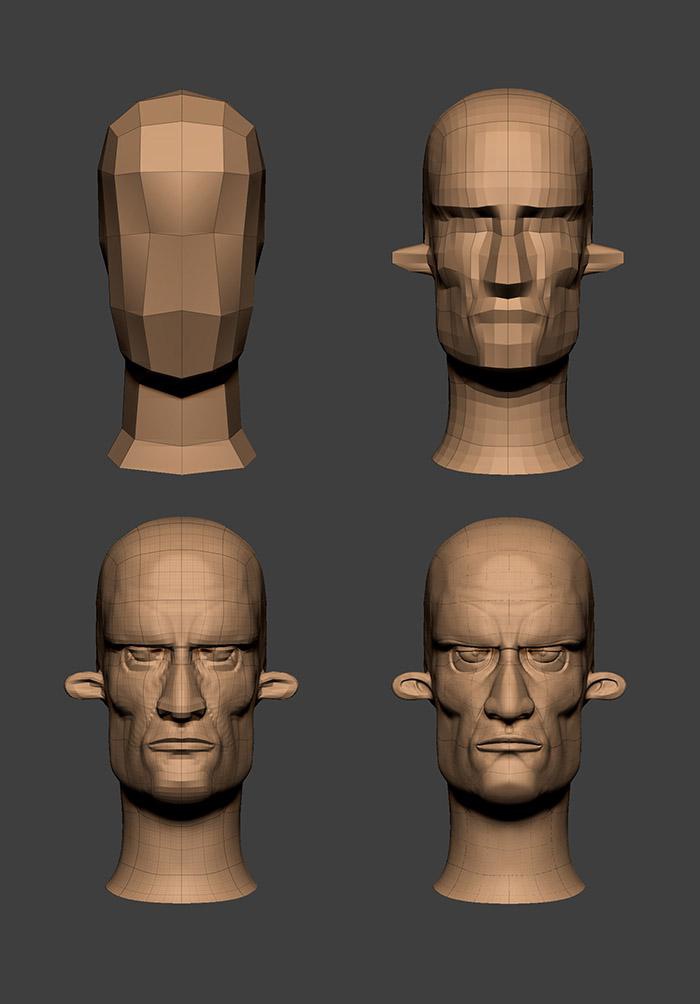 For his costume and accessories I decided to use 3ds Max. After creating some pretty basic volumes and clean UVs, I went into ZBrush to start adding detail (Fig.03). 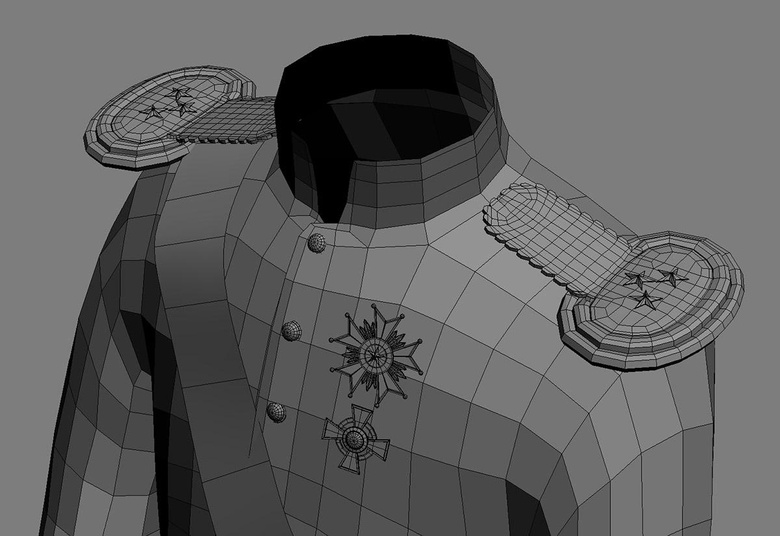 The most difficult part of the project was the shoulders. For this I had to create multiple alpha brushes within ZBrush (Fig.04). After a few minutes of trying to sculpt all the details directly into the mesh with my custom alphas, I realized that it was way too hard to get the result I was looking for and so decided to build my Displacement map piece by piece in Photoshop (Fig.05). For the tassels I just drew a spline and used an Edit Poly modifier to add some subdivisions. I then used a Twist modifier and finally a Push modifier. After putting every strip in place I used an FFD modifier to make each tassel look different. For all the other complex golden objects I used the same method as I described previously (Fig.06). 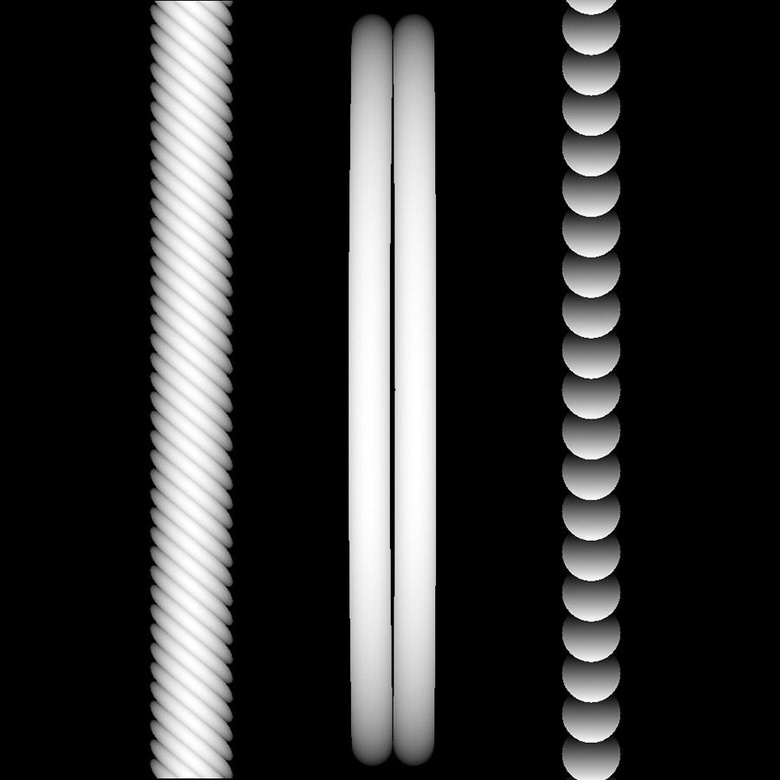 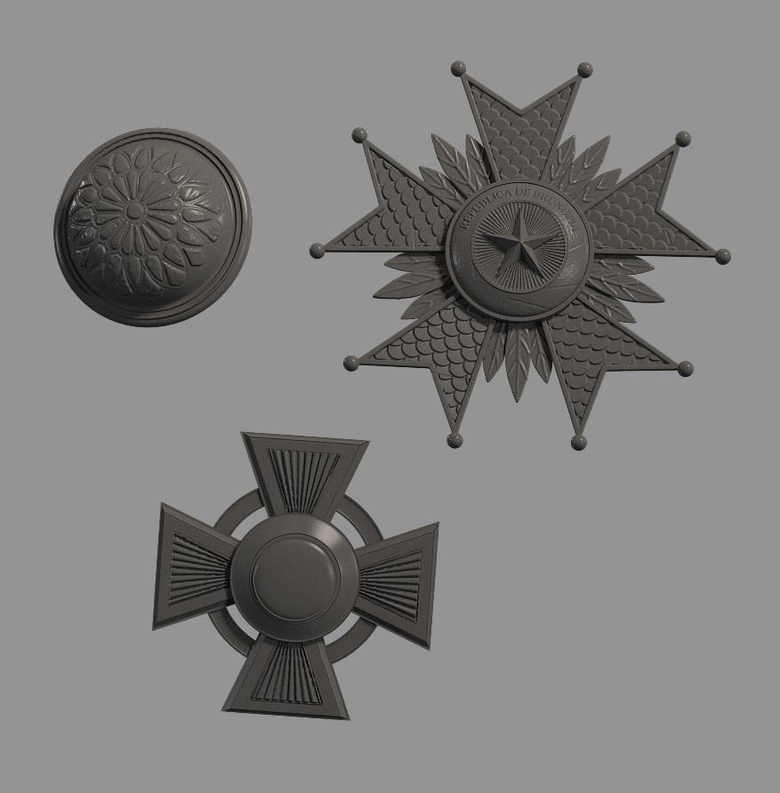 Since I just wanted a still image, I didn't waste time organizing the topology of the head and hair. After deleting my three lower subdivision levels, I created the UVs using the incredible UV Master in ZBrush. Then I decimated the meshes to export them into 3ds Max with a Cavity map for each mesh.

I was aiming for a handmade and stylized look for the face and hair, and in this instance used the Barontieri set of brushes. I tried to keep it fast and loose, making strokes and spots visible in the final texture (Fig.07). I then used an SSS2 V-Ray shader with the brown skin preset. 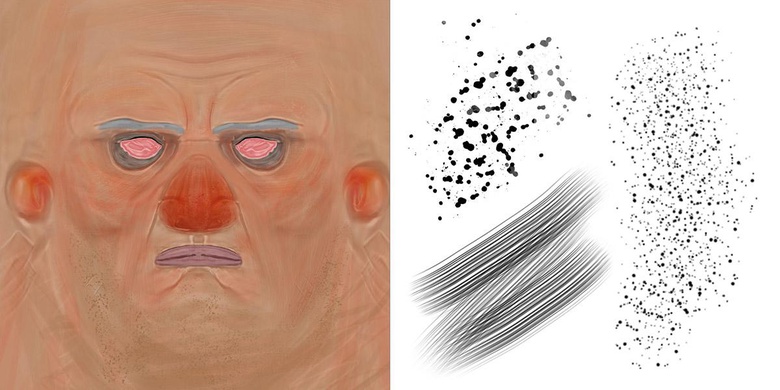 I wanted to create a contrast between the face and all the accessories, so I decided to texture and shade them in a more realistic way. For the jacket I used a VrayMtl shader with a wide falloff in the diffuse slot. I then placed my Diffuse map in each falloff slot. Using color correction in Photoshop I created a desaturated and brighter version of the Diffuse map, which I then put in the second slot. I customized the falloff curve to give the jacket a very soft look (Fig.08).


For the accessories I made some quick textures with color, brightness and contrast variations to create a more interesting look (Fig.09). 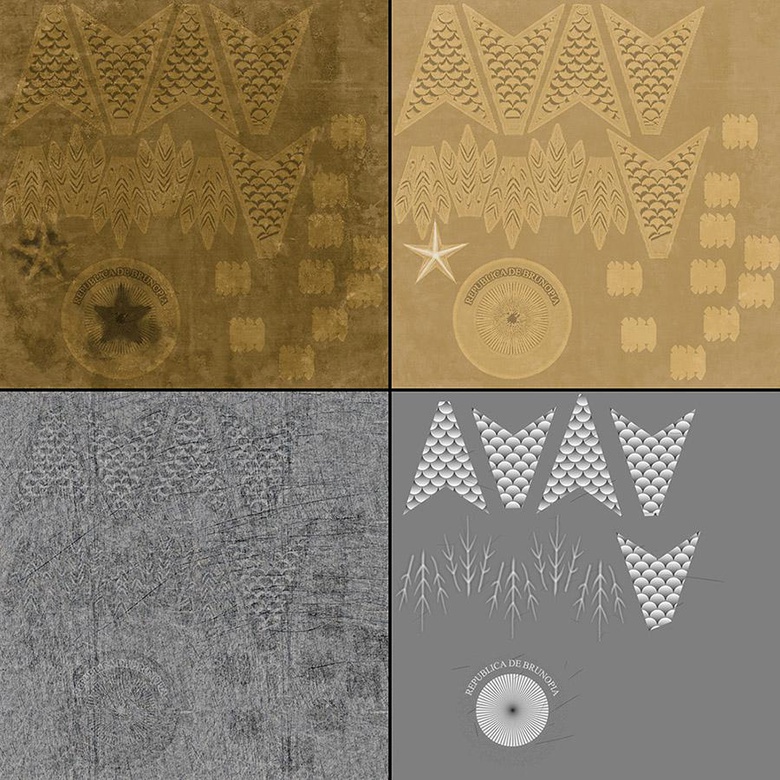 I wanted the lighting of the scene to accentuate the character's severe and harsh appearance, so I opted for something resembling candlelight rather than strong, harsh studio lighting. To create this I used a small light source with high directional values and gave it a slightly orange tint. I used a common three-point lighting set up for the character and then added one extra light for the background (Fig.10).

An HDRI map was added directly to the environment slot in the shaders to achieve the reflections. It's funny to think that I spent a lot of time doing the lighting, when it's actually very simple. Whilst setting up the lighting I was inspired by some of Rembrandt's portraits. 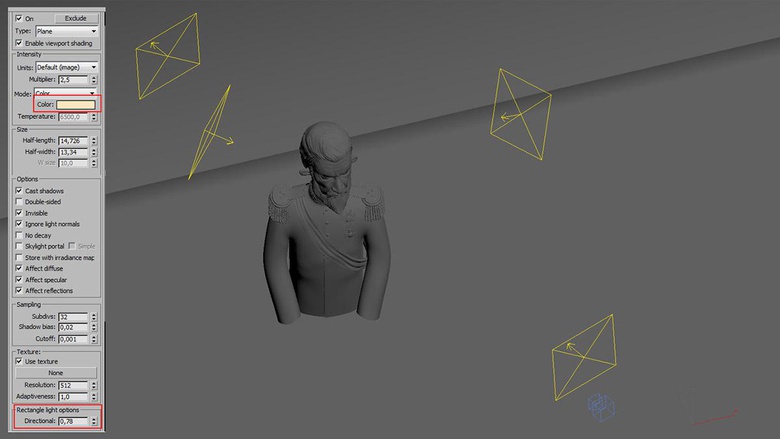 I always save most of the render passes and then select those that I consider useful. For this project I used a shadow, specular, reflection, AO, falloff, Z-Depth and wire color pass to allow more control. The reflection, specular and AO passes were mainly used for metallic objects. After adjusting the Levels and making some color corrections I added some volumetric lighting, vignetting and a bit of blur courtesy of the Z-Depth pass and Lens Blur filter in Photoshop. And with that, the image was finished. 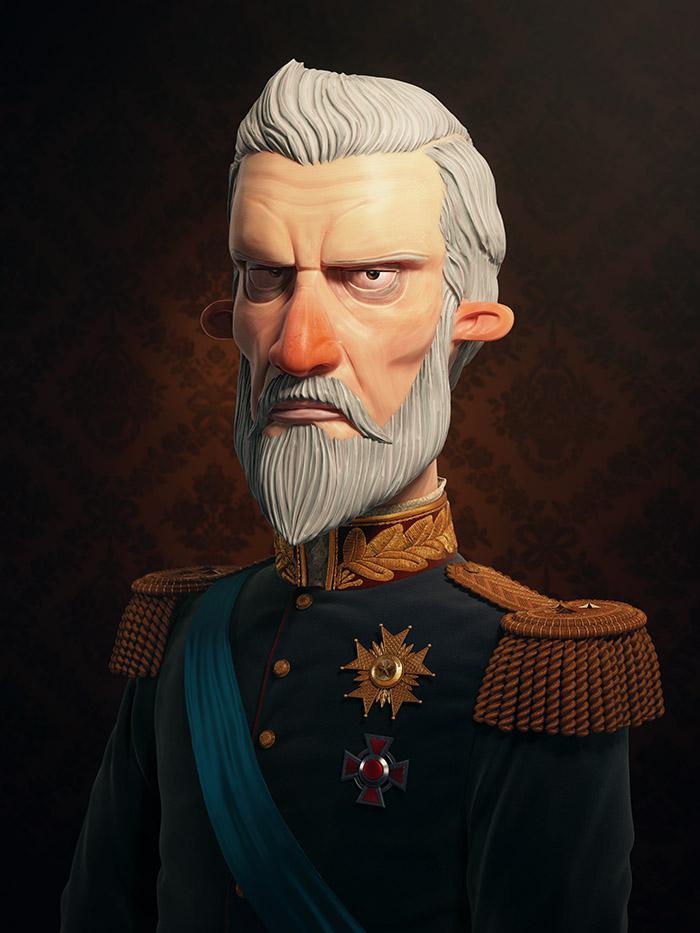 This piece was an exercise and a way to find my own style. After receiving lots of nice comments from the CG community in different forums, I feel very encouraged to continue creating my own designs and ideas. I dedicate this image to all of the artists that have inspired me since I started learning CG, especially Marek Denko and Krishnamurti M. Costa (aka Antropus). 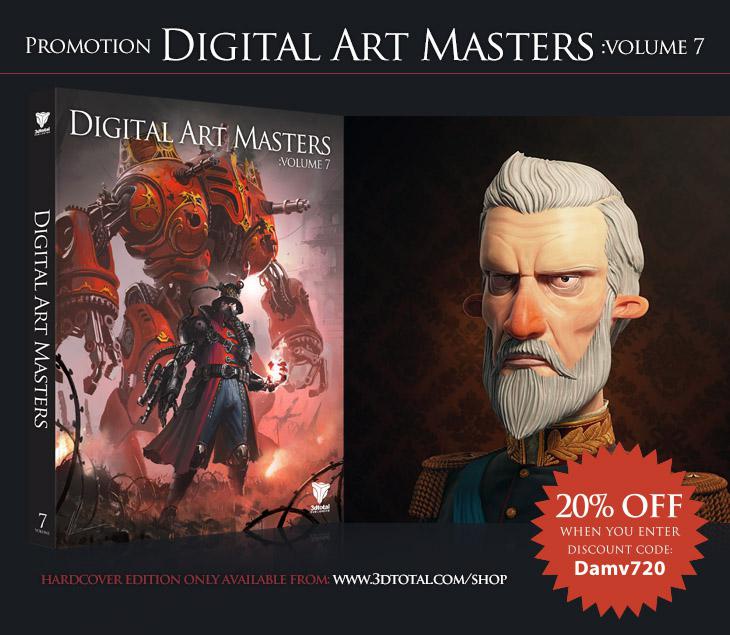