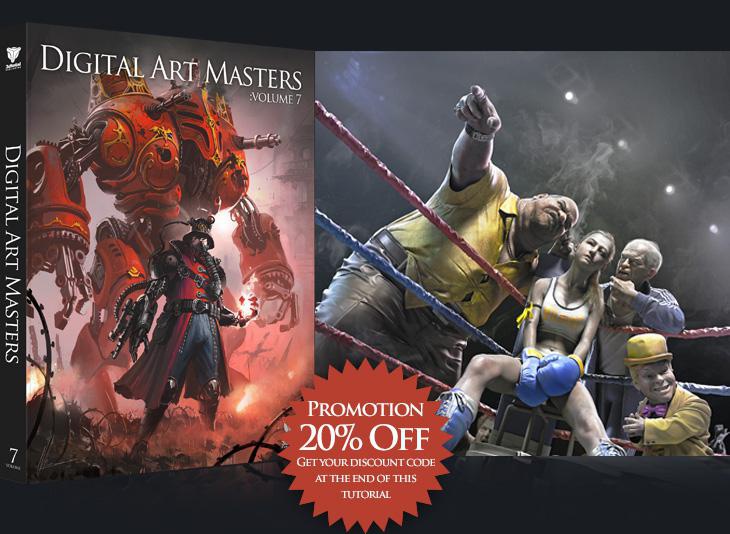 In this image I wanted to express a feeling. I wanted the main character to look like she was under intense pressure but tenacious, unyielding and always willing to stand up and fight. The process that I used was not a standard process. As I was focused on the final appearance of the image I avoided normal routines in an attempt to capture the personality of the characters. I started by thinking about the camera angle and by coming up with a basic concept sketch (Fig.01). I then created a simple base mesh for the characters that I could then adjust in ZBrush (Fig.02). 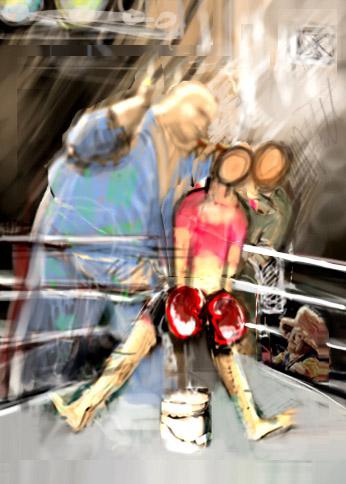 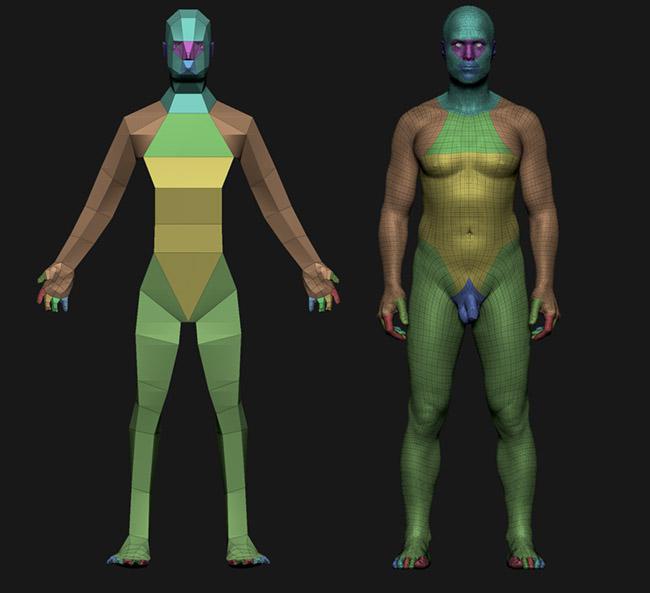 Having a good idea about what you want to do is an important part of the process. I spent some time thinking about the way I wanted the final image to look. To help me do this I gathered a selection of references for the characters and the overall theme of boxing. I also took some photos of myself in the poses that I wanted to use (Fig.03). 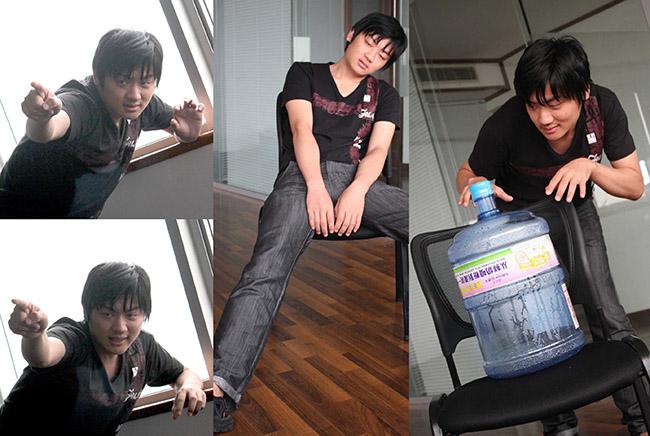 In order to improve my efficiency I decided not to make any more base meshes and instead used ZBrush to create the characters from scratch (Fig.04). This is a really interesting way to do things as you are not as limited. As each subdivision level reaches its capacity for detail I sub-divided the model improving the detail step by step. During the early stages of this process the model was created with Symmetry turned on. 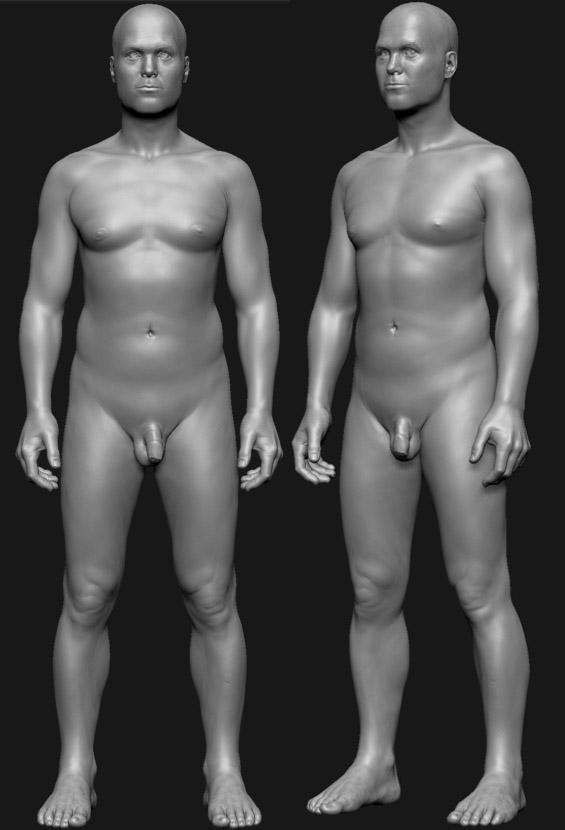 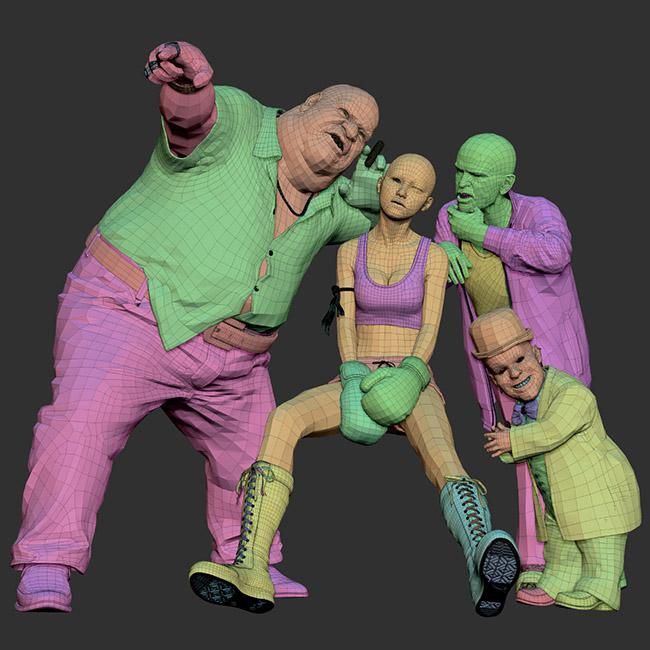 My main rule of thumb when modelling adheres to the principle of using square rather than round models to begin with. Similar to sculpture, these characters are carved from the same model following the principle of first looking at local areas and then going back to the overall volume and repeating this step i.e. carving out the larger sections and then working down to details from the bones through to muscle, blood vessels and so on (Fig.06 - 09). 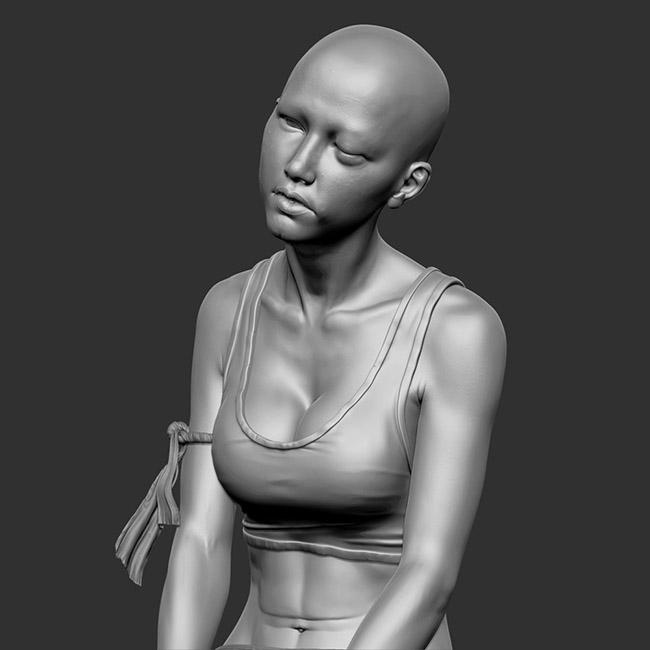 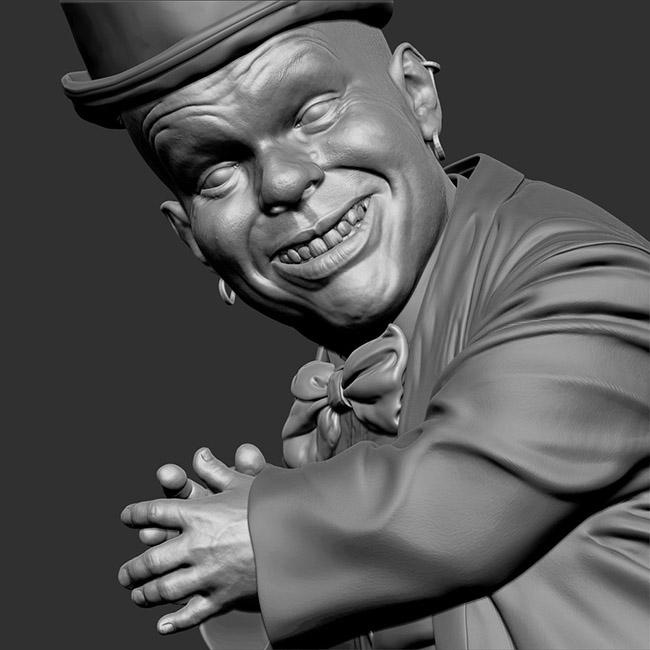 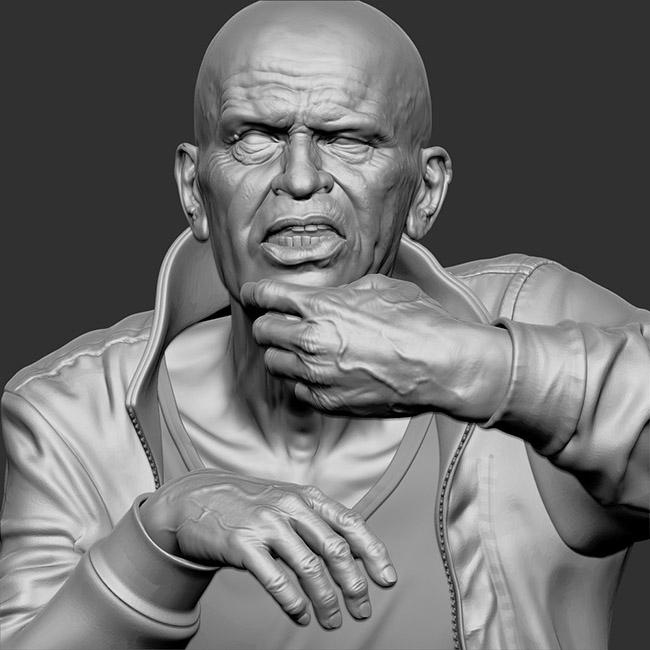 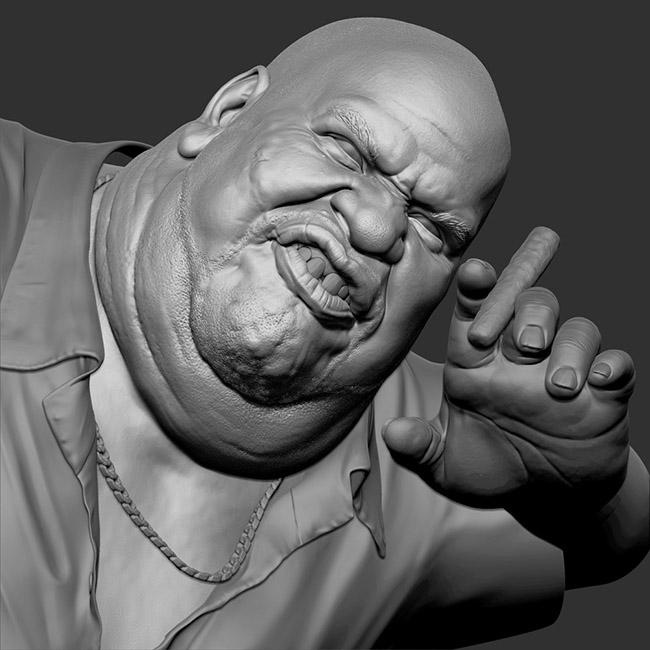 I used 3dsmax in conjunction with PolyDraw to organize the topology as it is important to pay attention to the placement of three, four and five sided polygons! If you are not careful the mesh will result in an unreasonable number of overall faces. I then use UV Layout to acquire the UVs which is very fast.

The texturing is a very important part in the process, and a rich texture will add much to the model with the key being to use a variety of colors to create a rich sense of volume and light throughout the mesh. To achieve this all of the maps are hand-painted and adjusted until satisfactory. When painting the Diffuse map I try not to pay attention to shadows and lighting because it affects the rendering. However at the same time it can help darken the recesses and lighten the brighter areas, generally adding contrast and emphasizing the details across the model.

The lighting is a very interesting aspect, which heightens the atmosphere and plays a vital role. It is worth noting that in order to more quickly and accurately render the test lighting, I applied Mental Ray materials to the entire scene (Fig.10). Due to the nature of Arch&Design; materials, I turned off the highlight reflectivity and avoided using a pure white. I then used Mental Ray to do a test render. 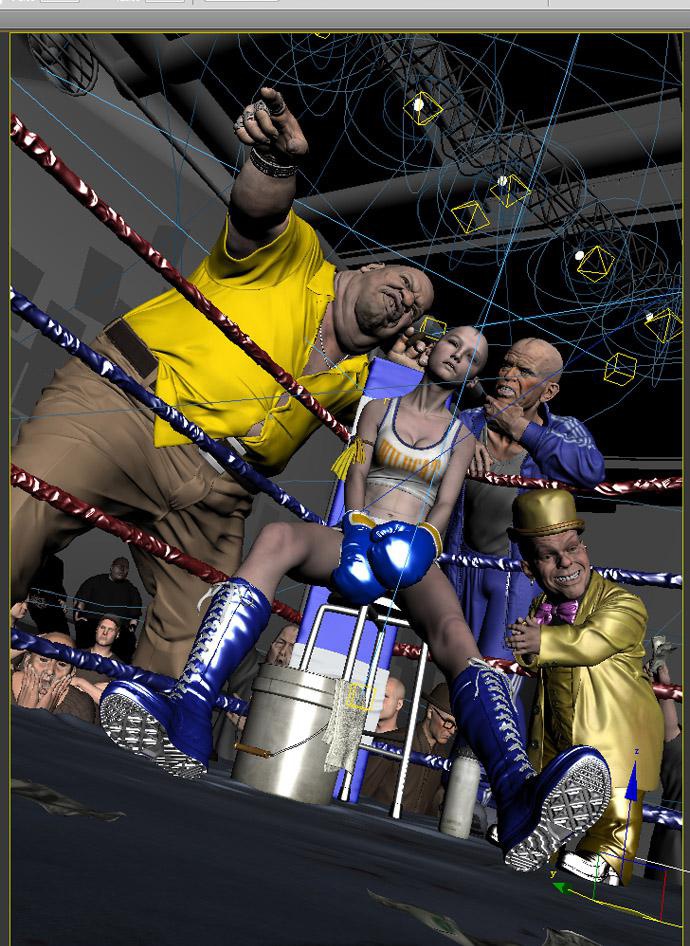 There are usually two ways to choose from when rendering, one being layered rendering and the other involving an overall rendering. Both have advantages and disadvantages, but to increase productivity, I test rendered specific layers, e.g. testing the lighting in relation to the unit measurement which could be in millimeters, centimeters or inches and sometimes need the use of auxiliary objects as a measuring gauge. The depth of the characters skin has an intrinsic relationship with the lighting.

As a final result I wanted a photographic quality and so added a Lens Blur and darkened the corners to help focus on the visual center in the form of the female boxer. Color correction was very useful and indeed necessary to expressing the sensation of an underground ring. To do this I reduced the saturation to create the smoke-filled room and also took advantage of Fume FX effect to calculate the smoke. Once again I rendered the edge light to heighten the sense of volume and then composited everything in Photoshop (Fig.11). 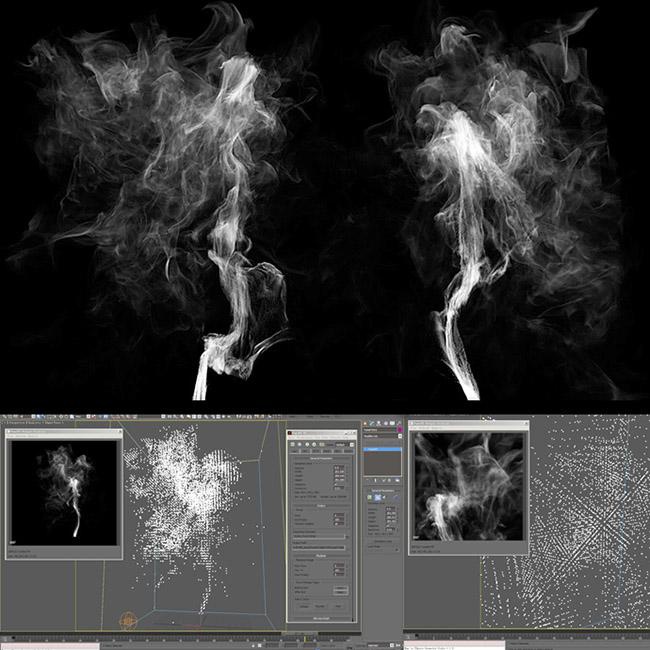 I enjoy the fact that each idea requires its own process, and the associated problems these raise. When an idea cannot be perfectly realised it requires repeated deliberation and reflection, often resulting in numerous tests. Art comes from life and if ones ambitions are artistic then life will become the relentless pursuit of an artistic outlook. 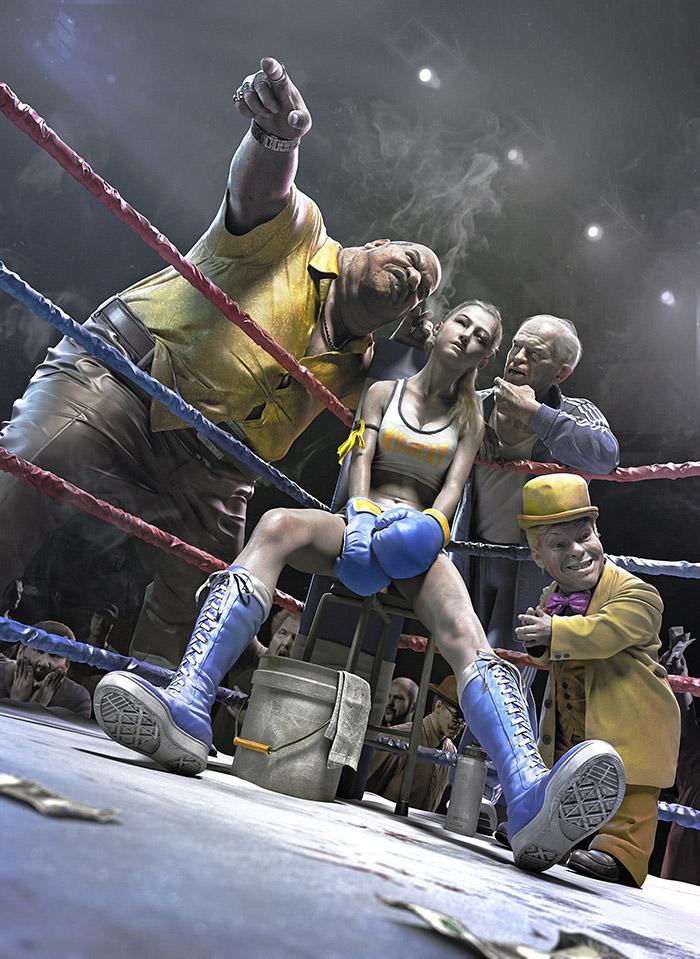 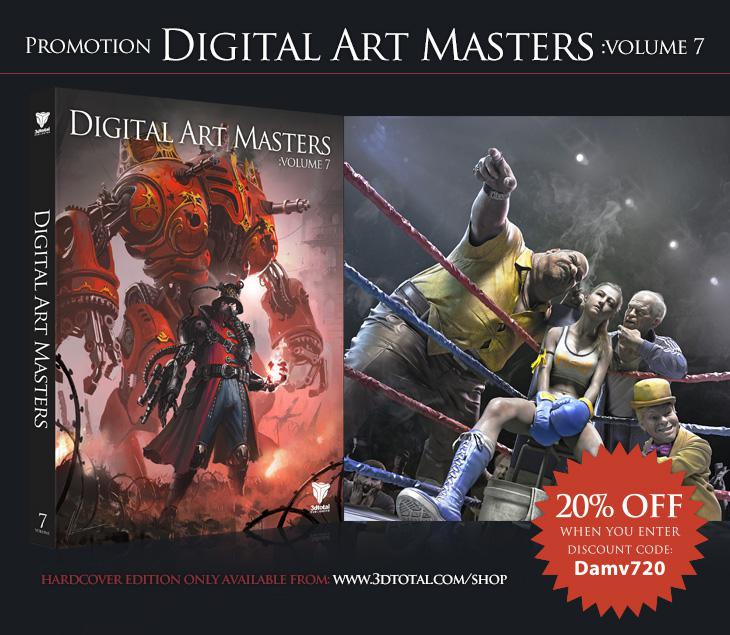